The saguaro cactus is a long-lived icon of the Sonoran Desert, but some researchers are wondering how the desert species will fare in the hotter, drier climate of the future.

A new study, led by former University of Arizona researcher Susana Rodríguez-Buriticá, analyzed data compiled over 48 years that included information on more than 5,800 saguaros on Tumamoc Hill, an 860-acre ecological reserve owned and operated by the UA in partnership with Pima County. The research team found that small changes in the hill’s landscape might help protect saguaros from the impact of climate change.

“This was an ambitious but highly valuable undertaking, since these plants can live for over 100 years,” said co-author Daniel Winkler, a U.S. Geological Survey research ecologist. “As a result of the long-term data set, we’re able to identify how saguaro populations have been maintained over time and predict how they’ll likely respond to future climate change.”

The study recorded changes in saguaro populations over three time periods, allowing the team to analyze how fluctuations in climate affected growth over time. The data provided information on how each saguaro changed individually, as well as how the population changed as a whole, specifically with the creation of new saguaros, which is known as “recruitment.” In addition to climate conditions, researchers also studied differences in saguaro growth across the hill’s north, south, east and west slopes.

Larry Venable, co-author and director of research at the Desert Laboratory on Tumamoc Hill, said having data that spanned 48 years was crucial.

In previous research, changes in saguaro populations were largely attributed to climate, and the team confirmed that saguaros thrive during wet periods but are particularly vulnerable during extended droughts and extreme freezes. However, by studying how climate interacted with subtle variations in the landscape, the team found some unexpected patterns.

“What we found with this 21st century data is that saguaros are responding somewhat differently to the climate. We’re having an increased number of days with extreme temperatures, both hot and cold, and it’s been getting warmer and drier,” Venable said. “In old data, recruitment was more likely to occur in favorable conditions that included low drought and above-average precipitation. In the more recent decades, recruitment has been more likely under less favorable conditions, like high drought severity and low winter precipitation.”

For example, saguaros typically grow in larger numbers on the south- and east-facing slopes because they tend to be warmer and receive direct sunlight.

On Tumamoc Hill, however, the south and east slopes are particularly steep and rocky, meaning water retention is too low for saguaros to take hold. Alternatively, the north-facing slope, which typically receives less sunlight, has deeper and richer soil, allowing it to retain water. As a result, saguaros could establish on the north slope as well, even in years when the desert is hotter and drier than normal.

This particular study did show that the north-facing slope experienced a large spike in new saguaro growth, even during years with high drought severity and many extremely warm days.

This is the first study to show large saguaro growth occurring with unfavorable conditions. According to Venable, saguaros behave differently on different slopes and the diverse distribution of saguaros across the hill could protect them from harsh environmental conditions as they come.

Although the study shows promising results when it comes to saguaros and climate change, according to Venable, researchers are still seeing an overall decline in saguaro growth.

“Our data shows that the saguaros at Tumamoc Hill have been declining and are continuing to decline,” he said. “If it continues to get hotter and drier with more freezing, that’s probably going to continue into the future.”

Even with recent growth and the unexpected birth of new saguaros on certain slopes, it’s not enough to compensate for the death of saguaros across the hill.

Saguaros have also become threatened by other exotic plants in recent decades, including buffelgrass, an extremely flammable and invasive grass species. Since 1994, buffelgrass has increased by 300% in the Sonoran Desert.

Because plants like saguaros live for so long, Venable and Rodríguez-Buriticá emphasized the importance of a long-term data set to study the plants’ physiology and population over time. Even with local threats and steady decline, they say the saguaro isn’t going away anytime soon.

“It’s not like all of the saguaros are going to die all together,” Venable said. “It’s a very long-lived plant and has episodic recruitment. It takes a long time to wipe them out and a long time to bring them back.”

Monsoon awakens after nearly dry July, will be playing catch-up rest of season

July brought in about an inch of rain as of Wednesday afternoon, which is low compared to its normal 2.25 inches.

They’ve arrived later than usual and in lower numbers.

Photos of the 2019 monsoon in the Tucson area by the Arizona Daily Star photography staff.

Thanks to release of treated effluent at 29th Street, water will flow year-round in the Santa Cruz River west of downtown Tucson for the first…

A 43-year-old motorcyclist was killed in a crash on Tucson's east side Saturday afternoon.

A man died in a single-vehicle crash in Tucson's east side early Saturday, officials said.

Using genetic data from over 1,100 species, the team helped to create the most comprehensive evolutionary tree for green plants to date.

Invasive species one of the biggest threats to desert ecosystems. 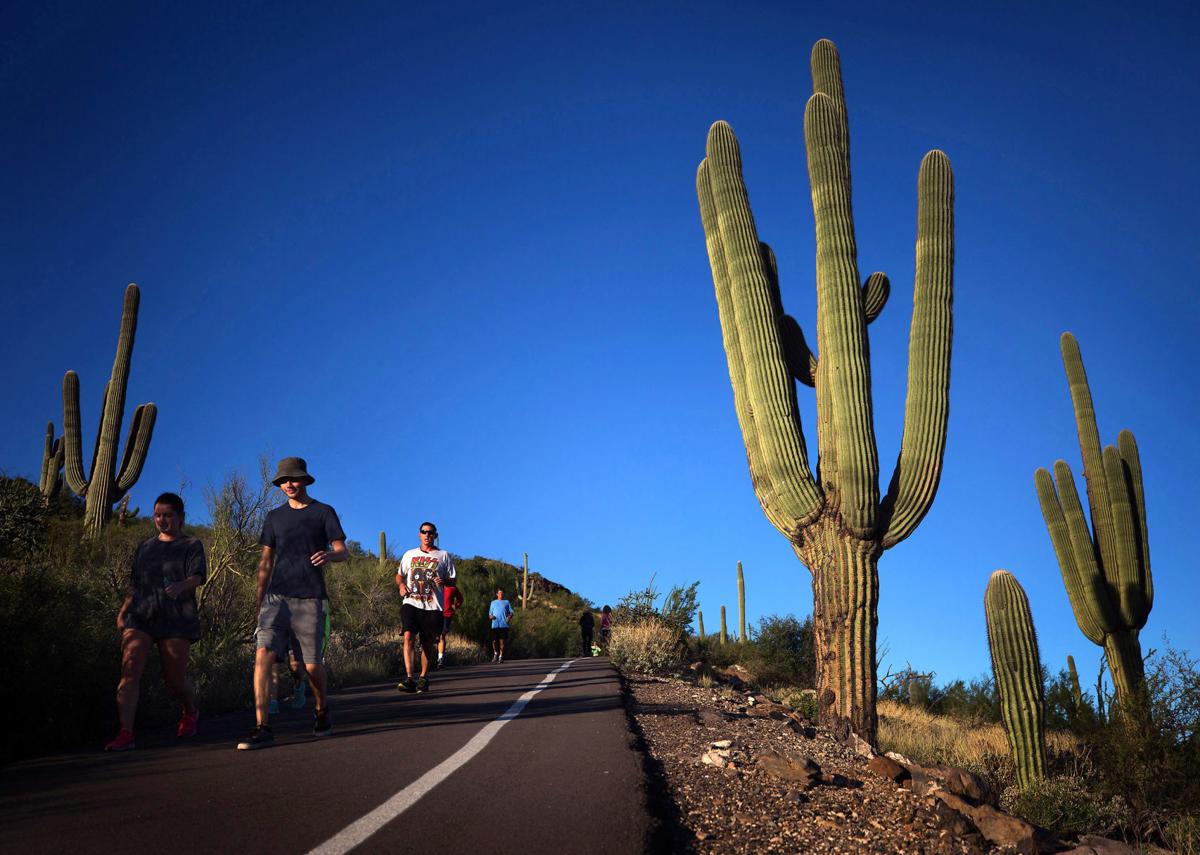 An estimated 60 stewards are needed for the guardianes de Tumamoc program. Applications will be accepted until Dec. 16. 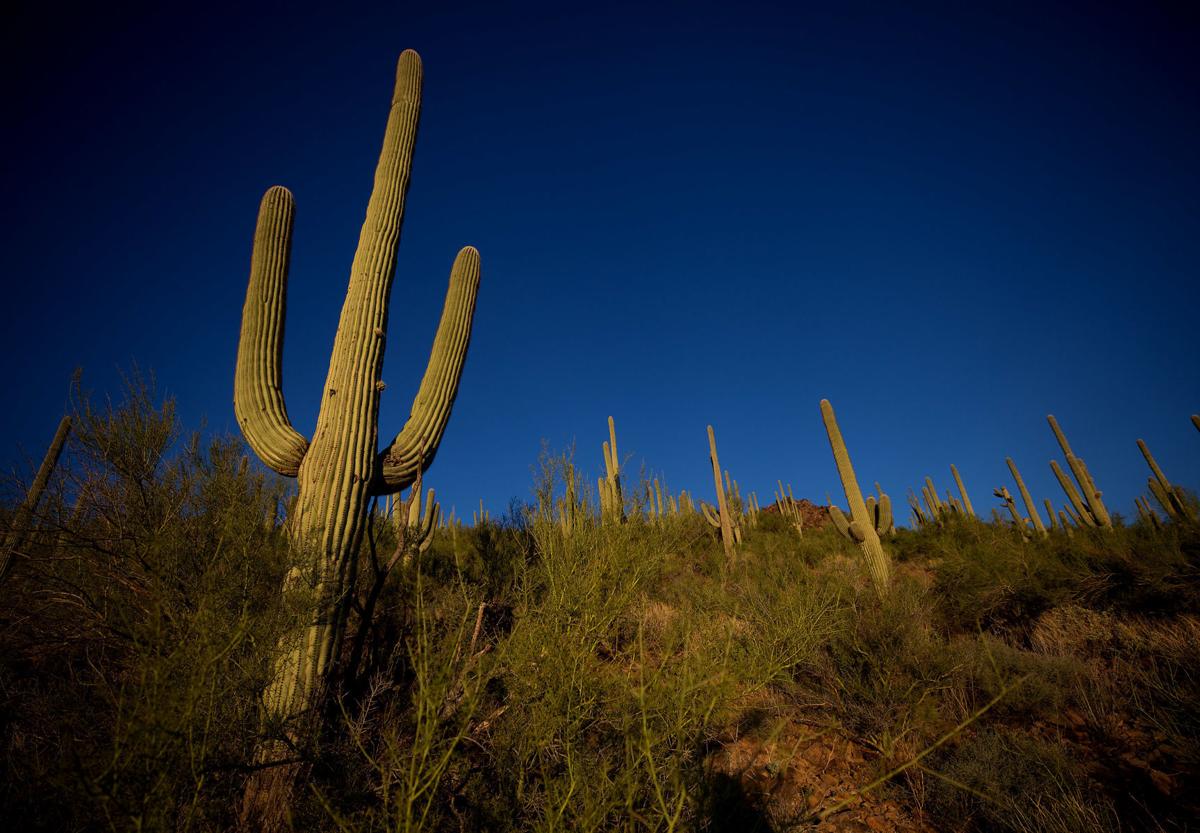 Researchers who studied the 5,800 saguaros on Tumamoc Hill said saguaros surprisingly thrive on the less-sunny, north-facing slope because it has deeper and richer soil, allowing them to retain water.