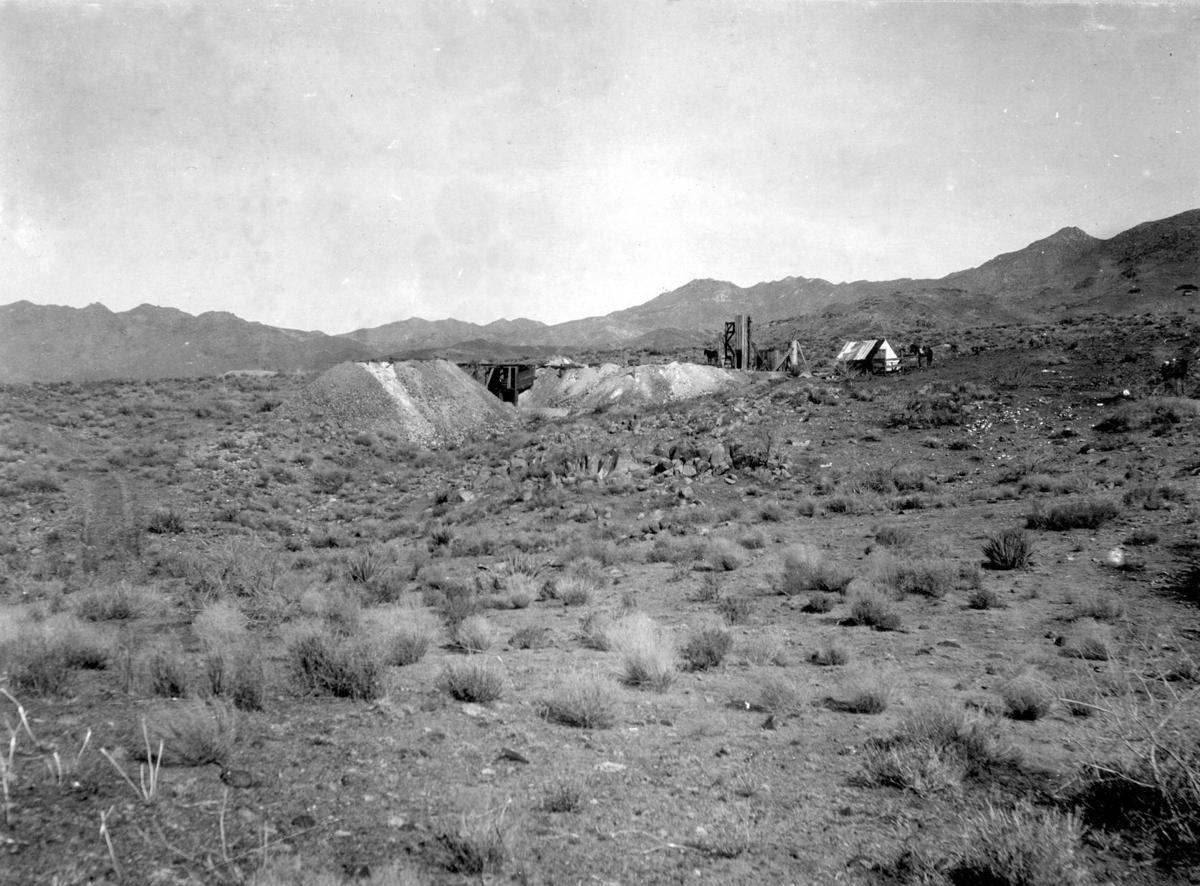 The Midnight Mine in Mohave County, looking northeast, circa 1906. 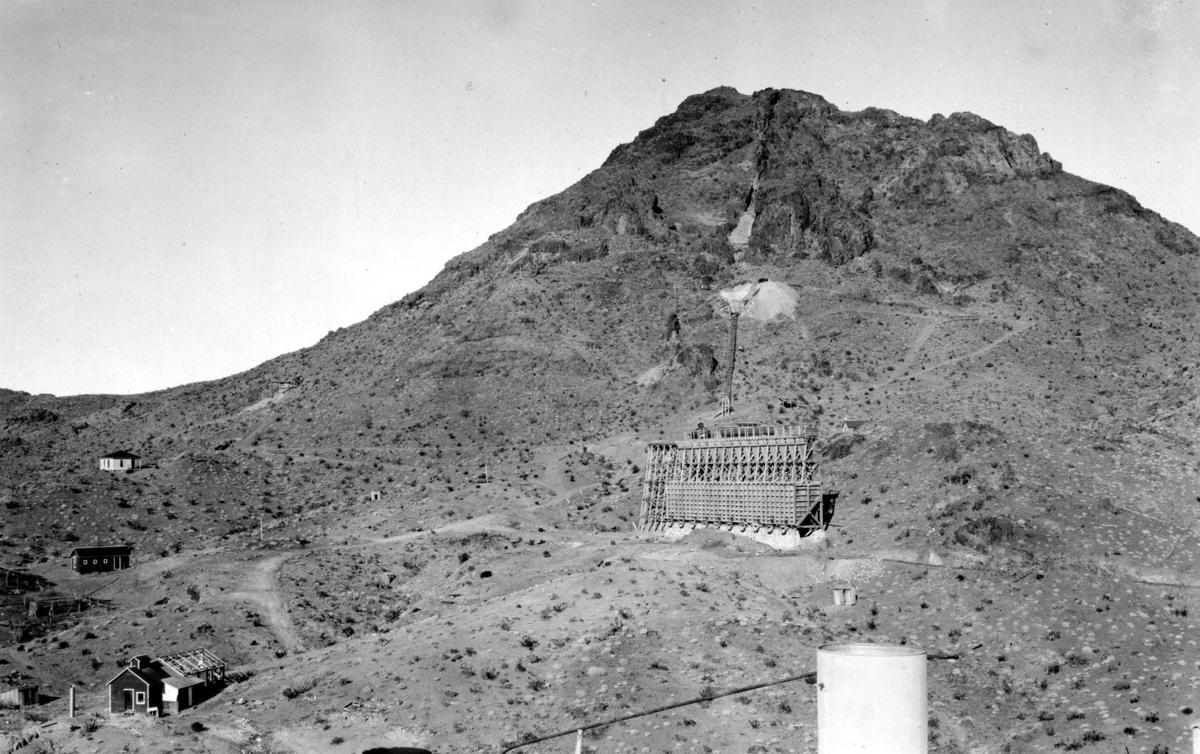 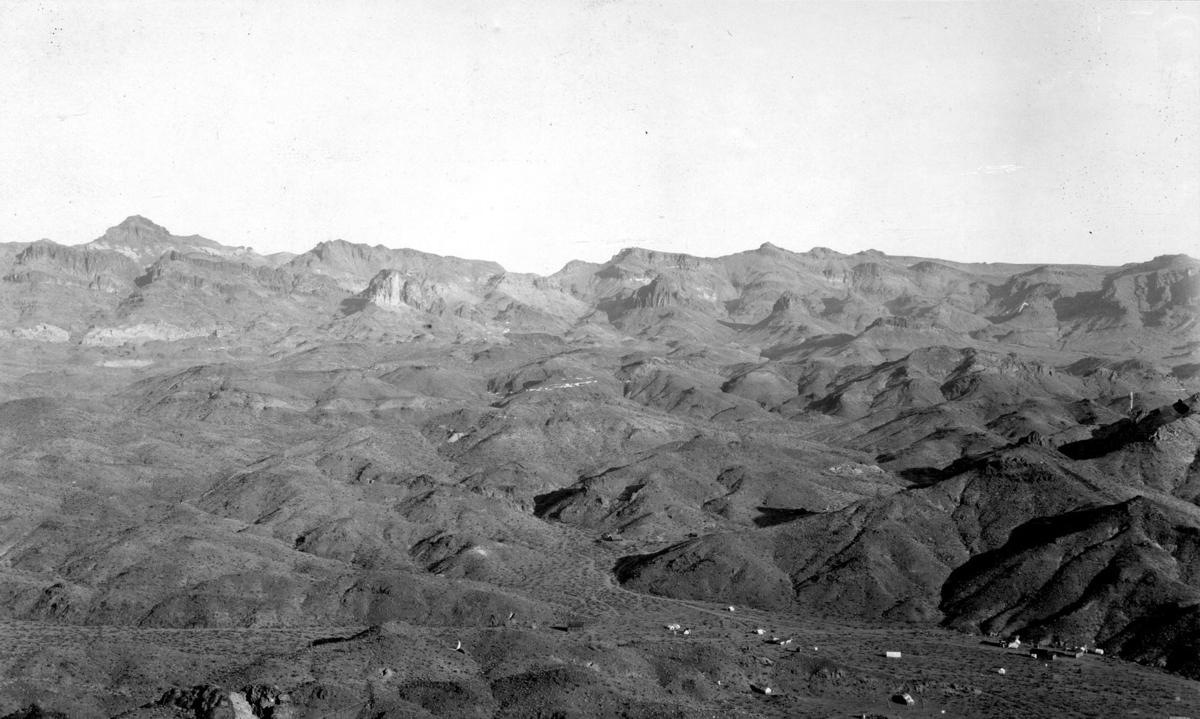 Mohave County became a destination for mineral exploration beginning around 1863 when Army Capt. John Moss and a number of other soldiers stationed at nearby Fort Mohave discovered gold.

The Moss Mine, 7 miles northwest of Oatman, was documented as having produced $250,000 in gold prior to 1900. Most production occurred at the surface with development consisting of a 230-foot shaft along with 750 feet of workings and a 900-foot tunnel. Decades following saw extensive mining operations around Kingman and Chloride.

Located 2 miles west of Oatman, the Leland Mine or Leland–Mitchell produced lodes from the Leland vein. Leland Hill was the site of a discovery of a prominent outcropping of a quartz calcite aggregate vein that attracted prospectors in search of gold. Around the same time, bonanzas nearby were located that included the Tom Reed and Gold Road veins. These would later contribute greatly to the documented mineral wealth of the San Francisco Mining district.

Col. Thomas Ewing, a miner and investor with decades of experience gold mining in California and Nevada, purchased the Leland Mine in 1901 only to resell it the following year to Philadelphia investors. Ewing would also purchase the nearby Vivian Mine, which included the minor settlement of Vivian, population 150.

The Mount Mojave Gold Mining Co. acquired the property around 1902. With reports of production of high-grade ore from tunnels and 15-foot-wide stopes in Leland Hill, the company hastily invested in development without determining the true profitability of the ore body.

It built a 12-chute ore bin at the mine site. Additional investment included more than $400,000 toward a 40-stamp mill and railway.

The mill was erected by the Colorado Iron Works of Denver, 11 miles west of the mine at Milltown. It was powered by a large pump station along the Colorado River 2 miles south of Needles. A large Corliss engine channeled water through an 8-inch pipe line to the mill.

More than 17 miles of narrow-gauge railway were also built to the Colorado River. The Mohave and Milltown Railroad served the Oatman and Goldroad mining operations, transporting ore with a fleet of 20 five-ton cars to the mill along the Colorado River at Needles, Arizona.

Processed ore was then transported by ferry to Needles, California, a connection along the Atchison, Topeka & Santa Fe Railway to market.

The mill proved to be a disappointment, as it failed to retain much of the gold values during processing. The inclusion of an onsite cyanide plant failed to yield additional profit.

The mine closed and parts of the railway were washed out by floods from summer storms.

The Mohave and Milltown Railway ceased operation by 1907 and was never extended for service to the more profitable Gold Road and Tom Reed Mines due to the steep topography.

In 1908, the property included eight patented claims, among them the Leland and the Mitchell. The Mitchell shaft, the deepest, exceeded 700 feet; noted for minor surface production, most of the depth was under water.

Another nearby mine was the Midnight, though its production was minimal with an average of $18 per ton in gold. As with other mines in the immediate area including the Vivian, below-surface ores tended to decline in value with increasing depth.

While the Leland and Midnight mines failed to be lucrative, other mining operations in the district including Gold Road, Tom Reed and the United Eastern (discovered in 1917) would contribute greatly to the documented mineral wealth of Mohave County by 1933 with a recorded value of $34 million in gold production.

The Vivian Mine reopened briefly with the rise in the market price of gold in 1934. A 100-ton cyanide plant was built onsite contributing to around 27,000 tons of gold ore produced by the mine until its closing in 1942 with a total production estimated at a value of around $250,000.

William Ascarza is an archivist, historian and author of seven books available for purchase online and at select bookstores. These include his latest, “In Search of Fortunes: A Look at the History of Arizona Mining,” available through M.T. Publishing Co. His other books are “Chiricahua Mountains: History and Nature,” “Southeastern Arizona Mining Towns,” “Zenith on the Horizon: An Encyclopedic Look at the Tucson Mountains from A to Z,” “Tucson Mountains,” “Arizona-Sonora Desert Museum” with Peggy Larson and “Sentinel to the North: Exploring the Tortolita Mountains.” Email Ascarza for a signed copy of his publications at AZMiningHistory@gmail.com

Mine Tales: Town of Chloride was centerpiece of a mining district near Kingman

The Cerbat Mountains near Kingman yielded millions of dollars worth of silver, gold, copper, lead and zinc in the mining boom years between th…

Mine Tales: Southern Arizona's mining history dates back over 1,000 years

Southeastern Arizona has a rich mining history dating back more than 1,000 years.

Beryllium is considered a strategic and critical metal important to the national security of the United States, with 78 metric tons of hot-pre…

Mine Tales: When mines needed muscle, mules were often the ticket

Ore-hauling animals contributed economic savings and production to many of Arizona’s mining towns and camps of the past.

Mine Tales: Arizona is renowned for garnet gemstones

Garnets are formed as a result of a combination of high temperatures and pressures. They crystallize in the cubic system.

Mine Tales: Ajo had Arizona's first open pit copper mine

With the right economic conditions Ajo may once again become a thriving mining town.

Mine Tales: Copper made Ray the largest Pinal County town in early 1900s

The Midnight Mine in Mohave County, looking northeast, circa 1906.