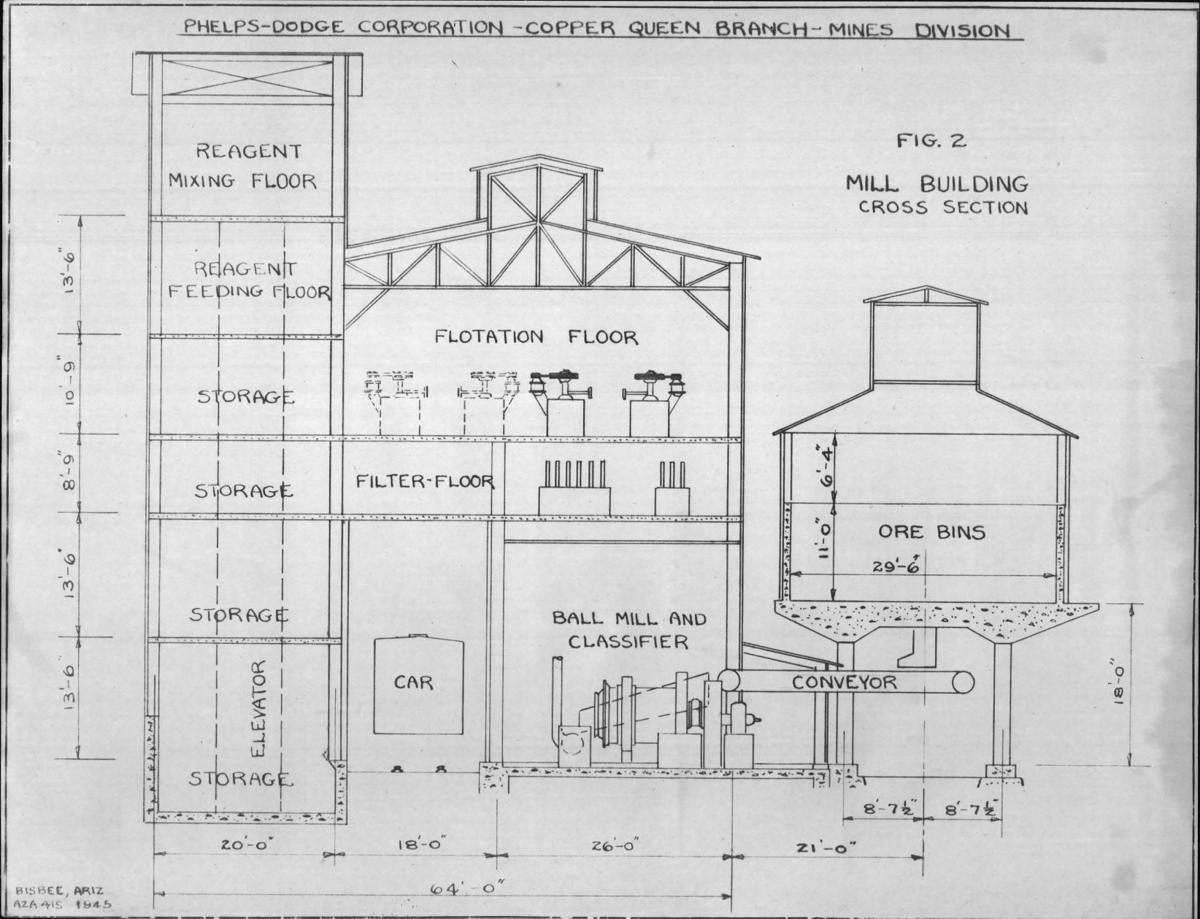 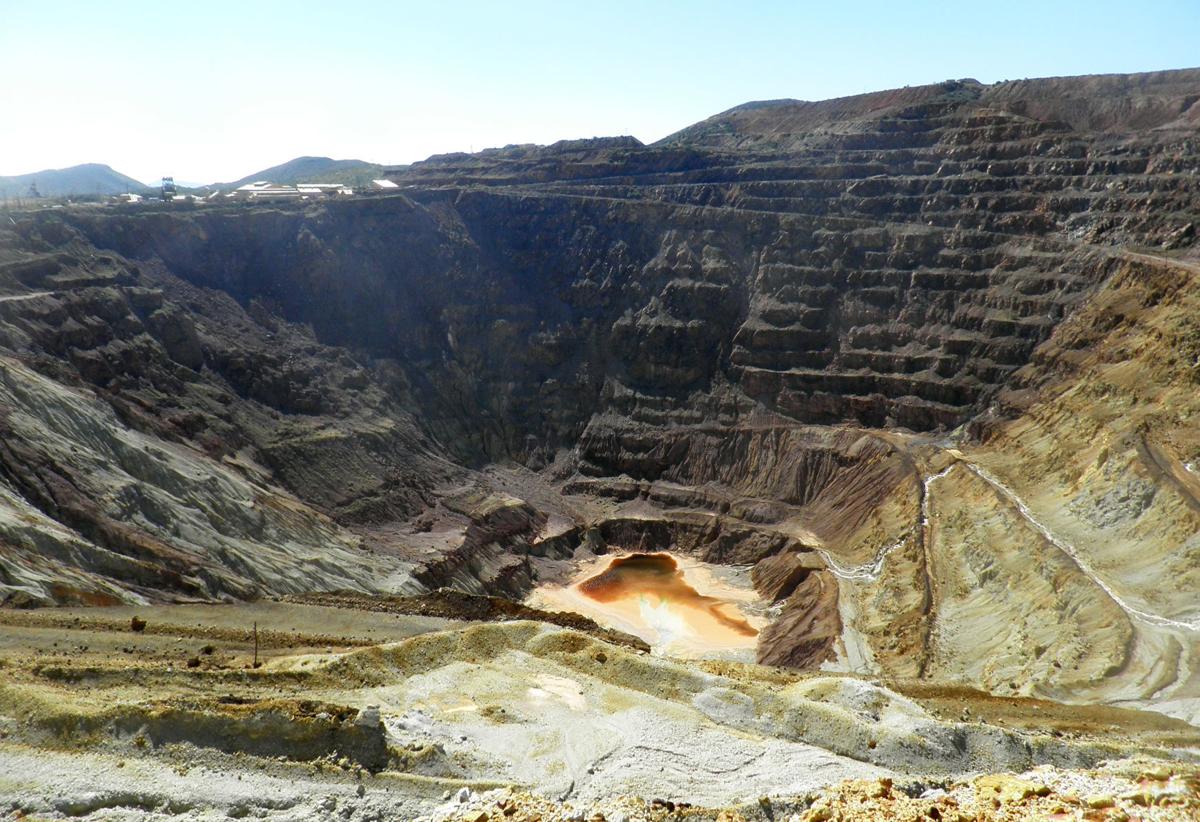 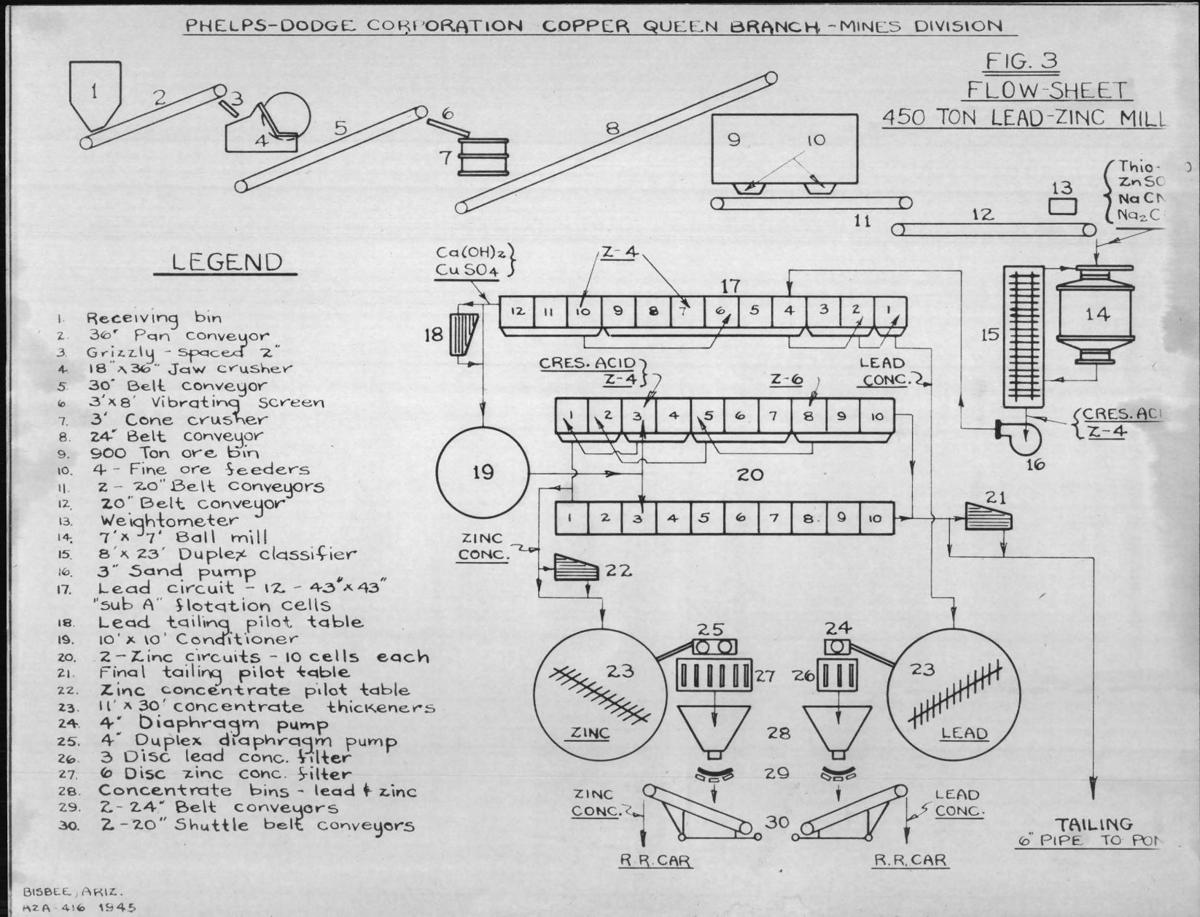 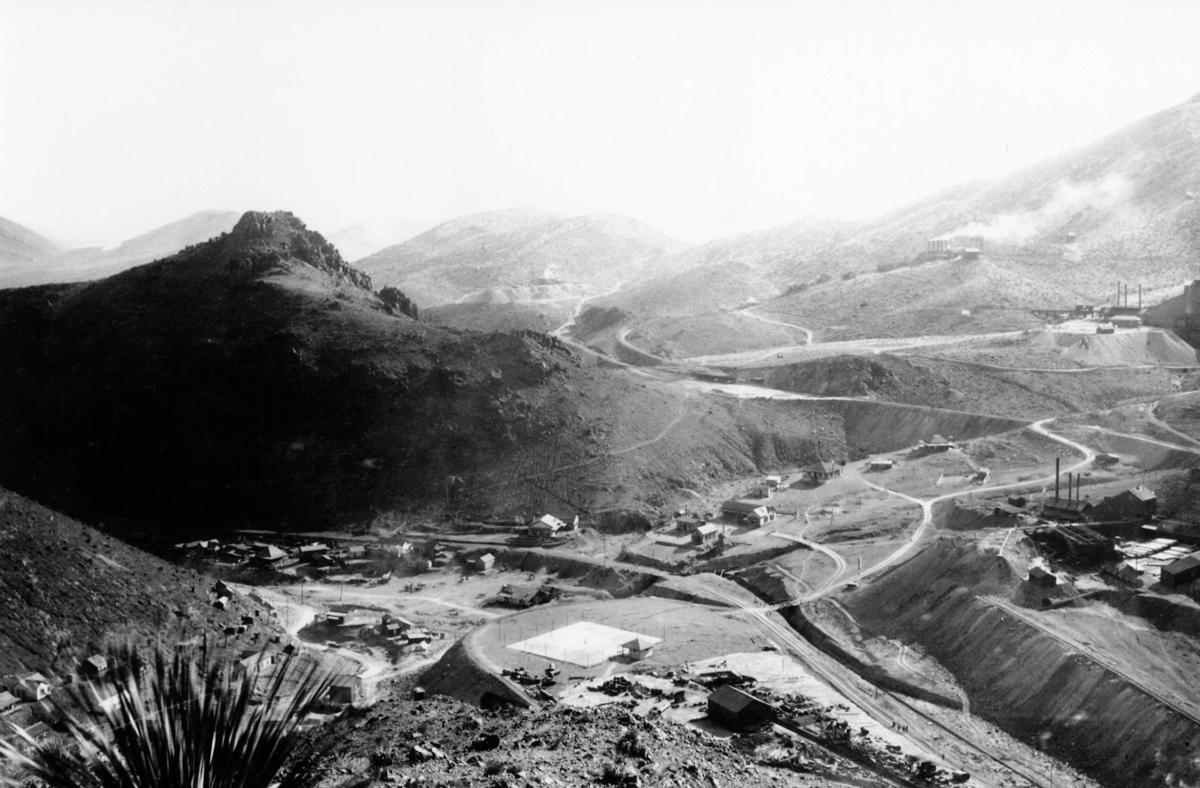 Bisbee, in the Mule Mountains of southeastern Arizona, has an extensive mining history dating from the 1870s. It is said the value of copper produced from the Copper Queen in 1925 alone was valued 10 times more than the cost of the Gadsden Purchase, which was $10 million in 1854.

The first open pit mine at Bisbee was the Sacramento pit comprising 35 acres. It began as a shaft in 1911 and six years later developed as an open pit.

Extensive geological research had determined copper ore deposits throughout the Bisbee district resulting from a large mass of intrusive granite porphyry pushed up into the surrounding schist and limestone. The copper was deposited in limestone traps forming ore bodies. Over time, progressive layers of barren limestone were formed on top, with the entire mass tilting southeastward.

Phelps Dodge invested in a large concentrator to mine the 550-foot high Sacramento Hill, which within a few years was reduced to a pit.

Rail proved vital in the removal of ore, with the delivery of empty ore cars transported by locomotive along the spiral tracks to the base of the pit to be filled by steam shovels and taken back to the surface for the ore’s treatment at the mill. Afterward the concentrates were shipped to the Douglas smelter for further refinement. Overall 10 million tons of copper ore were removed from the site.

Rising costs in ore transport and the condition of the pit floor becoming too narrow for vehicular navigation necessitated a cessation of steam powered shovels and trains by 1929.

Ore was mined briefly by underground caving methods and subsequently transported through the Sacramento shaft and hoisted to the surface until 1931. Production shifted to the nearby Campbell Mine.

During the 1940s, it was lead and zinc that were the primary metals produced by the Bisbee mines. Over 105 million pounds of lead and over 235 million pounds of zinc from the Campbell and Shattuck Denn mines were processed at the Phelps Dodge concentrator at Black Gap and the Shattuck-Denn custom mill at Lowell.

Comprised of crushing, grinding, flotation and filtering equipment, along with storage bins within three steel-constructed buildings, the mill treated 450 tons of lead-zinc ore per day.

Phelps Dodge acquired the last of its local competition in Bisbee with the purchase of the Shattuck-Denn Mining Co. in 1947. It saw future potential to exploit a nearby low-grade copper ore deposit south of the defunct Sacramento Pit known as the East Orebody. Attempts to work this site in 1917 by strip mining proved ineffective due to the low ore recovery of the concentration methods at the time.

The outbreak of the Korean War in 1950 led a government call for increased copper production. Phelps Dodge hastened the development as an eastern extension of the Sacramento Pit beginning with the investment of $25 million into the mining and processing complex that became known as the Lavender Pit.

Carl Trischka was the architect of the new open pit while its namesake, Harrison M. Lavender, Phelps Dodge vice president in charge of Western operations, oversaw an extensive strip mining operation that entailed the removal of 46 million tons of overburden.

Averaging around 1% copper per ton, this operation necessitated the erection of a new concentrator that could process 12,000 tons of ore per day. Production commenced at the Lavender Pit on Aug. 7, 1954.

Rail played an important role in the creation of the Lavender Pit. Two standard gauge, 1200-hp EMD diesel locomotives hauled gangue rock and leach materials to the Number 7 dump located outside the perimeters of the growing pit. Electric powered shovels and 65-ton capacity haul trucks proved more efficient in navigating the 50-foot benches and with the ore removal than their former steam powered counterparts during the development of the Sacramento Pit.

Underground mining shut down by mid-1975 and 488 employees were laid off or sent to work at other company mining operations.

Minor copper recovery continued with a leaching process until 1982.

The Lavender Pit made its mark on the history of Bisbee and bears testimony to the ingenuity of the Phelps Dodge Co. and its employees.

A 21st century mining revival at Bisbee would probably involve the development of the Cochise mineral deposit located just north of the Lavender Pit and first sampled back in 1989. The site is estimated to contain 280 million tons of material containing 0.46% copper.