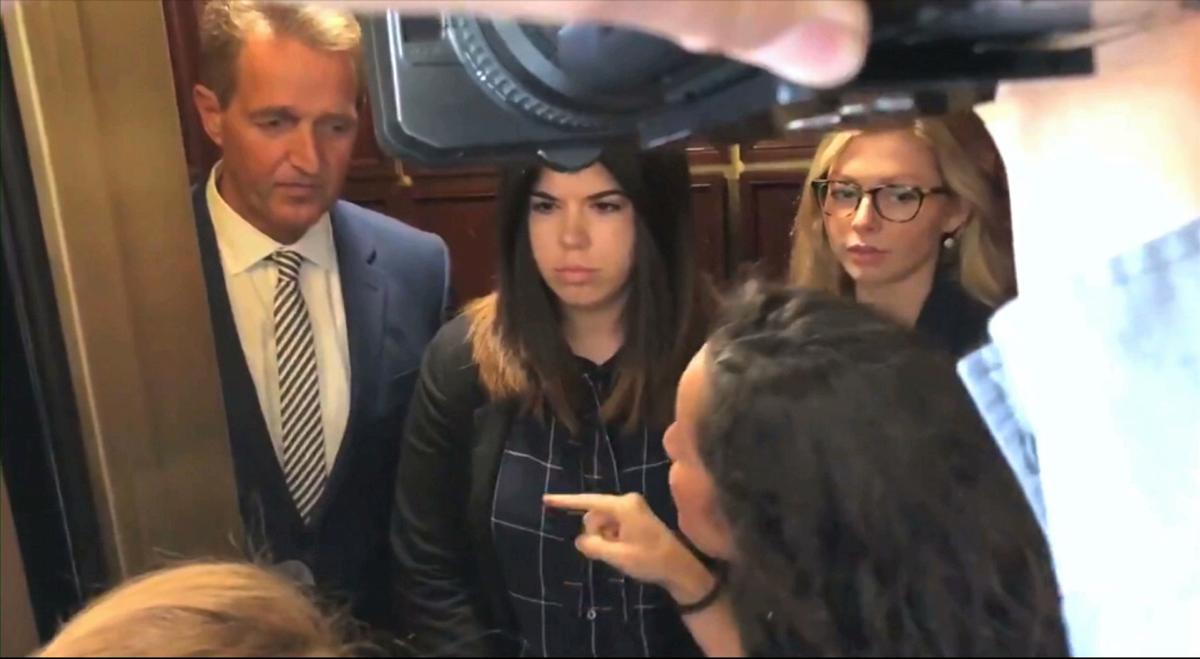 The moment was so fraught that it’s tempting to say it was what finally turned Sen. Jeff Flake’s notorious anguish into action.

Two women, as you may have seen, confronted him as he stood in a U.S. Senate elevator Friday morning. It was after Flake had announced he would vote for the nomination of Brett Kavanaugh to the U.S. Supreme Court, but before he’d had a chance to cast the vote.

“What you are actually doing is allowing someone who violated a woman to sit in the Supreme Court. This is not tolerable,” Ana Maria Archila said to Flake as he stood awkwardly inside the elevator, listening to the women outside.

Hours later, in the Judiciary Committee, Flake struck a deal that delayed the floor vote on Kavanaugh for up to a week, allowing the FBI to explore allegations of sexual misconduct against Kavanaugh more thoroughly.

What happened wasn’t just a change of heart on Flake’s part. It was a break of his well-worn pattern. Flake has so often spoken pretty words of moral anguish, only to follow them with inaction, that nobody expected anything different out of him Friday.

Back in December 2017, Flake accepted a promise from Sen. Mitch McConnell that the Senate majority leader would bring up a bill to put into law the Deferred Action for Childhood Arrivals program. In exchange and in advance, Flake voted yes on the tax bill.

This was just one of many times that Flake has spoken against either the policies, or the rhetorical tone, of the Trump administration only to fall in line every time with his vote.

That’s why it was natural not to take Flake too seriously when he said last week: “I do not believe that the claim of sexual assault is invalid because a 15-year-old girl didn’t promptly report the assault to authorities, as the president of the United States said just two days ago.”

When Flake predictably announced his plan to vote for the nomination in committee Friday morning, he explained away his concerns by saying he had no way of knowing whether to believe Kavanaugh’s accuser or Kavanaugh:

“What I do know is that our system of justice affords a presumption of innocence to the accused, absent corroborating evidence. That is what binds us to the rule of law. While some may argue that a different standard should apply regarding the Senate’s advice and consent responsibilities, I believe that the Constitution’s provisions of fairness and due process apply here as well.”

What happened in the elevator may have affected Flake, but it’s not what actually changed his mind. What did that was the institutional rancor, the absent collegiality, that he saw in the Judiciary Committee. This is what he told The Atlantic’s McKay Coppins about the women who confronted him:

“I mean, keep in mind, their agenda may be different than mine. I think some of their concern was how Kavanaugh would rule on the court. They may have been there prior to the allegations against him because of his position on some issues. But it certainly struck a chord.”

What really struck a chord, Flake said, was the acrimony of the committee and how it reflected badly on the Senate, the Supreme Court and the country at large. When Coppins asked him what institutions Flake was concerned about, Flake answered:

“Two institutions, really. One, the Supreme Court is the lone institution where most Americans still have some faith. And then the U.S. Senate as an institution — we’re coming apart at the seams. There’s no currency, no market for reaching across the aisle. It just makes it so difficult.

“Just these last couple of days — the hearing itself, the aftermath of the hearing, watching pundits talk about it on cable TV, seeing the protesters outside, encountering them in the hall. I told Chris (Sen. Chris Coons ofDelaware), ‘Our country’s coming apart on this — and it can’t.’ And he felt the same.”

Coons, a Democrat, acknowledged after the hearing that he had toned down his planned remarks in the committee Friday.

Instead of speaking angrily, as others did, he appealed directly to Flake and other Republican friends to slow the rush and give the vote a week.

In a dramatic move, Flake rose as other committee members spoke, touched Coons on the shoulder and asked him back to the anteroom.

After they came back out, Flake said: “I think it would be proper to delay the floor vote for up to, but no more than one week, in order to let the FBI do an investigation limited in time and scope to the current allegations that are there.”

This was actually a good, common-sense move. Democrats on the Judiciary Committee may mostly want to stop Kavanaugh’s nomination, but if you listened to their statements Friday morning, a common denominator was a simple request to have a more thorough inquiry into sexual-misconduct accusations against Kavanaugh.

Democratic members were justifiably outraged that the committee was rushing to approve Kavanaugh without either calling to testify the one alleged witness to the primary sexual-assault allegation, Kavanaugh’s high-school friend Mark Judge, or having the FBI investigate the allegation.

The rush was not justified, especially when Kavanaugh’s accuser, Christine Blasey Ford, testified Thursday morning in a way that Republicans and Democrats agreed was credible.

But that isn’t what finally turned Flake’s anguish into action; it was concern over institutional and cultural fragmentation.

Then there’s also this: On Monday evening, Flake has a pre-arranged speaking engagement at the New Hampshire Institute of Politics, entitled “After the Deluge: A Rejection of Destructive Politics and a Return to Principle.”

Yes, he’s speaking in New Hampshire, the home of the first presidential primary election, at Saint Anselm College’s politics institute — and it’s the second time he’s done so this year. He’s definitely exploring a run for president in 2020.

So yes, it was a change to see Flake do something for once after voicing his typical deep qualms. But it’s interesting to note that what really got to him was the destructive polarization of the Senate, and that his action coincided nicely with his exploration of a presidential run.

The Southern Arizona Home Builders Association’s Home and Garden Show aims to give you home tips, make you laugh and gussy up your yard.

But most of the heaviest rain is expected to move west of Tucson, officials say.

Comics readers, we want your opinions

Based on responses to our last comics survey, the Arizona Daily Star is considering adding comics to our daily lineup — but doing so would mea…

Is the First Amendment under attack when it comes to a free press?

Day’s work brought him international attention. He won awards and his work is in collections around the country. Aretha Franklin wore one of his creations. So did dancer Ann Miller. The pope was presented with a Day-created alb, a religious garment, woven of cream-colored silk with crosses on the sleeves.

The professors say Kavanaugh lacks the appropriate temperament to be on the Supreme Court.

The Arizona Republican told reporters on Capitol Hill Thursday that he saw “no additional” corroboration of the allegations against Kavanaugh in the report.

Jon Kyl purportedly serves us, the people of Arizona, again, and yet he has largely been hiding from the hurly-burly that McCain seemed to relish