Read Today's E-Edition
Share This
In 'The Zoom Where it Happens,' Adia Barnes learned tips that could make Wildcats a hoops hit
Share this
By PJ Brown Special to the Arizona Daily Star

Adia Barnes is not a poker player.

Still, she knows when to play it close to the vest and when to bet the house.

And she definitely knows when she is holding a winning hand.

This year’s Arizona Wildcats boast Pac-12 defensive player of the year Aari McDonald, Pac-12 defensive team member Sam Thomas and Cate Reese, and anything seems possible. The Wildcats have added transfers to the mix, too: Canadian National Team member Shaina Pellington and the ACC’s sixth person of the year, Trinity Baptiste, figure to contribute to a team that was headed for the NCAA Tournament in March before the coronavirus hit.

It’s no wonder Arizona was ranked No. 7 in ESPN’s way-too-early poll.

While Barnes doesn’t put much stock in the polls, she did listen to Annie Duke, former professional poker player and author of a book called “Thinking in Bets.”

“I had no idea, but there are lots of parallels between coaching and poker,” Barnes said. “It was something that I never thought of. She was brilliant and related a lot to poker. I’m not a poker player so I never thought about it, but it was so informative.”

Duke was a speaker on a series of calls set up this summer by Arkansas women’s basketball coach Mike Neighbors. The calls were a way for Neighbors, Barnes’ former boss at the Washington, to fill the void left during the pandemic. He missed talking about books and other things in hotel lobbies and bars while on the road.

Attendance on the calls grew from eight to 100 during the summer. Coaches watched, and so did executives from companies like Nike and Walmart.

Barnes said Neighbors is “so connected and so good at putting stuff together.”

“He has a different approach to stuff. He thinks outside of the box with everything,” she said. “He’s the best at growing the game and sharing knowledge. He loves to do it and I love that about him.”

Eastman shared NBA stories, focusing on leadership and what it takes to be the best — and how to coach them.

Medcalf, who was a mental training coach for UCLA’s women’s basketball team, taught that you have to train to be clutch.

However, it was Duke’s talk that really resonated with Barnes.

“She makes decisions not knowing a lot of information, which is similar to basketball,” Barnes said.

“One of the first things she said was, ‘life is like poker, not chess.’ Poker is luck with imperfect information. That is similar to coaching. As a coach, we always make decisions with limited information. Every decision in life is poker-like. Your beliefs lead to your decision. Betting and percentages go into making your decisions. In your program you bet on future availability.

“In addition, people react to losing in two ways — some people become conservative (while) others analyze. This is interesting. What I didn’t know is that it is all guessing — like a (basketball) game. Things change all the time and you don’t know what’s going to happen.”

Barnes and the other participants on the calls didn’t just listen to the speakers. Many held follow-up calls to discuss how these lessons apply to their teams.

Barnes hosted calls, too — one including coaches from the UA’s softball, volleyball, golf and tennis teams and Jim Rosborough, a Pima College assistant coach and former assistant to Lute Olson at the UA.

“We talked about defense and strategy,” Barnes said. “We showed him film on some stuff we struggle with and he gave input and explained why he thought we had a tough time in certain situations. It was awesome.”

Arizona's Paige Whipple found balance, made music during time away from volleyball

Music has been part of Paige Whipple’s life from a young age. She started taking piano lessons at age 3, following in her sister’s footsteps. Whipple played viola for six years in the school orchestra, and has taught herself to play both the guitar and ukulele.

Salvo Coppa, Barnes' husband and a Wildcats assistant coach, said that Barnes and the baby are doing well.

Her book — now a binder — contains all the information the pitcher needs to get opposing hitters out. O'Toole will need it on Saturday, when Athletes Unlimited softball play continues from Rosemont, Illinois. Two games will air on ESPN2.

Wildcats women working out, waiting for NCAA's ruling on start to 2020-21 season

The NCAA is expected to announce Sept. 16 when men’s and women’s college basketball can start their seasons. Once that decision is made, the Wildcats will see how the Pac-12 responds. The conference pushed all sports competitions to January, though a recent arrangement with a rapid-testing company could conceivably change their timeframe again.

UA women's basketball coach Adia Barnes said Lute Olson and former UA football coach Dick Tomey, "two great men I respected and could learn from," reached out to her when she was hired. She said Olson, a hall of famer and 1997 national champion, was "a huge supporter of mine."

Arizona is off Thursday before hosting Colorado for season-ending series.

Men in Black are now 4-5-2 on the season after 2-1 win Wednesday night at Kino North Stadium.

Four-star power forward DaRon Holmes, who was named the 2020 Arizona Gatorade Player of the Year, included the UA in his final list of schools.

The trauma of losing a season — and the uncertainty of when it's safe to play again — prompted coaches and athletes to turn to the UA's Clinical and Sport Psychology Health Services. The department has helped coaches realize that they can't coach their players the same in the middle of a pandemic.

Wildcats women can't wait to bring back fans; 'it's a huge advantage here'

The Wildcats will have to wait until 2021 to play in front of their fans. The Pac-12 ruled last week that the men's and basketball seasons won't start until Nov. 25, and that fans wouldn't be allowed until January at the earliest.

With Adia Barnes out on maternity leave, UA great Reggie Geary steps in with assist

It took the Arizona players a while to figure out it was Geary, who helped UA to the 1994 Final Four, that was helping coach. 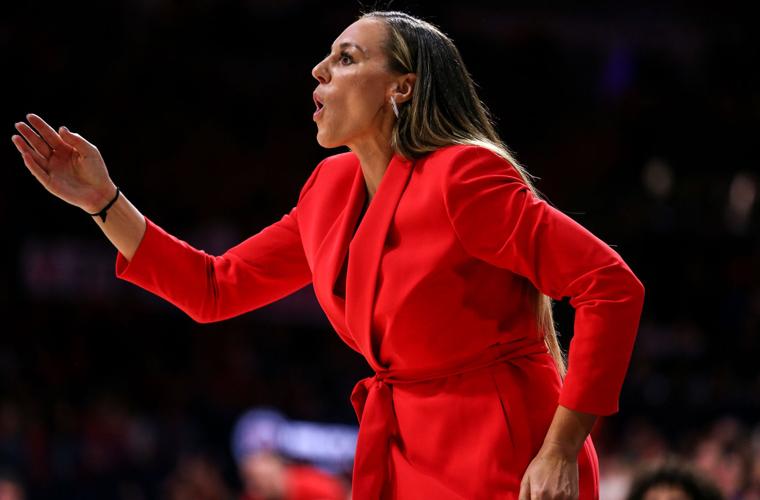 UA coach Adia Barnes said she learned over the summer that coaching is a lot like playing poker. 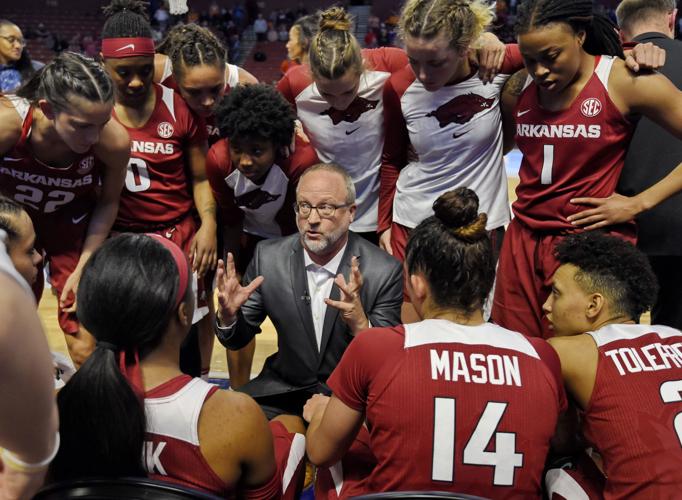 Arkansas coach Mike Neighbors gathered fellow leaders from sports and the corporate world for a summer conference series. The name, “The Zoom Where is Happens,” is a play on the title of a “Hamilton” song.