Khalil Tate goes down, and the Arizona Wildcats lose their grip on the Territorial Cup
Share this
1 of 2 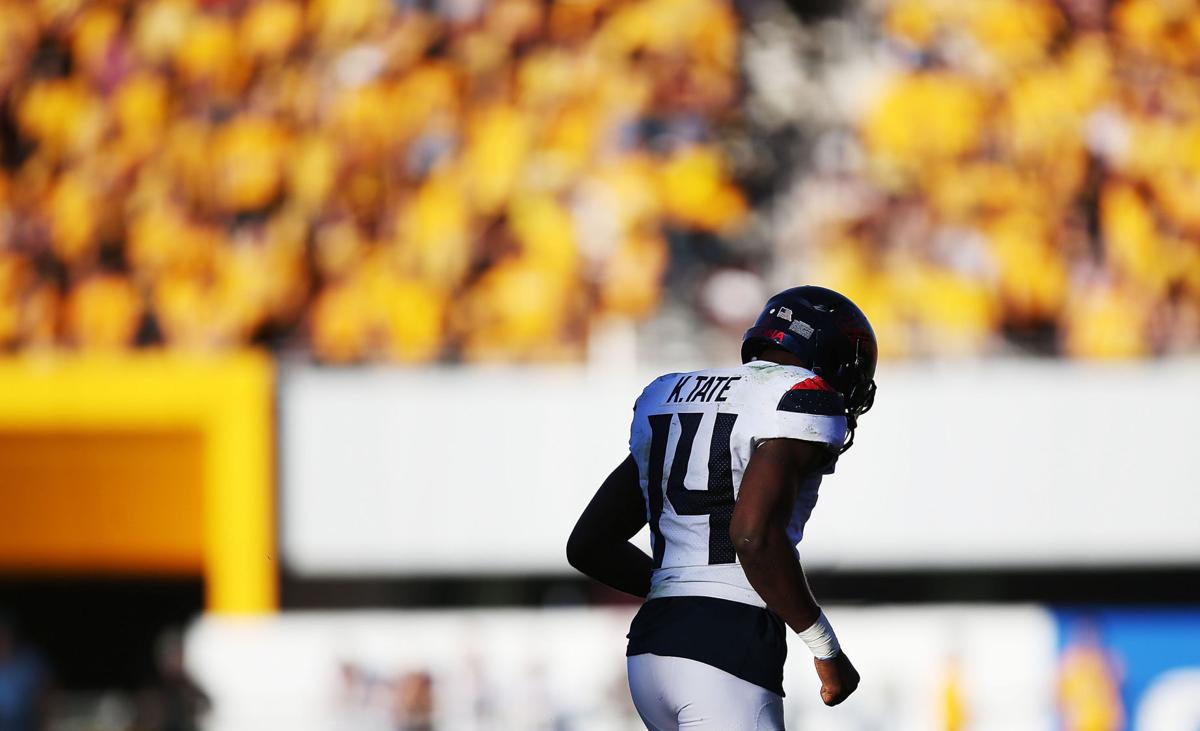 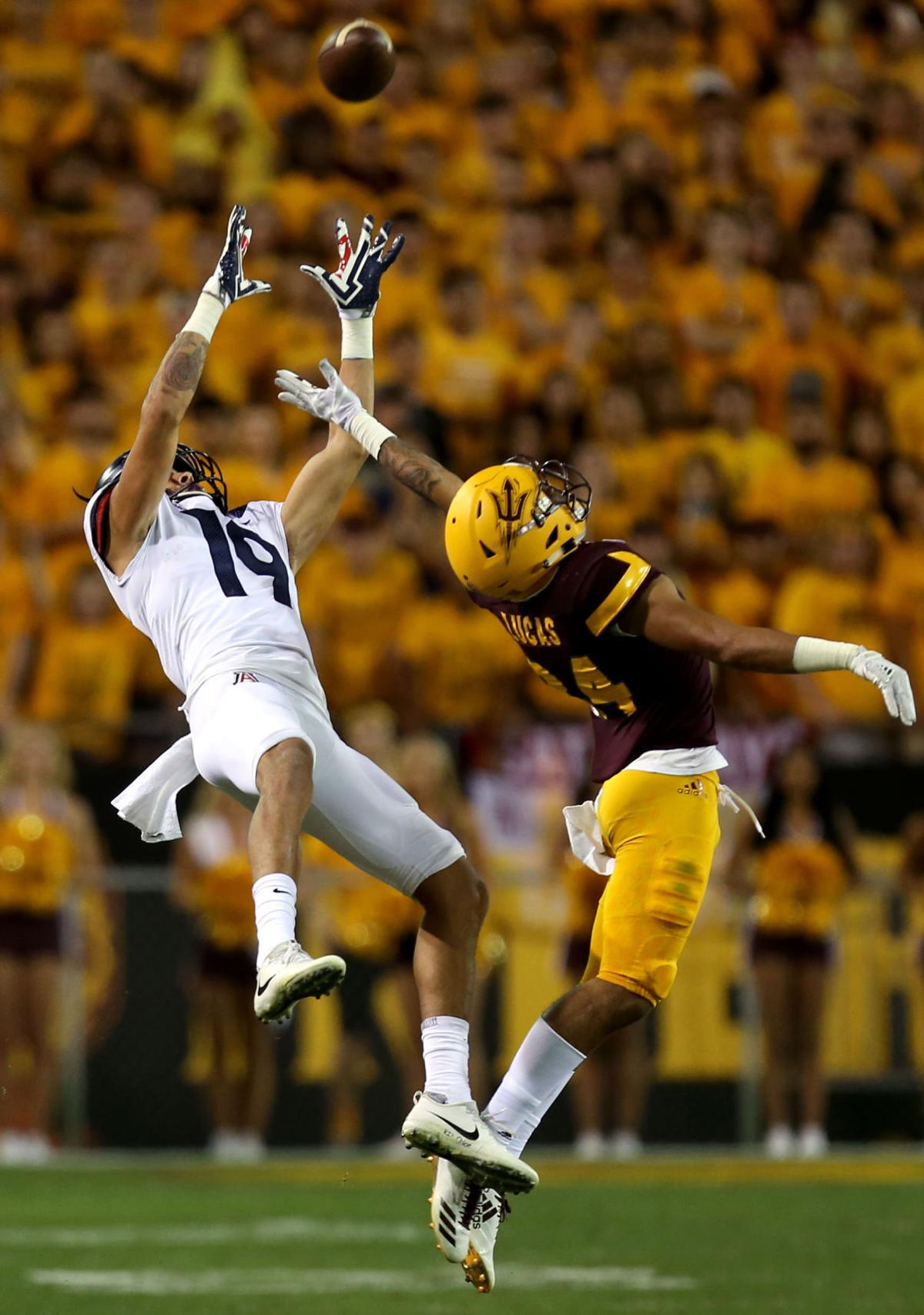 TEMPE — The Arizona Wildcats’ season changed when a quarterback went down. So did the Territorial Cup. Except this time, everything changed for the worse.

Arizona was rolling behind Khalil Tate and an injury-depleted defense Saturday afternoon at Sun Devil Stadium. The UA led rival Arizona State by 10 points at halftime.

But at some point during the first half, Tate banged his left shoulder. He aggravated it on the final play of the half, when he was driven into the ground after launching a Hail Mary pass.

Tate, who had set records and guided the Wildcats to five wins in seven games after taking over at quarterback on Oct. 7, couldn’t start the second half. Arizona couldn’t hold its lead.

A calamitous sequence of events early in the third quarter doomed the Wildcats. Arizona lost 42-30 to ASU, sending the Territorial Cup back to Tempe.

“They came out more intense, more ready in the second half,” UA freshman linebacker Tony Fields II said. “They had more fire in their eyes. I felt like we settled down a little bit — felt like we had the win.”

It was anything but secured. It took just 6 minutes and 10 seconds of clock time for the Sun Devils to take their first lead. It eventually grew to double figures. It was a sequence of events from which the Wildcats never recovered.

They lost for the third time in their past four games, finishing the regular season at 7-5 overall and 5-4 in the Pac-12. Picked to finish last in the South Division, Arizona far exceeded expectations. But the defeat left the Wildcats with a bitter taste.

“We’ll be mad for a couple days,” said UA coach Rich Rodriguez, who is now 2-4 against ASU. “You lose the Territorial Cup, it makes you angry.”

Rodriguez was highly agitated after the game. He was upset with himself, annoyed that reporters were second-guessing him and frustrated over an officiating decision that didn’t go Arizona’s way.

Rodriguez questioned his play-calling late in the fourth quarter, when the Wildcats, trailing by 12, reached the ASU 1-yard line. On third-and-goal, the Sun Devils stuffed Zach Green for a 2-yard loss. On fourth-and-goal, backup quarterback Brandon Dawkins ran left but had nowhere to go. He reversed field and tried to hit Shawn Poindexter just past the goal line. The pass fell incomplete.

“I wish I had those last two plays over,” Rodriguez said. “I’d certainly call different plays. It wasn’t (Dawkins’) fault.”

Rodriguez defended his play-calling sequence and clock management at the end of the first half. Arizona had the ball twice in the final 2:05. The second of those possessions began with one minute left, the ball at the UA 45-yard line and the Wildcats holding two timeouts.

Rodriguez called consecutive running plays and didn’t call time out until 14 seconds remained. Another run advanced the ball to the ASU 45. Rodriguez called time with three seconds left. The only option the Wildcats had at that point was the Hail Mary attempt that resulted in an incomplete pass and Tate getting leveled.

“We were trying to score,” Rodriguez said. “We had the ball across midfield. It was third down. I don’t want to punt, because lord knows what happens when you punt. We were going to try to get some field positon. Move it down there and take one shot for the end zone.”

Tate was slow to get up after the play, which isn’t unusual for him. He warmed up for the second half. But he couldn’t go, at least at first.

Dawkins, who began the season as the starter, led the offense onto the field. Arizona went three-and-out. Then the punting problems that have plagued the Wildcats in recent weeks resurfaced at the worst time.

Jake Glatting couldn’t handle a low snap. By the time Glatting got a good enough grip, ASU’s Curtis Hodges was on top of him. Hodges blocked the punt, sending the ball out of bounds at the 5-yard line. Two plays later, Demario Richard scored from the 1 to make it 24-21.

On the ensuing possession, on third-and-7, Dawkins threw an interception to Demonte King. The Sun Devils (7-5, 6-3) took over at the UA 30-yard line. Eight plays after that, Manny Wilkins hit N’Keal Harry for a 5-yard touchdown.

The Arizona defense, missing two starting defensive linemen and struggling entering Saturday, had played valiantly up to that point. Led by Fields and fellow linebacker Colin Schooler, the Wildcats limited the Sun Devils to 35 rushing yards in the first half.

But ASU’s average starting field position in the third quarter was the UA 37-yard line. It was too much for the Wildcats to overcome.

“The field position that our defense was put in was just horrendous,” Rodriguez said. “I don’t know what the final field-position stats were, but I guarantee it was awful.”

After ASU expanded its lead to 35-24 on Richard’s 6-yard TD run, Arizona again had trouble getting off a punt. This time Josh Pollack dropped a waist-high snap. He picked up the ball and kicked it with his left foot. The ball barely made it to the line of scrimmage, where it was fumbled by the Sun Devils and recovered by the Wildcats.

“Holy cow,” Rodriguez said. “Division I team, and we can’t punt? We can’t catch a snap and punt the ball? It’s just unfathomable.”

The fortunate break gave Arizona a brief glimmer of hope. Dawkins’ 50-yard touchdown run trimmed the deficit to 35-30. A two-point try failed, but more than 13 minutes remained in the game.

The UA defense forced ASU to punt. Shun Brown caught the ball near the right sideline and ran toward the left sideline, outflanking the Sun Devils. He made it all the way to the end zone for an apparent go-ahead touchdown, but Poindexter was flagged for blocking Dasmond Tautalatasi in the back. Poindexter appeared to hit Tautalatasi from the side.

Instead of taking the lead, Arizona took possession at its 10. Three plays netted minus-6 yards. A net punt of 29 yards set up ASU at the UA 33. Nine plays later, Wilkins connected with Harry for another touchdown to bump the lead to 12.

“I’m just so proud of our football team,” ASU coach Todd Graham said. “I’m sitting here looking at this Cup, and I’ve kissed it about five times already. I’m proud of Sun Devil Nation. Man, they were awesome tonight. What a great atmosphere. Got that cup back where it belongs.”

Arizona’s immediate future is suddenly fuzzy too. Tate came back into the game on the Wildcats’ third possession of the third quarter but was clearly impaired. Rodriguez wasn’t sure whether Tate would be available for Arizona’s final game, most likely the Las Vegas Bowl on Dec. 16.

“I’m not a doctor,” Rodriguez said. “I’m not a trainer. He was banged up and couldn’t go today.”

Tate was 10 for 10 before the fateful Hail Mary attempt that sent the Wildcats into a spiral.

Since 1899, the University of Arizona and Arizona State University have played the annual football rivalry game known as The Territorial Cup.

Notes, quotes and stats from the Arizona Wildcats’ 42-30 loss at Arizona State

Pertinent factoids, words and numbers from the Cats' Territorial Cup setback in Tempe.

‘We shocked a lot of people,’ cornerback Lorenzo Burns said after the Cats concluded a better-than-expected 7-5 regular season.