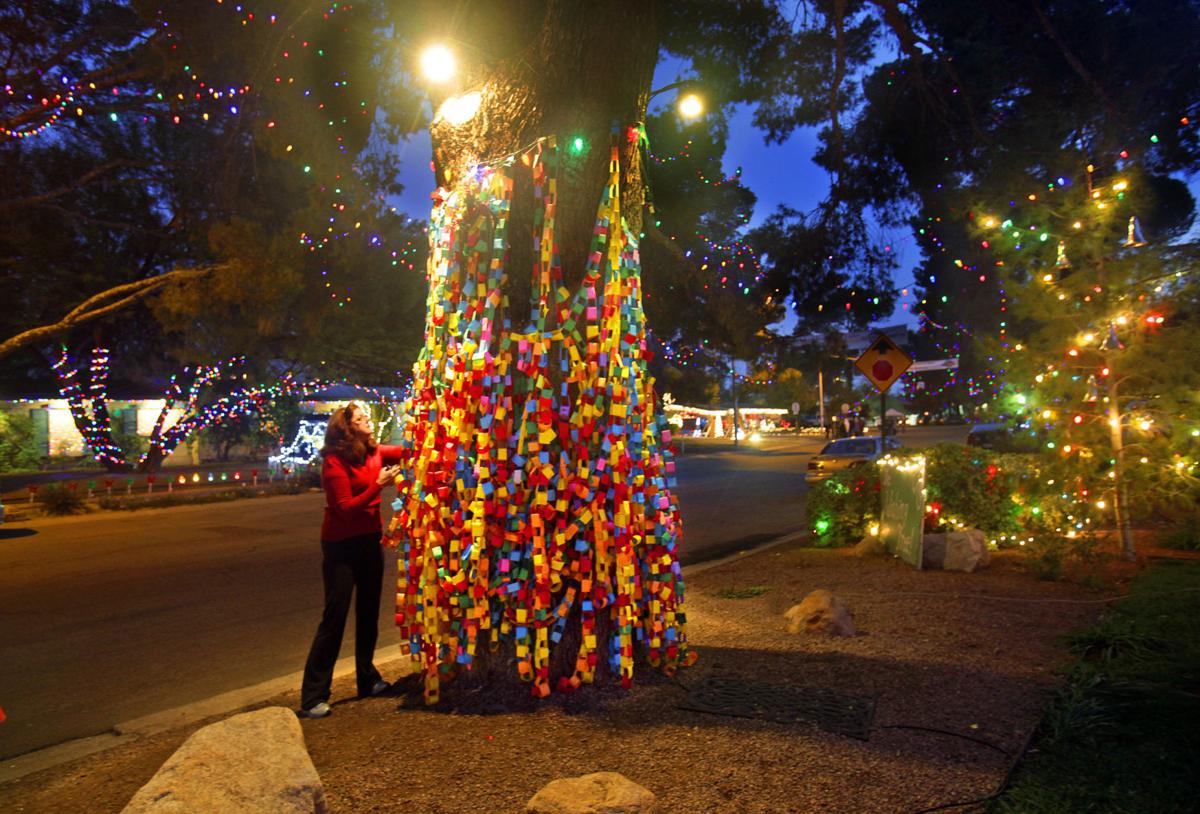 Kathleen Bethel, left, staples some of the longer wishing links together at her family's "Wishing Tree" in Winterhaven, Wednesday, Dec. 21, 2011, where folks who stroll through the decorated neighborhood, can stop and make a wish on a colored piece of paper and attach it to the wishing tree. 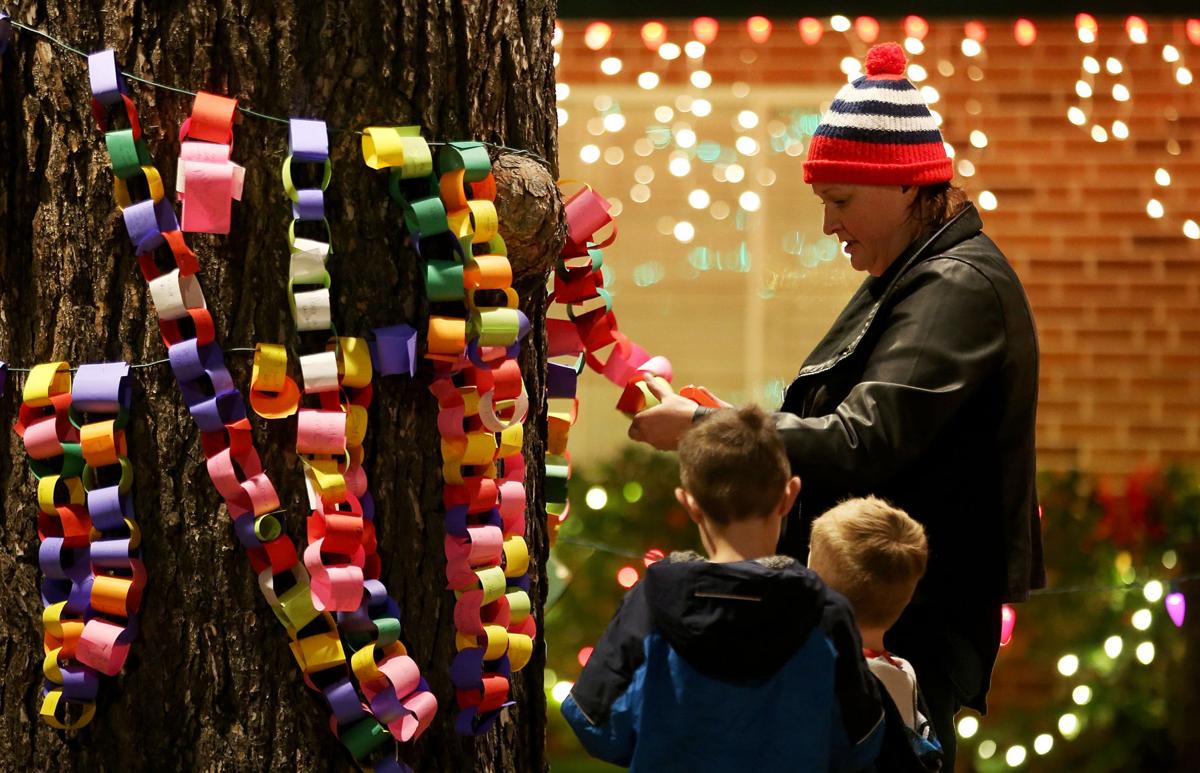 Winterhaven visitors affix wishes to the Wishing Tree during opening night of the 2017 Winterhaven Festival of Lights. 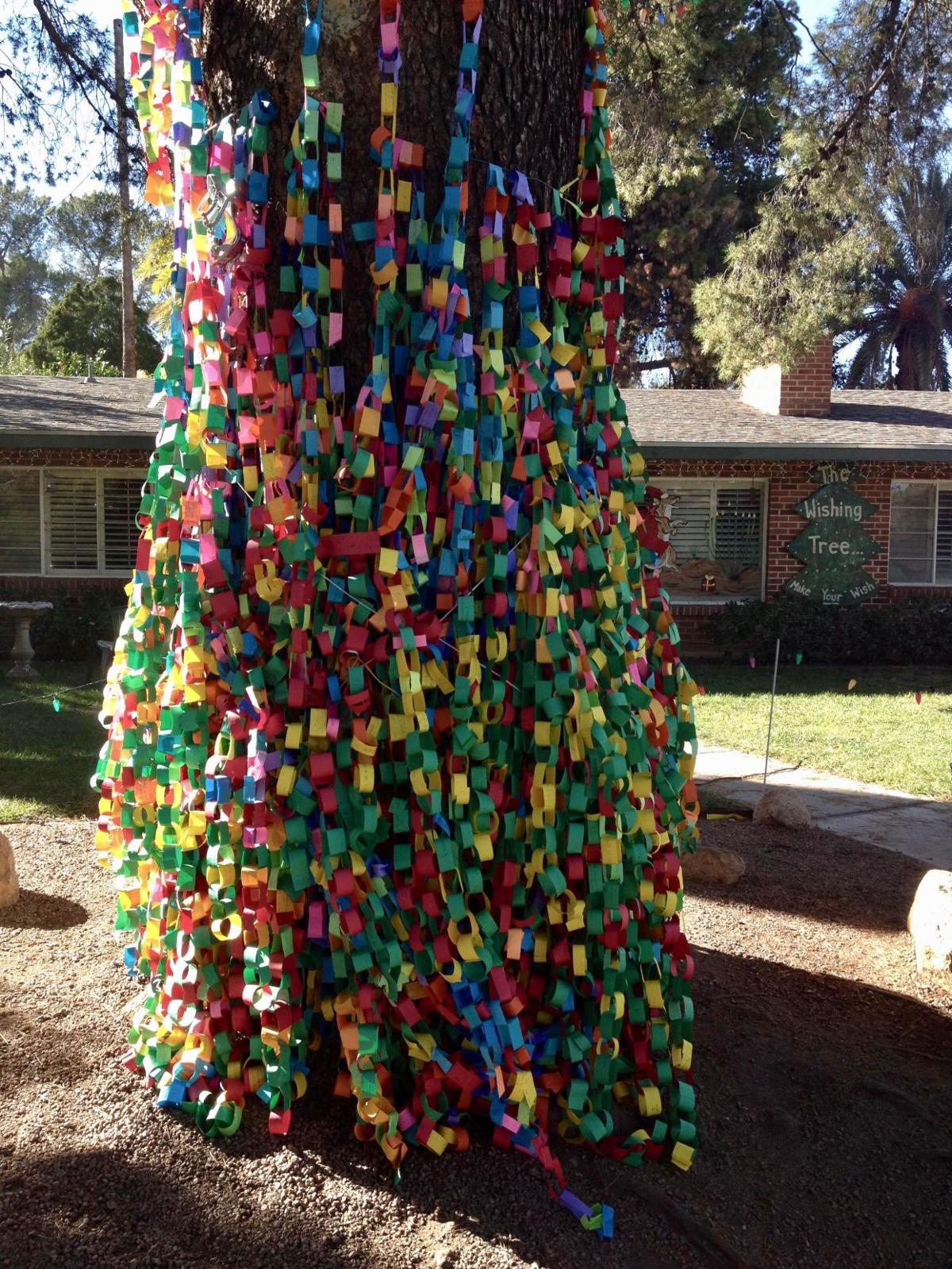 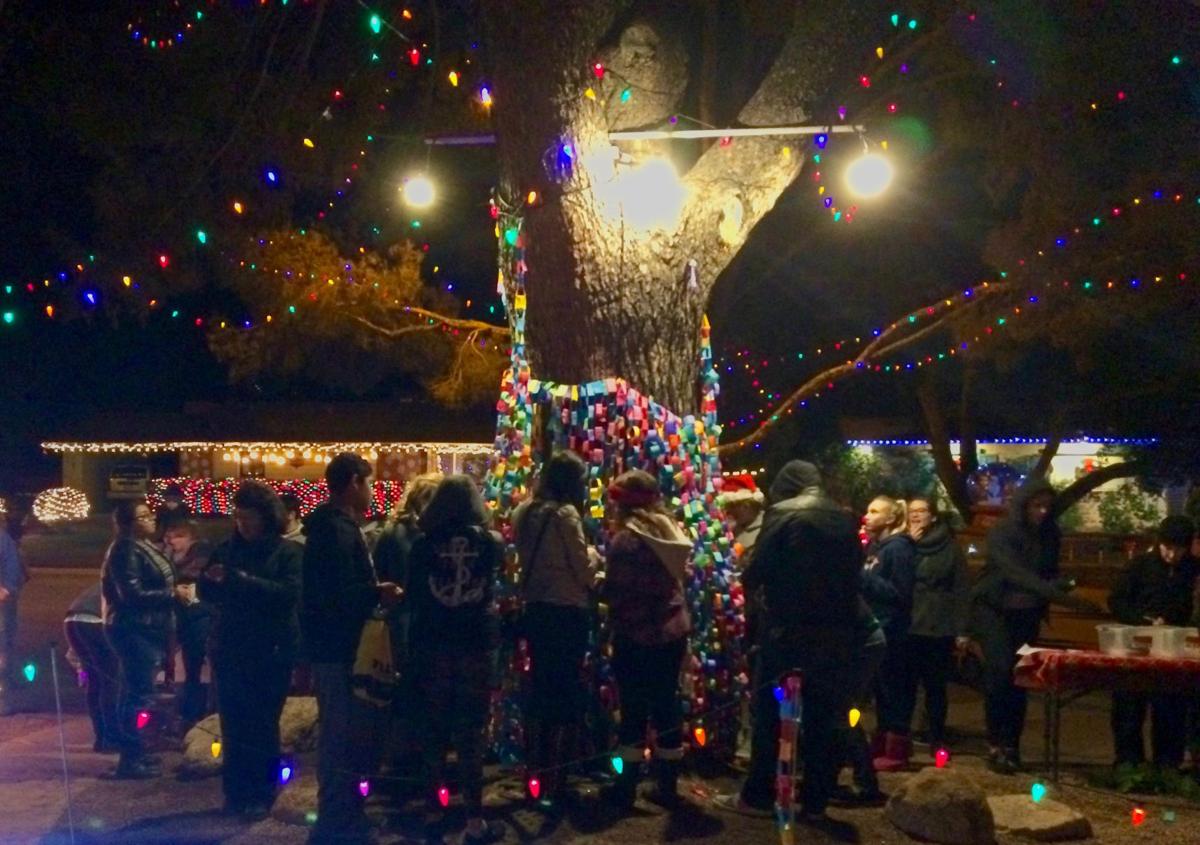 A crowd gathers outside of the Wishing Tree. 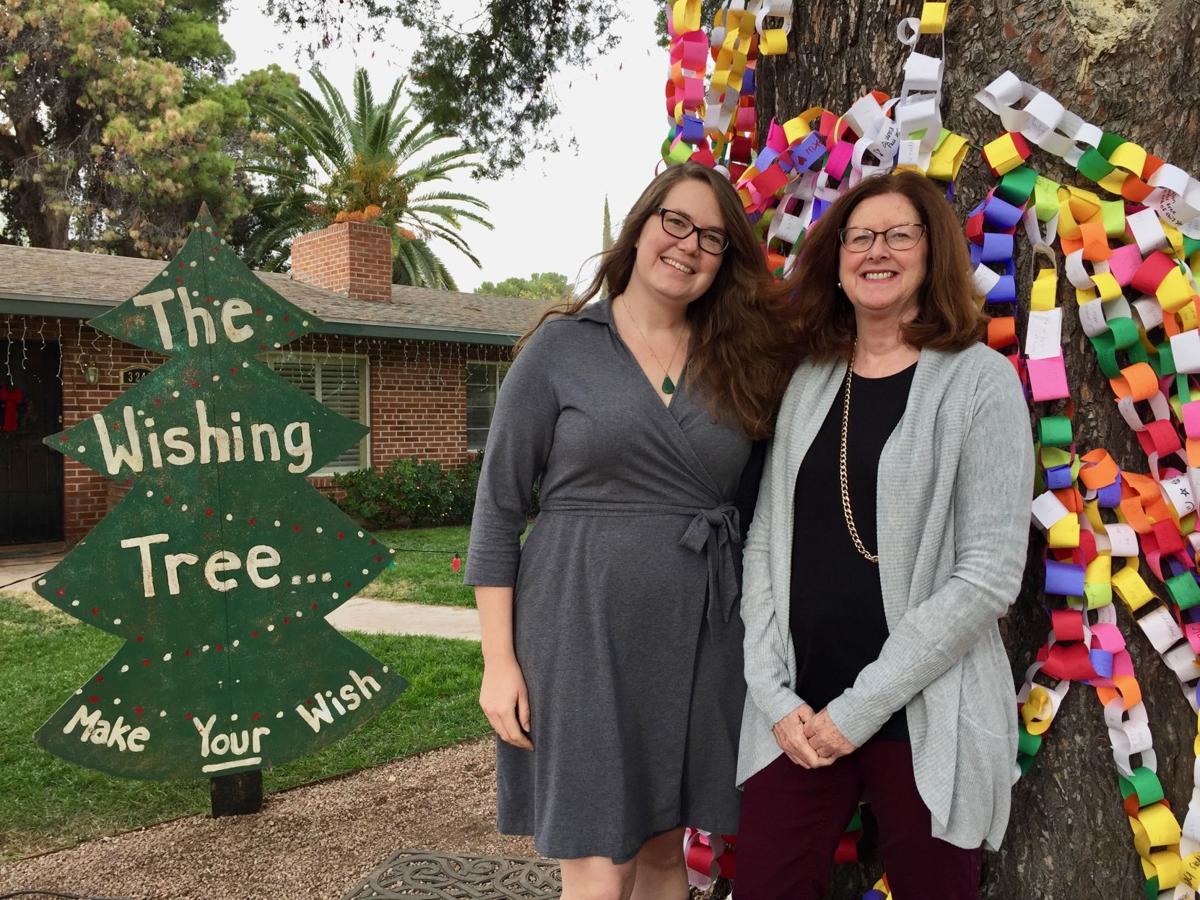 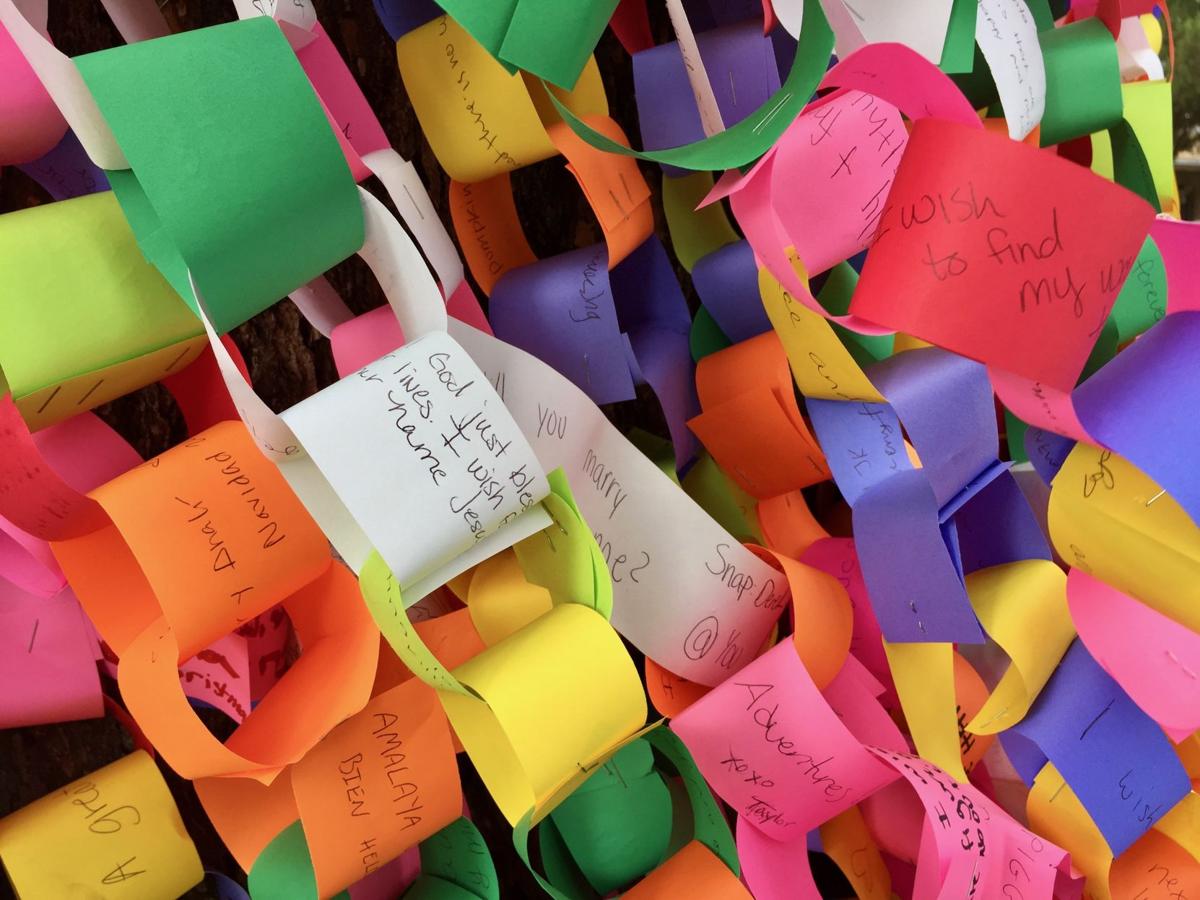 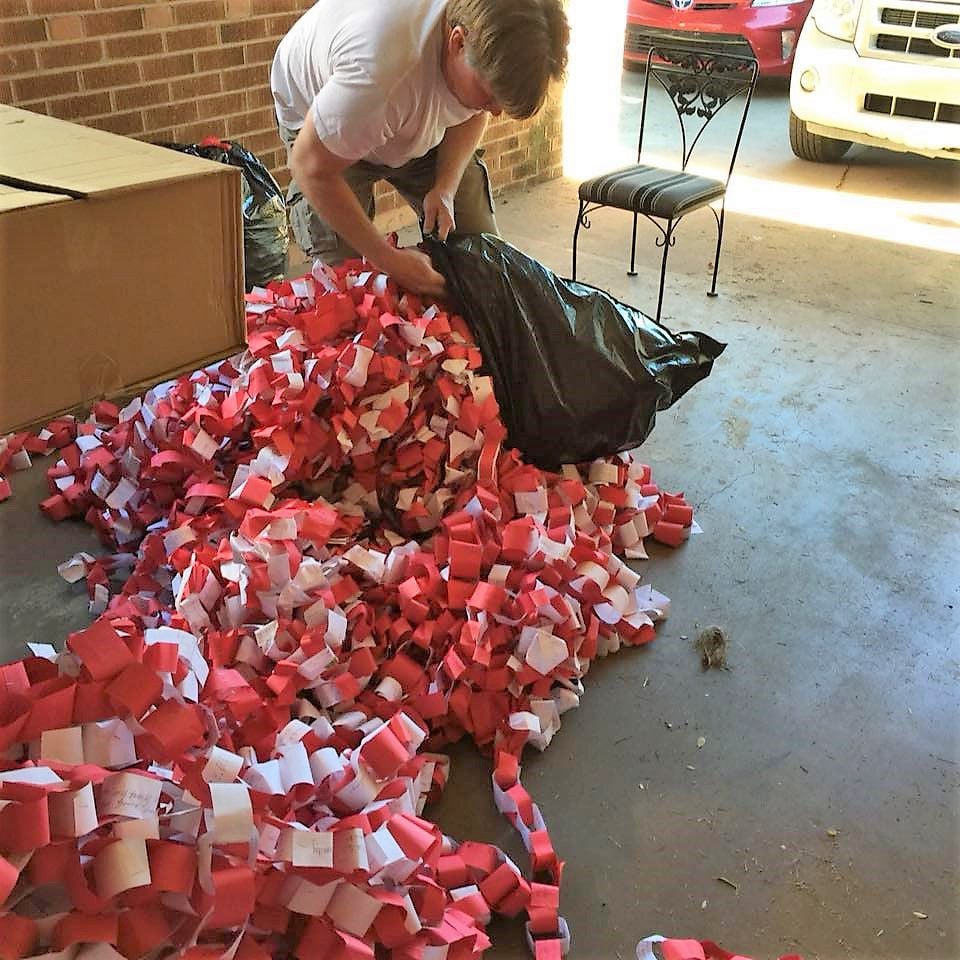 Every year, the family stuffs the paper chains into garbage bags to store them.

The wishes scribbled and stapled to Winterhaven's Wishing Tree each year actually double as data for a science project that began 18 years ago.

In 2000 as a seventh grader with a homework assignment, Liz Baker had a wish: To figure out if people were as bad as they seemed in news accounts.

"There were so many reports about materialism and people only thinking about themselves, so the tree was really just a way to collect data to see what people would wish for," Baker, now 29, says.

So, like any good scientist, she made her observations, asked a question and set up an experiment.

At the time the family had lived in their Winterhaven house on Christmas Avenue for a few years. Baker's father, Bill Bethel, grew up in the neighborhood, so they had already tinkered with some Winnie the Pooh Christmas decór for the annual Festival Lights.

The first year the family set up the Wishing Tree, more than 2,000 wishes dangled from the tree, looped together as paper chains. Baker, with a bit of help, analyzed each wish.

"The results were really heartwarming — 73 percent were not materialistic," she says. "And people wished for others more than themselves. The top five wishes were peace, love, happiness, health and to have a merry Christmas."

When Baker presented at the science fair, people spent hours reading — some crying over — the wishes.

"Some of the wishes were just so touching," Baker says. "People really reveal a lot about themselves, so we decided as a family to continue to do the tree."

It's quite the undertaking for the family of four.

Each year, they cut hundreds of strips of paper, order boxes of staples and staplers on Amazon and spend their December evenings replenishing supplies and picking up trash.

When it rains, someone bolts outside to wrap the tree in Saran wrap. When the wind blows, Baker's mother Kathleen Bethel says she'll chase the stray wishes down.

In recent years, with Baker moved out, Bill and their younger daughter Meagan Bethel have shouldered the responsibility of Wishing Tree maintenance, Kathleen Bethel says.

And it's a responsibility that has grown.

Almost 20 years after that original science project, the tree averages about 18,000 wishes a year.

Most nights, the family sits outside with a fire. Sometimes, when they're inside, they'll hear someone call, "Hello, people in the house! There's not staples!" Bethel says.

The biggest problem is storage. In 18 years, they've never thrown away a wish. Instead, they stuff the paper chains in garbage bags, labeled by the year.

"Do not ask my husband about that," Bethel says, laughing. "We keep them in every nook and cranny, every shed, the attic space, everything, because Liz and I cannot bear throwing away these wishes."

During her senior year of high school, Baker returned to her Wishing Tree experiment, analyzing more than 25,000 wishes to evaluate trends. Another win at SARSEF sent her to the Intel International Science and Engineering Fair, where she won second place.

"We never planned to save the wishes," Baker says. "I think it was a lot of whining on my part. We have to save them! It's the data! The data! What if I want to do a Ph.D. someday?"

At the very least, they want to write a book. Then — maybe — they could part with the scraps of paper.

For all of the holiday warm fuzzies that the Wishing Tree represents, it also symbolizes the prevalence of science in anything.

Bethel is the now CEO of the SARSEF and Baker is its deputy director.

Because the tree and tradition grew out of a science project, Baker uses it as an example when she encourages kindergarteners through high school seniors to take an interest in science.

"So many people think science has to be expensive and you have to have laboratory equipment and chemicals and there are all of these stereotypes ... but all you really need is a pen and paper, and in this case, staples, and you can make something happen," Baker says.

In addition to its annual science fair, SARSEF works with students, teachers and parents to make science feel accessible — especially for students in Title 1 schools which serve low-income children.

"We encourage kids to take their area of passion and do a project on it," Bethel says. "So for Liz to use the Wishing Tree as an example with the kids is perfect. It cost nothing."

Rather than picking a science project from an online list of "best science fair ideas," SARSEF encourages students, parents and teachers to figure out what interests a kid — bugs? fashion? books? — come up with a question and figure out how to test it. They're all about creating a future workforce that knows how to think critically and problem solve, no matter the field.

Baker's own interest in science began when she won a trophy for a third-grade project.

"Getting a trophy for working really hard and using my brain completely validated me and that's what inspired me to keep going," Baker says. Although her interests fluctuated to art and photography, she landed back on science during a project studying gibbons at the zoo.

That's how Bethel, a retired Sunnyside Unified School District principal, got into SARSEF. She (and her younger daughter Meagan) saw how winning science fairs and the subsequent scholarships empowered Baker. She wanted to do that for other kids and as CEO has focused on outreach that increases the diversity of students SARSEF serves.

"When you pick something that matters, you never know what it will turn into," she says.

With 18 years of wishes stashed, the Bethel family could track consumer trends and the evolution of gaming consoles or identify moods caused by world events and politics. After Sept. 11, altruism spiked, they say.

They have heard stories of babies born, families reunited and couples engaged, with credit given to the Wishing Tree.

Year after year, people knock on their door to tell them about wishes come true. Bethel recalls a mother who wished to reconnect with an estranged daughter. Writing her wish down made her realize the depth of the desire and motivated her to take action. The mother — and her daughter and grandchildren — left a letter in the Bethels mailbox to share the story.

Proposals under the tree are common, as are 1-year-old babies whose parents wished the previous year for a child.

The data collected is diverse.

Just a quick perusal of the tree this year revealed wishes for peace, comfort, unicorns, the return of Jar Jar Binks to the Star Wars films and booty.

"You'll see some really sad ones," Bethel says. "I wish my grandfather's cancer would go away. I wish my dad wouldn't kick my dog. I wish my brothers and sisters and I could go home; CPS took us out of the house. One kid wished for a sandwich."

And then, of course, are the X-rated wishes, scrawled most likely "by teens who come late at night," she says.

Most nights they love the community the Wishing Tree attracts. Most nights.

"By the end of the two weeks, you're ready for it to end," Bethel says. "You don't have one night where you're by yourself. You just know that for two weeks at 5 p.m. you need be home and not go out and just hunker down and be ready to open the door ... Because everyone who has ever known you and knows that you live in Winterhaven stops in."

Last weekend when the Festival of Lights began, a moving truck — not theirs — parked near the Bethel home sparked panic among visitors.

"There were so many people who came up and were like, 'You guys are moving? What will happen to the tree? Will the people moving in take over the tree?'" Bethel says.

They don't see how they could stop doing it now — not when 20-somethings stop by with stories of making wishes every year since childhood.

"There are hilarious ones and tragic ones and heartwarming ones," Bethel says of the wishes that hang from the tree. "And there are the ones that restore your faith."

Where: Between East Prince and East Fort Lowell roads and North Tucson Boulevard and North Country Club Road. The Wishing Tree is on Christmas Avenue, north of Fort Lowell.

Cost: Free, but you can bring money or food for the Community Food Bank of Southern Arizona.

Las Posadas, an 81-year-old tradition brings a Tucson neighborhood and school together

65 amazing things to do in Tucson this December 🌵❄️🌵

Fill your December with fun things to do

A lovely tribute to our town.

Meet you at the top of Mount Lemmon to build a snowman!

Get ready to feel the Tucson holiday cheer this weekend as the neighborhood of Winterhaven kicks off the 69th annual Festival of Lights.

Get ready to feel the Tucson holiday cheer this weekend as the neighborhood of Winterhaven kicks off the 2019 Festival of Lights.

Where's your favorite spot in Tucson to get scratch-made cookies?

Did you see the proposal at Winterhaven this week?