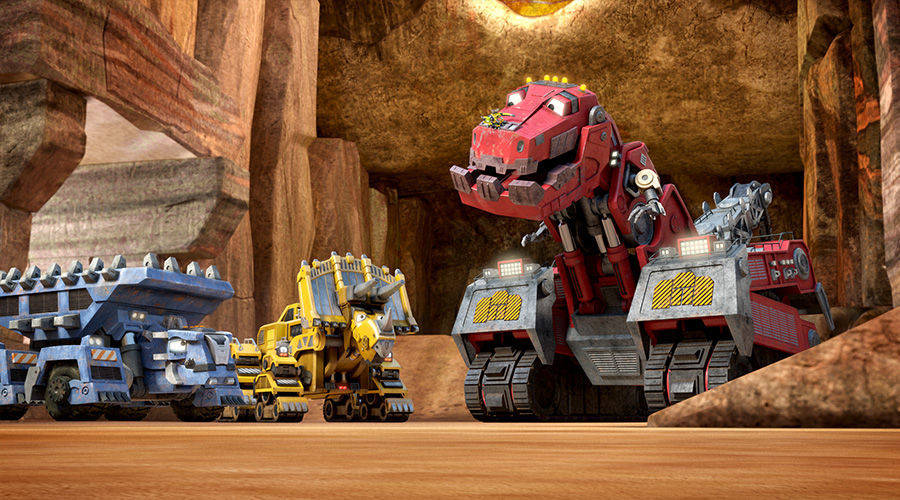 The animated series appears on Netflix. Chris Gall is happy to have the exposure there. 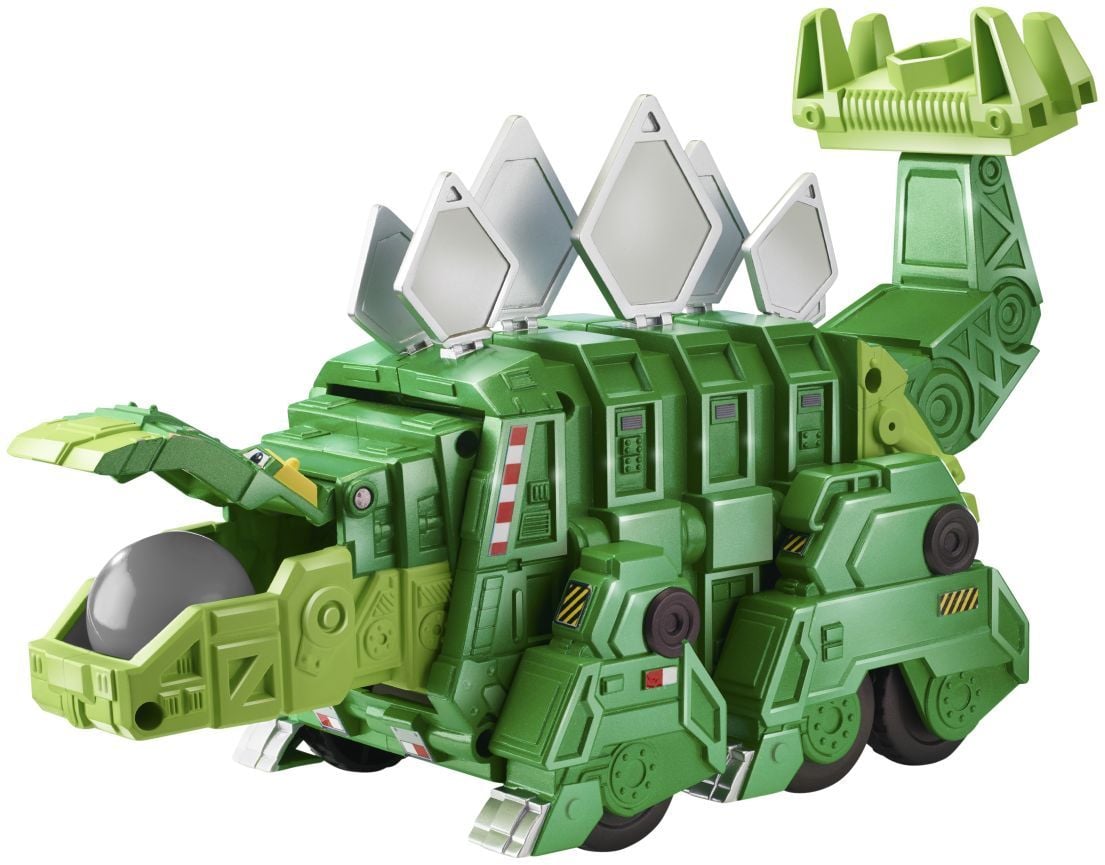 Toy version of the “Dinotrux” character Garby. The toys are sold at Toys R Us. 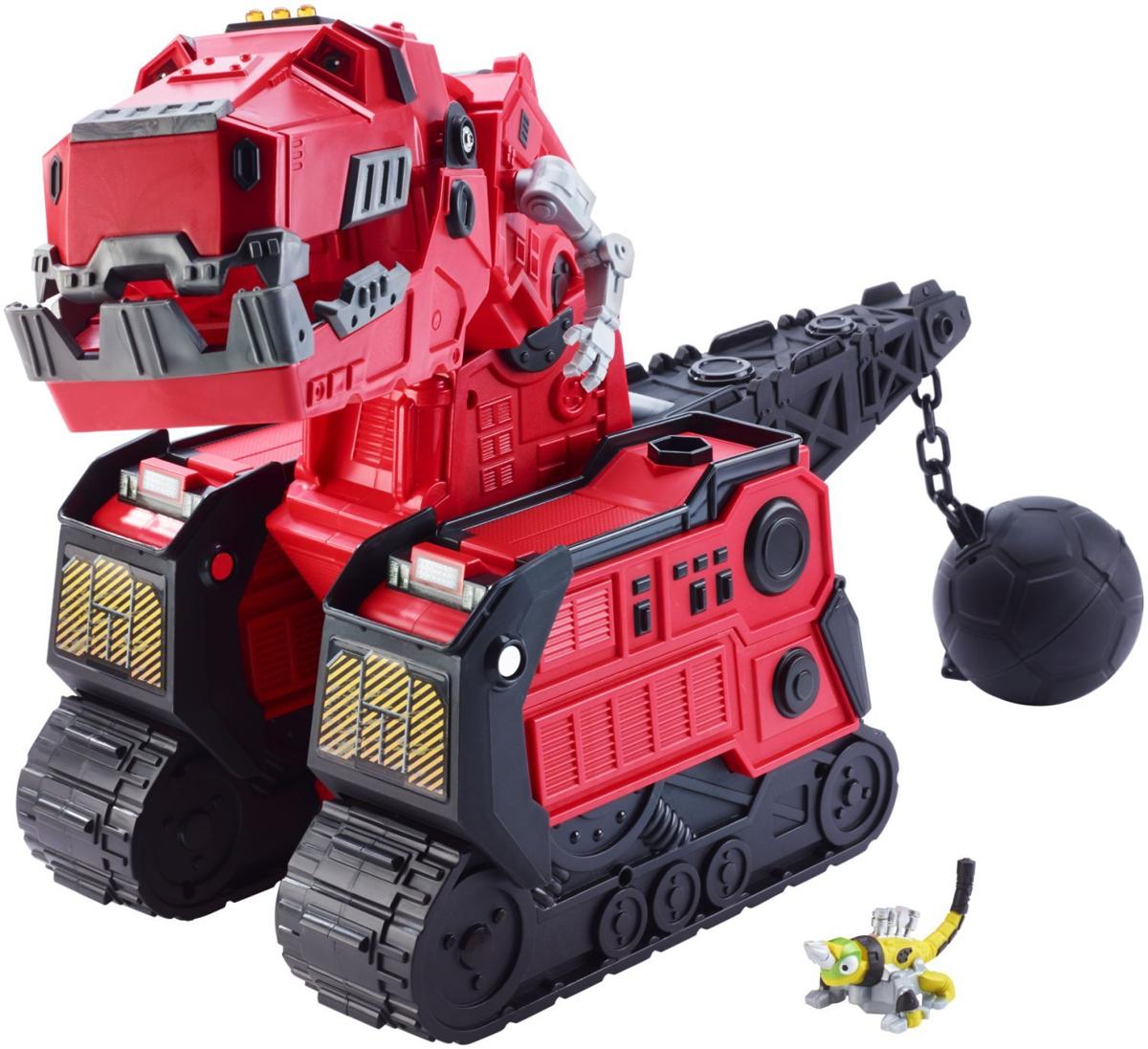 Gall first imagined dinosaur-machine hybrids when he saw earthmovers and thought their cabs looked like a dinosaur’s head. 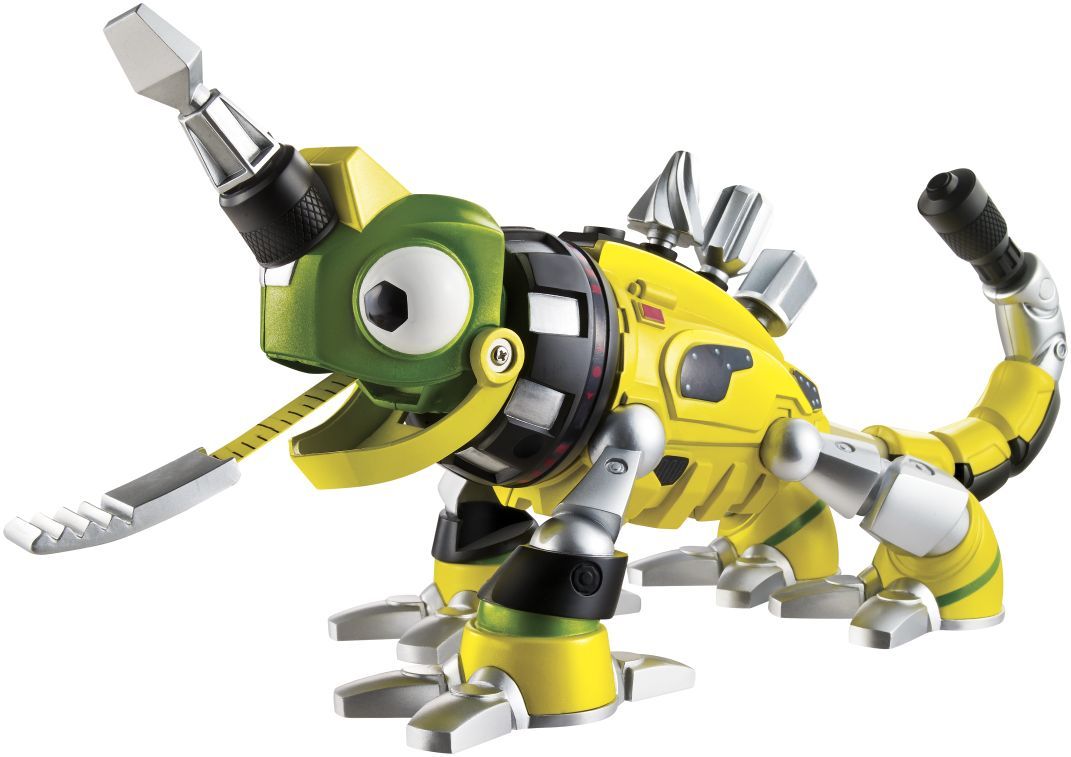 Growing up, Chris Gall wanted to be a novelist. But the creator of worlds where dinosaur trucks roam the earth and tentacled monsters teach class found that in this universe, at least, a picture is worth a thousand words.

“At some point I decided I was getting a lot more attention for drawing pictures,” he said. “In high school in particular, you can’t get a friend to read a short story to save your life, but you can get them to look at the cool hot rod you just drew.”

These days, the Tucson author and illustrator is getting considerably more attention than he did in those early days. The cartoon adaptation of “Dinotrux,” arguably his most popular book, premiered in August on Netflix. A line of toys based on the series is now for sale at Toys R Us.

Dinotrux is one of several books the 1985 University of Arizona graduate has written and illustrated, including “Dog vs. Cat,” “Dear Fish,” “There’s Nothing to Do on Mars” and “Awesome Dawson.”

Gall, 53, worked as a freelance illustrator for years after he left his first job as an art director at Tucson advertising agency Nordensson Lynn & Associates in 1990. His award-winning work has appeared in local and national publications, including Arizona Highways, Newsweek, Fortune, the New York Times and the Washington Post.

Always looking for a creative outlet, he made a serious run at standup comedy in 1998, working as a professional comic for about five years. While he eventually decided that business wasn’t for him, comedy brought him back to writing and set him on the road to becoming a children’s book author.

“Writing jokes is a lot like writing in short form for children because you have to keep things simple; you can’t have a lot of extra stuff,” he said. “It teaches you to be concise in your writing and how to reach your audience in the most effective way.”

The Star spoke with Gall about children’s book publishing, the “Dinotrux” phenomenon and working with Hollywood.

Q: Was it hard to go from illustrating to children’s book publishing?

A: It was a big adjustment. I’m glad I knew nothing about it because the more I had known at the time, I might have been discouraged right off the bat. I’m glad I was really naive about it all because the learning process is still going on.

Q: Was it difficult to be published?

A: My favorite saying is, “The hardest thing in the world is to get published,” just to get your foot in the door. But in reality, that’s going to be the easiest thing because the rest of it is, “Well, how do you sell your books?” And if you don’t, then you don’t get to keep publishing. That’s the bigger challenge — how do you sell books? How do you reach your people?

A: I wish it were. In publishing, you can do the best thing in the world and your publisher can be loving it, but in the end, people have to find it and people have to buy it in numbers.

Unlike any other genre, where the consumer is the purchaser, in picture books it’s parents who are buying the book for their child. So you kind of have to reach both of them. The parents have to think, “Oh, this is going to be great,” and the kids have to think that, too.

Q: How did “Dinotrux” start?

A: “Dinotrux” was my fourth book. I was looking for my next title, and I wanted to do a truck book because I like trucks and I’m a car guy — I’ve restored them, I’ve worked on them, so I wanted to do something with trucks ...

One day I was driving around and saw these big earth movers working on I-10. Those earth movers have a cab in front — looks like a head — it kind of bobbles around as they’re grinding about, and I immediately said, “Wow, that sure looks like a dinosaur.”

Q: Once the publisher buys the idea, is there a deadline?

A: Always. There’s a publishing schedule, whatever season they decide. Everything works so far in advance, especially in children’s (publishing), that usually it’s a two-year horizon. Typically, when you’re done with a book and it’s off to the printer, there will be a year before it comes out in a store.

Q: When were the rights to “Dinotrux” purchased?

A: DreamWorks offered an option before the book came out. An option is different from an acquisition. An option kind of rents your property for two to three years. They give you a small amount of money and it locks out other competitors. ... A lot of times titles get purchased and they become nothing. In fact, it’s probably about 95 percent of all books that get the rights sold never see the light of day. You still need a lot of luck after the purchase phase.

Q: How much input did you have on the TV show?

A: We have a good working relationship. Though I had no veto power, I was involved in just about every step of the way in some way, consulting or discussing. I wrote a lot of the treatments for the early scripts — which all were not used. But they were really great about it, very transparent. It’s a very talented group of people over there.

Q: Are you happy with the show being on Netflix?

A: It was definitely great news, because it’s the new thing, it’s the new paradigm, the new model for distribution. I was very happy about that.

Q: What about the toys?

A: I was curious what the characters would look like. Would they look like chubby little Fisher-Price toys or would they look like Transformers? They ended being more articulated, more machinelike, and I was very happy with that because that’s where I think they should be.

Q: Have you watched every episode?

A: Oh, yeah. I’ve watched them all. Ten were released in August. I’ve seen them all at least three times all the way through. I study little stuff, appreciating the small details most people miss if they only watch it once.

Q: It’s all been a good experience for you?

A: The books went selling through the roof as soon as the show came out. There’s been no downside that I can think of, nothing at all, and it brings my characters into millions of homes around the world. That’s pretty cool.

A pocket mouse, a hungry fox and Southwestern sand dunes.

Gall's 'Dog vs. Cat' a parable on learning to cooperate

If you've ever shared a bedroom, you can relate to Chris Gall’s new book “Dog vs. Cat.”

The animated series appears on Netflix. Chris Gall is happy to have the exposure there.

Toy version of the “Dinotrux” character Garby. The toys are sold at Toys R Us.

Gall first imagined dinosaur-machine hybrids when he saw earthmovers and thought their cabs looked like a dinosaur’s head. 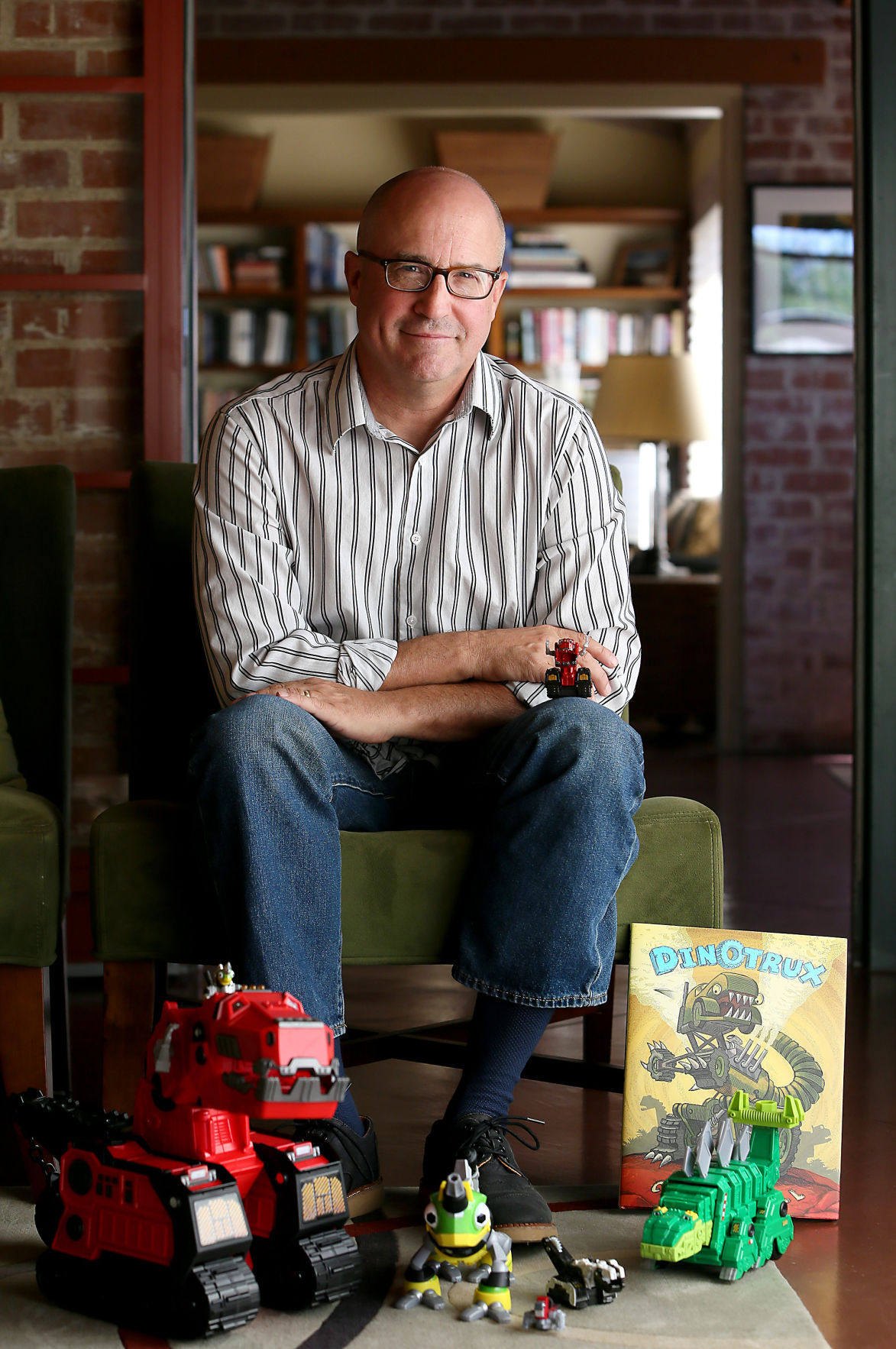 Chris Gall is the author and illustrator of the “Dinotrux” children’s books series. DreamWorks makes a cartoon adaptation that appears on Netflix.