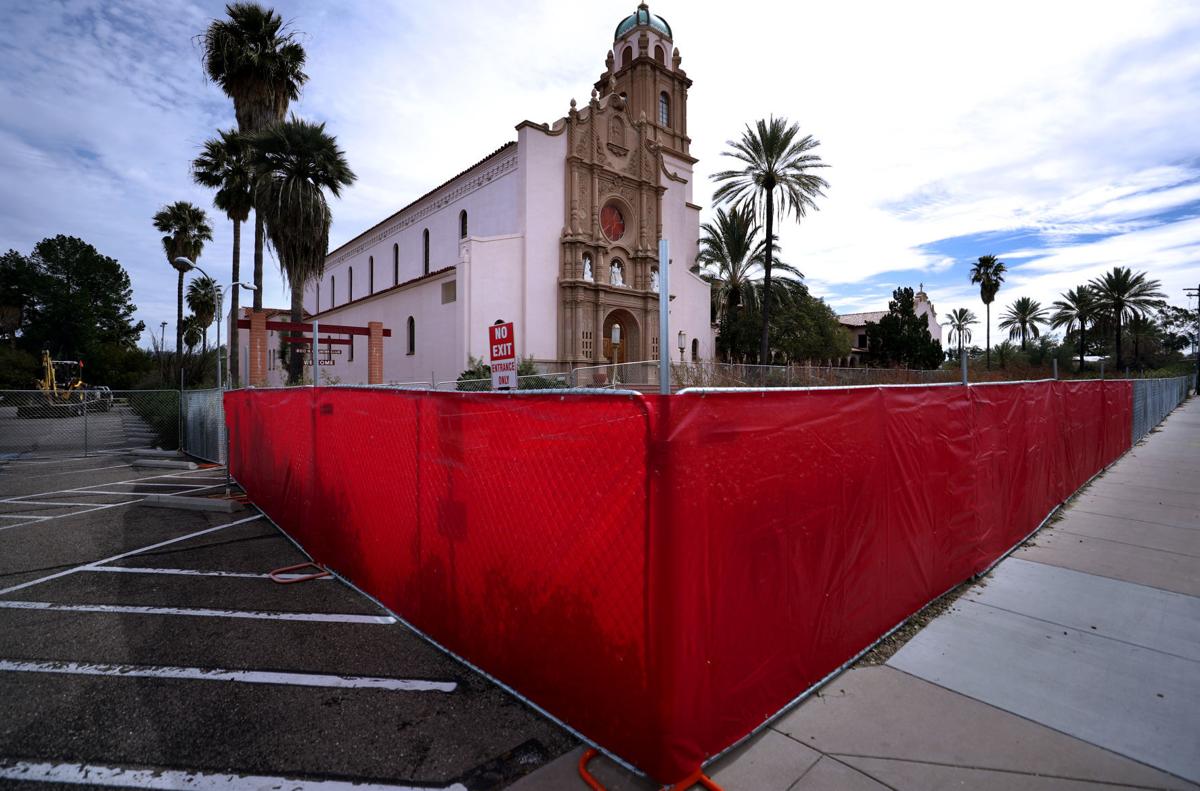 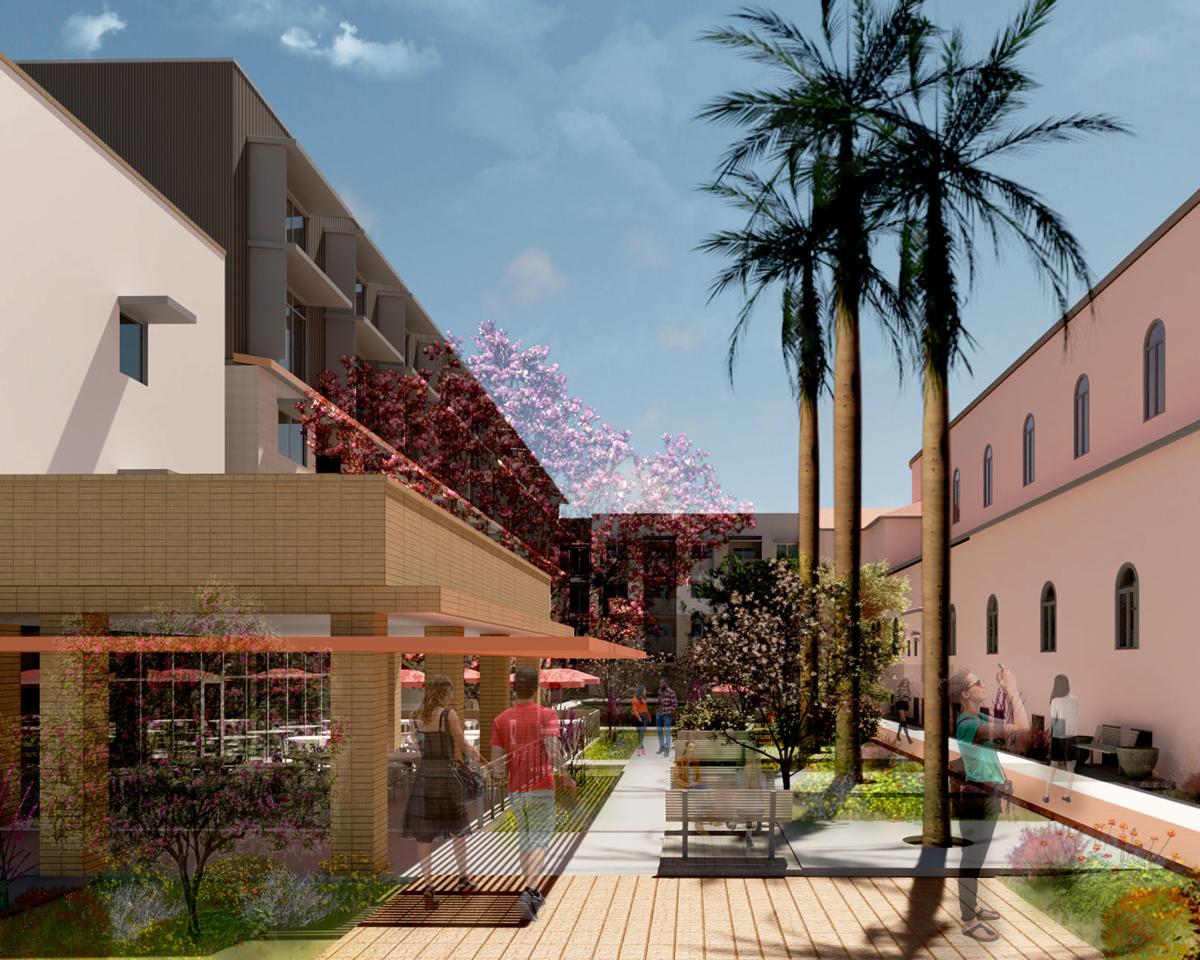 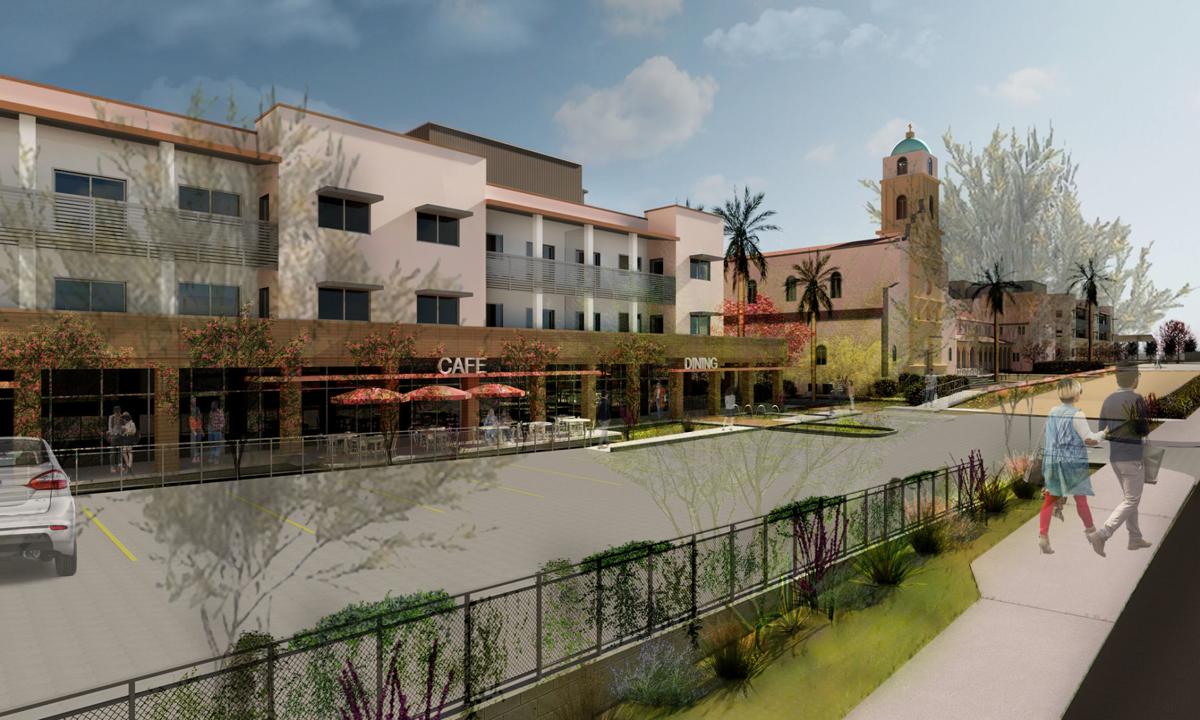 A modern luxury apartment complex is going up at the site of Tucson’s iconic Benedictine Monastery after more than two years of negotiations, compromises, concessions — and sometimes name-calling.

Newly released renderings show two structures to the left and right of the midtown monastery, 800 N. Country Club Road, and a third rising up from behind, designed to accommodate a total of 255 apartments. Another 34 apartments will be located within the monastery itself.

Under the direction of general contractor Sundt Construction, crews have started preparing the grounds, with construction expected to be completed within two years.

“It feels great to get started,” said Corky Poster, the architect with Poster Mirto McDonald, who has been working with developer Ross Rulney on the design.

“It has been controversial but, when it’s over, everyone will be pleased,” Poster said. “We are very proud of this project.”

The duo held multiple meetings with neighbors over initial height proposals and uncertain use of the monastery itself. Early on, they were at odds with city leaders, who were getting a lot of pushback from neighbors that did not want the development.

“The problem I had was it was a foregone conclusion that it was going to be a very dense project,” said Brian McCarthy, a resident of Sam Hughes Neighborhood for 44 years, who was asked to sit on the design review committee. “My input was to try to get some design elements included that would make it look less ominous in scale.”

For example, McCarthy said, developers agreed to make the apartments look modern instead of trying to create “fake old buildings.”

“Everyone involved was very professional, willing to listen and engaging,” he said. “Developers do what they do because their motivation is to make a lot of money, but I think they were respectful of the existing building.”

In addition to housing, there will also be a retail component in the monastery building, such as a coffee shop or restaurant, that will be open to the public.

Poster said many young professionals and empty-nesters have been vocal about wanting to live in the area, but are unable to afford to buy a house there. Rents will be determined by market rates when the complex is finished.

“We are pleased that we’re using this site to provide quality housing for those that are not served in midtown,” he said.

The Benedictine Sisters of Perpetual Adoration occupied the 80-year-old monastery until they relocated to Missouri and sold it to Rulney in 2017.

Since announcing plans for an apartment development, Rulney has gone round and round with neighbors and city leaders regarding the preservation of the monastery, scope of new construction and saving as much of the orchard as possible.

A private foundation stepped in to help transplant and graft some of the trees.

Some of the avocado, peach, pomegranate, date and orange trees will be preserved at the Mission Garden site, 946 W. Mission Lane, which has orchards and vegetable gardens that represent 4,000 years of agriculture in Tucson.

Rulney agreed to file for historic designation of the monastery so it will be protected from demolition, even if ownership changes in the future.

Last year, the monastery was home to Central American asylum seekers while it sat empty during the rezoning process.

What began as a plan for seven-story complexes on either side of the monastery has been lowered to structures of 3, 4 and 5 stories with a max height of 55 feet.

“There have been a lot of people who have invested a lot of time in getting this project to where it finally is,” said Ward 6 Councilman Steve Kozachik, who bore the brunt of neighborhood angst.

“The community recognized the importance of the asset and came together with Ross and his team to craft a project that respects the heritage of the site while also recognizing the investment he and his investors are making.”

For his part, Rulney said he is thrilled to see it finally get started.

“It has been a long process with many twists and turns but, in the end, we were able to bring the community together with overwhelming support for this project,” he said. “With the design of Poster Mirto McDonald and the experience of Sundt Construction this will be the highest quality multifamily development.”

Developers and contractors will host a community meeting to give residents information on the construction at the Benedictine Monastery and its impact on the surrounding neighborhoods and traffic.

Additions will include more meeting rooms and event space.

The greenhouse, opened by the Crop Sciences Division of Bayer, will grow conventional corn and genetically modified corn. About 100 humans will work alongside the robots.

The Tucson-based shoe store is now open at the Spectrum shopping center, near Interstate and Irvington Road.

Sundt reported more than $1.7 billion in construction revenue during 2019, up from $1.4 billion in 2018. Its work on many Tucson-area projects added to those totals.

Proposed development would build 208 homes on Tucson’s southwest side

Developers plan to keep 44% of the now vacant 60-acre lot on West 36th Street and South La Cholla as open space, but are asking the city to allow higher density housing.

Benedictine Monastery site to include restaurants, gym and office space

The historic site will have more than 200 apartments surrounding retail space.