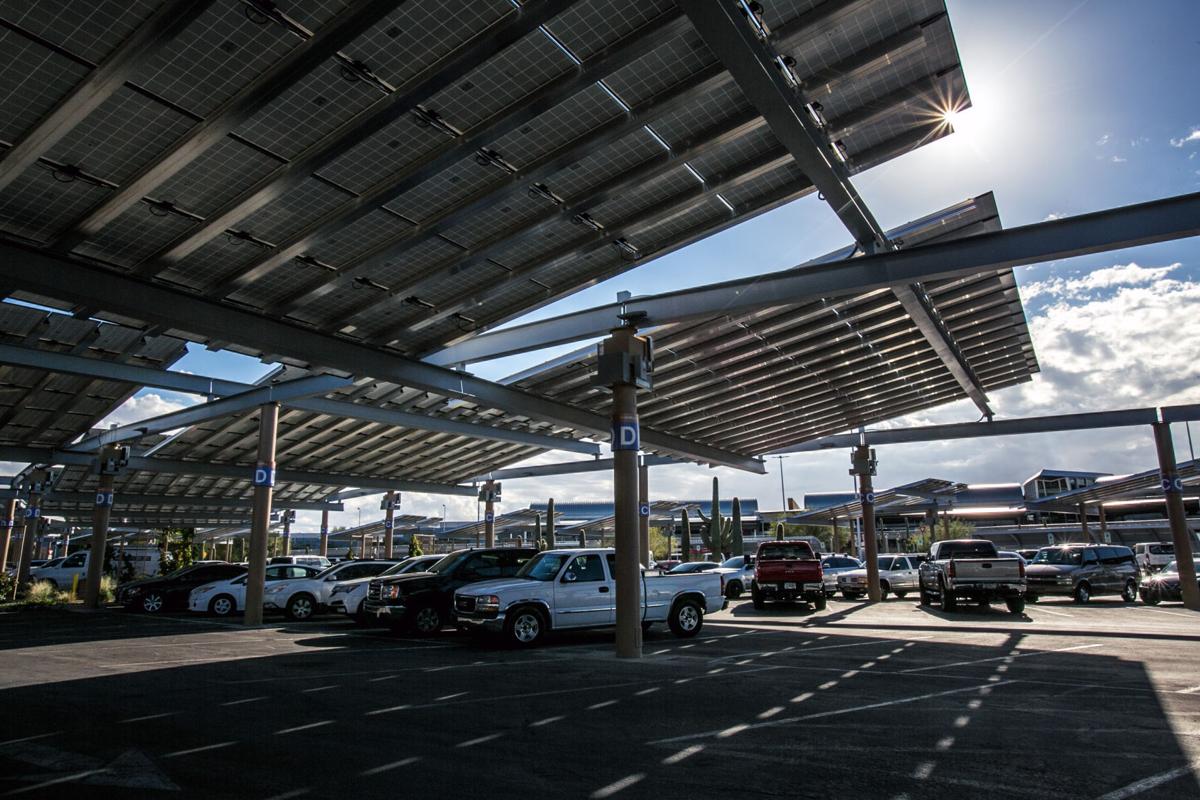 The sun peeks out from the corner of the completed photovoltaic array project over the hourly and daily parking lots at Tucson International Airport on Wednesday. 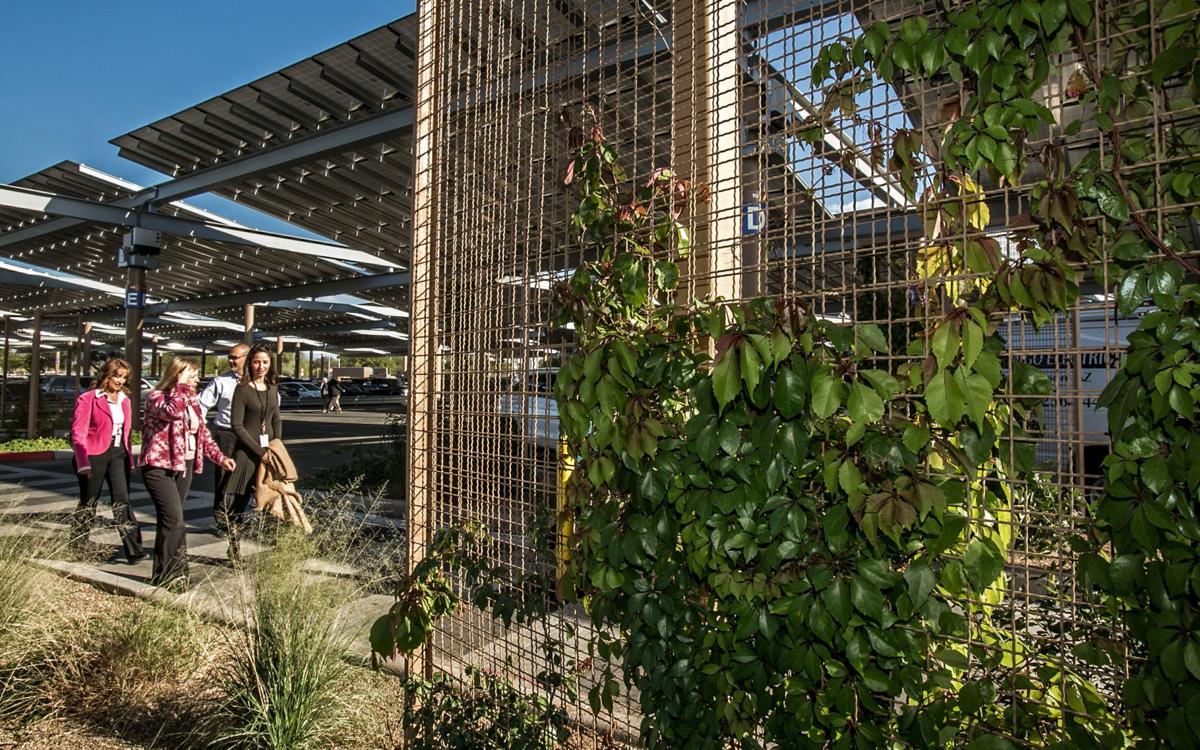 Living walls have been planted to enhance the landscaping of the parking area as part of the completed photovoltaic array project at Tucson International Airport over its hourly and daily parking lots in Tucson, AZ. on December 6, 2017.

The Tucson Airport Authority on Wednesday marked the completion of a solar-energy array over its hourly and daily parking lots.

The solar array will offset upwards of 50 percent of energy needs for Tucson International Airport’s terminal.

The $14.3 million project, funded mainly by grants from the Federal Aviation Administration, is expected to save the airport about $35,000 a month on its energy bills.

The project was started in 2013 with a first phase of 1 megawatt (AC) of photovoltaic panels going up in an arced array that shades hundreds of hourly and daily parking spaces in from of the terminal.

A second phase added another 1.5MW of capacity for a total of 2.5 MW.

Steel-mesh trellises line the walkways and, as climbing plants begin to fill, are expected to create a cooler micro-climate in a parking area.

Perhaps just as important as the energy savings, speakers at a ribbon-cutting ceremony said the array symbolizes Tucson’s commitment to technology and renewable energy.

“It’s one of those iconic projects for Tucson – it’s the first thing people will see when they arrive in Tucson and the last thing they see when they leave,” said Mayor Jonathan Rothschild, citing Tucson’s recognition in the U.S. Department of Energy’s Solar America Cities program.

And the shade the large solar panels make is a pleasant bonus, Rothschild added: “In Tucson, we love solar. In the summer, we love covered parking.”

TAA President and CEO Bonnie Allin said the solar project wouldn’t have been possible without grants from the FAA, which funded 91 percent of the work, along with funds from the Arizona Department of Transportation with a matching contribution by TAA.

“It takes a vision to do this, it doesn’t happen by osmosis… and now it’s part of the passenger experience,” McClardy said.

Overall, the airport solar project will carry environmental benefits equal to a reduction of 25,000 gallons of gas burned and 245 tons of carbon dioxide per month, the airport said.

The project’s solar panels also point to the east, rather than the optimal south-facing arrangement, to avoid creating glare around the airfield, Monrad said.

Tucson International Airport has the second-oldest commercial air traffic control tower in the country. Soon it will have the newest.

Neutral-site victory a big one for program that's struggled so far this season.

The Arizona Wildcats earned their biggest win of the season on Tuesday, when they beat No. 7 Texas A&M in Phoenix. Here's what coach Sean …

Tucson Police officers responded to a reported shooting in the 1300 block of East Irvington Road. Officers located a victim in the alley south…

Man said he had been assaulted and robbed several days earlier.

Report: Marana mom admitted to boyfriend that she stabbed her infant

The baby is expected to make a full recovery.

In the video, a perp in green tights slinks around a dark parking lot trying to break into cars.

Highlights from the UA's media availability after practice Thursday afternoon as the team continues to prep for Purdue.

Was chief of the department since 2011.

Attorney general contends the tuition charged at the state's three universities fails to comply with a constitutional mandate to be "as nearly free as possible.''

Lea Marquez-Peterson's long-rumored campaign for Congress is a go.

Temperatures will peak 4 to 10 degrees below average.

Woman displaced by apartment fire on Tucson's east side

The woman's apartment sustained water damage after a fire in the neighboring unit.

Man said he was assaulted by two people who took his belongings and clothes.

Police say that the victim and suspects knew each other.

The Prescott Valley police chief who lost his handgun last month will be suspended for two days without pay.

The Arizona Republican had announced only Thursday that he would leave the House over accusations that he asked two former aides to bear his child as surrogate mothers.

The death of the 21-year-old rapper on his tour bus prior to a Nov. 15 concert at The Rock, has been certified as accidental, according the Pima County Office of the Medical Examiner.

The shift from digital nativism to brick-and-mortar is a marketing strategy.

About 45 percent of the farmers in Arizona are women.

The sun peeks out from the corner of the completed photovoltaic array project over the hourly and daily parking lots at Tucson International Airport on Wednesday.

Living walls have been planted to enhance the landscaping of the parking area as part of the completed photovoltaic array project at Tucson International Airport over its hourly and daily parking lots in Tucson, AZ. on December 6, 2017.