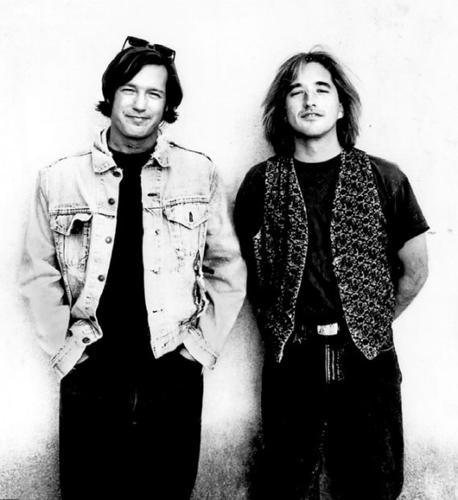 Rich Hopkins, left, and David Slutes were key figures in the Sidewinders, then the Sand Rubies, between 1985 and 1993. 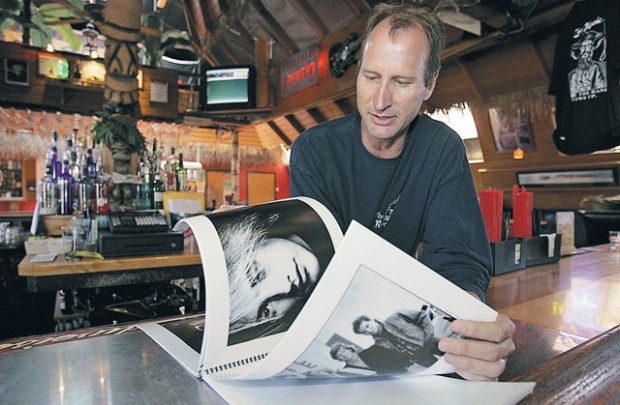 Douglas “Fini” Finical, managing partner at The Hut, looks through the pictures in the Sidewinders/Sand Rubies book.
By Dan Sorenson

If a band plays in the woods, is it making music? Yeah, but it's not popular music. Fans are needed for that.

And almost certainly there would be no coffee-table book about a Tucson band that first broke up 18 years ago without fans.

There'd also be no reason for The Hut to host tonight's combination farewell concert and book release for the Sidewinders/Sand Rubies.

"I was a big fan," says Douglas "Fini" Finical, 46, who operates the funky tiki bar in an old Quonset hut on North Fourth Avenue.

Finical says he spent a lot of his more youthful hours listening to the Sidewinders and Sand Rubies at Nino's and other local music venues in the band's bright, but troubled, run between 1985 and 1993.

Finical, with a background in graphic design, said he's not entirely sure that Sidewinders founders Rich Hopkins and Dave Slutes "got it" when he first proposed the photo book. But he says Hopkins and Slutes, as well as some other former members of the group, signed off on the idea and gave him access to their caches of band memorabilia.

The roughly 80 photos in the hardbound book - titled "Came on Like the Sun," a reference to a song by the same name from the Sidewinders' 1990 album, "Auntie Ramos Pool Hall" - are a combination of promotional photos commissioned by record companies and incidental snap shots and fan photos the band members accumulated.

The photos evoke memories of good times for Finical. They also give him that feeling of getting backstage, seeing things about this band that he wasn't around to see for himself - outtakes from record company photo shoots, snapshots from European tours.

This is a case where the fan actually knows something the artist may not. Band members may get their egos stroked by fame and publicity, but the fans are there because they love the music. They pay to be there. They choose to spend their time and money on a certain band rather than another one, or something else entirely.

Slutes said he first felt the idea of the photo book was an ego-serving concept, a puzzling celebration of a band that "made a minor blip" on the worldwide music scene. But he said Finical's approach, as a longtime fan, put it in different light.

"Their (fans') lives have been affected in some way, I get that," Slutes said.

Finical said he knew those photos would mean a lot to him and other fans. But, to the band, the photos probably sparked memories of what was going on when they were taken: the band burned through rhythm sections and Hopkins and Slutes had a period where they didn't get along.

"We were at each other's throats," Slutes said of the stressful period in the early 1990s caused by a lawsuit over the rights to the Sidewinders name and other legal bumps in the band's career.

Today, Hopkins is best known as the leader of Rich Hopkins and the Luminarios (sometimes aka The Casa Maria Band). He has a career that is bigger in Europe than in the U.S.

Slutes is best known today as the energetic talent booker for Club Congress and occasional appearances under an alias with spoofy lounge act The Zsa Zsas.

The Sidewinders, later renamed the Sand Rubies after a suit with a Carolina band that claimed first dibs on the name, were one of the biggest deals to come out of Tucson's music scene in the mid-1980s and 1990s. It was back in the day when major-label record deals mattered, and the Sidewinders landed more than one over the years. But the lawsuit and other legal problems held up release of a new album, stalling their career for more than two years.

A couple of their releases charted but never broke into the top 10 lists. They never had the big single - the radio hit that could have taken them to the next level of national recognition the way "Hey, Jealousy" did for Tempe's Gin Blossoms.

Since then, Slutes says, the band never really broke up, but hasn't played regularly. And more recently, since longtime bassist Ken Andre moved to Texas, he said it's difficult to keep the Sand Rubies going as a working band.

The fighting days with Hopkins are long over, Slutes said. "We haven't fought in so long. We're very lucky. We got to enjoy what we had. We got into it (the band) because of the music. We just wanted to make songs and be in a band."

Slutes said he didn't feel the need to do an official farewell show, but he understands that Hopkins does.

Even Hopkins hedges a bit about this being The Last Waltz for the Sidewinders/ Sand Rubies, referring to it at one point in a recent interview as "quite possibly our last show ever."

"I have some mixed feelings about it," Hopkins said of the goodbye show. "I guess there's a time and place for everything."

• What: The Sidewinders/Sand Rubies farewell show and photo book release.

Movies in a Minute: "Spoiler Alert"

Prince Harry has 'no early memories' of Princess Diana

Prince Harry has 'no early memories' of Princess Diana

Rich Hopkins, left, and David Slutes were key figures in the Sidewinders, then the Sand Rubies, between 1985 and 1993.

Douglas “Fini” Finical, managing partner at The Hut, looks through the pictures in the Sidewinders/Sand Rubies book.
© Copyright 2022 Arizona Daily Star, PO Box 26887 Tucson, AZ 85726-6887 | Terms of Use | Privacy Policy | Do Not Sell My Info | Cookie Preferences
Powered by BLOX Content Management System from TownNews.com.
You don't have any notifications.