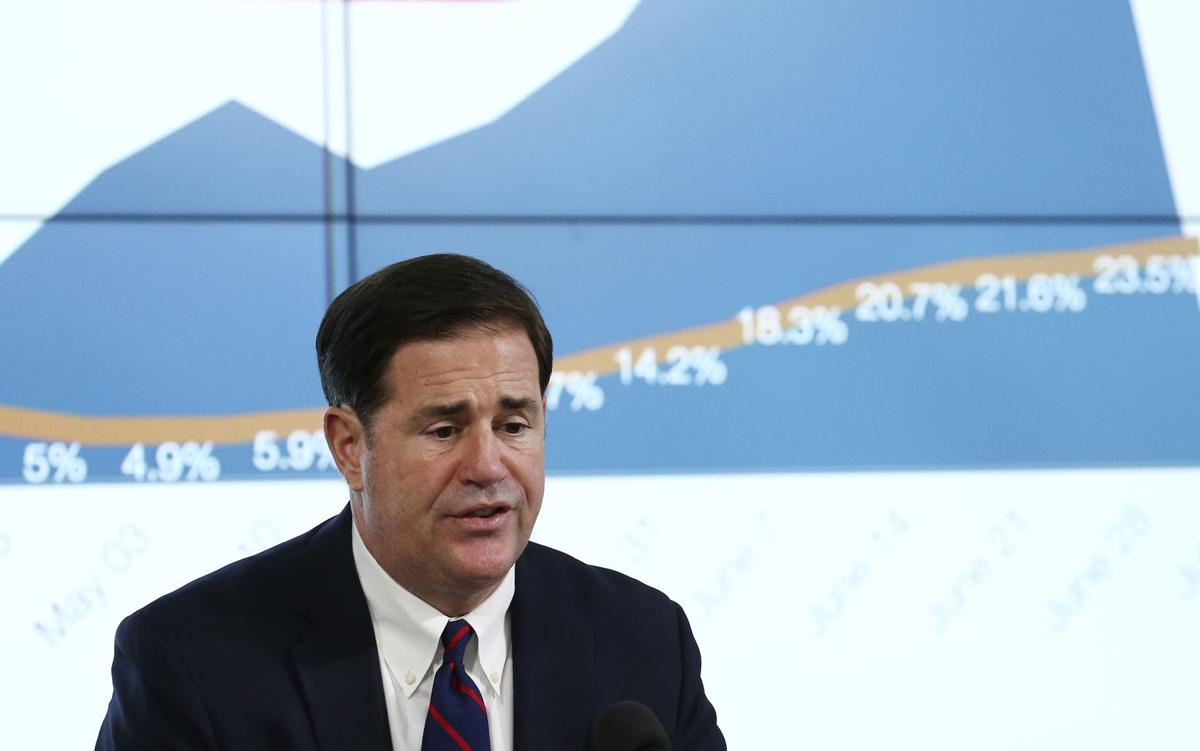 Arizona Gov. Doug Ducey acknowledged Thursday that the number of new Arizona COVID-19 cases each day pretty much stayed the same from the time he issued his stay-at-home directive in late March, through mid-May when he allowed it to expire. 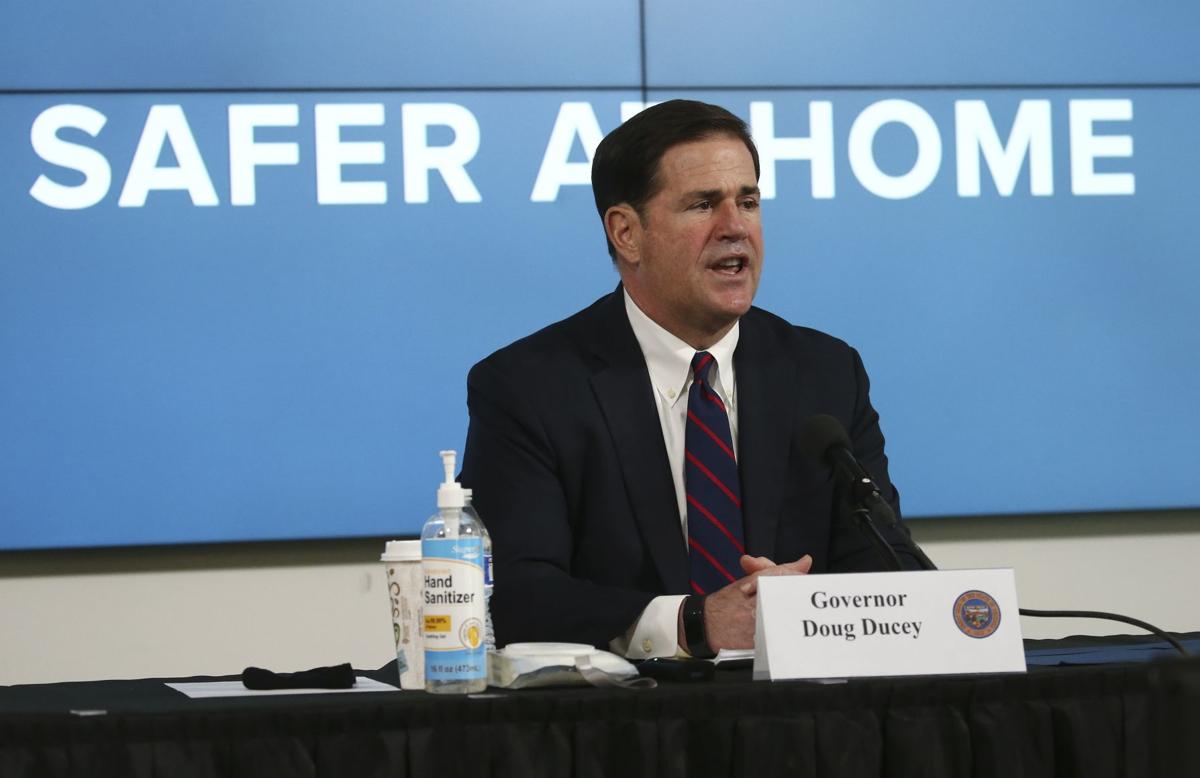 Gov. Doug Ducey disputes the idea he’s sending a mixed message in allowing restaurants to remain open for in-house dining while he is telling people to stay at home when possible.

PHOENIX — Gov. Doug Ducey declined Thursday to reimpose his stay-at-home order even after emphasizing that his own data shows how effective it was in curbing the spread of COVID-19.

Instead, as coronavirus cases have been spiking in Arizona, Ducey is putting new rules in place on how many people can sit in restaurants; and said the state will also “dramatically” increase testing.

The Republican governor also said he won’t be swayed by demands by President Trump to put students back in school seats before it’s safe.

Ducey acknowledged Thursday at a news conference that the number of new Arizona COVID-19 cases each day pretty much stayed the same from the time he issued his stay-at-home directive in late March, through mid-May when he allowed it to expire. He said the rate remained steady for about two weeks afterward, the period of incubation and the time to get test results.

But then there was an explosion of cases. “We have had a brutal June,” Ducey said, adding that he believes the state is now in its “time of maximum challenge” from the virus.

His decision to stay the course — at least as far as individual activity — comes as the state added 75 new deaths on Thursday due to the virus, bringing the total now to 2,038. There were also 4,057 new cases of COVID-19; the statewide tally since the outbreak of those affected is now 112,671. Hospitalization of patients with positive or suspected cases also continues to set records, with the figure on Thursday at 3,471. ICU bed usage was at 861, just 10 off the record set a day earlier.

Overall, the Arizona Department of Health Services reported 89% of ICU beds in use by patients of all types with 87% of in-patient beds in use.

And more than 28% of the tests for the virus reported on Thursday in Arizona came back positive.

“I always look at the different options of where we are and what the possibilities are,” Ducey said when asked about reimposing his stay-at-home order. “We want to do what would allow us to navigate out of the situation we are in right now.”

He said there’s no evidence such a move is needed right now.

Ducey said Arizona is seeing “some results” in the last 10 days since he ordered gyms, fitness centers and bars to once again close. In mid-June, he gave local officials the power to mandate the use of masks, but declined to make that a statewide requirement.

He said Thursday there is some evidence that the rate of new cases is slowing.

But Ducey said there’s also a reality that Arizonans are going to have to recognize.

“No matter what happens, we’re going to be dealing with this for some time,” he said. That, he said, makes education a better alternative than mandates, which is why his push has been his message that “you’re safer at home.”

“So the better way to do this, if possible, to have public buy-in to what is the more responsible decision, not from Mount Olympus or some government entity, but by people in a positive peer-pressure type of situation,” he said.

Still, Ducey was willing to impose some new rules on dine-in services, which he said were blessed by the Arizona Restaurant Association.

On paper, there already were some restrictions that Ducey imposed when he once again allowed in-house dining as of May 11. Those included requirements to reduce the number of tables and have at least six feet between tables unless there is a plexiglas divider.

But aides to the governor said that became difficult to police, even to the point that there was no way to know how many tables there had been before.

In this new directive, Ducey said dine-in facilities are now limited to half the number of people that fire inspectors have listed as capacity. So if the sign on the wall says that occupancy is limited to 80, that means no more than 40 diners, though the order exempts staffers from the cap.

Pima County has had a restriction of 50% indoor capacity on restaurants since May 21.

Ducey said building officials and law enforcement officers can now enforce a hard and fast number based on maximum occupancy as determined by the fire department.

That limit does not affect outdoor dining where the risk of spreading the virus is less. But the rule does remain in place for six-foot distancing between tables.

And the latest order makes clear that any area beneath a roof counts as indoor dining, even if the entire side of the restaurant is open to the outdoors.

Finally, the order also has a specific requirement on patrons, requiring them to be wearing a mask any time they are not seated at their table. It also prohibits people from standing around in groups, whether to wait for a table or for a bathroom, and encourages the use of reservations.

The governor denied that he’s sending a mixed message in allowing restaurants to remain open for in-house dining even while he is telling people to stay at home when possible.

But he doesn’t want to shutter restaurants to dine-in services the way he did before.

“What I’ve said is we want to protect lives and, to the best of our ability, protect livelihoods,” Ducey said. He said, though, that when he is in doubt “we’re going to err on the side of protecting lives.”

One thing that remains to be decided is when schools will resume — and in what form.

The governor last month said schools can begin instruction next month according to their regular schedule, but at this point only online.

He set an “aspirational” start-up date of students being back in schools of Aug. 17.

Earlier this week Trump threatened to cut federal funding for schools that refused to accede to his demand to resume in-person instruction.

At the same time, Trump criticized the guidelines put out by the Centers for Disease Control and Prevention for safely reopening schools, saying they were too tough and expensive.

Ducey said he shares the president’s goal, and he boasted of his relationship with Trump — he said he set the ringer on his cellphone to play “Hail to the Chief” when he gets a call from the White House.

“We would love to see our kids back inside a school,” Ducey said.

But that, he said, will not be according to the president’s schedule.

“It’s going to happen when it’s safe,” he said.

There were nearly 27,000 new confirmed cases in Arizona in the most recent seven-day period available, a Capitol Media Services analysis of statewide data show.

Arizona recently saw its slowest week-to-week increase in coronavirus cases in about a month.

As cases of the coronavirus continue to spike in Arizona, Pima County is stepping in to open a free testing site and ramping up contact tracing.

Across Pima County, 11,172 cases of coronavirus have now been confirmed, up 337 cases from the day before.

Officials blame the space need on a backlog in Tucson's funeral industry, not a spike in COVID-19 deaths.

“For the last two weeks, the reporting lag has grown longer and it just makes it more difficult to understand what's going on because the data aren't available soon enough. So I don't think we know where we are right now; testing has gotten so bad again in Arizona,” University of Arizona expert warns.

A total of 37% of Arizonans questioned say they strongly disapprove of how Gov. Doug Ducey is managing the COVID-19 situation, with another 26% saying they somewhat disapprove.

TUSD: Monitors, not teachers, might be in class with students when schools reopen

Many students in the Tucson Unified School District could be supervised by monitors who will be tasked with ensuring pandemic safety guidelines in in a combination teaching plan for online and in-person learning.

Judge Diane Humetewa said she was powerless to simply void Ducey's orders that closed fitness centers because of the COVID-19 pandemic.

AZ Gov. Ducey: Face masks, other pandemic-fighting efforts to last the rest of 2020

And forget about going to a bar in Arizona, at least for the foreseeable future, the governor's top aide says.

Arizonans who can't pay their rent because of COVID-19 fallout will get more time before they face eviction, Gov. Doug Ducey announced Thursday. There will, however, be some additional conditions that such renters must meet.

Arizona recently saw novel coronavirus cases plateau from one week to the next.

Arizona Gov. Doug Ducey acknowledged Thursday that the number of new Arizona COVID-19 cases each day pretty much stayed the same from the time he issued his stay-at-home directive in late March, through mid-May when he allowed it to expire.

Gov. Doug Ducey disputes the idea he’s sending a mixed message in allowing restaurants to remain open for in-house dining while he is telling people to stay at home when possible.