“The mesquite trees are wonders of their kind. … There were some whose trunks at the base scaled over four feet in diameter. The large bases branched a few feet into several limbs 15 or 18 inches in diameter,” Willard was quoted in the book, “Requiem for the Santa Cruz.”

For many decades, this mesquite bosque, covering seven square miles, was a mecca for bird lovers and scientists. From 60 to more than 70 bird species were known to have bred there at various times from the turn of the 20th century until the 1940s, and well over 100 species total lived there. The bosque helped make the Tucson area one of the ornithological capitals of the Southwest.

But the introduction of large-scale groundwater pumping in the 1920s and onward, coupled with widespread tree-cutting for firewood and power supplies, destroyed the bosque by the 1960s, said the Santa Cruz book, written by four longtime Tucson-area scientists.

Now, with perennial water flowing once again on the Santa Cruz at San Xavier Road, and small cottonwood shoots starting to reappear, will this bosque come back?

The most likely answer is that something significant and possibly exciting will return. But it’s not certain if it will be a replica of the historic bosque, several experts told the Arizona Daily Star, or how long any restoration will take.

One expert, 87-year-old riparian ecologist Roy Johnson, who studied birds there in the late 1950s, admitted, “I just don’t know. I can’t think of any other place that I’ve seen that happen to make a prediction. I don’t know of another case I could look at as a model.”

This will be a new ecosystem, and it is anyone’s guess how it will develop, said retired hydrologist Robert Webb, who with Johnson co-authored the 2014 “Requiem” book along with Julio Betancourt and Ray Turner.

Another uncertainty is that right now, “we really don’t know where the groundwater is coming from” that is supplying water to the aquifer under the river, Webb said. While the sources of the water recharging the aquifer are known, their relative contributions aren’t clear. Learning that “would require a major groundwater study,” Webb said.

The Great Mesquite Forest, as it was called, won’t return exactly as it was, said Eric Holler, a retired U.S. Bureau of Reclamation engineer involved in Santa Cruz River management issues for a quarter-century.

That’s because of a wide variety of societal changes in the Tucson area including suburbanization and industrialization, and because of several different actions at play today involving groundwater use and recharge in that area, he said.

But if the groundwater levels keep rising, Webb said, “it will be amazing. Because in the desert, just add water and Mother Nature will take care of the rest.”

The mesquite bosque itself lay just east of what’s now considered the San Xavier area of the Tohono O’Odham reservation. It was sandwiched between the saguaro-packed Martinez Hill east of the river and Black Mountain to the river’s west.

It got early, major notices from Western explorers, travelers and military officials in the middle of the 19th century.

In 1846 during the Mexican War, U.S. Army Lt. Col. Philip St. George Cooke found the mesquite grove near San Xavier so thick that he feared it would provide enemy troops cover for an ambush, wrote Tucson archaeologist Deni Seymour in an unpublished paper on the river’s environmental history.

John Russell Bartlett, an artist, historian and U.S.-Mexican boundary commissioner, rested at the forest in the 1850s and called this area of the Santa Cruz valley “the most picturesque and beautiful we had seen,” says the “Requiem” book.

For the San Xavier people living near the river, the mesquite bosque, along with canopies of cottonwood, willow, hackberry and walnut trees, provided shade, resources and a sense of place, Seymour’s paper said.

By the early 1900s, what was then called the Great Mesquite Forest had become one of the Southwest’s best studied places for birds, the “Requiem” book said. By 1936, aerial photos showed it extended 6.75 linear miles.

In 1917, scientist William Dawson led a party of five scientists into the bosque and reported, “the humble mesquite … rises here to the dignity of a real tree, matchless for size and extent, (and) contained trees sixty and seventy feet in height and up to three feet in diameter,” the “Requiem” book says.

Ornithologist A.C. Bent came there a few years later and reported, “the forest was rich in bird life and the air was filled with their music.”

I-19 construction was death knell

The forest started to decline in the 1930s and ‘40s, first from woodcutting that knocked over some trees towering more than 65 feet high, the book said. The trees grew back but at 15 to 20 feet tall.

Groundwater pumping then lowered the water table under the bosque, by nearly 30 feet from 1930 to 1940 alone, the book said.

Yet by 1958, when ecologist Johnson spent the first of three years in the forest as a University of Arizona zoology graduate student, the forest still teemed with birds, even with the bosque spanning one-third of its original size.

Water was gone from the river but the water table remained high enough to support mesquites with roots 60 feet underground.

Johnson was a master’s degree student working under Professor Joe Marshall, a co-author of the pioneering “Birds of Arizona” book and a student of the forest himself back in the 1930s.

“It was very thick, when you got in there, you could hardly see more than 50 feet. It was the biggest place for birds I think I’ve ever seen —certainly in the U.S. and maybe some places in the tropics,” Johnson said.

And, “you had insects galore in the forest” providing bird food, he said.

The death knell for the forest came first when the state built Interstate 19 through the area in the early 1960s, drawing more people and industry, he said.

“I don’t know, with the city of Tucson growing like it did, it couldn’t be helped,” Johnson recalled. “It was, so to speak, progress.”

Today, even with cottonwood shoots, cattails and sunflower plants back in the river, it will take “decades” of sustained recharge of the aquifer to re-elevate the water table to levels that sustained the entire mesquite bosque, said Julie Stromberg. She is a retired Arizona State University life sciences professor and riparian ecologist.

While the water table is even with the river in spots, it’s still up to 100 or more feet deep away from the banks where the bosque once stood.

The riparian vegetation is extending itself up and down river, but not yet laterally alongside it, she said, noting that the mesquite forest back in 1951 was five miles wide.

“This is not to say that we shouldn’t try! Better now than later or never!” Stromberg added in an email to the Star.

Hydrologist Webb said, “We will not restore the Great Mesquite Forest. What we’ll get is something new and different and quite possibly very exciting.”

One reason that the forest won’t become a replica of its past glory is that today, the river is both wider and deeper than it used to be, restraining potential future plant growth, he said.

“Second, the climate is different now, warmer and in some years at least drier,” he said.

Former reclamation official Holler is more optimistic. Today, he notes, the aquifer in and around San Xavier is being replenished due to reduced pumping and more Central Arizona Project water use to the river’s west, east and south.

Over the long term, water levels will rise to uniform levels and reach equilibrium compared to what’s being pumped out, he said.

River restoration work could help, along with the building of flood control structures, he said.

Eventually, he said, “we can expect a lush and abundant mix of mesquite, cottonwood and willow vegetation.”

30 historic photos of the Santa Cruz River through Tucson

If you miss the lush green look in your Tucson yard, check out these trees and shrubs!

Local Opinion: As Tucson-area rivers are reborn, we can do even more to help them flow

Rising groundwater levels have allowed the river to resurface, with a half-mile stretch flowing now for one year.

The river once again runs dry through most of downtown Tucson. The cutback may last a few months.

The lawsuit by the Tohono O'odham and Pascua Yaqui says the Environmental Protection Agency and the Army Corps of Engineers, at the direction of President Trump, repealed Obama-era regulations defining the scope of Clean Water Act protections. 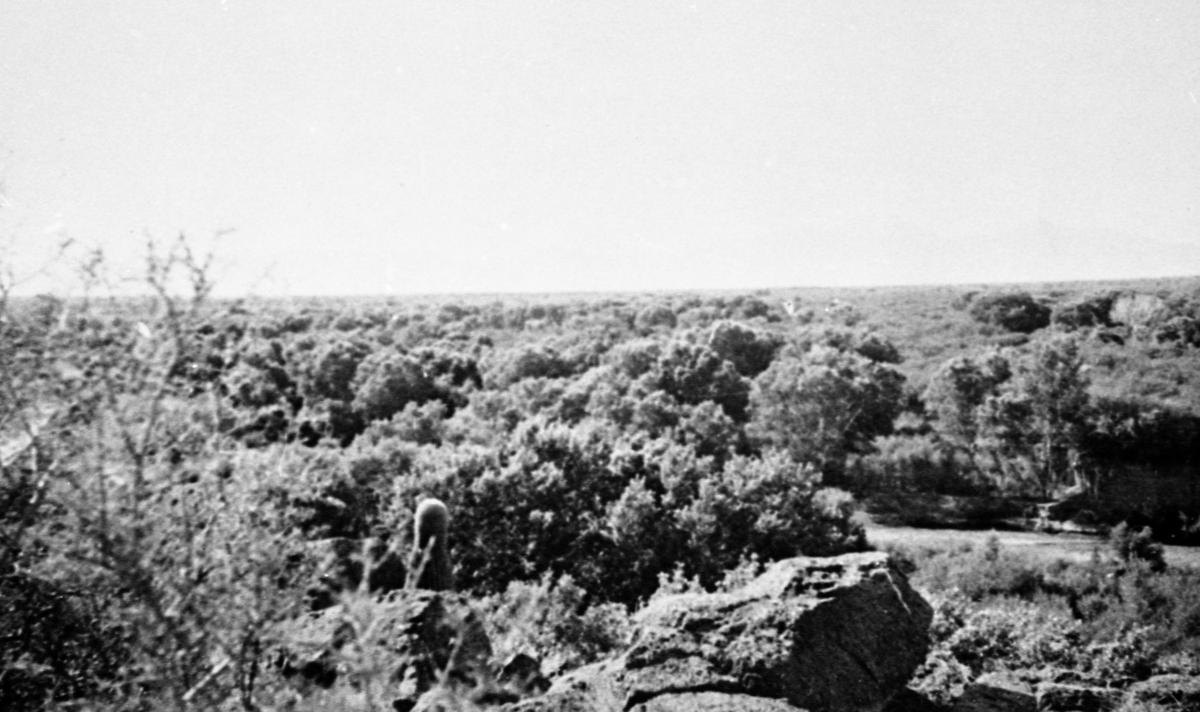 This 1942 photo shows a mesquite forest along the Santa Cruz River south of Tucson, looking south from about three-quarters of a mile east of Mission San Xavier del Bac. 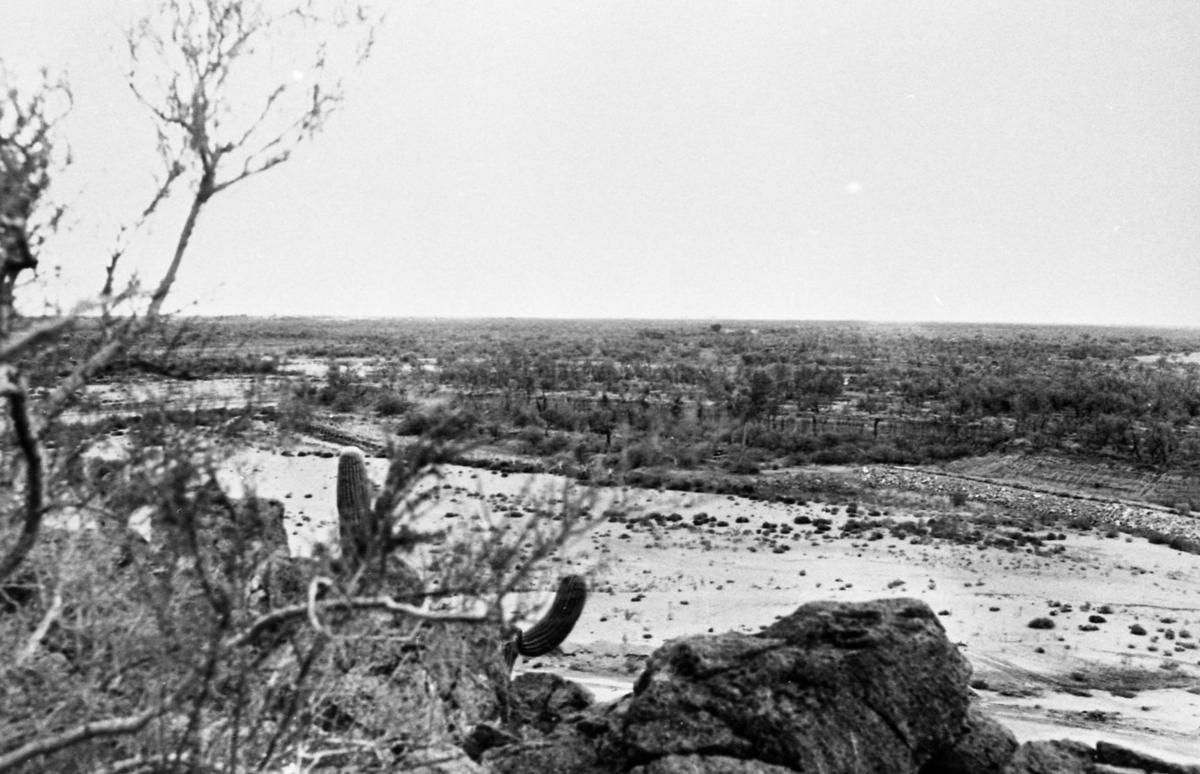 In this 1978 photo looking south on the Santa Cruz River from about three-quarters of mile east of Mission San Xavier del Bac, the mesquite forest is nearly gone. 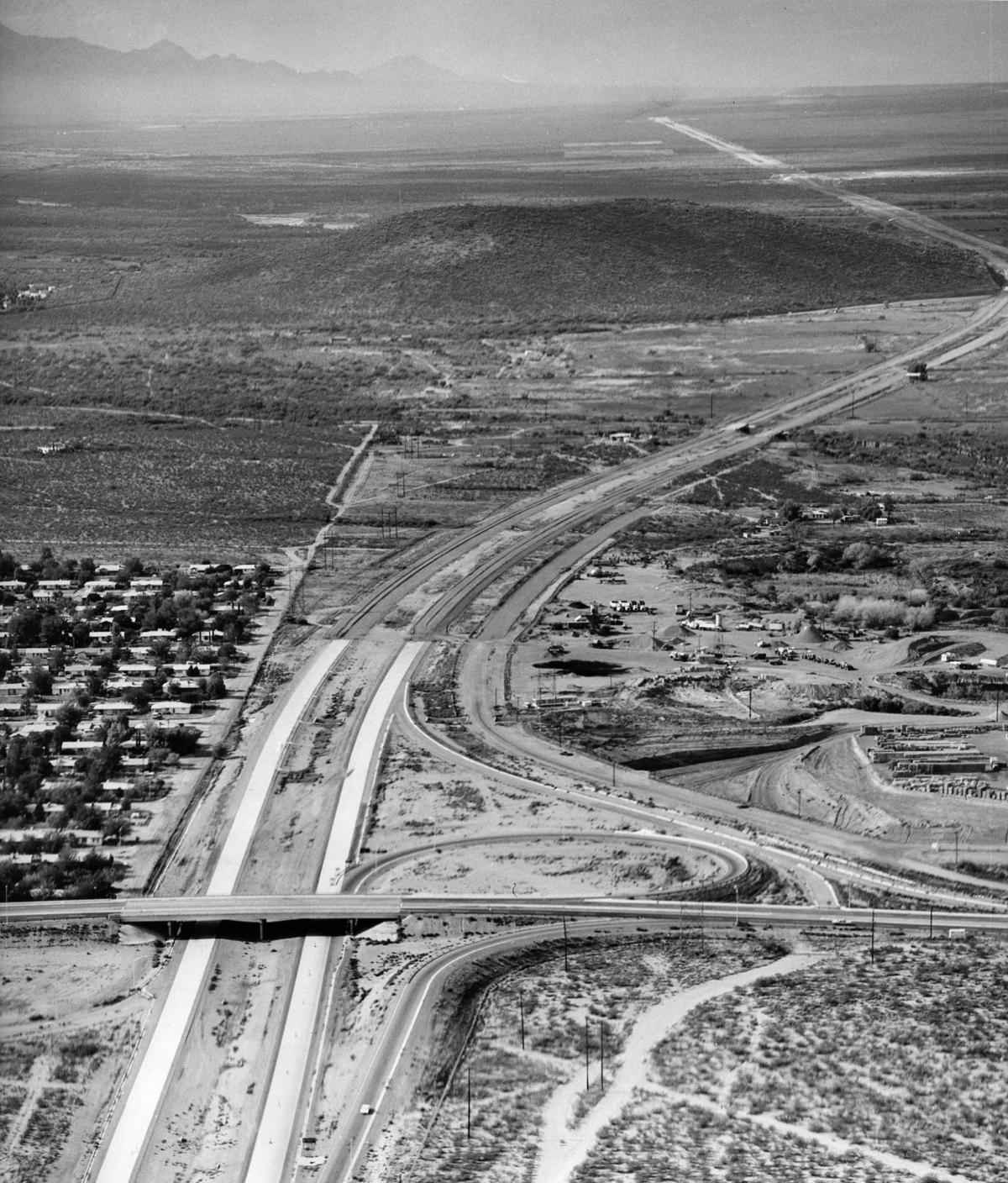 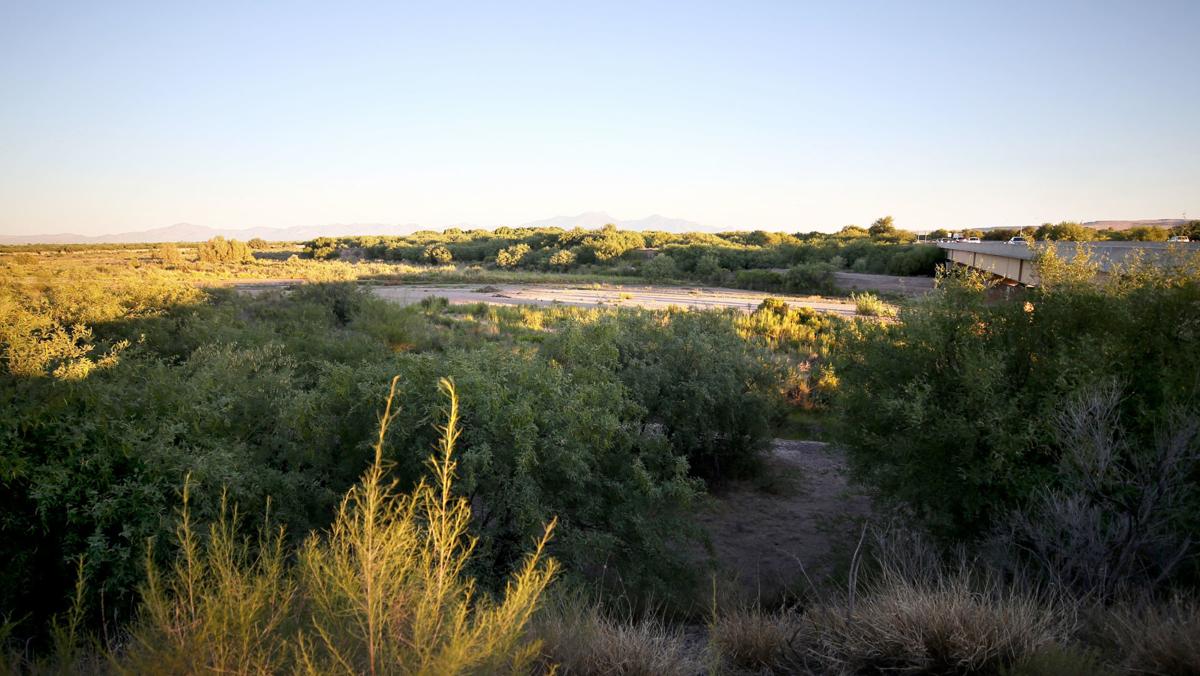 Looking south over the Santa Cruz River from I-19 just south of San Xavier Road on June 18 this year. With water flowing once again, small cottonwoods are starting to appear.