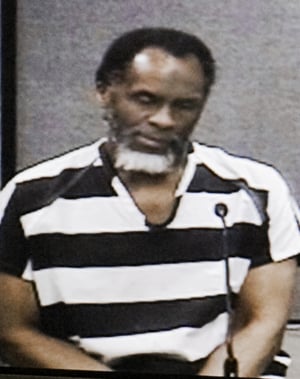 Longtime fugitive Glen Francis, a suspect in the assassination of Tucson imam Rashad Khalifa, during his video arraignment on Friday, June 24, 2011 in Tucson, Arizona. 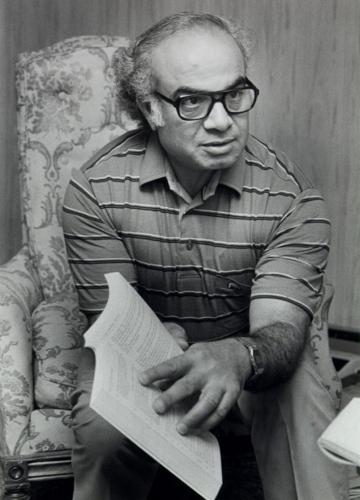 This is a 1989 Arizona Daily Star photo of Rashad Khalifa, 54, who had received death threats because he believed most of the Islamic world was following a satanic version of the Koran.  He was slain in 1990.

More than 21 years after controversial teacher Rashad Khalifa was brutally slain in his mosque, the man accused of committing the crime is sitting in the Pima County jail.

Rashad Khalifa, 54, was stabbed and slashed about 30 times in the kitchen of his East Sixth Street mosque on Jan. 31, 1990, according to court documents.

He had received several written and verbal threats before his death because of the way he translated the Koran, removed two verses and claimed to be a messenger of God, court documents stated.

Four years later, an arrest warrant was issued for Francis, 54, in connection with the slaying, but he wasn’t arrested until April 2009.

Canadian officials found Francis living under an assumed name, and it took two years for the extradition process to be completed.

Francis is scheduled to be arraigned in Pima County Superior Court on July 5.

Francis was born in Trinidad and moved to Canada in 1976, according to court documents. He was living under a false name and driving a cab in Dallas before arriving in Tucson in 1989.

Once in Tucson, Francis obtained an Arizona identification card in the name of Benjamin Phillips. In early January 1990, he went to the mosque, saying he wanted to know about Islam.

He was last seen with Khalifa the day before the slaying, court documents indicate.

Dallas FBI agents contacted Francis in 1994, who was then living under the name of Joseph Quay Wall, according to court documents.

Agents asked him about Khalifa’s death and his association with the terrorist group Fuqra. Francis said Fuqra was not a group, but that he did follow the Fuqra way of life. He denied involvement in Khalifa’s death but said if Khalifa had proven parts of the Koran wrong, that, as a Muslim, he deserved what he got, court documents indicate.

Francis provided agents his fingerprints and hair, but when they went back to speak with him the next day, he was gone.

Khalifa’s family members and Deputy Pima County Attorney William McCollum asked for the $1 million bail because of the nature of the crime, Francis’ use of at least seven aliases and the time it’s taken to get him back to the United States.

Sam Khalifa told Pollard he didn’t want there to be even the “slightest chance” for Francis to get out and expressed fear about potential bail sources.

Assistant Pima County Public Defender Steve Sonenberg noted Francis has no prior convictions and bail is not a punishment, but rather a means to make sure someone attends his or her court hearings. He conceded, however, that Francis has no ties to Tucson.

Sam Khalifa, a Sahuaro High School grad and former pro baseball player, and his mother would not comment after the hearing.

In the early 1990s, two Fuqra members were convicted in Colorado on conspiracy and other charges related to the slaying.

Colorado Springs police uncovered the plot to kill Rashad Khalifa in 1989 when they searched a storage locker in a burglary investigation, according to Arizona Daily Star archives.

Authorities found 40 pounds of explosives, notes that detailed when worshippers arrived and left Khalifa’s mosque, and when police patrolled the area. Police  seized photos of the mosque and Khalifa’s followers. They found notes stating the conspirators hoped to stab Khalifa but also considered strangulation, poison and shooting Khalifa with a silenced .22-caliber gun.

Authorities said the notes indicated that any worshippers entering the mosque would be herded into a room and killed. Khalifa was aware of the plot before his death, Colorado officials said.

Longtime fugitive Glen Francis, a suspect in the assassination of Tucson imam Rashad Khalifa, during his video arraignment on Friday, June 24, 2011 in Tucson, Arizona.

This is a 1989 Arizona Daily Star photo of Rashad Khalifa, 54, who had received death threats because he believed most of the Islamic world was following a satanic version of the Koran.  He was slain in 1990.