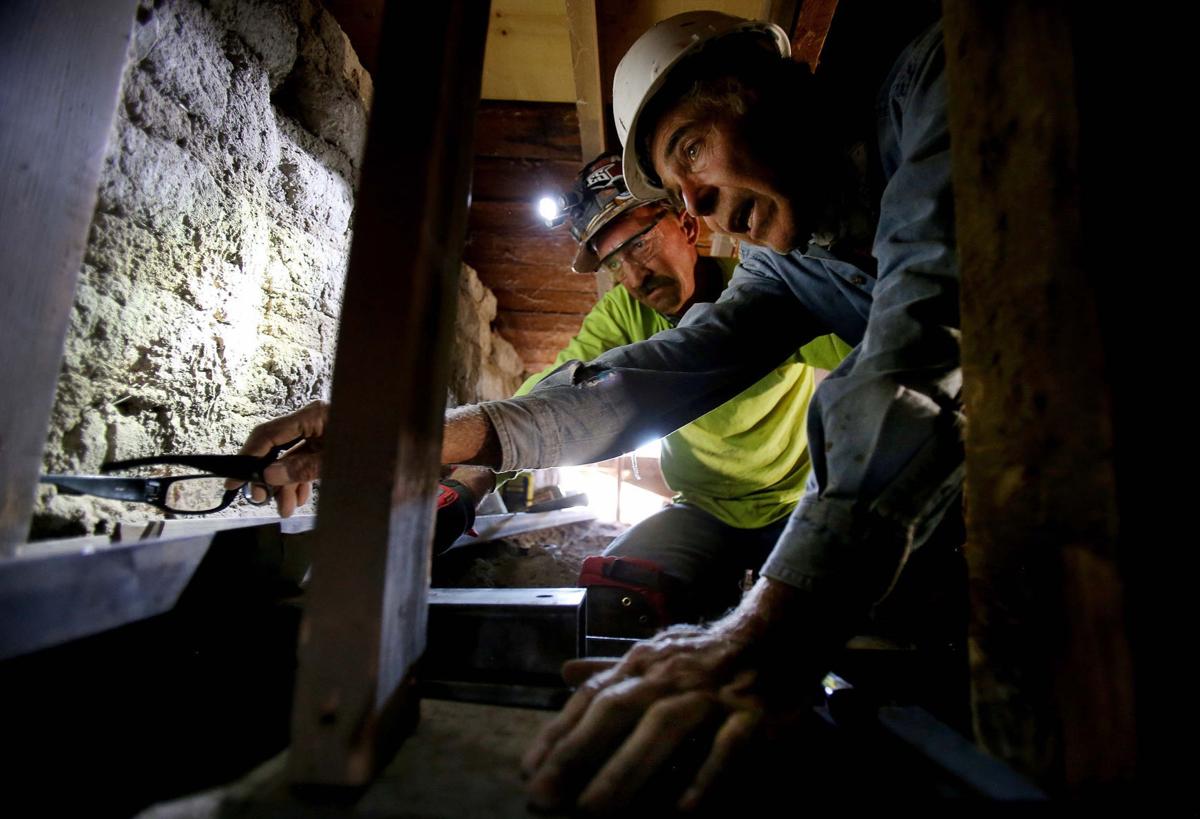 Eric Means, right, and Derrick Hack troubleshoot an issue while installing a steel bond beam in the gabled crawlspace above the original ranch house ceiling at the historic Empire Ranch near Sonoita. 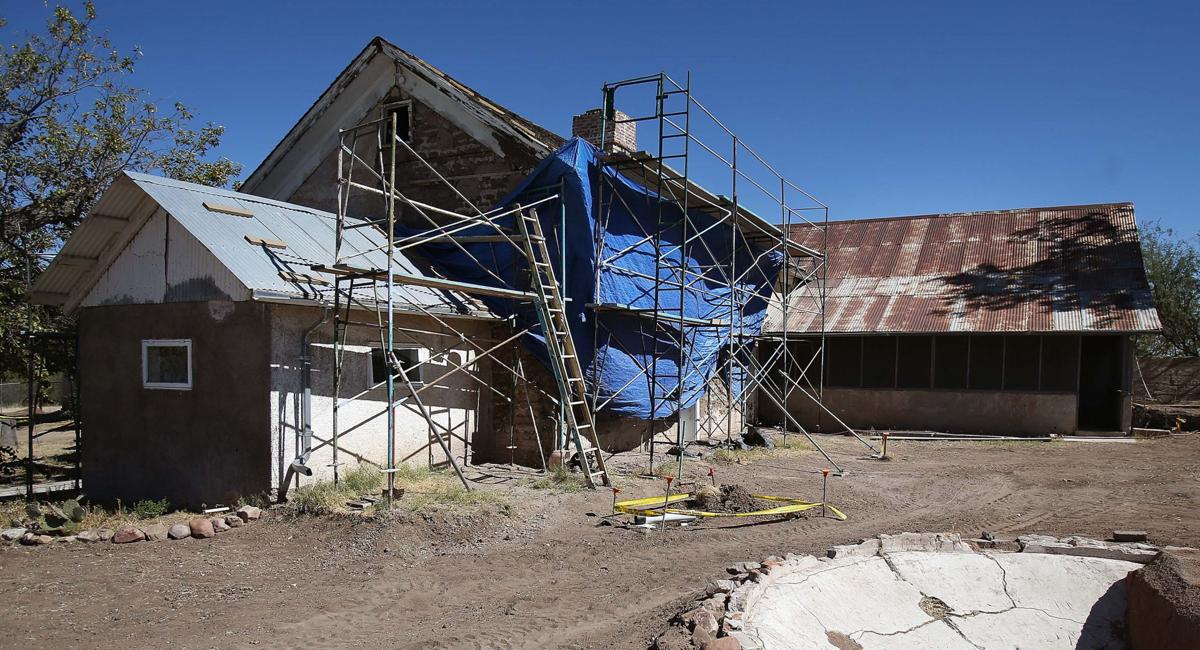 Scaffolding surrounds the historic Empire Ranch just east of Arizona 83. Means Design and Building has been subcontracted to help in the seismic stabilization process. 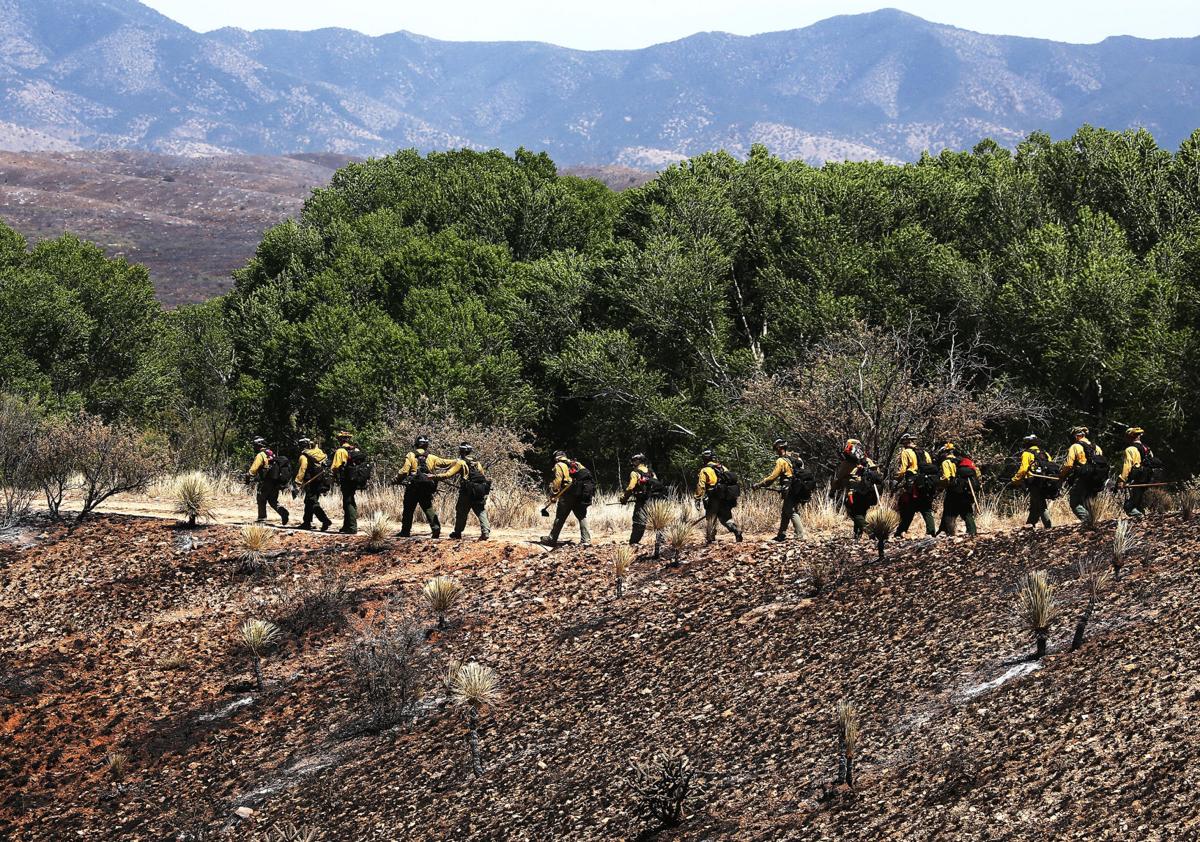 The Wolf Mountain Hotshots pack in to mop up areas along Cienega Creek east of Empire Ranch while the Sawmill Fire burns in southeastern Arizona in April. 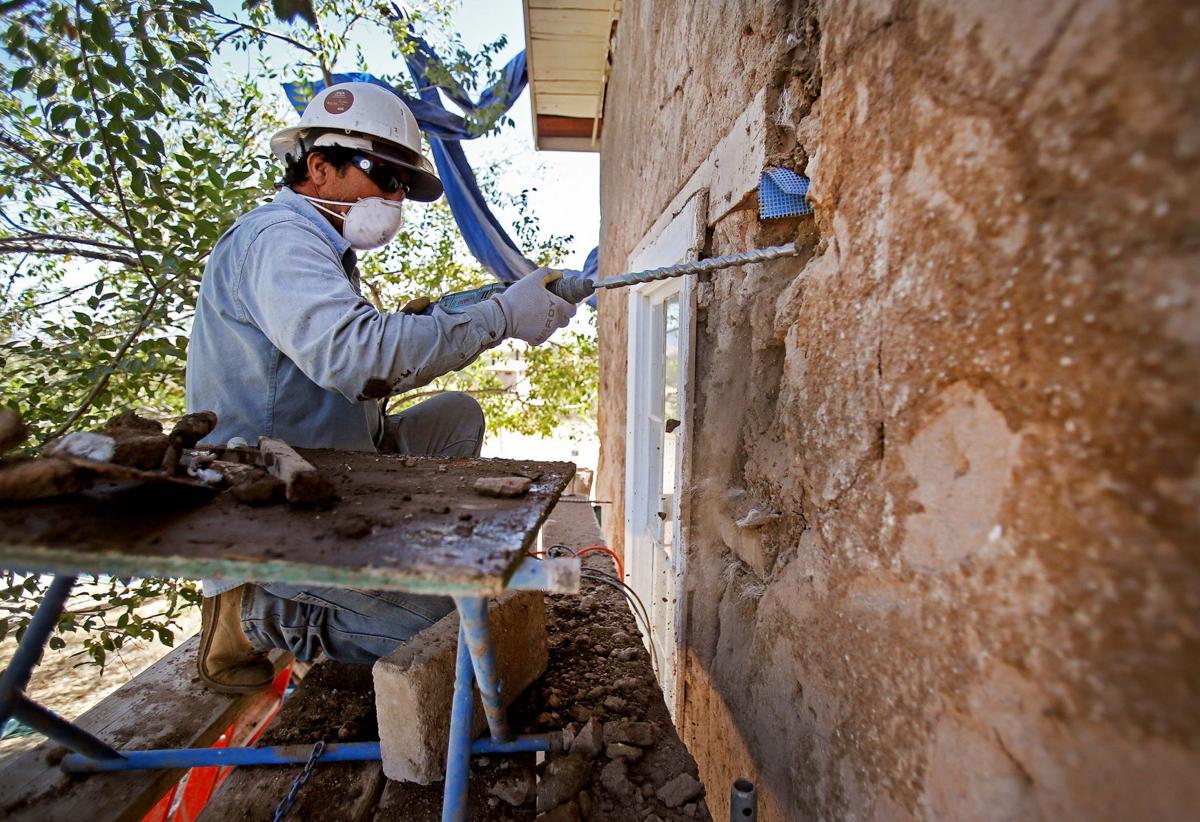 Nate Lespron drills out damaged adobe near a window lintel at the Empire Ranch near Sonoita. 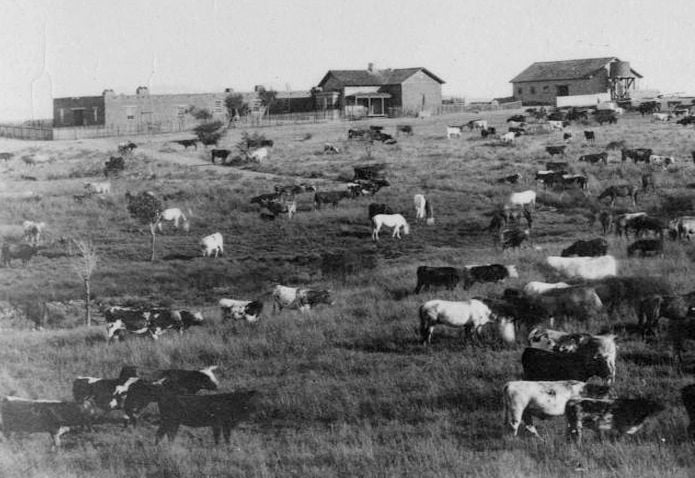 The headquarters of the historic Empire Ranch north of Sonoita narrowly escaped destruction in the raging Sawmill Fire in April. It was a blazing close call every bit as dramatic as scenes in the many Western movies and TV shows filmed at the ranch over the years.

A celebration of that fortunate outcome — as well as ongoing work to stabilize the main ranch house — will be featured at a public roundup and open house event at the ranch on Saturday, Nov. 4.

“The Sawmill Fire came right up to the structures at the Empire Ranch headquarters, but thanks to the skilled firefighters and dedicated Bureau of Land Management staff, no structures were lost,” said Lahsha Brown, spokeswoman for the Empire Ranch Foundation. The ranch is part of the 46,000-acre Las Cienegas National Conservation Area, which is managed by the BLM.

“We’re doing a couple of things at the roundup and open house to celebrate” the firefighting work that saved the ranch, Brown said.

“There will be a big banner that says ‘Thank you firefighters,’ and we’re inviting firefighting crews involved in the Sawmill Fire to come as our guests as a token of appreciation.”

Chris Schrager, an archaeologist and historic preservation specialist with the BLM, described how close the fire came to some ranch buildings — and how it was stopped.

“The fire burned within 50 feet of some structures on the ranch,” Schrager said.

“It was stopped by back burns and other interventions by five engine crews that were stationed at the ranch during the fire.”

June Lowery, a public affairs officer with the BLM, noted that workers from the BLM and Empire Ranch Foundation helped protect the ranch by keeping grass at the site closely trimmed before the fire started.

Although ranch buildings escaped the flames, 45 cottonwood trees in nearby Empire Gulch were lost, Lowery said.

Empire’s historic ranch house — one of about a dozen buildings and other structures, including a windmill, at the site — is undergoing stabilization work. A presentation about the work on the building, which dates to the 1870s and is on the National Register of Historic Places, will be featured at the roundup event.

“The construction fence around the ranch house had gone up a few weeks prior to the Sawmill Fire,” Schrager said. “The house wasn’t damaged by the fire. The work is to make the building structurally sound and safe for public visitation.

“The ranch house will be open to the public again sometime next year,” he said.

Presentations will focus on topics ranging from “Arizona Cattlewoman” and “My Working Cowboy Life on the Empire — 1940s” to “Movies in and Around the Empire.”

Brown, of the Empire Ranch Foundation, noted nearly three dozen movies and television shows that were filmed on or near the cattle ranch. Among them: “Red River,” “The Cowboys,” “The Big Country,” “The Outlaw Josie Wales,” “Hombre,” “A Star is Born,” “Gunsmoke” and “The Young Riders.”

Western skills demonstrations at the roundup will include blacksmithing, adobe brick making, leather working and other skills.

Arena presentations will include a cavalry riding demonstration and cattle handling.

A music stage will feature live performances, and food and soft drinks will be available for purchase.

• Where: The ranch is about 40 miles southeast of Tucson. Drive east on Interstate 10 and take Exit 281 onto Arizona 83. Continue south 18 miles to just past mile marker 40 and turn left at the ranch sign.

• Cost: Events are free, but organizers request a $10-per-vehicle donation. Barbecue and other foods will be for sale.

The Empire Ranch was established in the 1860s as a homestead property of 160 acres. It was purchased by Walter Vail in 1876 and expanded to mo…

Don't miss this: Autumn is showing its colors in Tucson's Catalina Mountains

Here are some places for an up-close look at autumn color.

The application period is Nov. 1 through Nov. 9.

Arizona Wildcats are bowl eligible – and relevant again – after upsetting No. 15 Washington State

Khalil Tate accounts for three touchdowns and J.J. Taylor rushes for two as the Cats defeat the Cougars 58-37

Postgame report: Khalil Tate shines as Wildcats get redemption against No. 15 Washington State

Seen and heard at Arizona Stadium: On homecoming, TDs galore, and Wazzu's Hercules

Private videos she made for a boyfriend were shared by several officers in the department.

Tucson firefighters put out blaze at vacant house on southwest side

Cause of fire is under investigation, authorities say.

Agent said accidentally starting fire was "one of the worst days of my life."

Border Agent Dennis Dickey shot a target that contained Tannerite, an explosive substance designed to detonate when shot by a high-velocity firearm, igniting a wildfire that eventally burned 47,000 acres.

Eric Means, right, and Derrick Hack troubleshoot an issue while installing a steel bond beam in the gabled crawlspace above the original ranch house ceiling at the historic Empire Ranch near Sonoita.

Scaffolding surrounds the historic Empire Ranch just east of Arizona 83. Means Design and Building has been subcontracted to help in the seismic stabilization process.

The Wolf Mountain Hotshots pack in to mop up areas along Cienega Creek east of Empire Ranch while the Sawmill Fire burns in southeastern Arizona in April.

Nate Lespron drills out damaged adobe near a window lintel at the Empire Ranch near Sonoita.