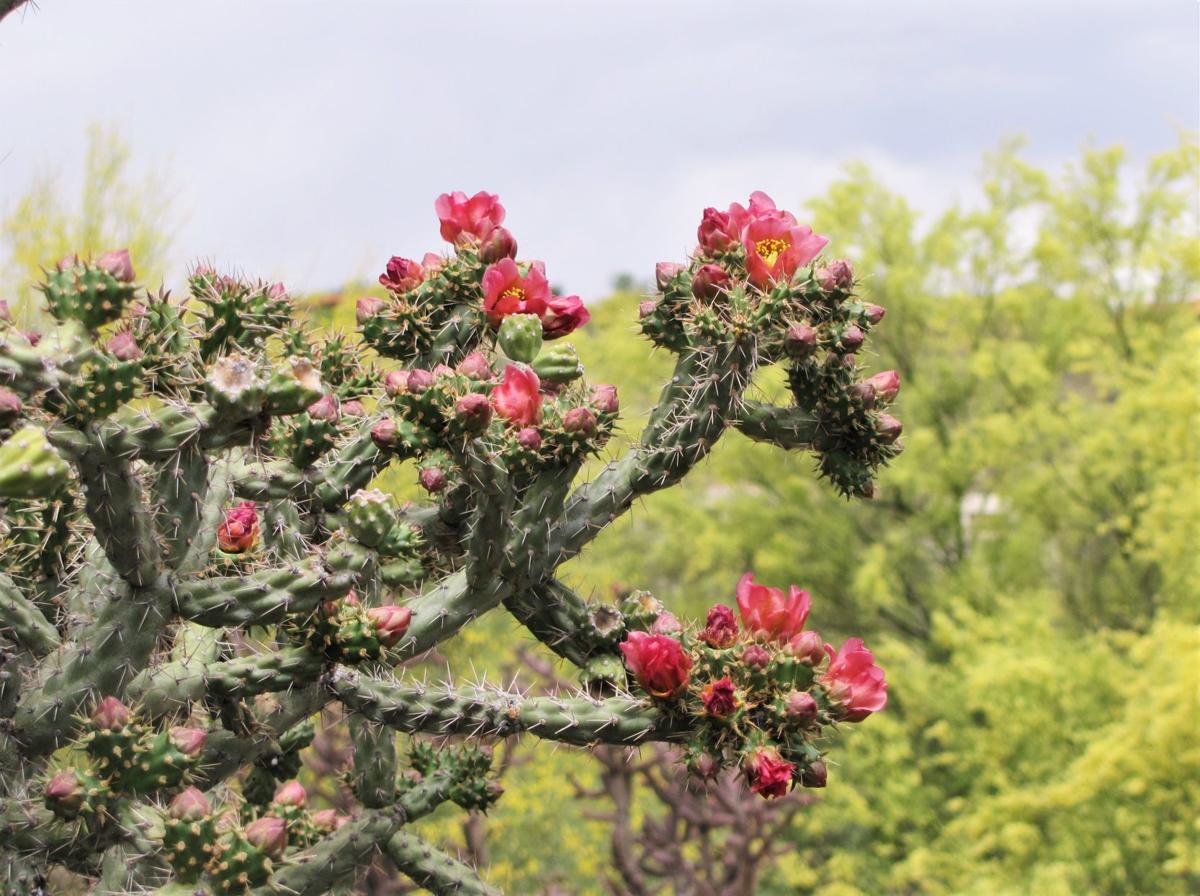 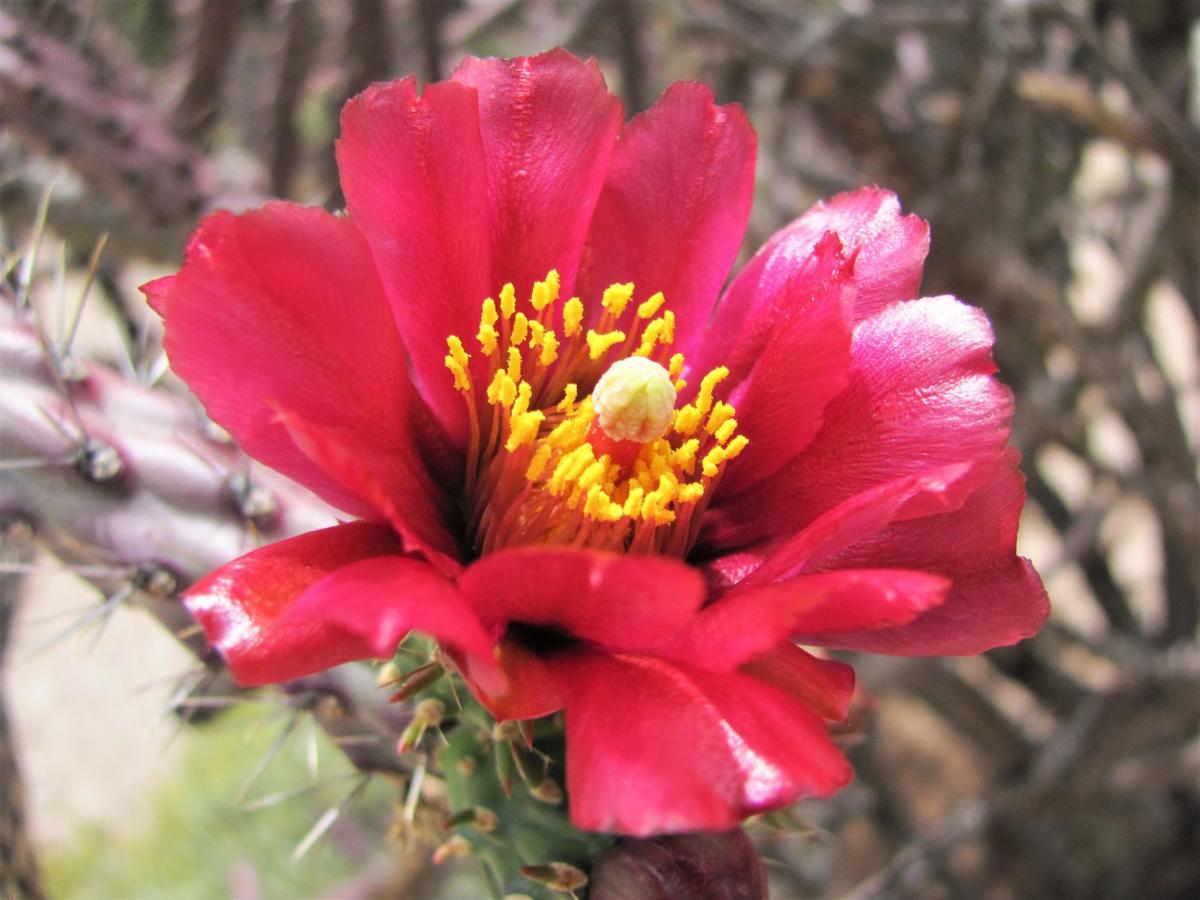 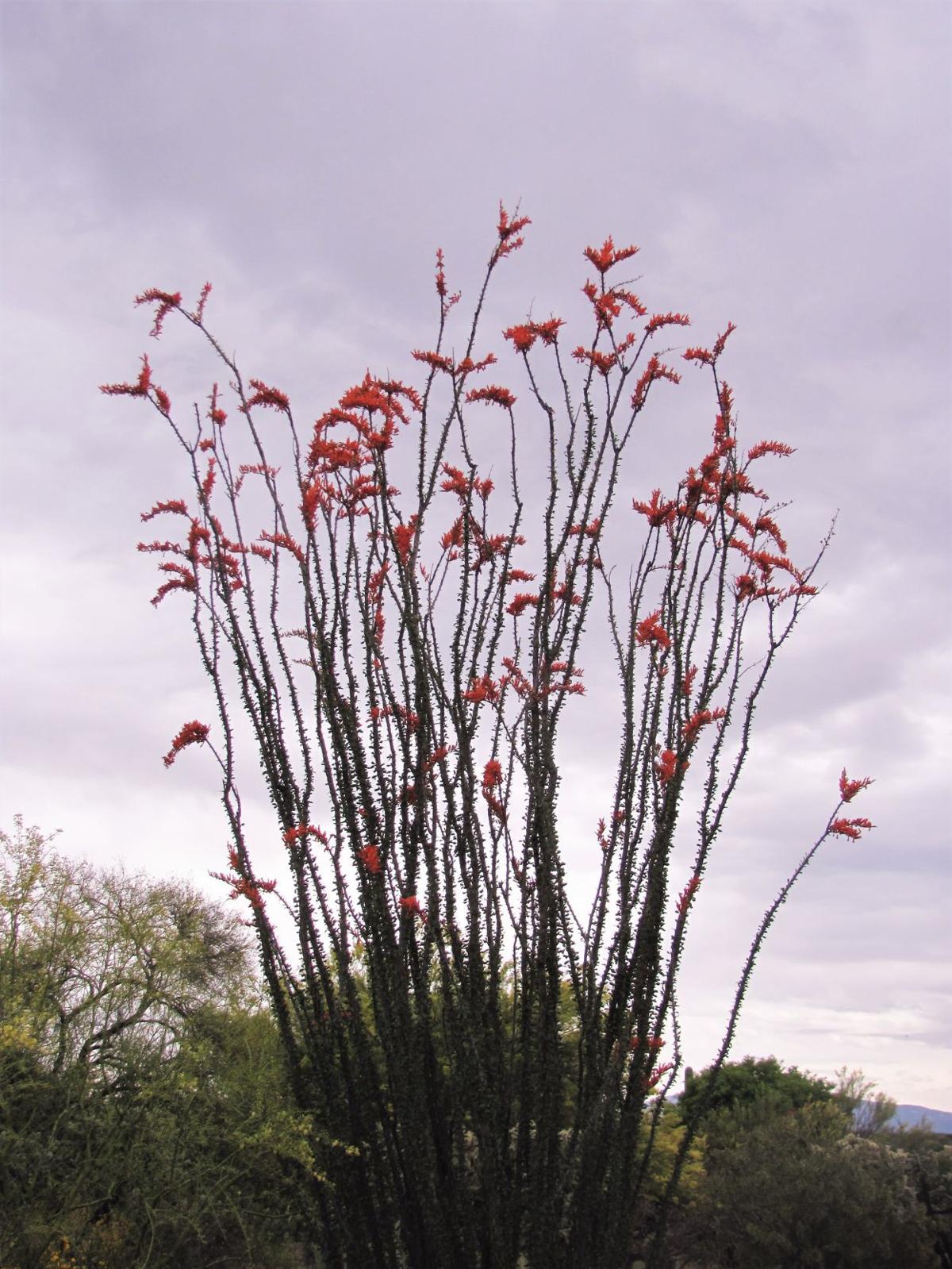 An ocotillo shows off its dense clusters of red tubular flowers. 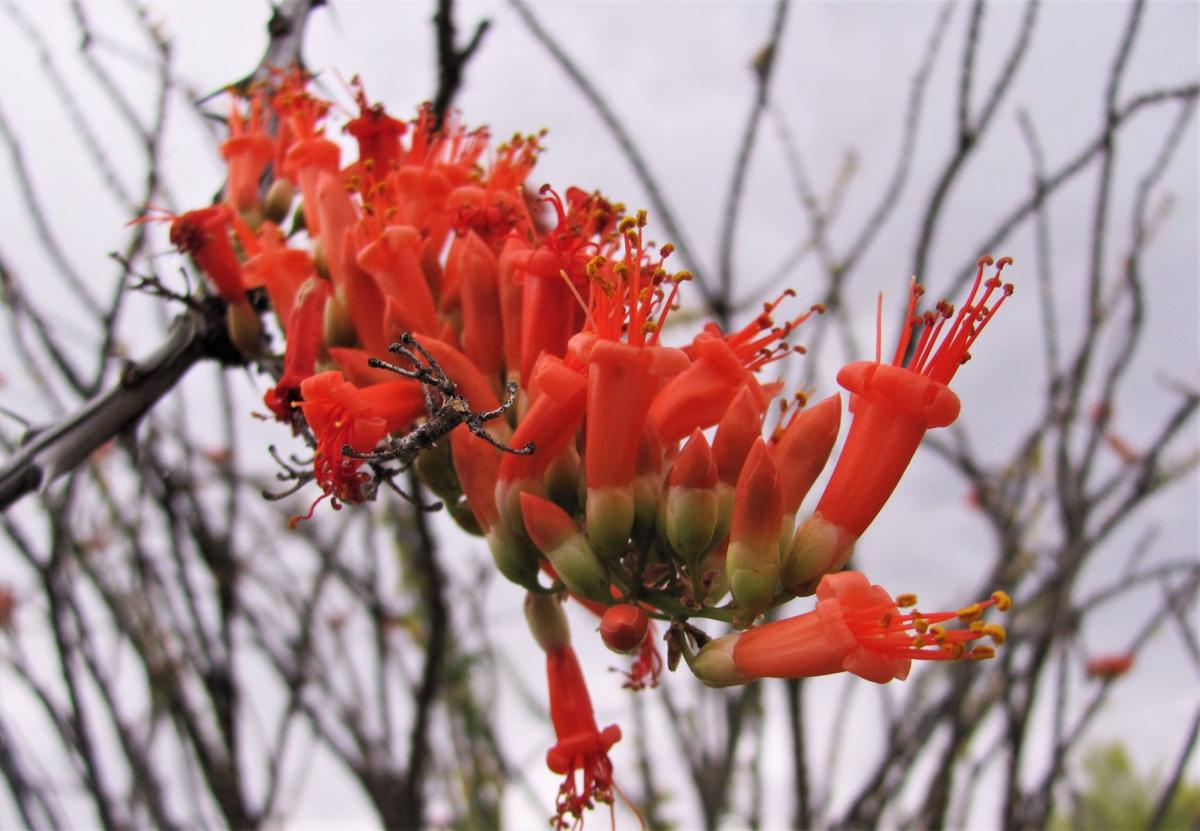 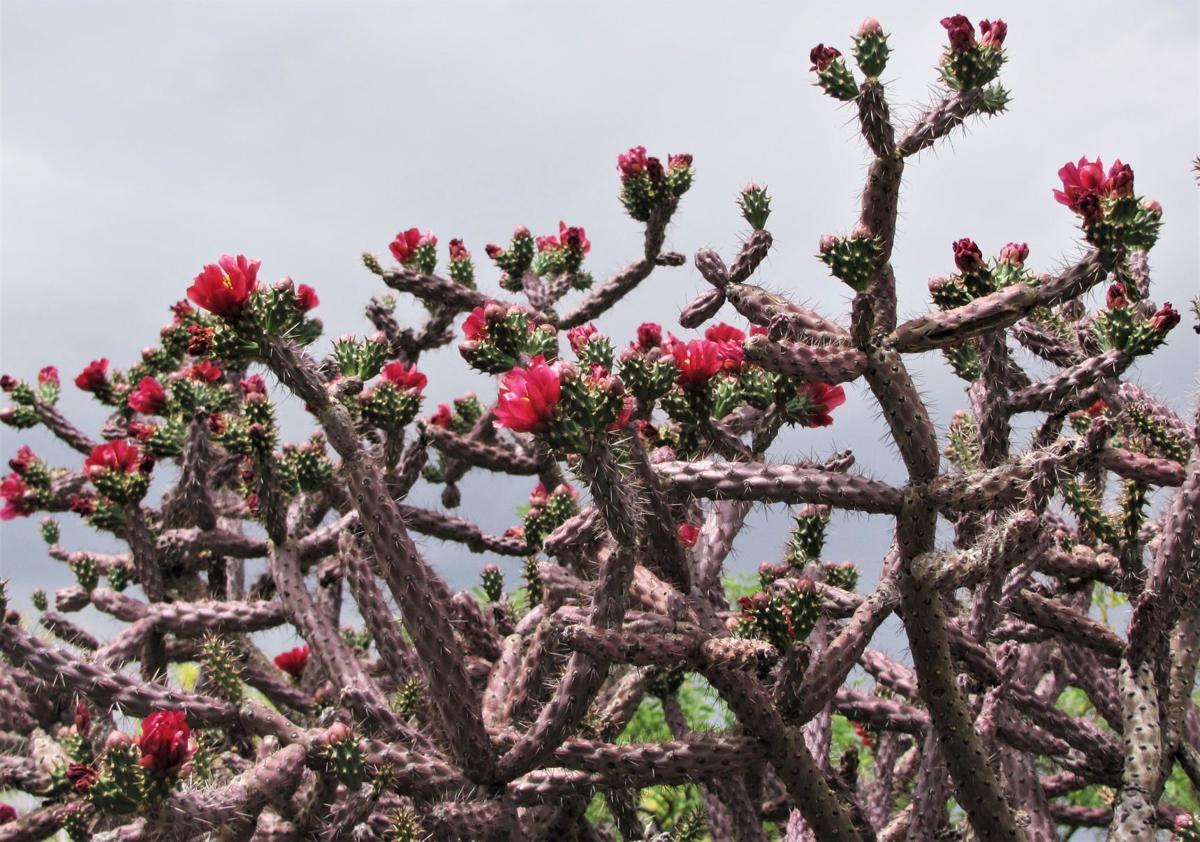 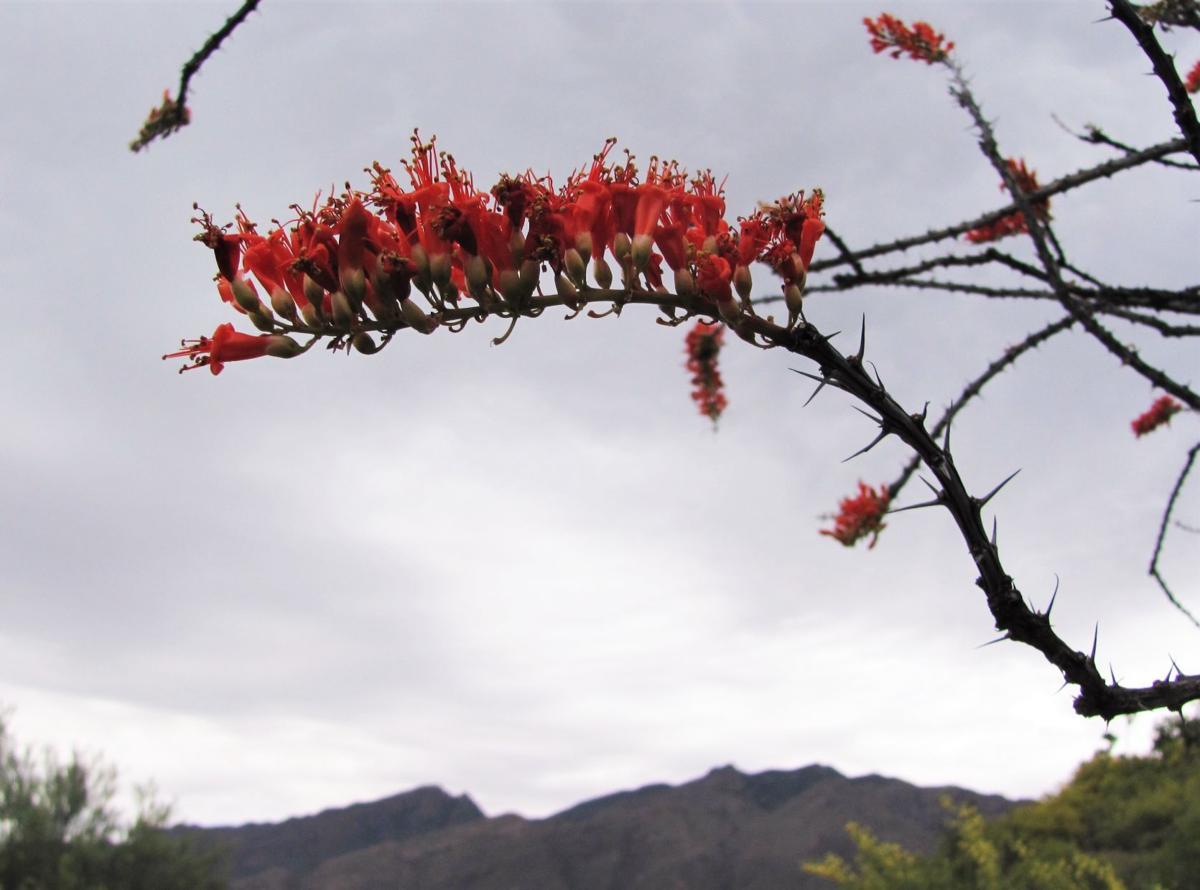 An ocotillo bloom with the Catalina Mountains in the background. — Credit: Doug Kreutz/Arizona Daily Star

Our ever-evolving palette of spring color has arrived at a new hue: red.

As the season of yellow continues on some hillsides and neighborhoods cloaked with palo verde color, several kinds of cactus flowers and ocotillo blooms are adding dazzling red highlights to the show.

Cholla cacti are among those that sometimes sport bright red blooms. You’ll find them in places like Saguaro National Park and Tucson Mountain Park but also along roads in the Catalina Foothills and in back yards with desert vegetation.

Various species, from staghorn cholla to cane cholla, can produce red flowers as well as blooms in other hues.

The staghorn is one of the most striking chollas in Southern Arizona. It stands out not only for its colorful blooms at this time of year but also for its size. It stands much taller than some other chollas — looking almost as much like a densely branched tree as a cactus.

Cactus guidebooks, available in libraries and bookstores, can be a valuable resource if you are a person who wants to know the names of red-blooming species spotted along a desert trail.

Many people assume that the prickly ocotillo plant — sporting bright red blooms at this time of year — is a type of cactus. But it’s not.

A plant fact sheet prepared by the Arizona-Sonora Desert Museum describes it this way:

“Ocotillos are one of the easiest plants to identify in the desert. They are a large shrub with long cane-like unbranched spiny stems that grow from a short trunk. Small 2-inch leaves will grow from the stems when there is enough moisture. Dense clusters of red tubular flowers grow from the end of the stems from March through June.”

Other facts about ocotillos:

A drive in the scenic Rincon Valley leads to big vistas

Take a scenic drive, and possibly a hike, in the Rincon Valley.

Cacti are in bloom

Tucson weather: Sunny with some clouds

It's the first of May, and you know what that means: a summary of April climate stats!

Tucson travelers may have been exposed to measles at airport

Pima County health officials have issued a warning that a person with measles traveled to Tucson in the end of April and may have exposed the public to the disease.

UA scientists: Speck of stardust could hold clues about our solar system

Stardust implies magic, but it's also real stuff from a long-gone star.

Due to the wet winter, Tucson is seeing a boom of false chinch bugs

Increases will take effect in late summer or fall.

Liner will be installed in main pond to help prevent water loss.

Madera Canyon is a mecca for birdwatchers — for good reason

An ocotillo shows off its dense clusters of red tubular flowers.

An ocotillo bloom with the Catalina Mountains in the background. — Credit: Doug Kreutz/Arizona Daily Star