Some local veteran groups are against changes meant to expand their medical care options. They say it will funnel money into private facilities and out of Veteran Affairs medical centers where they receive specialized care.

Bob Phillips, a Vietnam Marine combat veteran, was having shoulder pain in early 2018 that caused him weeks of sleepless nights. He says he needed an MRI but couldn’t get an appointment at the VA in Tucson for four months. He says a clerk at the VA told him there were two MRI machines, but one was broken.

Wanting to get help as soon as possible, Phillips had the VA make an appointment for the MRI at a Tucson hospital. He said he felt shuffled through the procedure at the hospital without the care or compassion he was used to at the VA.

“It was a terrible experience,” Phillips said. “They couldn’t have cared less about me.”

The Mission Act, which passed with bipartisan support in 2018 and went into effect last month, expands options veterans have to seek care outside of the VA. The new law allows veterans to use private facilities and medical providers if they fit any one of several criteria, including living more than a 30-minute drive from their primary-care provider or having to wait more than 20 days for an appointment.

Opponents of the law say it expands the privatization that began with the Veterans Access, Choice and Accountability Act of 2014 — which allowed veterans to see a private doctor if they lived 40 miles from a VA provider or had to wait 30 days for an appointment — and that instead of moving resources into the private sector, the government should just better fund the VA.

Phillips is a member of the national nonprofit Veterans for Peace, which is against the VA changes. Joining protests across the country, a number of the organization’s members gathered across from the Tucson VA on East Ajo Way, near South Sixth Avenue, with labor activists and members of federal worker unions in early June, the day before the Mission Act officially went into effect.

They worry the Mission Act’s expansion of private-care will exacerbate inadequate maintenance and upgrades, as well as staffing vacancies, leading to inadequate care.

“They’re not only not replacing human beings, they’re not replacing machinery,” Phillips said. “They’re not performing maintenance that needs to be done, which forces people to go out (of the VA) because there’s no way to get to them inside the system.”

Opponents of the law also worry about worsening continuity of care, inferior relationships with medical providers in the private-sector, care that’s not specialized to veterans, higher costs and veterans who work at the VA losing their jobs — all leading to a lower level of care.

During an inpatient stay at the VA in Tucson in the fall of 2016, Alice Ritter, who served 22 years in the Air Force, asked one of her night nurses why it took so long to answer the call lights. The nurse told her it was because the center was understaffed.

Ritter also had an emergency inpatient stay at a private hospital in Massachusetts a year later while on a trip. She was pleased with the care she got there but says the staff at the VA better understands the issues veterans deal with. About 30 percent of VA employees are veterans themselves and can often better understand veterans’ needs, whether physical, mental or emotional.

“We have to fully staff, fund and fix the VA and all the problems that we have to deal with,” Ritter said. “There’s nothing like the VA, for me, a veteran.”

Staffing vacancies at the VA are not new. In her book “The Battle for Veterans’ Healthcare,” journalist and author Suzanne Gordon, who spent almost three years observing health care at the VA and talking to veterans and their families, wrote that the difficulty recruiting staff workers at the VA “is a result of the chronic underfunding of the nation’s largest healthcare system.”

William Peterson, who served 20 years in the Air Force, said he wasn’t happy with his care during several visits to a Tucson hospital in 2009 for a blood clot in his leg. After that experience, he began going to the southeast VA clinic on East Valencia and South Houghton roads. He was happy with his doctor there, whom he saw for three consecutive visits. On the fourth visit, he found out the doctor had quit.

“He was so overwhelmed with patients and so overworked that he just put up his hands and said, ‘I’m done,’” Peterson said.

Buzz Davis, a lead organizer with Veterans for Peace, says the vacancies at the VA mean staff workers, doctors and nurses are overworked.

The funding that came with the Choice Act in 2014 included $10 billion to cover veterans’ care in the private sector and it included $2.5 billion for new hires. Davis and other opponents say that money was ultimately used for things like administrative costs and private health-care services rather than bolstering the VA workforce.

In response to questions about the veterans’ concerns, public affairs officer Stanley Holmes, with the Southern Arizona VA Healthcare System, reached out to the regional VA office. Responses he provided were attributed to people working at the national level.

The VA contends that health care for veterans is not moving toward privatization. The department points to the fact that its budget has increased from $98 billion to $220 billion in the last 10 years, and the VA workforce has increased by 39 percent in that same time.

Private-sector health care, or community care, has accounted for around 30 percent of all VA appointments and about 20 percent of the VA’s health-care budget, according to VA press secretary Curt Cashour. He says the VA does not expect much of an increase in community care appointments due to increased accessibility outlined under the new law.

The Mission Act also authorizes the expansion of stipends for family caregivers and various measures to retain medical providers. Phillips calls these measures “sugar on the turd.”

While the budget and workforce at the VA has undoubtedly increased, so has the number of veterans who use the VA, up by 38 percent in the last decade, according to a 2017 analysis by the Department of Veterans Affairs.

A belief the VA is moving toward privatization is reflected on a national scale as well. Former VA Secretary David Shulkin said he was pushed out of his position because he was seen as an obstacle to privatization of the VA.

So far, the Tucson veterans who have been the most vocal about opposing the expansion of private care haven’t seen a change in their care at the VA and say the Tucson facility is one of the best in the country. In fact, the overwhelming consensus among the liberal-minded group of veterans who oppose the new law is that they’re happy with their care at the VA, while many of them have had undesirable experiences with care they received in the private sector.

“Some guys can be shaken up by going to a new place that does not treat you like the VA does,” Davis said.

Ortiz, local chapter president of the AFGE, which has a large membership among VA workers, says private-sector providers focus only on the ailment being treated, but at the VA, being treated by other veterans, patients are seen as a full person.

Driving both the Choice and Mission acts is the idea that the private sector can offer comparable care to the VA.

For the VA system as a whole, the average wait time for a primary-care appointment is five days, according to Gordon, the journalist who spent years researching the VA. In a report she co-authored, “A Congressional Guide to Veterans’ Healthcare,” she cites numerous studies that found private providers were unprepared to treat the unique challenges faced by veterans and that the VA outperformed private facilities overall.

“Instead of pouring all those billions of dollars into the private sector and making their wallets a lot thicker, redirect that money to the Veterans Administration, fully staff the veterans’ hospitals and improve the hospitals for our veterans, because our veterans deserve that plus a lot more,” Ortiz said.

Tucson veteran, 96, will be honored for volunteer work, dedication to American Legion

Helen Anderson Glass is being honored for being a continuous American Legion member for 75 years.

The H.S. Lopez Family Foundation Center of Opportunity plans to open June 3 in what used to be a Radisson on 4550 S. Palo Verde Road

The soldier's remains were unidentified for more than 70 years. 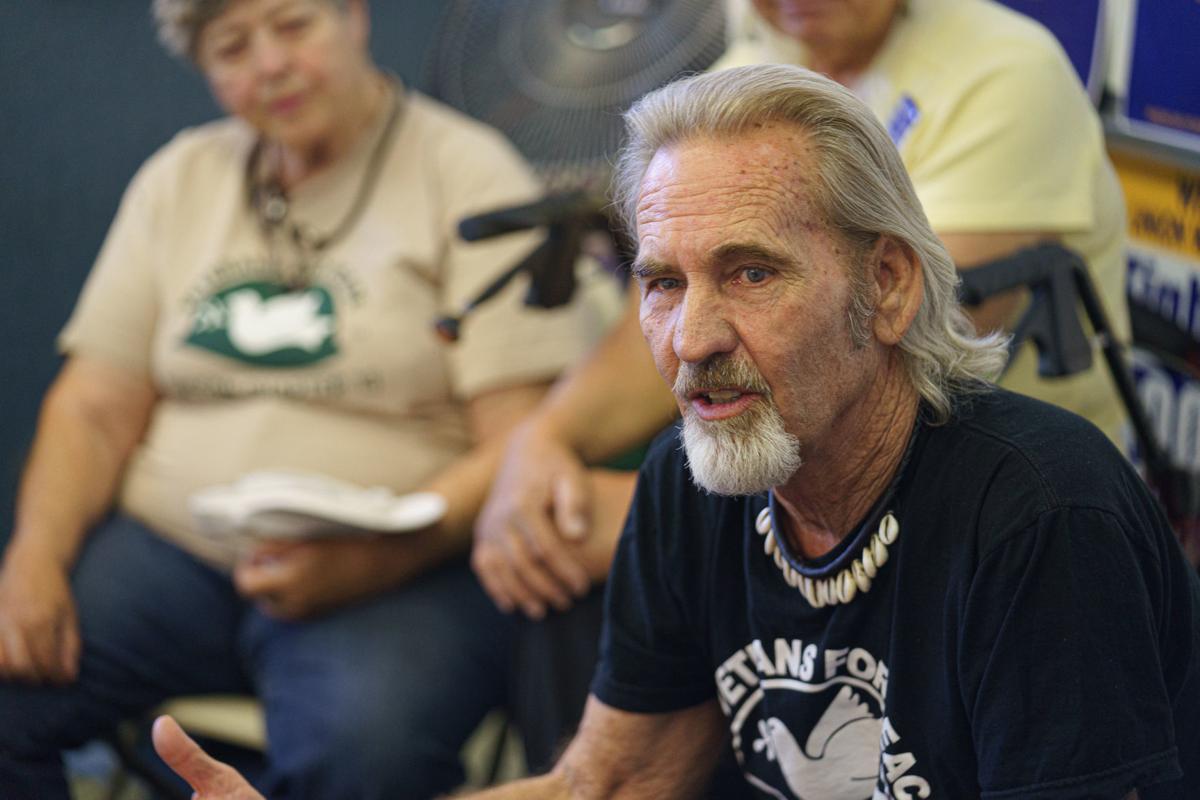 Michael Olson speaks at a panel about recent VA changes on June 27th, 2019 in Tucson, Ariz. Olson is a former Air Force pilot who's benefitted from the VA's services and is concerned about the move to private healthcare providers. 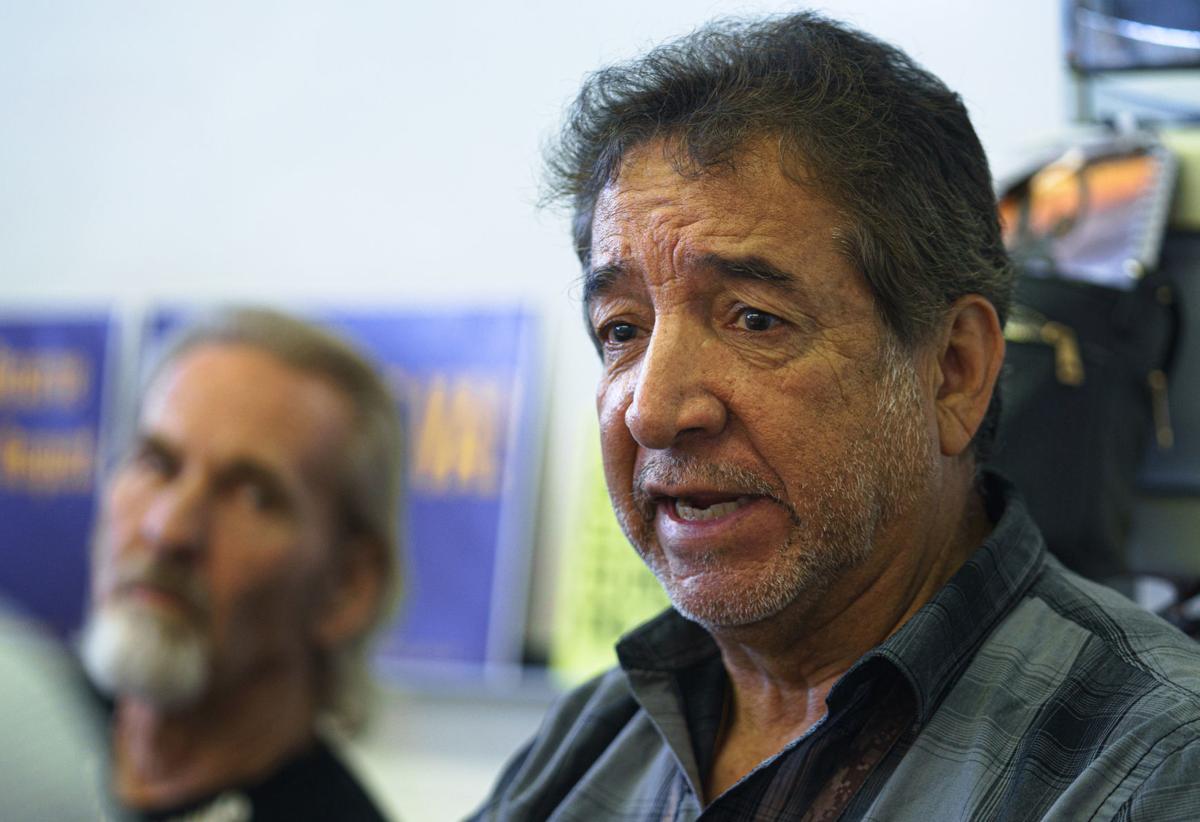 Jose Ortiz voices his opinions on recent changes to the VA on June 27th, 2019 in Tucson, Ariz. Ortiz is the local president of the American Federation of Government Employees and actively lobbies local legislators for federal benefits. 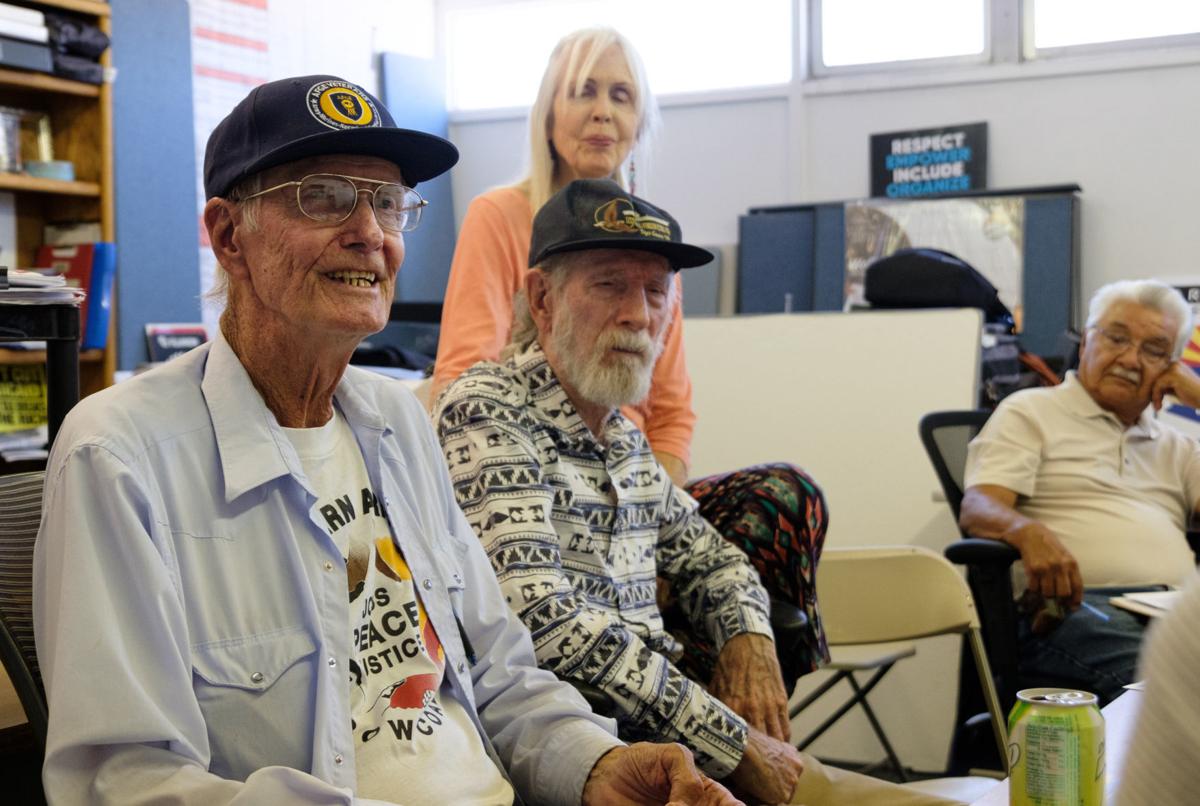 Jon Miles speaks at a panel for local veterans discussing changes to the VA on June 27th, 2019 in Tucson, Ariz. Veterans like Miles are concerned that recent changes with the VA are leading to privatization. 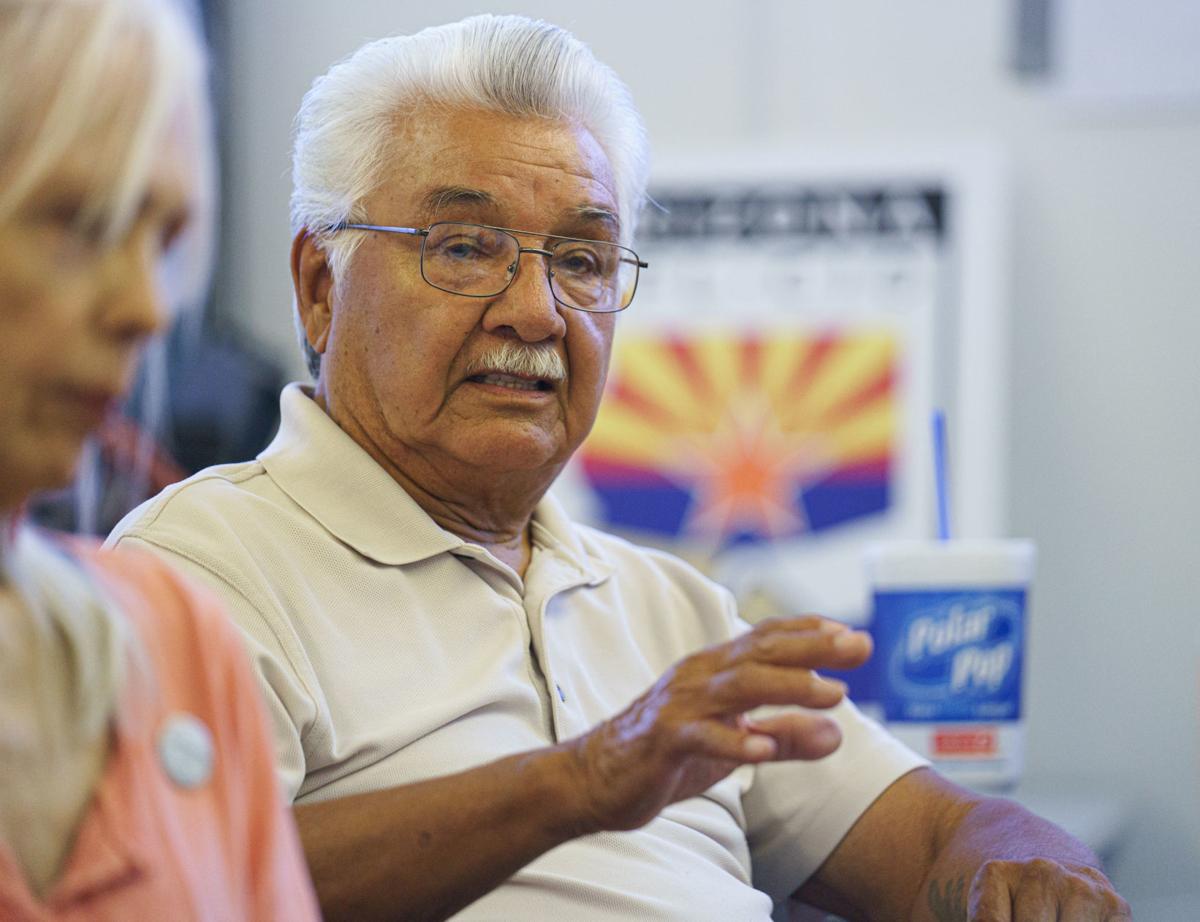 Henry Trejo speaks at a panel for local veterans discussing changes to the VA on June 27th, 2019 in Tucson, Ariz. Veterans like Trejo are concerned that recent changes with the VA are leading to privatization. 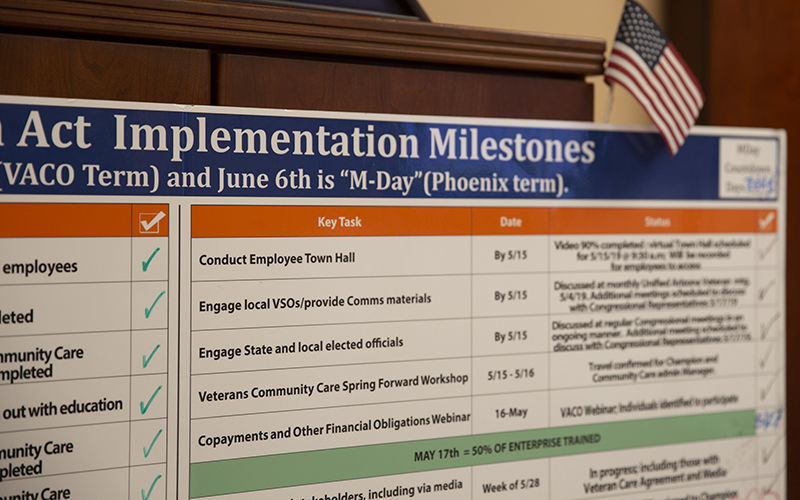 A board at the Phoenix VA shows the goals of the Mission Act, which expands veterans’ options to seek care outside the VA.