Tucson Electric puts huge solar, wind projects out to bid
Share this
1 of 2

Tucson Electric Power and other utilities are concerned that they could be forced to pay for power they don’t need. That cost would be passed on to the ratepayer. 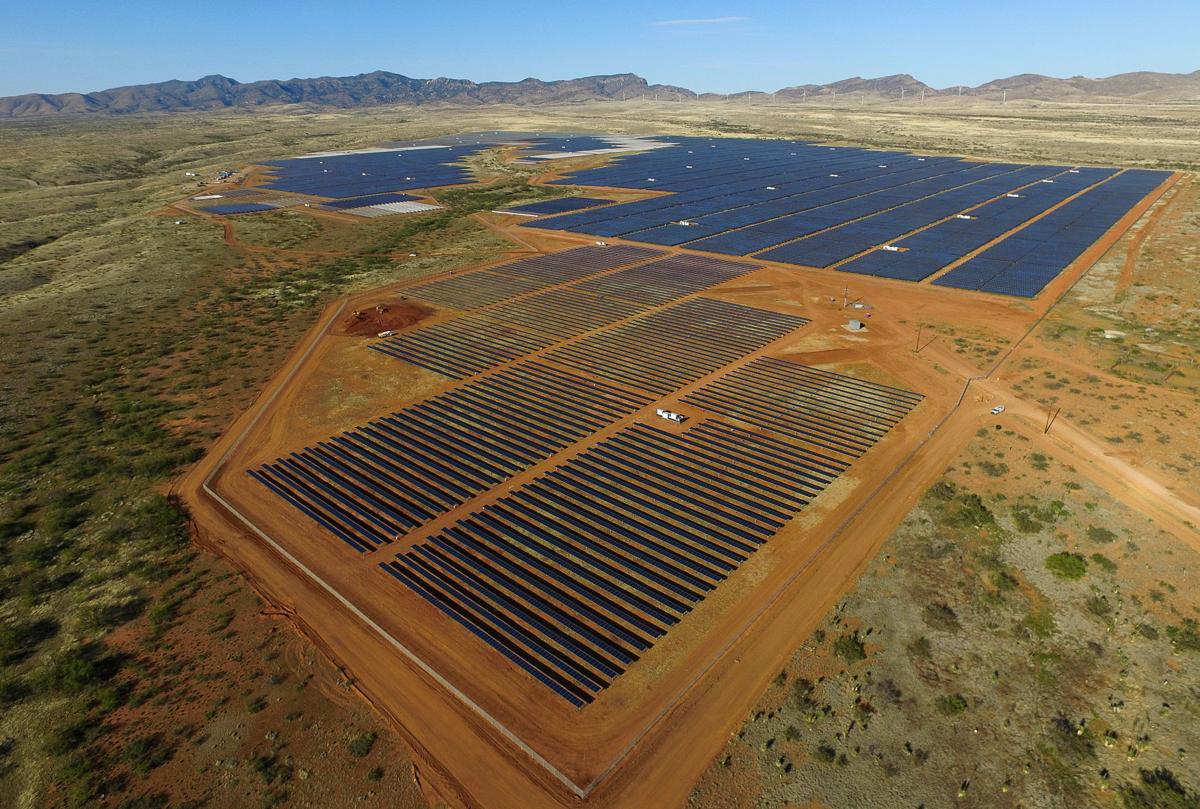 Tucson Electric Power Co. is vetting proposals for big new renewable-energy projects, including a community-scale solar array that could power more than 21,000 homes by 2019.

TEP says it issued a request for proposals Friday to buy power from a solar farm with up to 100 megawatts of capacity under a 20-year agreement.

The utility said the project could be built within TEP’s service territory or tied into existing transmission facilities elsewhere. It would be up and running by early 2019, boosting TEP’s total community-scale solar by nearly 40 percent.

TEP also is evaluating proposals submitted for a 100-MW wind-power facility that would be built and owned by a project partner.

TEP would buy power from the new facility for up to 20 years, more than doubling its current wind-powered capacity of about 80 MW, the utility said.

In a bid request now closed, TEP had sought projects that could tie into the company’s transmission facilities in the Four Corners region and along the Arizona-New Mexico border, from geographic areas with productive wind resources.

The utility said it is working to deliver at least 30 percent of its power from renewable resources by 2030, doubling the state mandate for 15 percent by 2025. TEP plans to add 800 MW of new renewable capacity by the end of 2030, boosting its total renewable energy portfolio to about 1,200 MW.

In a pending rate case, TEP is trying to reduce the rate at which residential customers who install their own grid-tied rooftop solar arrays in the future are credited for excess power. The utility contends solar customers aren’t paying their fair share of fixed grid costs usually recovered through usage charges.

TEP says prices for solar power from large solar facilities purchased through long-term agreements are about one-fourth of what they were just five years ago.

TEP’s largest company-owned solar farm is a 17-MW system switched on at Fort Huachuca in 2014. The largest solar systems serving TEP via long-term power purchase agreements are the 51.3 MW Red Horse Solar project near Willcox, the 35 MW Avalon Solar facility in Sahuarita and a 34 MW solar plant in Avra Valley.

As part of its pending rate case, TEP has asked to expand a pilot program in which the utility installs solar panels on the roofs of customers who pay a flat monthly fee for power.

The utility also has asked the Arizona Corporation Commission for permission to launch a new residential solar program, in which TEP would build neighborhood-scale solar farms and offer nearby customers the power from those facilities at a flat rate.

A state hearing judge recently recommended that TEP’s two proposals be put on hold while the Corporation Commission reviews the value and cost of rooftop solar in a separate proceeding.

Both of TEP’s bid requests are being managed by New Hampshire-based Accion Group. More information can be found at tepes.accionpower.com.

If the Corporation Commission follows the recommendation, it would mean new solar customers would get far less financial credit for the excess power they produce.

Crude-oil prices briefly surged during the election but quickly settled down.

How much are rooftop solar panels worth? Arizona utility regulators to decide

Tucson Electric Power and other utilities are concerned that they could be forced to pay for power they don’t need. That cost would be passed on to the ratepayer.