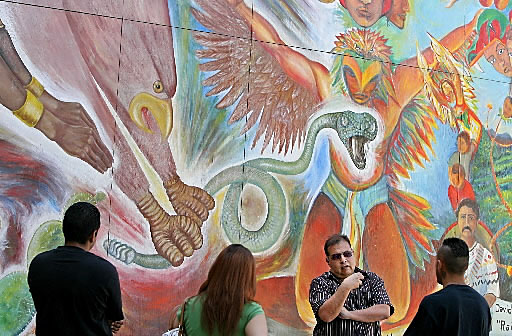 Artist David Tineo, in front of "Raices," talks with Pima College students at the Tucson Museum of Art. "Raices," which Tineo painted along with fellow muralist Antonio Pazos, has been on the museum's north-facing wall since 1992. 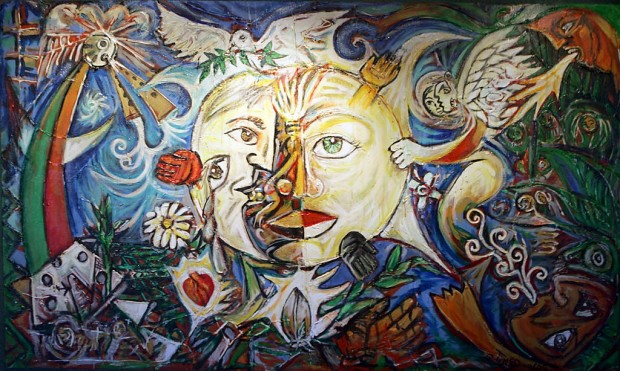 David Tineo's acrylic "Woman with Crown of Flowers" will be part of the show at TMA.

In artist David Tineo's darkening world, there is a bright light shining.

The Tucson artist, who has painted more than 200 murals and at least 3,000 paintings, has macular degeneration, which has cost him some of his eyesight.

But the partial loss of eyesight has not cut into his passion for his work. And now after 35 years of painting, educating and promoting Latino art in Tucson, the bright light will shine on Tineo's body of work.

The Tucson Museum of Art's retrospective, "¡Viva David Tineo!" opened Saturday and continues through July 3. It is the first large examination of his work at the museum.

"I see David as a very important artistic figure in Tucson, in Arizona and in the Southwest," said Fatima M. Bercht, the museum's curator of Latin American Art.

While this is the museum's first exhibition of Tineo, one of his major murals, "Raices," has graced the museum's north-facing wall since 1992. Tineo painted the large mural with fellow muralist Antonio Pazos.

For Tineo, who has been a strong advocate of elevating Latino art, his retrospective makes a loud statement on the works of Latino artists, specifically local painters and sculptors.

"Art is not only in our neighborhoods but everywhere and it should be in the museum," said Tineo during an interview late last year at South Tucson's Galeria Mistica.

Tineo, who grew up in Barrio Anita and Menlo Park, began developing his art while attending Cholla High School, where he also was an athlete.

In 1976, Tineo worked on his first mural at El Rio Neighborhood Center. It incorporates symbols of Chicano and Mexican history and the struggle for civil rights. Several years earlier, Chicano activists and barrio residents had staked their claim for a community center and, more importantly, civil rights.

"My gift is a responsibility," Tineo said of his talents and commitment to arts and activism. He also credits others for spurring him on.

His murals are scattered around town at such places as El Charro Cafe Downtown; "Compass to the Southwest" on North Park Avenue on the University of Arizona campus; "Sueño de Cuauhtémoc" at Pima Community College Desert Vista Campus; and "Historia de la Raza" at the South Tucson Civic Center.

Tineo believes about one-third of his murals have been taken down or painted over. Art evolves, as well as disappears. He understands that not all art is expected to survive.

The mural at the Tucson Museum of Art was not expected to stay. But museum officials decided otherwise and attached it to the north facing wall.

"It is a major visual component when people think of the Tucson Museum of Art," said museum director Robert Knight. "The mural has become a significant landmark for the museum."

The museum would like to preserve the 16-feet-by-60-feet mural, which has lost much of its vigorous color from its exposure to the sun and elements.

"Certainly it needs and demands to be conserved for the future," said Knight.

Assembling Tineo's work for the retrospective wasn't easy - many of Tineo's paintings are held by local collectors His early works and his sketches and drawings were more difficult to find, said Bercht.

Gene Edwards, owner of Galeria Mistica, said Tineo's work is ready for worldwide exposure. Tineo's use of spiritual symbols, mixed with images of life, are visually strong and appealing.

"His work is very necessary," said Edwards, who has hosted three shows of Tineo's art. "I believe in his work."

• Cost: $8, with discounts available. Free to members, and 12 and under. First Sunday of each month free to everyone.

Ernesto "Neto" Portillo Jr. is editor of La Estrella de Tucsón. He can be contacted at 573-4187 or eportillo@azstarnet.com

Artist David Tineo, in front of "Raices," talks with Pima College students at the Tucson Museum of Art. "Raices," which Tineo painted along with fellow muralist Antonio Pazos, has been on the museum's north-facing wall since 1992.

David Tineo's acrylic "Woman with Crown of Flowers" will be part of the show at TMA.
© Copyright 2020 Arizona Daily Star, 4850 S. Park Ave. Tucson, AZ | Terms of Use | Privacy Policy
Powered by BLOX Content Management System from TownNews.com.
You don't have any notifications.