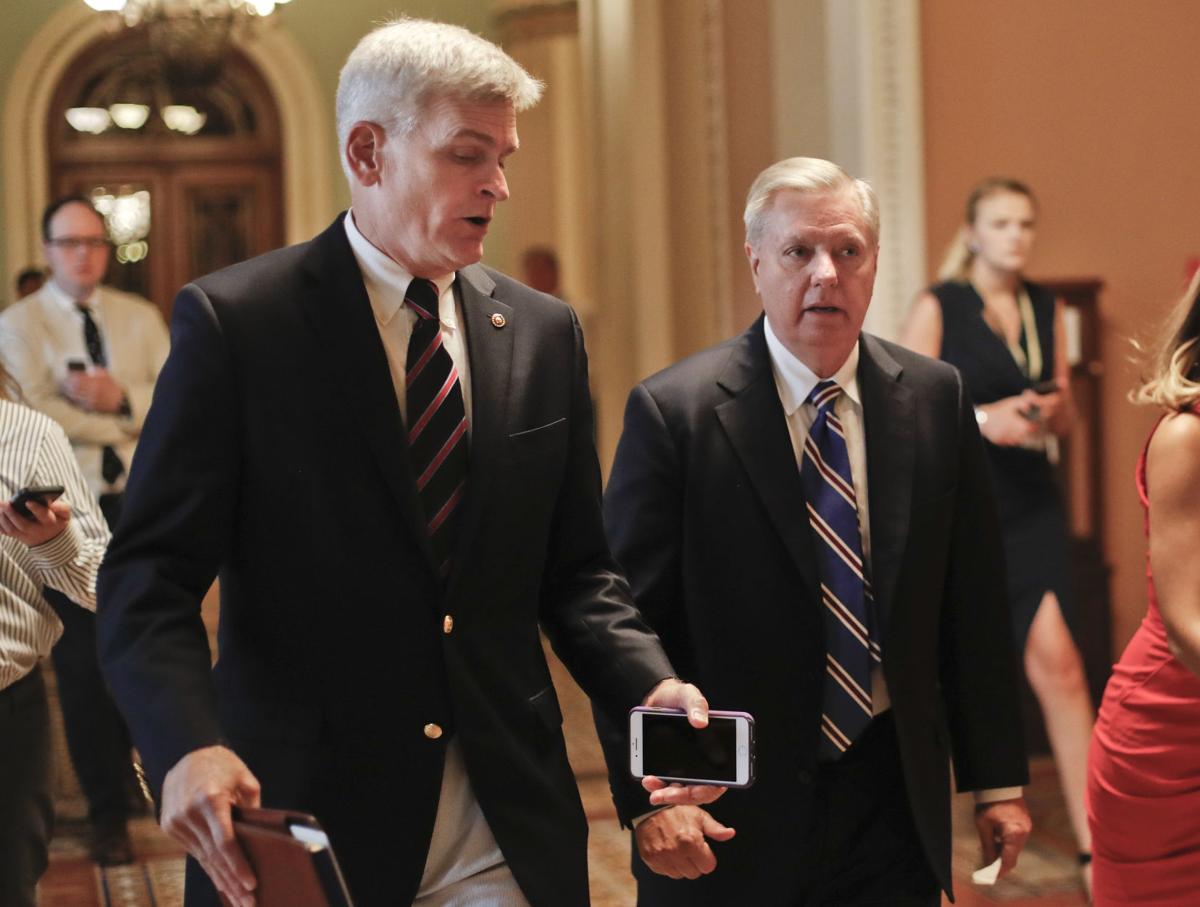 FILE — In this July 13, 2017, file photo, Sen. Bill Cassidy, R-La., left, and Sen. Lindsey Graham, R-S.C., right, talk while walking to a meeting on Capitol Hill in Washington. Senate Republicans are planning a final, uphill push to erase President Barack Obama’s health care law. But Democrats and their allies are going all-out to stop the drive. The initial Republican effort crashed in July in the GOP-run Senate. Majority Leader Mitch McConnell said after that defeat that he’d not revisit the issue without the votes to succeed. Graham and Cassidy are leading the new GOP charge and they’d transform much of Obama’s law into block grants and let states decide how to spend the money. 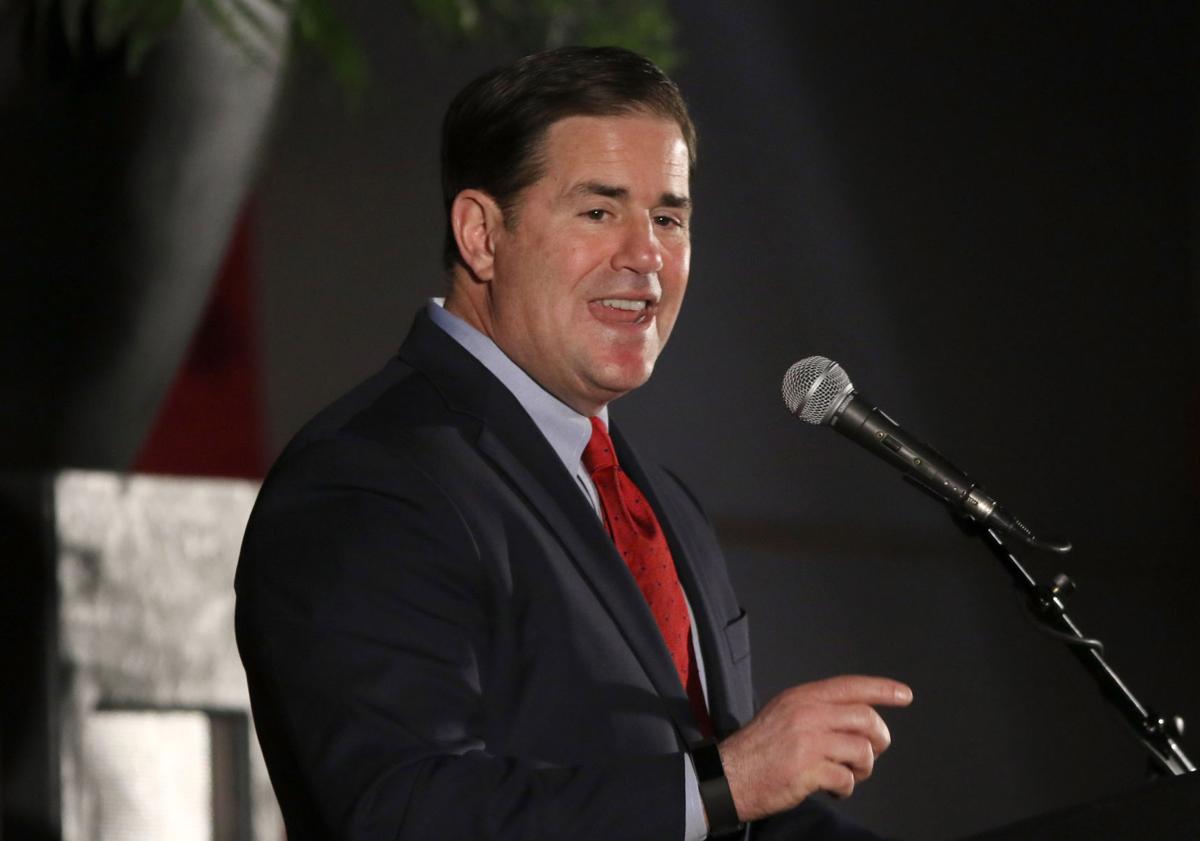 Gov. Doug Ducey has thrown his support behind the latest plan to kill the Affordable Care Act, despite estimates showing it will cost the state billions in lost federal dollars.

In a brief statement Monday, the governor called the Graham-Cassidy bill “the best path forward to repeal and replace Obamacare.”

The governor provided no details on why he supports the plan. Nor was he available for comment, having gone to Illinois for the Republican Governors Association conference.

But what Ducey did say suggested that the proposal to replace the federal program with block grants to each state meets his goal “to give states more flexibility and more options moving forward.”

Potentially more significant, Ducey is acknowledging that the window to actually do something — and do it without Democrat votes — is closing rapidly.

Senate rules that would allow approval on a simple majority self-destruct when the federal fiscal year ends Sept. 30. After that, it likely would need a filibuster-proof margin of 60 to clear the chamber, in which there are only 52 Republicans.

What makes Ducey’s support significant is not the governor himself, who has no vote on Capitol Hill.

Instead, it is his influence on John McCain, the state’s senior senator. And McCain, who refused to support earlier repeal-and-replace efforts, has said repeatedly that his backing for any plan is contingent on the views of his home-state governor.

But even that may not be enough.

McCain spokeswoman Julie Tarallo told Capitol Media Services on Monday that her boss is reviewing the bill “to assess its impact on the people of Arizona.” But she said he is wary of these kinds of last-minute maneuvers with the details hammered out in offices and sent to the floor in a rush.

“As he has said before, Sen. McCain believes health-care reform should go through the regular order of hearings, open debate, and amendments from both sides of the aisle,” Tarallo said.

Arizona’s other senator, Jeff Flake, said in a Twitter post the plan “has my support” and “ought to be brought to the Senate floor.” But that is little surprise, as Flake as backed prior efforts to repeal the Affordable Care Act.

The legislation is being crafted by three Republicans: Bill Cassidy of Louisiana, Lindsey Graham of South Carolina and Dean Heller of Nevada.

In essence, it would blow up the Affordable Care Act with its system of mandated health insurance and subsidies for those who cannot afford the premiums.

Instead, the federal cash — at least some of it — would be given to the states in the form of block grants to let them decide exactly how they want to fashion their own health-care systems for those who do not qualify for Medicaid but cannot afford commercial health insurance.

States could also scrap many of the regulations that now exist under the Affordable Care Act. And it would cut federal Medicaid dollars.

Gubernatorial press aide Daniel Scarpinato said the Arizona Health Care Cost Containment System, the state’s Medicaid program, has yet to do its own full-blown analysis of the effect of the proposal. That includes how the changes would affect the fact that the federal law has paved the way to adding more than 400,000 people to the AHCCCS rolls.

“The governor and his staff have been talking directly to those involved in drafting the legislation,” he told Capitol Media Services.

Scarpinato, however, took a slap at the conclusions reached by the Center on Budget and Policy Priorities showing that what’s in the federal bill would mean the loss of $80 billion nationally by 2026, including a $1.6 billion loss for Arizona.

And if the federal law expires as proposed in 2027 and the block grants go away entirely, the same organization puts the price tag for Arizona at $6.9 billion out of $8.6 billion in current federal dollars.

Scarpinato sniffed at the numbers. “This is a very left-wing group,” he said.

But Scarpinato did not have any immediate figure of his own. And an AHCCCS spokeswoman said any comments have to come from the Governor’s Office.

The biggest effect could surround those 400,000 now getting care through AHCCCS who were not getting it before 2013.

More than 82,000 of those are people who are earning more than the federal poverty level, $20,420 a year — the normal limit for Medicaid coverage. The Affordable Care Act expanded that to 138 percent, with the federal government picking up virtually the entire additional cost.

But to qualify for those dollars, Washington required that the state restore coverage for single adults below the federal poverty level, people whose care was eliminated as part of a budget-balancing move at the beginning of the decade. There are more than 317,000 Arizonans in that category.

And there are other implications: The state legislation to expand AHCCCS and restore coverage was made contingent on a certain flow of federal dollars. If those dry up, so does $265 million a year being collected from hospitals that finance it.

While the Ducey administration would provide nothing more than the governor’s statement of support, Democratic gubernatorial hopeful Steve Farley was more vocal.

“Endorsement of a bill that could hurt our state badly without knowing the facts of the bill amounts to governmental malpractice,” said Farley in a prepared statement.

“This loss of funding will cause real harm to our state,” he said. “For those with serious health issues, the consequences could be dire.”

What’s also working against the bill is that the Congressional Budget Office has said it cannot do a full analysis of the measure before the end of the month in terms of both costs and the number of people who would lose care.

And there is opposition from the conservative side of the slate.

Michael Needham, CEO of Heritage Action, the sister of the Heritage Foundation, said in a release that the measure “would make some improvements” over the current situation. “But it would not actually deliver on the Republicans’ seven-year campaign promise to repeal and replace Obamacare.”

The commissioner will be replaced by a Gov. Doug Ducey appointee.

Gov. Doug Ducey: Why Arizona is allowing babies at work

The City Council vote Wednesday was not unanimous, however.

She wants to limit the pills with opiates patients can get at once; outlaw paper prescriptions for them; ban doctors from giving out the drugs themselves.

Hansen's Sunday Notebook: Cats' visit to UTEP a lesson in perspective — and a trip back in time

Ducey: Too early to talk about any Trump role in re-election campaign

"These political seasons are way too long,'' the governor said of his 2018 re-election effort.

FILE — In this July 13, 2017, file photo, Sen. Bill Cassidy, R-La., left, and Sen. Lindsey Graham, R-S.C., right, talk while walking to a meeting on Capitol Hill in Washington. Senate Republicans are planning a final, uphill push to erase President Barack Obama’s health care law. But Democrats and their allies are going all-out to stop the drive. The initial Republican effort crashed in July in the GOP-run Senate. Majority Leader Mitch McConnell said after that defeat that he’d not revisit the issue without the votes to succeed. Graham and Cassidy are leading the new GOP charge and they’d transform much of Obama’s law into block grants and let states decide how to spend the money.