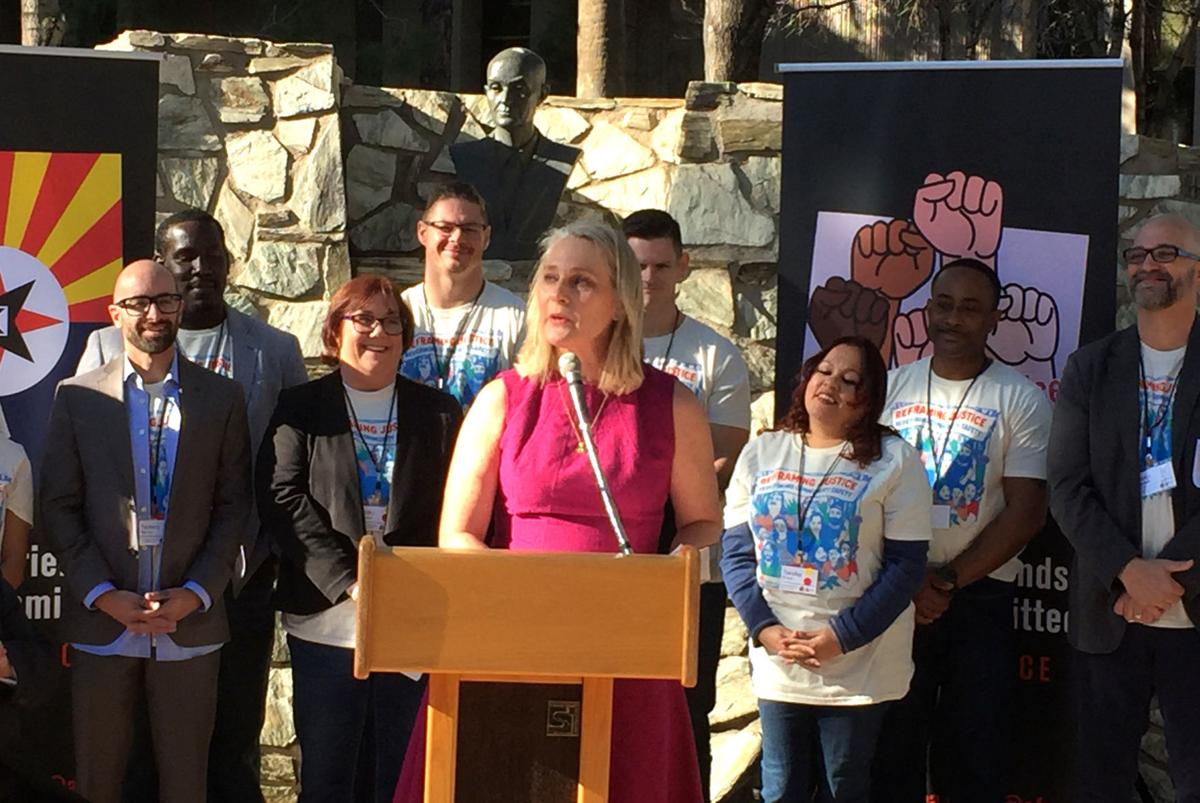 “The faster someone is rehabilitated and returned safely to the community, the better for all of us,” “Orange is the New Black”author Piper Kerman says. 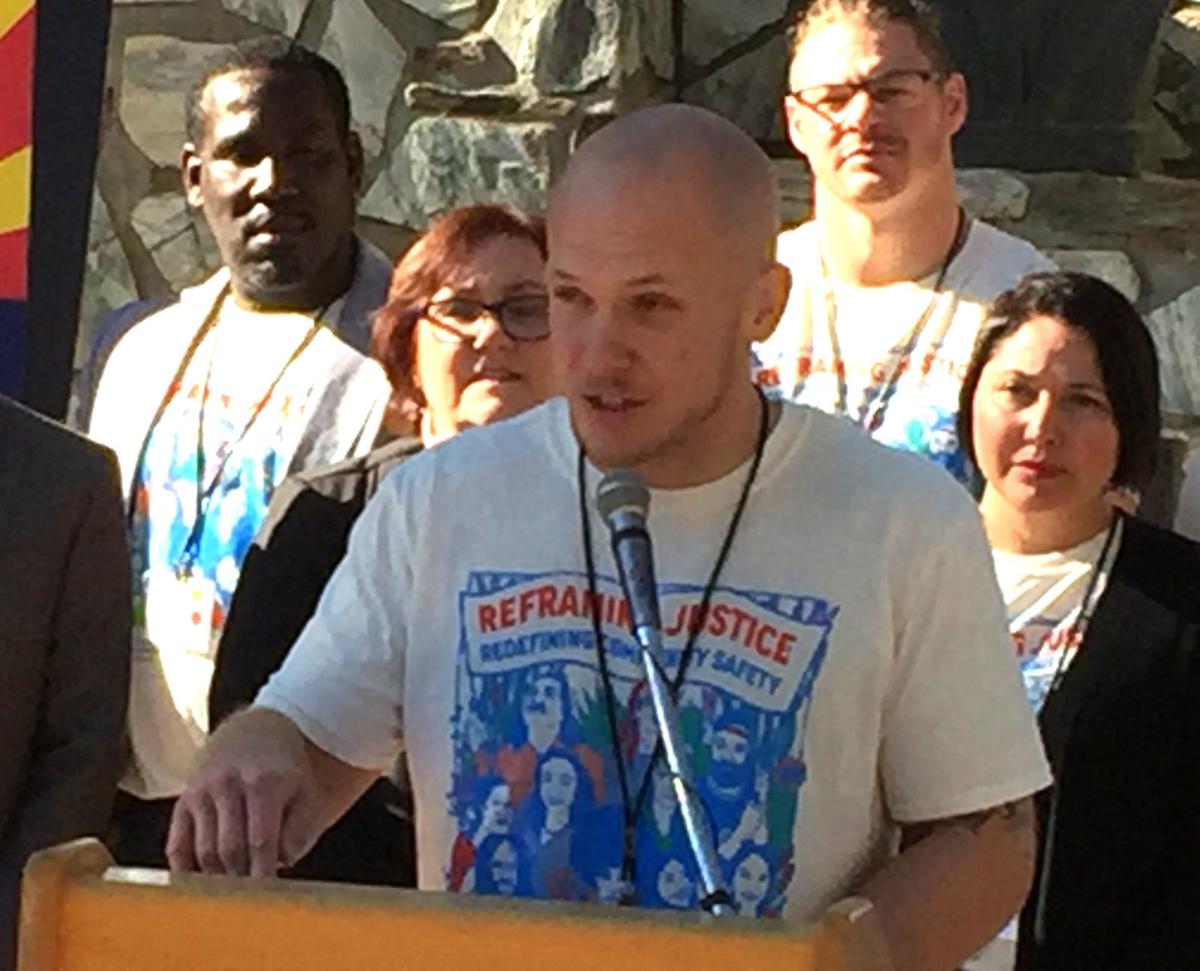 Nate McKowen at ReFraming Justice Day at the Arizona State Capitol in Phoenix. The event was organized by the Tucson-based nonprofit American Friends Service Committee-Arizona.

A criminal-justice reform bill that seeks to reduce recidivism by cutting the amount of time inmates spend in Arizona prisons drew more than 100 people to the State Capitol in Phoenix Tuesday, hopeful for the future.

House Bill 2270, introduced last week by U.S. Rep. Walt Blackman of Snowflake, would allow inmates in Arizona prisons to earn time off their sentences by taking classes, including anger management and cultural diversity.

The bill offers incarcerated people an incentive and inspires hope in a system that often feels hopeless to those on the inside, said Joe Watson, communications director for American Friends Service Committee-Arizona, who was formerly incarcerated himself.

“We went through this every six to 12 months inside, where we heard a rumor ... about some kind of relief and incentive to earn early release,” Watson said to the crowd that included dozens of formerly incarcerated people and their families, along with state lawmakers, including Rep. Kirsten Engel of Tucson.

“We’re not letting people down today,” Watson said. “This is real. You have reason to hope.”

Piper Kerman, author of the memoir “Orange is the New Black,” which focused on Kerman’s time in prison, told the crowd that Arizona lags behind the rest of the nation when it comes to adopting common-sense measures for prison reform.

“The faster someone is rehabilitated and returned safely to the community, the better for all of us,” Kerman said. “It’s totally within our grasp to fix this one.”

Kerman travels the country to help prison-reform advocates, has previously spoken about sentencing reform at the White House and testified before Congress. She’s worked closely with AFSC-AZ for more than a decade to help make criminal justice fair for all Arizonans.

Nothing in HB 2270 affects police or prosecutors’ ability to do their jobs or make decisions; it simply provides a way for people who are incarcerated to earn their way back home sooner, Kerman said.

Among other things, HB 2270 would address Arizona’s 85 percent requirement, also referred to as truth in sentencing, that says convicts must serve 85 percent of their prison sentence before being eligible for release.

Under the proposed bill, defendants convicted of violent, serious and aggravated offenses would be required to serve 65 percent of their sentence, provided the inmate undergoes programming — such as taking classes — while in prison.

For nonviolent and other types of crimes, the requirement would be reduced to 50 percent.

The bill wouldn’t apply to defendants convicted of violent crimes against children or people who are sentenced to life without parole or required to serve 100 percent of their time as part of their sentence.

“It’s a very simple proposal and one I think all Arizonans can understand,” Kerman said.

Politician and activist Pat Nolan — who spent a little more than two years in prison back in the 1990s and is a self-identified conservative — said criminal-justice reform has united people from across the political spectrum, most recently with Congress’ passage of the First Step Act, which aims to reduce the federal prison population with an emphasis on reducing recidivism.

The introduction of HB 2270 is a big step for Arizona, which has the country’s fourth-highest imprisonment rate.

“Those who keep their nose to the grindstone inside and who prepare themselves for re-entry, sure, they should get a head start at getting back on their feet,” Nolan said. “If tough-on-crime Texas can do it, if Utah can do it, Georgia and Mississippi, Arizona should be right up there with them.”

Nate McKowen was one of several Tucsonans to attend the event at the Capitol. McKowen got involved with AFSC-AZ when he was released from prison a little more than two months ago after serving an almost nine-year sentence for a fatal car crash.

McKowen told the crowd that having such a long sentence in front of him with no opportunity for early release made him turn to drugs in prison, after struggling with substance abuse since high school.

He said his drug use continued throughout most of his sentence, until one day he was talking about his upcoming release with a fellow inmate who was serving a life sentence. The inmate asked McKowen what he was going to do when he got out, and McKowen didn’t have an answer.

The prisoner serving the life sentence told McKowen that if he had a chance to go out and do something with his life, he wouldn’t waste it.

That moment would have come a lot sooner if he’d had the opportunity to reduce his sentence, McKowen said, adding that his re-entry has been difficult but he’s determined to make something positive come from his experience.

“There’s a grand swell in this state of people who are ready to stand up and say, ‘the laws we have right now aren’t working and they don’t represent our interests,’” Isaacs said. “I know that this is possible ... you’re surrounded by the best examples of the truth of the matter, which is that people can and do change for the better and they deserve an opportunity to come home to us.”

Local officials highlighted several programs for district, county attorneys from across the U.S. that can be replicated.

More than a month into the shutdown, McSally refused to comment on any specific bill that the Senate is expected to vote on later this week.

When actor Gary Sinise needed a little downtime after performing a gig with his Lt. Dan Band at Davis-Monthan Air Force Base on Sunday, he cho…

Hereford Rep. Gail Griffin says she sponsored bill on behalf of constituent and that the money could be used to help victims of sex trafficking or build a border wall.

It's a chilly morning out there! Temperatures will rise but will remain below the average for this time of year.

Nathan Sutherland, a licensed practical nurse, was arrested on suspicion of one count of sexual assault and one count of vulnerable adult abuse.

Tonight! Join us for stories of love, loss, and change at Tucson Storytellers event

From changing jobs to leaving relationships, at one point or another, we've all had to take big risks, make life-altering shifts, or completel…

Reed Soehnel now has a smashed bicycle, a broken foot and lots of bruises and cuts.

The suspicious death of man at a home on Tucson's south side Tuesday afternoon is being investigated as a homicide, officials said Wednesday.

Tucson man sentenced to life in prison for fatal 2017 shooting

A Tucson man who shot three people, killing one, was sentenced to life in prison without the possibility of release on Monday.

The Screening of "We Got This!" is free and open to the public.

The commission reviews and makes recommendations on grants for the Pima County Sheriff's Department.

The department was running on a lean staff until it recently proved to be unsustainable, the sheriff says.

“The faster someone is rehabilitated and returned safely to the community, the better for all of us,” “Orange is the New Black”author Piper Kerman says.

Nate McKowen at ReFraming Justice Day at the Arizona State Capitol in Phoenix. The event was organized by the Tucson-based nonprofit American Friends Service Committee-Arizona.