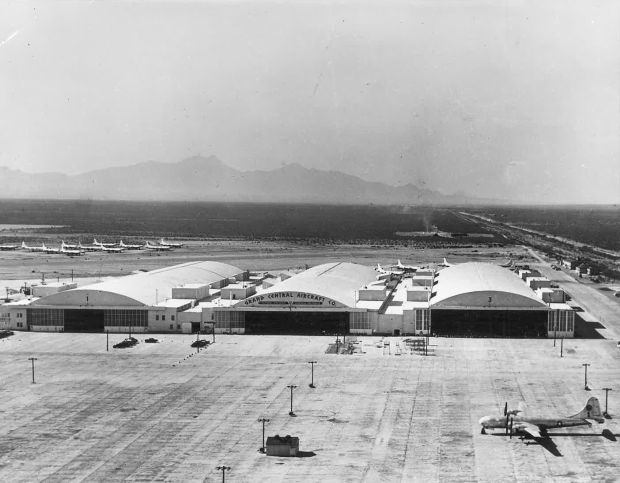 Grand Central Aircraft Co. modified U.S. Air Force B-29 bombers in the three hangars from 1948-1952. This is an aerial view of the hangars, looking south and taken around 1950. The hangars are now leased for storage. One mezzanine was a temporary campus for Pima College in 1969. 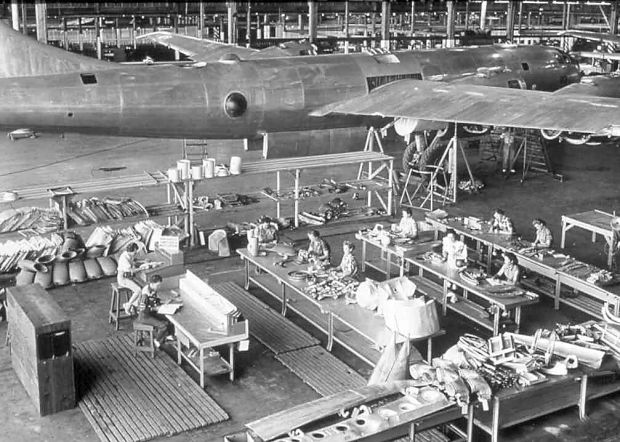 Women toiled at their B-29 modification stations inside one of the hangars sometime around 1950. 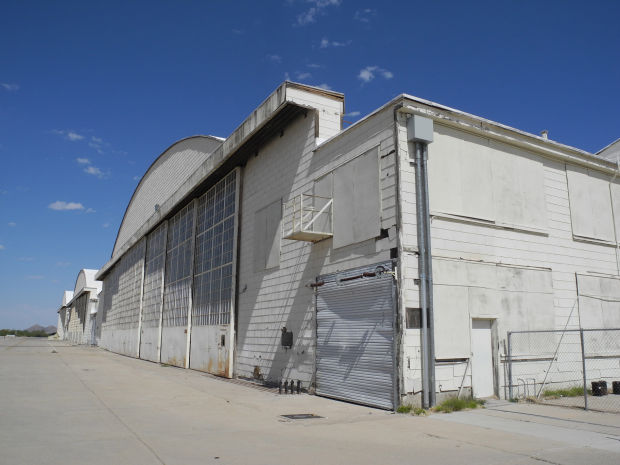 This is what the three hangars look like today. Note the huge sliding doors. This is the view from the hangars' southeast corner.

I'd like to correct a mistake I made in the final column in my six-part series on Tucson history (April 18, 2013), in which I said that during World War II Consolidated Vultee Aircraft built three large hangars at Marana Air Base. Three astute readers contacted me, telling me that the hangars were at Tucson International Airport.

Yes, those hangars are still there; I've visited them. Let me tell you their fascinating story.

During World War II, Davis-Monthan field was both an Army Air Base and Tucson's civilian airport. Seeing a need to separate military and civilian operations, in 1940 Tucson officials bought land about five miles southwest of Davis-Monthan for a future Tucson municipal airport. But before the dream of a new civilian airport could be realized, an urgent requirement to support the war effort arose. The U.S. needed a place to modify and outfit long-range bomber aircraft before sending them into battle.

So in 1942, Consolidated Vultee Aircraft (later the Convair division of General Dynamics) built three enormous hangars (and runways) at the new airport site to modify B-24 Liberator bombers.

Modified for theaters of war

The hangars were built out of wood because steel was scarce during the war. Each of the three hangars was approximately 750 feet long and 250 feet wide, with curved Quonset-hut-shaped roofs and 40-foot-high sliding steel/glass-paned doors on each end.

The center area of the hangars was open from the floor to the roof to accommodate large aircraft, but along the sides there was a second story (mezzanine) for testing aircraft avionics.

Huge 12-foot-diameter swamp coolers were placed on the roofs along the sides of the hangars, with wooden ducts to the inside to disperse cooled air. The narrow space between the hangars accommodated a cafeteria and tool cribs.

A firehouse was built about 100 yards off the northeast corner of the hangar complex. It's still there, but in a fenced, no-trespassing area.

Consolidated Vultee designed the B-24 aircraft and built them in its San Diego plant and several other factories around the country. Tucson was one of five sites that modified the new planes.

Two types of operations were performed in Tucson, as described in the July 1944 issue of Popular Mechanics magazine. Twenty-five percent of the effort was directed at preparing aircraft for the particular climate and operating conditions of the theater the aircraft would be deployed to. Seventy-five percent of the efforts involved improving the aircraft's offense and defense systems.

After World War II, in 1947, the Tucson Municipal Airport moved from Davis-Monthan field to the new location. Then in 1948, the Tucson Airport Authority was formed as a nonprofit organization whose mission was "development and promotion of transportation and commerce by air; operation and maintenance of airfields in Southern Arizona; and advocacy and support of all projects, activities and legislation for the benefit of commerce by air."

Tucson Municipal Airport operated on the west side of the airfield, alongside the three hangars that were oriented roughly north-south. The airline passenger terminal operated for 15 years until 1963, when the terminal moved to its current location and the airport earned the designation of Tucson International Airport.

Meanwhile, aircraft modification work had continued in the three hangars. In 1950, preparing for the Korean War, Grand Central Aircraft Co. leased the hangars to restore and modify B-29 bombers that had been mothballed at Davis-Monthan Air Force Base since the end of World War II. Grand Central also modified new jet-powered B-47 bombers for the Boeing Co. The Grand Central Service Center in Tucson (along with another facility in Glendale, Calif.) was recognized as the largest repair, overhaul and modification station in the country.

From the mid-1950s to 1958 the McDonnell Douglas Corp. used the hangars to overhaul civilian aircraft such as the DC-6 and DC-7.

Under the auspices of the Tucson Airport Authority, the hangars began a transition from supporting aircraft modifications to warehousing aviation parts and equipment. Today five aviation companies lease space in the hangars to store parts, mostly filling the available (442,000 square feet) of space.

With such an interesting 71-year history, I think the old hangars should be nominated as a national historic site!

Grand Central Aircraft Co. modified U.S. Air Force B-29 bombers in the three hangars from 1948-1952. This is an aerial view of the hangars, looking south and taken around 1950. The hangars are now leased for storage. One mezzanine was a temporary campus for Pima College in 1969.

Women toiled at their B-29 modification stations inside one of the hangars sometime around 1950.

This is what the three hangars look like today. Note the huge sliding doors. This is the view from the hangars' southeast corner.