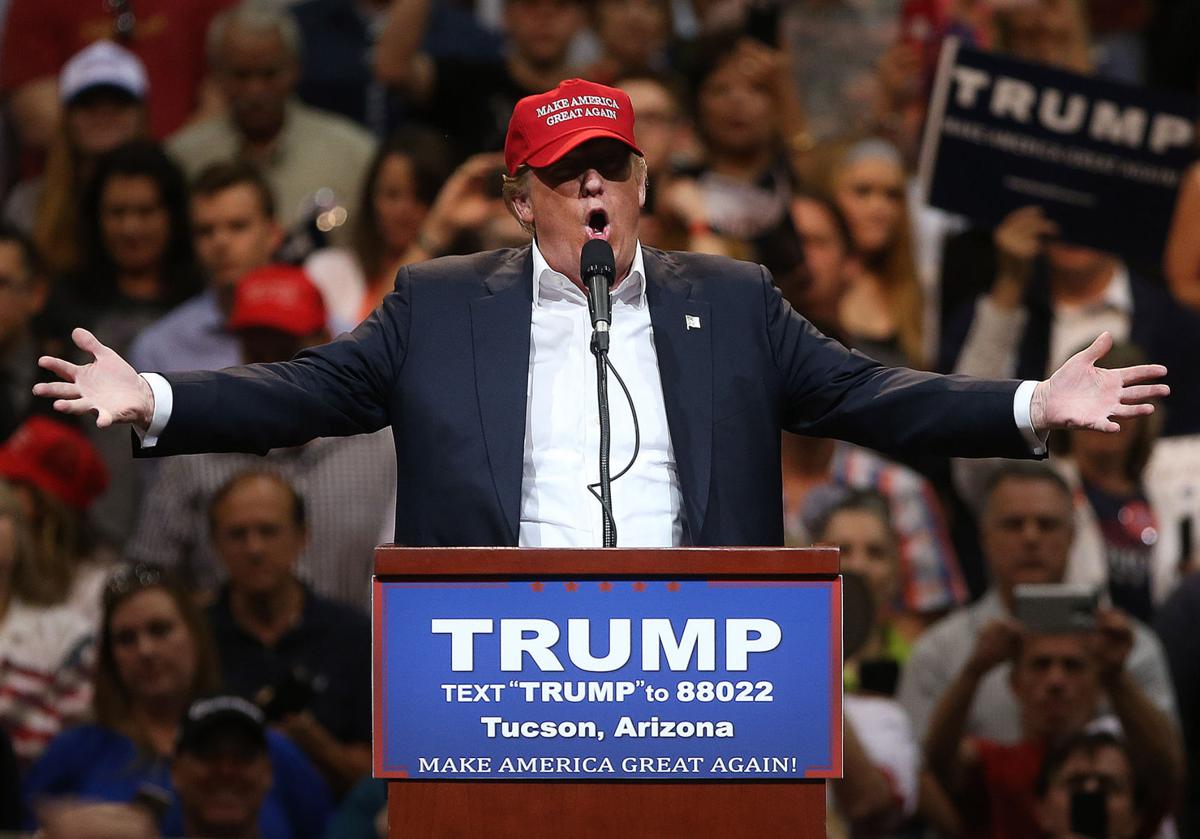 Donald Trump speaks to the crowd during his rally at the Tucson Convention Center. Trump said he “will knock hell out of ISIS” and will replace Obamacare “with something much better” during Saturday’s speech, in which he paused to wait out protester taunts. 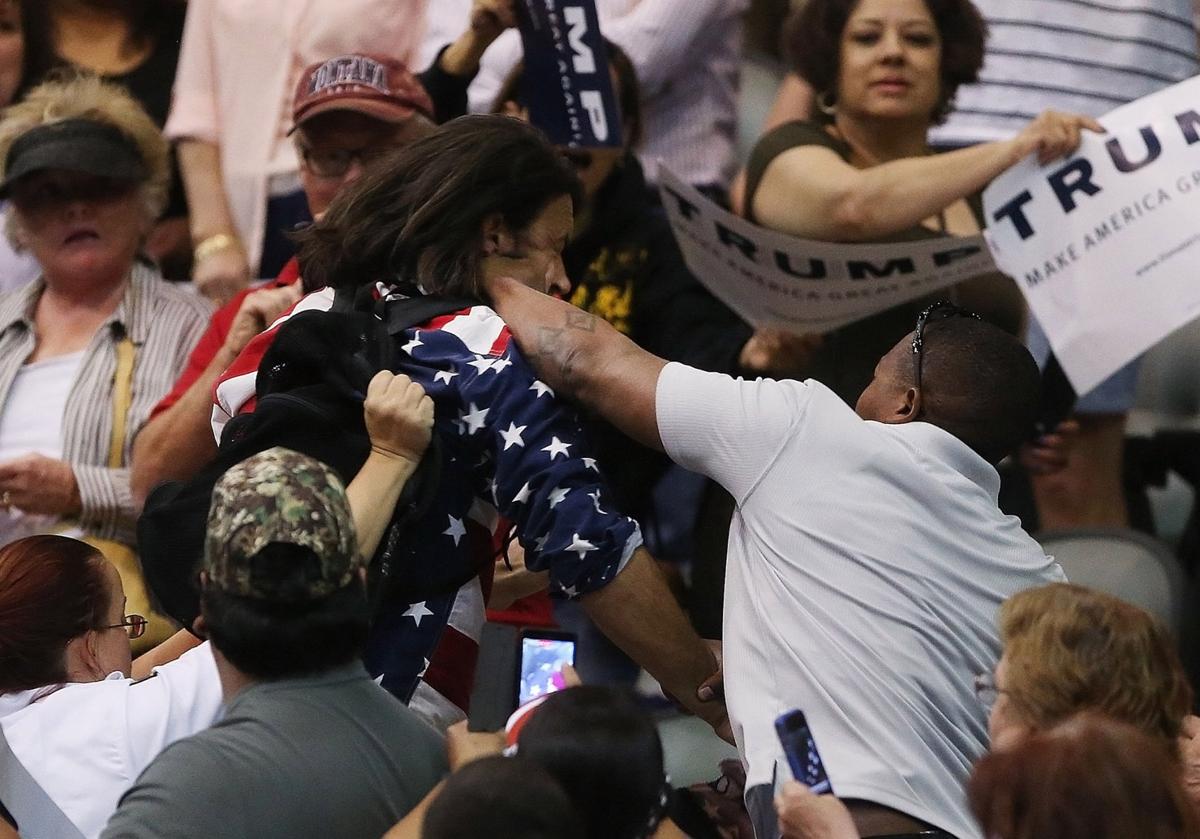 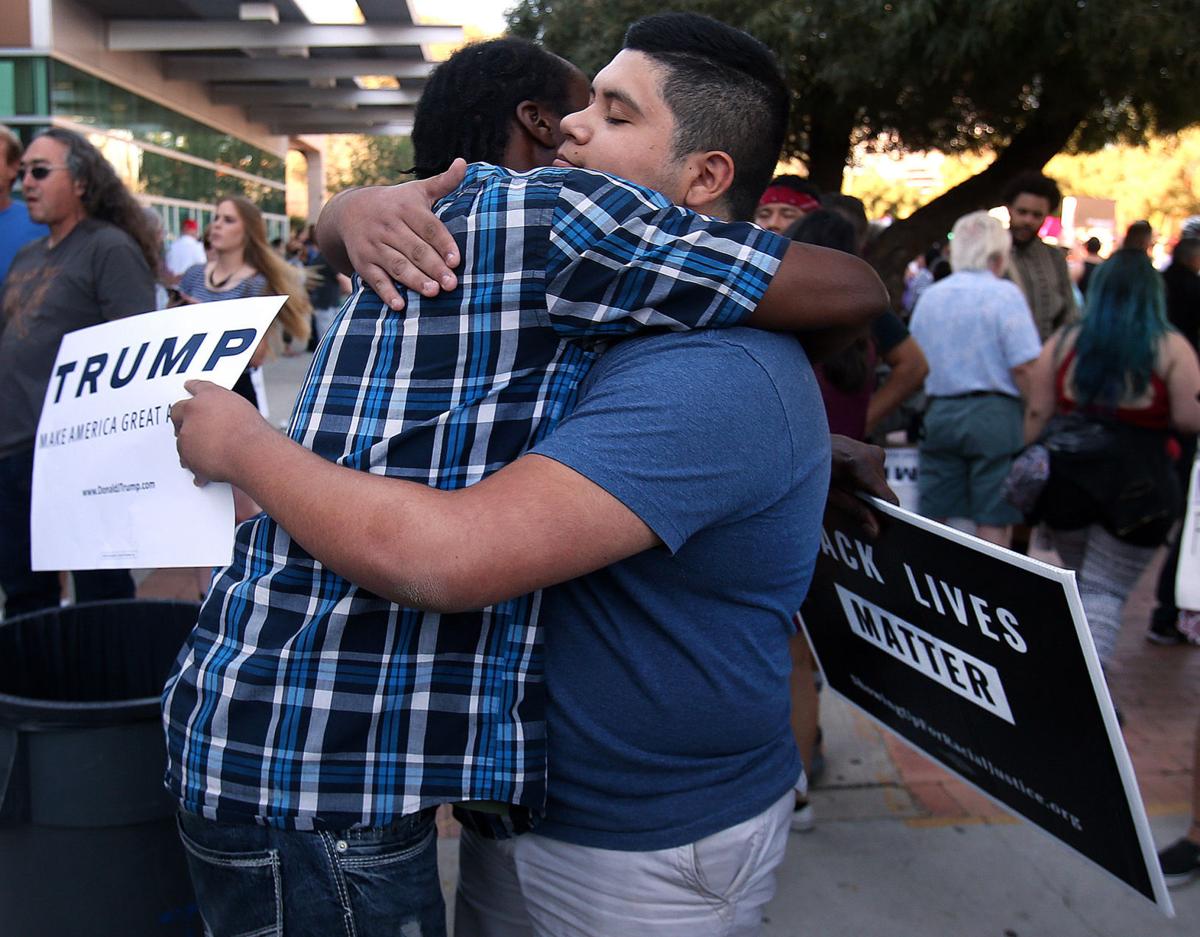 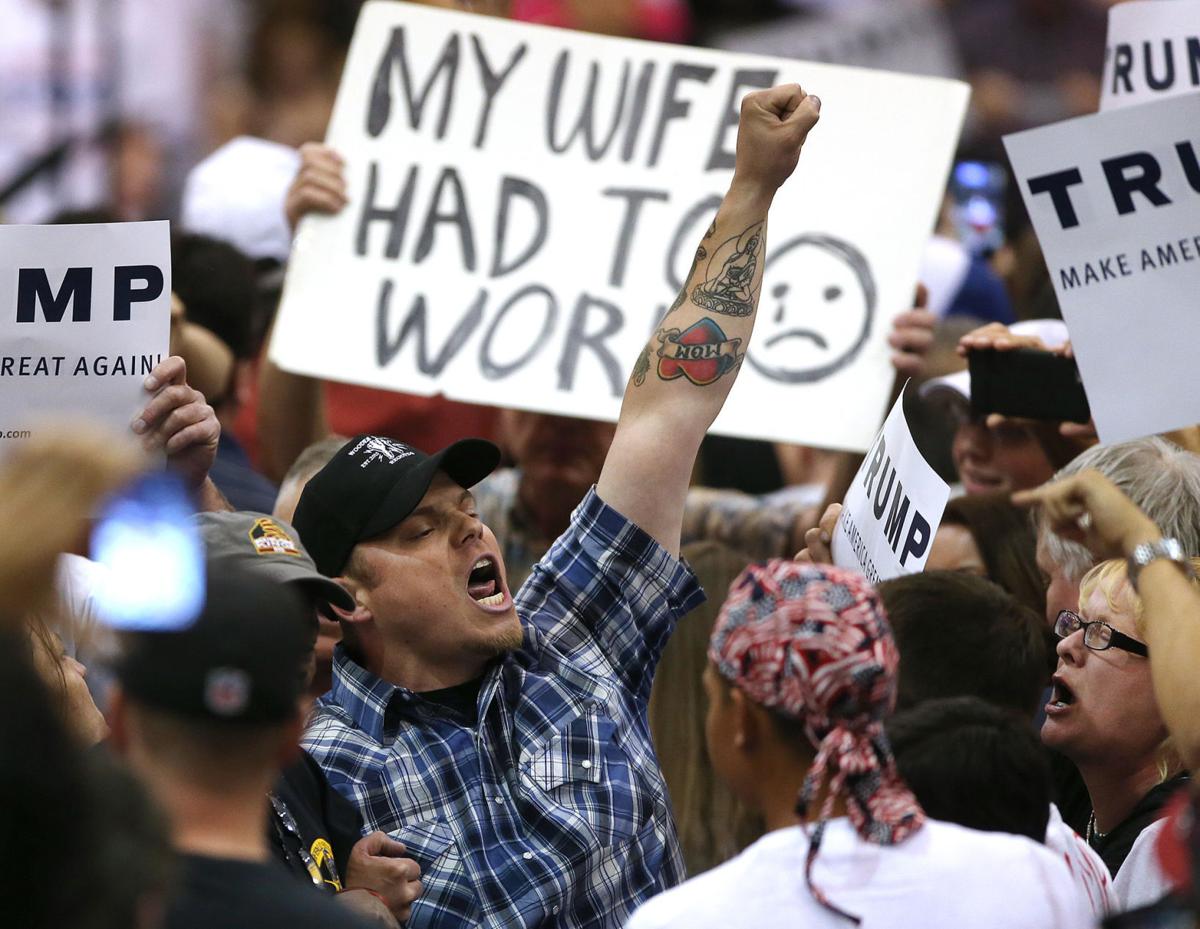 Protester Austin Counts is escorted out of the Trump rally at the Tucson Convention Center. In his speech, the front-runner for the Republican nomination said he will unify the country.

About 5,000 supporters and hundreds of protesters turned out for Donald Trump’s rally in Tucson on Saturday afternoon, and several incidents of violence erupted.

An elderly Trump supporter says he was shoved, among other scuffles, and police made two arrests, one of them after a protester was punched and repeatedly kicked by a Trump supporter.

As shouting protesters interrupted Trump about 10 times during his nearly hour-long speech, the Republican front-runner called one man “a real disgusting guy” and others “bad people who would burn the American flag,” and lamented that the protesters are “taking away our First Amendment rights.”

But Trump also appeared to have some fun, pointing to a “Latinos support D. Trump” sign in his crowd of supporters and shouting out that he loved the woman for waving it and that she must bring it to him and get a hug. After she posed, beaming, with him at the podium, Trump returned the sign.

He launched back into his familiar themes: Saying the country should be run like his businesses, calling opponent Ted Cruz “a liar” and a Canadian, and repeating, “We will build the wall!” as his fans chanted with him that Mexico will pay for its $10 billion cost.

Supporters lined up around the Convention Center, with some, like Kevin Kekic, putting finishing touches on their pro-Trump signs while they waited, others buying Trump campaign merchandise from vendors, and one mom, Jessamy Tyree, drawing an anti-Common Core education message on her 6-year-old daughter Kate’s T-shirt.

Chuck Mabdia said he arrived at 9 a.m., one of the first people in line, saying he admired the man. “Trump was cut from a different cloth,” he said.

Judy Thomas, 49, said this was her first rally: “I’ve never really liked any other presidential candidates. Like every small-business owner, I’m tired of politicians telling lies. I want him to make America great again.”

Protesters from a march that began at nearby Armory Park flooded into the parking lot shortly before 2 p.m., chanting phrases like “Trump is a racist, and so are you” at supporters who were filing into the building.

People in line took photos and videos of the protesters, occasionally shouting back as the large group circled the parking lot, stopping in front of the entrance.

Police blocked the doors shortly after the rally began, as the large group of protesters surged toward the entrance.

Tucson police and security staff removed several people from the inside of the Convention Center before Trump even took the stage, and a campaign staffer advised attendees to alert security to protesters in the audience by pointing at the person and chanting “Trump.”

Bryan Sanders said a Trump supporter punched and kicked him, grabbed the sign out of his hand as he was being escorted out of the building, and “sucker punched” him.

“I was protesting Donald Trump’s fascism, his racism, his lies and his women hating,” said Sanders, who was wearing a button-up American flag shirt. The sign he was holding when he was asked to leave read, “Trump is bad for America.”

He called the rally an angry mob. “This is not going to continue. If it takes somebody getting punched in the face, that’s what it takes,” Sanders said.

The punch and kicks were caught in news videos and photographs. Tucson police said they arrested Tony Pettway, 32, on suspicion of misdemeanor assault with injury.

Linda Rothman, 67, was also arrested inside TCC on suspicion of misdemeanor assault with no injury, said Sgt. Kimberly Bay, a police spokeswoman, who added she had no details on that incident.

Protesters Daniela Muñoz Alvarez and Veronica Encinias were also escorted out of the Convention Center, told by police they were not allowed to be at the private event.

Sarah Roberts, a member of the group White People Showing Up for Racial Justice, marched with the protesters outside the event, before heading inside. On the stairs behind the stage, members of her group stood behind its large black banner, blocking the aisle. Despite numerous calls from Trump to “get them out of here,” the group wasn’t forcibly removed.

A few steps into Trump supporter Bill Kvalsten’s exit from the Convention Center, a protester jumped on his back. Kvalsten stumbled, the protester fell off, and the altercation ended when others stepped in to pull the two men apart.

Shaken up, Kvalsten placed his “Make America Great Again” hat back on his head, but his “Trump for President” sign was lost in the scuffle.

A protest group at an exit banged on the doors, demanding that Trump be “deported.”

There were initially 130 on- and off-duty Tucson police officers on site, but 20 more were brought in, as additional resources were called upon during the course of the afternoon, said department spokesman, Sgt. Pete Dugan. Some arrived in riot gear.

“SOOOO0 proud of me”

Earlier in the day, a Trump campaign representative told the audience to be respectful and not to make contact with the protesters.

Several prominent Republicans introduced Trump, including State Treasurer Jeff Dewit, former Gov. Jan Brewer and Maricopa County Sheriff Joe Arpaio. Arpaio said he was proud that protesters at Trump’s Fountain Hills rally earlier Saturday were arrested, and suggested he would “pay a visit” to those protesting outside the TCC. Protesters blocked the road to the Phoenix-area rally with their vehicles, The Associated Press reported.

Taking the stage in Tucson in a suit and a red ball cap, Trump claimed as many as 2,500 people were waiting to get inside. Several witnesses said the Tucson Police Department closed the doors after people waiting in line to get into the event had been let in. Several late arrivals were refused entry. (Later, Trump tweeted that a total of 6,000 people turned out for him, and he thanked Tucson.)

In his speech, Trump said he will unify the country, then paused to wait out more protester taunts.

The crowd roared to life as he said, “I will knock hell out of ISIS” and will replace Obamacare “with something much better.”

He said he will make his supporters “sooooo proud of me” for undoing the nuclear deal with Iran. He said trade will improve under his watch — “I made billions of money working with China” — and that his other remaining GOP opponent, Ohio Gov. John Kasich, shouldn’t have voted for NAFTA and the Trans-Pacific Partnership.

Trump said he would reinvest in infrastructure, rebuild roads and put 300 mph trains along urban corridors.

At the end of his speech, he told the crowd they will always remember this day, and that after they turn out Tuesday to vote for him in Arizona’s presidential preference election, they will say it was “the greatest vote” they ever cast.

Voters having trouble finding polling place on Tucson's west side

The polling location for precincts 42 and 43 was moved to the Pascua Yaqui Neighborhood Center.

City covers the initial cost to provides security, but campaigns are expected to reimburse the department for expenses.

Trump supporter had his face bloodied as he tried to leave arena.

Protesters could now face up to 6 months in jail.

Hillary Clinton's campaign has paid its bill for rally at Sunnyside High School, but those of Donald Trump and Bernie Sanders still owe thousands.

Lawmaker wants enhanced punishments if assault is based on political views

Sen. John Kavanagh got idea after watching video of Trump supporter being beaten.

Donald Trump's campaign stops in the Phoenix area and Tucson on March 19, 2016.

Bryan Sanders says he was sucker punched by a Donald Trump supporter inside the Tucson rally. Video by Christianna Silva for the Arizona Daily Star

The scene inside the Donald Trump rally at the Tucson Community Center on Saturday, March 19, 2016 Video by Caitlin Schmidt / Arizona Daily Star

What it's like outside the Donald J. Trump rally in Tucson on Saturday, March 19, 2016, as supporters and protesters meet. Video by Christiann…

Mike Pence is expected to talk to voters on Tuesday, campaign confirms.

"I don't want to see any Arizonan have the rug pulled out from underneath them in terms of changing this law,'' governor said Friday.

Donald Trump speaks to the crowd during his rally at the Tucson Convention Center. Trump said he “will knock hell out of ISIS” and will replace Obamacare “with something much better” during Saturday’s speech, in which he paused to wait out protester taunts.

Protester Austin Counts is escorted out of the Trump rally at the Tucson Convention Center. In his speech, the front-runner for the Republican nomination said he will unify the country.