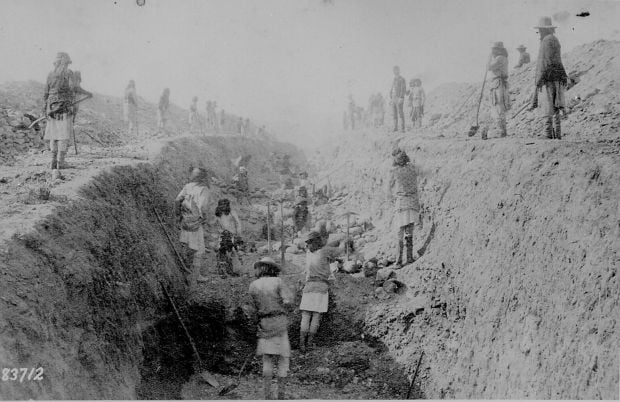 Several San Carlos Apaches work on an irrigation ditch in 1871. In the 20th century, tribal land became a significant source of peridot, a gem used in jewelry. 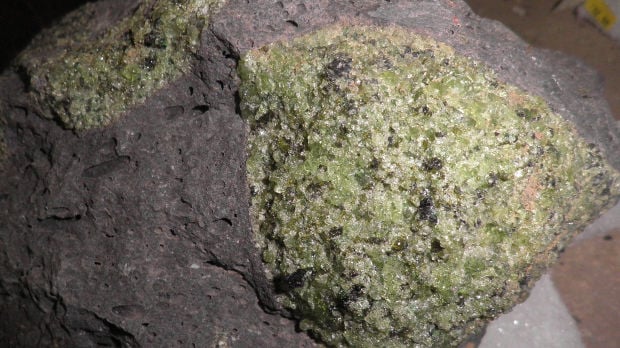 Green peridot like this is fashioned in jewelry. It is found on the San Carlos Indian Reservation.

Arizona has a rich history involving aboriginal mining, sometimes digging for minerals and other times scouring the Earth's surface.

The state's earliest known mines date to the latter centuries of the Aboriginal Period, between A.D. 1000 and the middle of the 16th century with the arrival of the Spanish.

The Hohokam - known as the prehistoric people of the Southwest or the "vanished ones" - mined for clay, coal, hematite, salt, turquoise and quartz. They established trade routes between distant tribes to obtain commodities that were scarcer in their home regions.

The Hohokam lived in Arizona between 200 B.C. and A.D. 1450. Although they did not mine underground, they did undertake surface mining, gathering useful and colorful material for trade.

One notable area in Arizona that was mined by the Hohokam was the Black Mesa north of the present town of Holbrook in Navajo County. That's where in the 13th century they discovered that coal could be used as a source of heat and for baking pottery.

Over the next three centuries the Hohokam extracted 100,000 tons of coal for use in domestic heating and cooking.

The aboriginals also mined salt, including around A.D. 1200 at what is now Camp Verde in Yavapai County. There they removed layers of salt mixed with sand, gravel and clay.

The towns of Courtland and Gleeson, located only three miles apart in Cochise County, comprise the center of what became known as the Turquoise District - named after an old mining camp known as Turquoise.

The Hohokam used turquoise in the manufacture of jewelry and other items. They considered the semiprecious mineral to be a medicine stone.

Beginning with early prospecting by Native Americans up through the Industrial Revolution, mining in what's known today as Southeastern Arizona became an indispensible means for establishing the local economy among tribes, mining camps and towns.

By the 18th century, several hundred years after the Hohokam disappeared, the Spanish mined the area, discovering silver deposits for their king while establishing colonies on their ultimate journey to found San Francisco. They used tribal labor to work the mines for silver.

Before the Gadsden Purchase in 1854, the then-Papago Indians are said to have mined placer gold in the arroyos surrounding present-day Ajo.

Native Americans discovered the Lost Escalante Gold Mine in the Santa Catalina Mountains in 1698. The mine, which was worked intermittently, became known as the Mine With the Iron Door.

And it is rumored that Apache Chief Cochise maintained a hidden gold claim somewhere in the vicinity of the Chiricahua Reservation in the early 1870s.

Native Americans in Arizona continued their involvement with mining ventures in the 20th century, including working seven asbestos mines on the San Carlos Apache Reservation.

This type of mining exposed miners and communities to high levels of radiation that led to an increase in lung cancer and various types of fibrosis. Since the 1970s the Navajo Nation has fought to ban uranium mining on its lands.

Mine Tales is a new weekly column. Email writer William Ascarza at mining@azstarnet.com

William Ascarza is an archivist, historian and author of five books, including "Sentinel to the North: Exploring the Tortolita Mountain Range," available at Antigone Books and Cat Mountain Emporium. Sources: Wilson, Eldred D., "Geology and Ore Deposits of the Courtland-Gleeson Region," Arizona Bureau of Mines Bulletin 123; "Mineral and Water Resources of Arizona," Arizona Bureau of Mines Bulletin 180; Mitchell, John D., "Lost Mines of the Great Southwest"; Sloane, Howard N. and Lucille L., "A Pictorial History of American Mining From Pre-Columbian Times to the Present Day"; "Uranium Mining and Activities, Past and Present."

Several San Carlos Apaches work on an irrigation ditch in 1871. In the 20th century, tribal land became a significant source of peridot, a gem used in jewelry.

Green peridot like this is fashioned in jewelry. It is found on the San Carlos Indian Reservation.