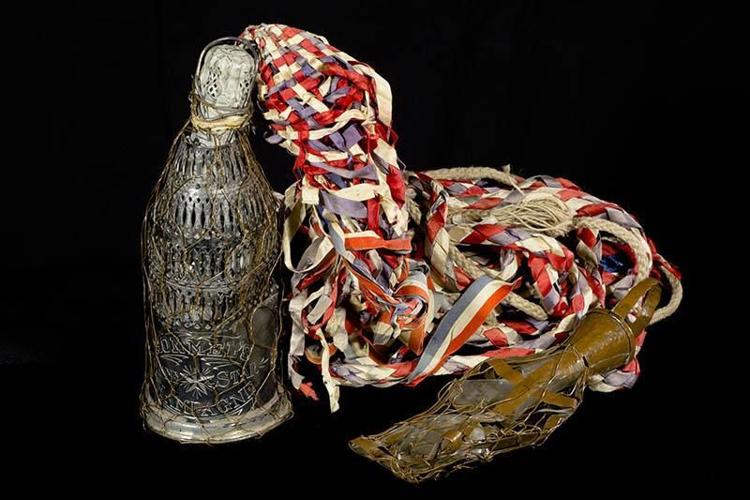 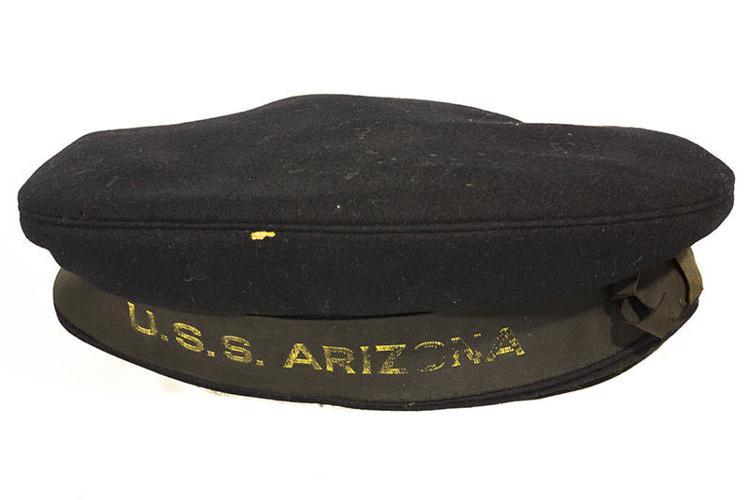 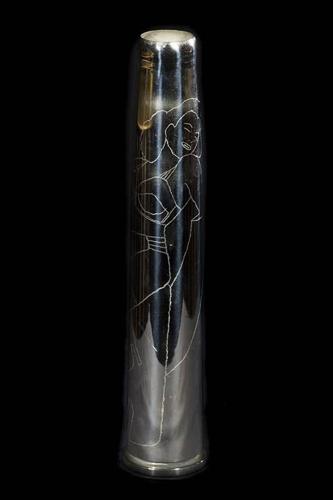 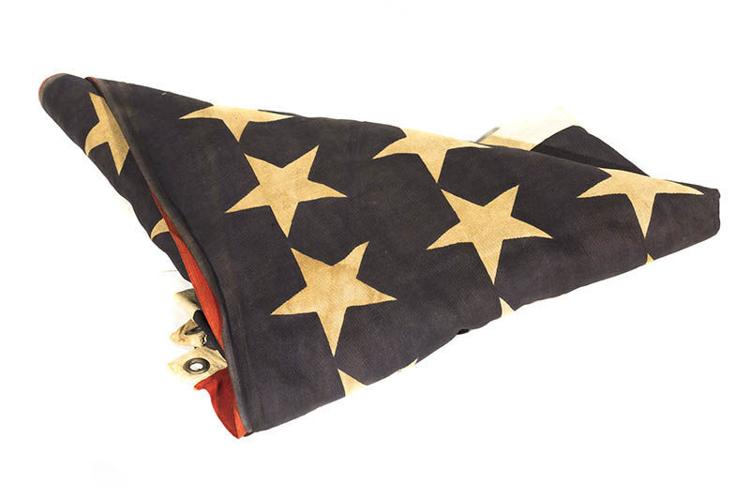 The University of Arizona’s extensive USS Arizona historical collection includes the first flag flown over the sunken battleship on March 7, 1950, as a memorial was developed at the site in Pearl Harbor. 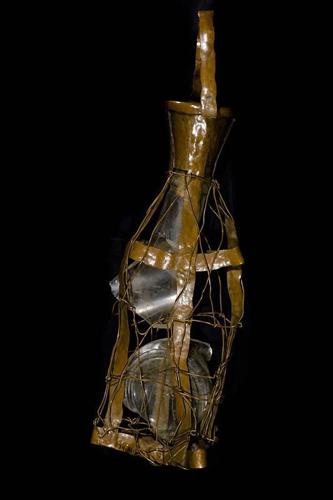 The water bottle used in 1915 to christen the USS Arizona is part of the collection of artifacts being preserved at the UA. 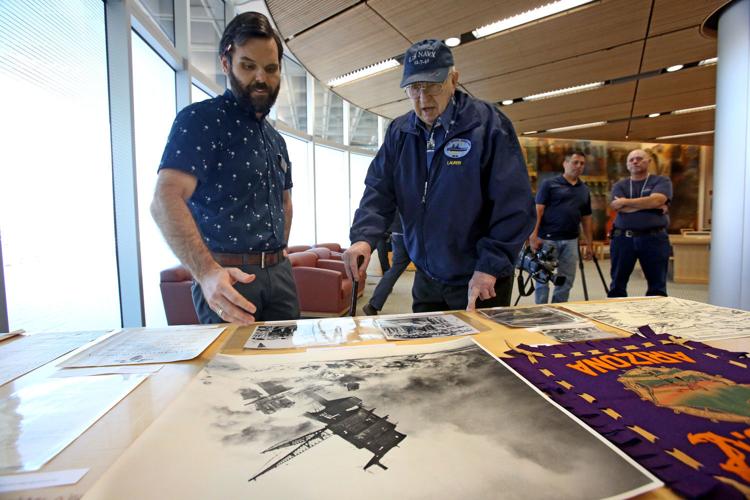 Curator Trent Purdy, left, views some Pearl Harbor memorabilia with USS Arizona survivor Lauren Bruner during an event at University of Arizona’s Special Collections in 2015. Bruner died in 2019 at age 98.

Alcohol had just been outlawed in Arizona, so a compromise was struck when the new state’s namesake battleship was launched on June 19, 1915. Two bottles were used to christen the USS Arizona — one filled with champagne, the other with water from Roosevelt Lake on the freshly dammed Salt River.

The champagne bottle from that ceremony has spent the past few decades on display inside the student union at the University of Arizona.

The water bottle lives a quieter life these days, tucked away inside Box 43-A in the climate-controlled basement of the UA Libraries’ Special Collections.

That’s where the university keeps some 15,000 historical items connected to the battleship, which was destroyed in the Japanese attack on Pearl Harbor 79 years ago today, killing 1,177 people on board.

“It’s a lot more than you would think, right?” said Trent Purdy, curator of the collection. “We’re an academic library. We’re not a museum. We don’t normally take in three-dimensional objects like this.”

Only the Pearl Harbor National Memorial in Hawaii has a larger collection.

Saved from boxes in the bell tower

People started donating USS Arizona memorabilia to the university in the late 1940s, after one of the ship’s bells was saved from a salvage yard and turned over to the UA to be hung in a tower built especially for it at the student union.

Purdy said the USS Arizona Reunion Association soon began holding annual meetings in Tucson around the time of the Dec. 7 anniversary, and its members would bring along old photos and keepsakes to add to the growing collection.

Early on, the university didn’t seem to know quite what to do with all of it. For years, donated items were kept in cardboard boxes inside the not-so-climate-controlled tower beneath the ship’s bell.

Then in 1984, Billy Joe Varney, the long-time director of the student union, went looking for someone to curate the collection. Ellen Lomonaco, an anthropology graduate student with two young daughters at home, ended up with the job.

“There was just stuff, and nobody knew what was in there,” said Lomonaco last week by phone from her home in Denver. “Stuff was just going to disintegrate if it stayed there much longer.”

She would spend the next 18 months or so cleaning up and cataloging the material, then transferring it into archival storage sleeves and boxes to keep it safe. Her office was a small room behind the student union art gallery.

Archiving heirlooms is a “heavy responsibility”

Along the way, Lomonaco collected more artifacts, recorded oral histories with three men who served on the Arizona before 1941, and upgraded and expanded the small memorial exhibit at the student union.

And she documented it all in several large binders that Purdy said he still references all the time.

“This collection wouldn’t be in the shape it’s in today without her work,” he said of Lomonaco.

Purdy started working in Special Collections as a student in 2010 and joined the library staff in 2013.

Before being named curator of the USS Arizona collection, he conducted his own detailed inventory of the material to create an electronic “finding aid” for every item.

Purdy said he still gets about half a dozen calls or emails a year from people with scrapbooks and other items they’d like to add to the collection.

It’s a “heavy responsibility,” but it’s also gratifying that people trust them with such treasures, he said. “In a lot of cases, these are family heirlooms.”

Student union exhibit due for an upgrade

Special Collections will accept anything of historical or academic significance, “as long as it’s within reason,” Purdy said. “We can’t take in an anchor or a desk. We just don’t have the space to house those types of materials.”

Purdy is now planning the first major update in decades for the USS Arizona exhibit at the student union. He said he hopes to showcase some items from the collection that have never been on display before.

His goal is to finish the new exhibit in time for the 80th anniversary of the attack on Pearl Harbor next year.

“Fingers crossed, that’s what we’re planning for,” Purdy said. “I was chugging along pretty good getting items picked out (for it) before the pandemic hit.

“There’s so much great stuff in this collection that I’m excited about,” he added.

One of the larger objects is a twisted piece of the battleship’s superstructure. The 4-foot length of rusted metal was recovered from a Navy scrapyard in Hawaii and donated to the university in 1995.

Other objects include uniforms, flags, spent ammunition, chunks of shrapnel and debris from Japanese aircraft shot down over Pearl Harbor during the attack.

Box 43-I contains a golden pendant stamped with a picture of the ship — and attached to a paper checklist of popular dance steps of the era — that was handed out to sailors at the 1923 Anniversary Ball.

Box 45-B holds a sword, recovered from the sunken ship by divers before the wreckage was sealed, that may have belonged to one of the Arizona’s officers.

According to its description in the collection’s catalog, the sword was once X-rayed, revealing the name of the officer. “Unfortunately, through history that name has been lost,” the catalog states.

Collection offers connection to the past

Among Purdy’s favorite objects is a spent shell casing from a 40mm anti-aircraft gun that has been polished and decorated with an etching of a pinup girl.

He said it really captures what it must have been like for a bored and lonely young kid who was stuck at sea for weeks at a time with around 1,500 other men.

The shell casing was one of 400 items that were donated to the UA in 1977 by William Watkins, a 23-year Navy veteran from West Virginia who served on the Arizona for seven years in the 1930s.

Like Purdy, Lomonaco said her favorite items were the ones that reflected daily life on the ship, including the picture frames, ashtrays and artwork the sailors would fashion out of spent ammo during their down time. She also can’t help thinking about that second bottle from 1915, when the battleship was first launched from the New York Navy Yard, just a few miles from where she grew up in Brooklyn.

“You never christen a ship with water because it’s bad luck,” she said.

Lomonaco admits she didn’t know very much about the attack on Pearl Harbor when she first started sorting through the collection, but by the time she was done, she felt an unshakable connection to the ship and its crew.

In 1986, a few months after she finished her work for the university, she took a family trip to Hawaii and visited the USS Arizona Memorial for the first time.

Due to the ongoing coronavirus pandemic, the Navy ROTC at the University of Arizona will host a virtual event for Pearl Harbor Remembrance Day starting at 6:25 a.m. Monday, Dec. 7.

The program will include presentations on the history of the USS Arizona and the Japanese attack and video of the annual bell-ringing ceremony at Pearl Harbor.

The ceremony can be accessed via the Zoom online meeting website at: https://arizona.zoom.us/j/86836523865

An online digital exhibit on the USS Arizona by Special Collections at the University of Arizona can be found at: http://tucne.ws/ec7exhibit

For a complete list of items in the USS Arizona historical collection at UA Special Collections, go to http://www.azarchivesonline.org and search for "USS Arizona."

NATICK, Mass. — A World War II museum in Massachusetts is displaying artifacts commemorating the Pearl Harbor attack ahead of the Dec. 7 anniversary.

The International Museum of World War II says it recently acquired a life ring from the USS Arizona.

The battleship was among those destroyed in the surprise attack by Japan on the U.S naval base in Hawaii that prompted the U.S. to enter the war in 1941.

The ship's sunken remains are now a national memorial.

The museum, located in the Boston suburb of Natick, also displays many other artifacts related to the attack.

Among them is Japan's formal declaration of war against the U.S., pieces of Japanese planes shot down at Pearl Harbor and women's panties that read: "Remember Pearl Harbor, Don't Get Caught with Your Pants Down."

A small group of people gathered at the USS Arizona Mall Memorial on the UA campus on Dec. 7 to honor the 1,177 sailors and Marines who died o…

Project designer David Carter talks about the new memorial and what makes it so special.

The Arizona Western Film Movieseum is slated to open next fall and will house 50 years of memorabilia collected by the late Old Tucson Founder Bob Shelton.

After more than five years, a retired Tucson editor has completed profiles of all 1,177 sailors and Marines who died on the USS Arizona on Dec. 7, 1941.

A Pearl Harbor remembrance ceremony will be held at 7:15 a.m. Tuesday, Dec. 7, at the USS Arizona memorial on the University of Arizona Mall.

The University of Arizona’s extensive USS Arizona historical collection includes the first flag flown over the sunken battleship on March 7, 1950, as a memorial was developed at the site in Pearl Harbor.

The water bottle used in 1915 to christen the USS Arizona is part of the collection of artifacts being preserved at the UA.

Curator Trent Purdy, left, views some Pearl Harbor memorabilia with USS Arizona survivor Lauren Bruner during an event at University of Arizona’s Special Collections in 2015. Bruner died in 2019 at age 98.