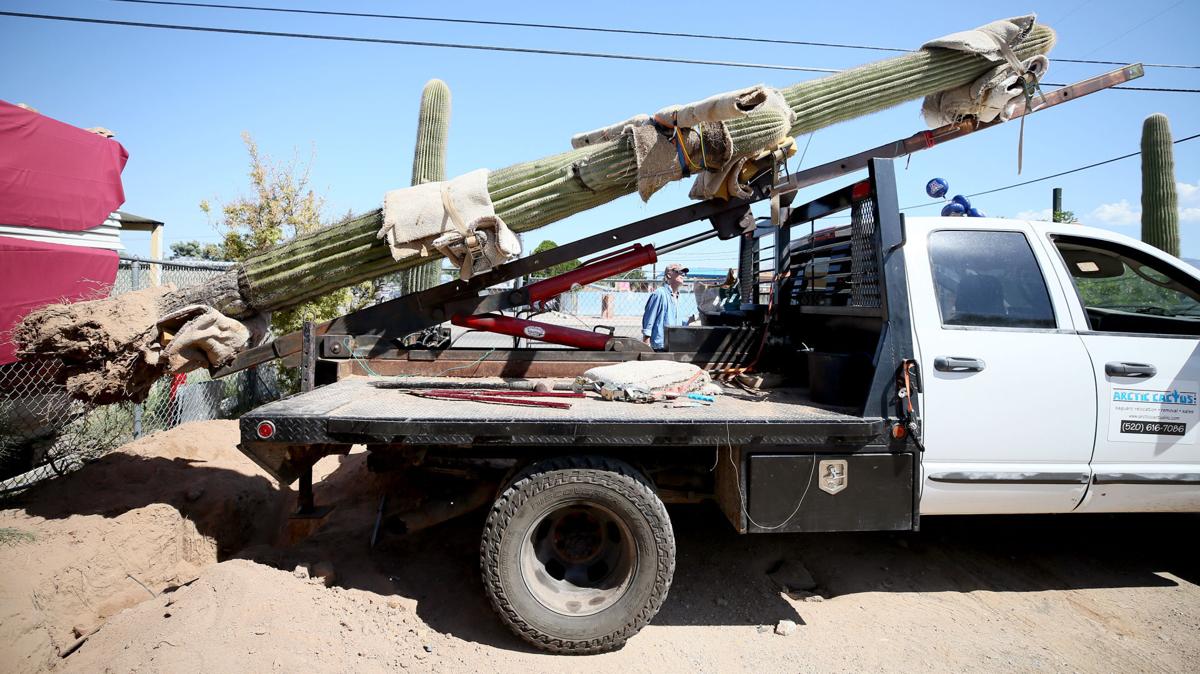 Amazon is re-gifting the 21-foot saguaro, which was set to go to its headquarters, to the Arizona-Sonora Desert Museum.

Six days after Tucson economic-development officials announced they were sending a 21-foot saguaro to Seattle, Amazon company officials got back to them and said they weren’t accepting any gifts. In effect, “No thanks.”

That’s a good thing, even if we had to go through a little embarrassment to get to this point. A Sonoran Desert native like that cactus never belonged on a truck to Amazon headquarters, doomed to die there or maybe on a return trip to Tucson.

Now the saguaro will stay in its desert home. But the reason? That’s telling: It’s staying because it was an unwelcome sort of gift, the wrong kind of incentive in today’s economic development game.

As you’ll recall, our economic-development representatives at Sun Corridor Inc. came up with the gimmick last week. It was an attention-getting effort, announced Wednesday, in our quest to land a massive Amazon headquarters project.

The company is projecting that the new headquarters will employ up to 50,000 people, with compensation of around $100,000 per employee per year.

On Friday, I panned Sun Corridor’s effort as too ambitious, arguing Tucson doesn’t meet the criteria and just isn’t up to landing a project as coveted as Amazon anyway. Since 2013, I’ve been arguing that if Tucson wants to land more big companies, most of all we need to work on ourselves — the schools, transportation system and crime. We’re working on those.

But in the meantime, we’re fishing for lunkers with a cane pole and an inch worm. And a cactus. Since last Wednesday’s announcement, the saguaro has stayed put, packed for a trip but waiting in the nursery yard on West Prince Road, where the press conference took place. It was still there Tuesday. “Paperwork” issues delayed departure, Sun Corridor spokeswoman Laura Shaw said in the interim.

Finally, Amazon ended the strange chapter on Tuesday. The company said via Twitter, “ThxSunCorridorInc! Unfortunately we can’t accept gifts (even really cool ones) so we donated it to @DesertMuseum.”

In other words, they asked that the gift be re-gifted to the Arizona-Sonora Desert Museum before it was even delivered.

That felt like a pretty solid, if not unexpected, rejection.

But there is deep irony in Amazon saying “we can’t accept gifts.” Ha! What are they pretending this whole competition is about anyway?

Let’s take a look at their request for proposals under the heading “Key Preferences and Decision Drivers.” There, it says one of the key factors that candidate cities should highlight is “Incentives.”

So, the truth is that Amazon doesn’t want an incentive in the form of a 21-foot cactus, but it desperately does want tax breaks, free land, free electricity, job-training rebates, moving expenses, etc., etc., etc.

It’s like a kid who says she doesn’t want any birthday presents, but Amazon gift cards would be great!

That’s the way the economic-development game is played. We’ve won at it a couple of times lately — notably in winning a headquarters for Caterpillar’s surface mining division, in part through generous incentives offered by Rio Nuevo.

When a big company publicly announces a competition for a massive project — like the Amazon headquarters or the Tesla battery plant — that practically compels competitors to offer piles of corporate welfare just to be noticed.

Or, on the other hand, you can offer a 21-foot cactus.

This was, in retrospect, an ecologically insensitive gift idea. And it made Tucson look a little stupid.

But, I must admit this: It got noticed. For better or worse, that’s more than you’ll likely be able to say for the dozens of other cities vying for Amazon’s attention.

Steller's Friday Notebook: Saguaro or not, Amazon out of Tucson's league

Effort to recruit Amazon here is wasted, plus more on Stegeman, Brnovich and CD 2.

Hansen's Sunday Notebook: Cats' visit to UTEP a lesson in perspective — and a trip back in time

Amazon is re-gifting the 21-foot saguaro, which was set to go to its headquarters, to the Arizona-Sonora Desert Museum.