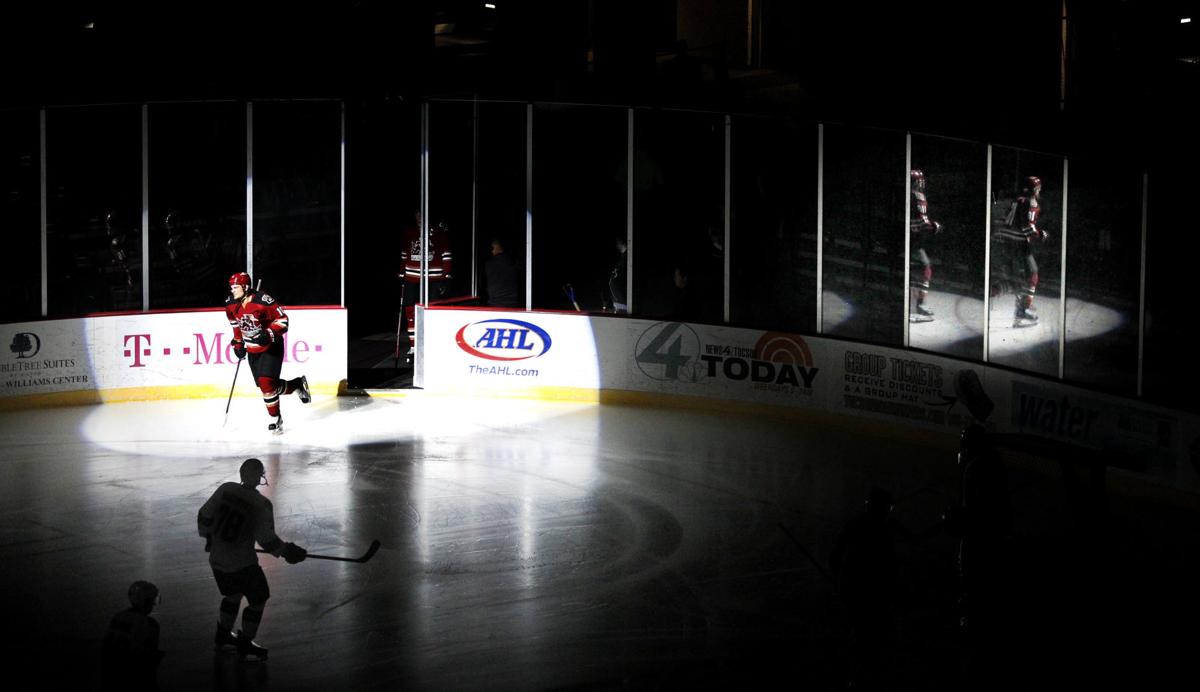 The Tucson Roadrunners are one of the new tenants at the Tucson Convention Center since the Rio Nuevo District put money into the TCC arena, says Rio Nuevo board Chairman Fletcher McCusker. The minor-league hockey team is in its fourth season at the TCC. 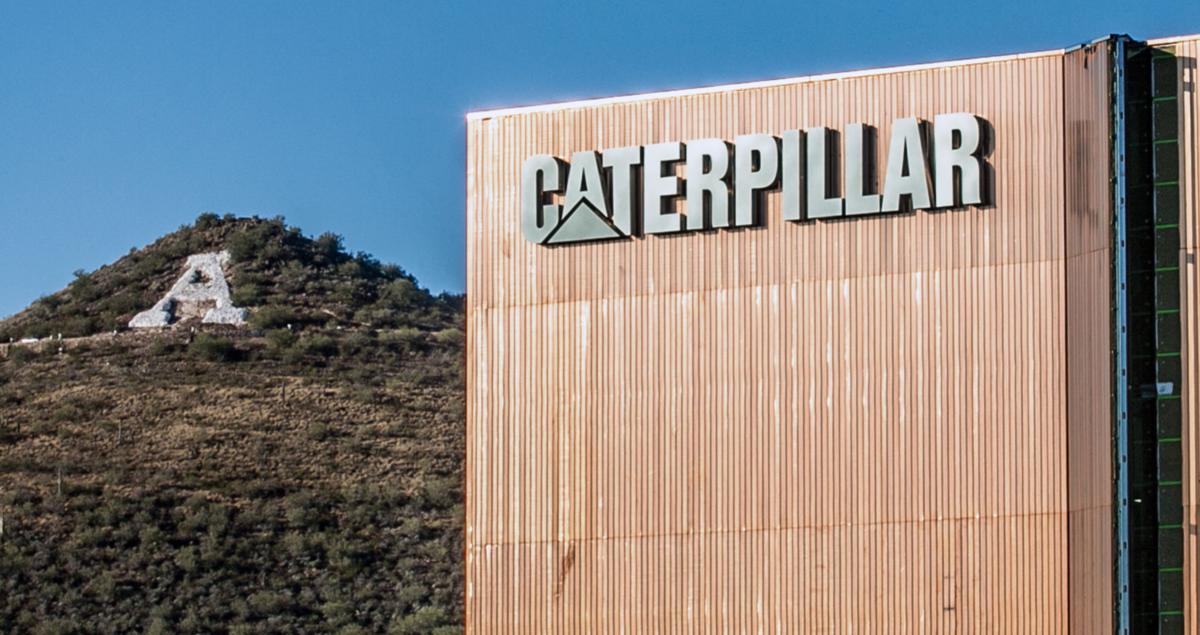 Rio Nuevo agreed to spend $52 million to clinch the deal to bring Caterpillar to downtown Tucson. 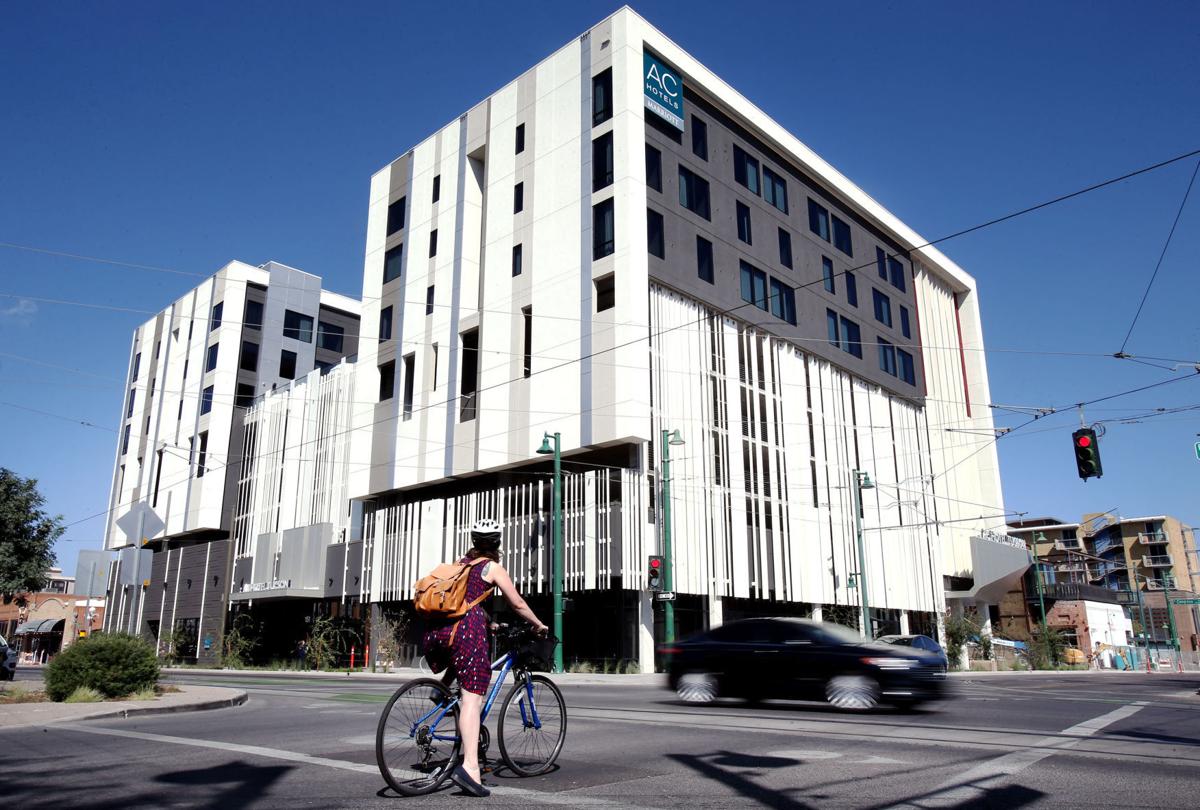 One of the successes for the Rio Nuevo District was relocating the Greyhound bus terminal to make way for the AC Marriott Hotel, above. It was the first new downtown hotel in decades.

Twenty years after its inception, the once-beleaguered Rio Nuevo District is earning praise for its progress on projects in downtown Tucson and financial prudence.

A recent audit, commissioned by the Arizona auditor general, characterized Rio Nuevo’s turnaround as “truly exceptional” and even challenged the district to spend more money on improvements to the Tucson Convention Center.

“Rio Nuevo is one of the most effective tax increment finance programs we have analyzed, nationally,” said Charles Johnson, president of auditing firm Johnson Consulting.

Contrast that to 10 years ago when Rio Nuevo was involved in multimillion-dollar lawsuits with the city of Tucson, which at the time had oversight of the district, and Rio Nuevo was being investigated by state and federal authorities regarding unaccounted for money and stalled projects.

“The first 10 years, we refer to as the lost years,” said current board Chairman Fletcher McCusker, who was appointed to the board in 2012.

“We thought about changing our name,” he said. “Then we realized we would always be known as ‘the organization formerly known as Rio Nuevo.’

“Instead, we decided to change our reputation.”

Created in 1999 via voter-approved Proposition 400, the Rio Nuevo District is a municipal tax collection district and special taxing district.

Rio Nuevo receives an incremental portion of state-shared funds from sales taxes collected within a defined boundary. The district boundaries are downtown Tucson, west to a panhandle just west of Interstate 10 and east to Park Place mall, along Broadway.

Known as a TIF (Tax Increment Financing), the special finance mechanism is used by the state to fund improvement projects.

When the Rio Nuevo District was formed, the Tucson Convention Center was designated as a priority of funding to bring it up to a nationally competitive level.

“This did not occur in the initial 10 years of the district and the district was off-mission,” auditors said. “Additionally, the estimated cost of each project was significantly underestimated which, in many cases, resulted in the projects being canceled or delayed.”

By 2009, the state determined the TCC had not received any significant enhancements and seized control of Rio Nuevo from the city of Tucson. A new board was appointed by the governor, president of the senate and speaker of the house.

“PUTTING THE PIECES TOGETHER”

McCusker recalls the confusion new board members faced as they tried to unravel what the previous board had done for the past decade.

“They had invested money that you really couldn’t find, so we spent a lot of time doing forensic accounting,” he said. “They had no idea who had paid and who hadn’t paid their sales tax.”

The first order of business was to hire a chief financial officer, which the previous board did not have, and conduct an audit.

“We started putting the pieces together,” McCusker said. “Then we put money into the TCC arena which brought in concerts, boxing matches, the (Roadrunners) hockey team and (Sugar Skulls) indoor football team.”

When the board announced it was prepared to engage in partnerships with the private sector, it was inundated with offers from developers.

Relocating the Greyhound Bus terminal to make way for the AC Marriott hotel — the first new downtown hotel in decades — was an early hit.

“But the true game-changer for us was landing Caterpillar,” McCusker said of the company choosing Tucson as the site for its surface mining division in 2016.

Rio Nuevo agreed to spend $52 million to clinch the deal and build the new headquarters west of Interstate 10, on Cushing Street. The district agreed to a 25-year lease with Caterpillar with the option for the company to buy the building at the end of the lease.

“Those are not the things that Tucson typically wins,” McCusker said.

Tucson attorney Keri Silvyn was briefly one of the board’s first general counsels.

“We spent a lot of time teaching them how to run a public board and figuring out who owned what and who invested in what and whether they were complying with open meeting laws,” she said. “It was a very difficult time and it wasn’t fun.”

“It was about seven years ago that I started saying, ‘They kinda know what they’re doing now,’” she said. “The current board did a lot of educating with their retail customers about coding so that sales taxes went to the district.”

Previously, some retailers within the district were simply miscoding their taxes and money wasn’t being earmarked for the district.

“Once the revenue started coming in, then they really started figuring out where they could invest,” Silvyn said. “They let the private sector know what they have to bring to the table and they’re not shy about saying, ‘No, this isn’t going to work.’”

She credits McCusker and former Mayor Jonathan Rothschild, who took office in 2012 and helped settle the lawsuits between Rio Nuevo and the city in 2013.

“There was a different chairman and a different mayor keeping the community at the forefront,” Silvyn said. “Hats off to them.”

McCusker, too, gives credit to Rothschild, City Manager Mike Ortega and Councilman Steve Kozachik, whose Ward 6 represents most of the Rio Nuevo District.

COMING INTO ITS OWN

Along with the “big hit” projects, Rio Nuevo has partnered with the private sector to get restaurants, bars, hotels and retail projects going.

Two new hotels are under construction downtown and two others will be undergoing renovations.

A new temporary ice rink has attracted large crowds this winter and downtown’s streets are filled with activity, concerts and often throngs of people on the weekends.

Auditors noted there is danger of the board being too conservative for fear of missteps and not bringing the TCC up to nationally recognized performance and design standards.

“The district can continue to make smaller investments, making the TCC better and making the broader downtown a better environment,” auditors said. “These investments alone make Tucson more competitive, but until the two biggest issues facing the district are addressed — the absence of a competitive hotel supply and competitive design standards — market penetration of the convention and trade show market will continue to be hampered.”

Rio Nuevo District has already committed to $65 million in improvements to the TCC, which include upgrades to the main convention complex, the Tucson Arena, the Leo Rich Theater, the Tucson Music Hall, and Eckbo plaza and fountain.

“The success of the district over the past few years indicates that there is merit in its existence and efforts to cause improvements in the district in support of the TCC,” auditors said. “A comprehensive plan should be developed outlining the most critical improvements needed for a successful TCC, and the associated costs, so a long-term plan of action can be developed and implemented.”

Retailers continue to flock to The Landing shopping center on Irvington Road and I-19.

City appears to be preparing legal challenge over requirement to move elections to even-numbered years.

As big tech continues its growth, Latinos feel left behind

The tech industry is growing in Arizona and nationally, with net employment in 2018 bringing on more than 260,000 new jobs nationally.

Hibbett Sports will open in the Spectrum shopping center, on Irvington Road and Interstate 19.

The Tucson Roadrunners are one of the new tenants at the Tucson Convention Center since the Rio Nuevo District put money into the TCC arena, says Rio Nuevo board Chairman Fletcher McCusker. The minor-league hockey team is in its fourth season at the TCC.

Rio Nuevo agreed to spend $52 million to clinch the deal to bring Caterpillar to downtown Tucson.

One of the successes for the Rio Nuevo District was relocating the Greyhound bus terminal to make way for the AC Marriott Hotel, above. It was the first new downtown hotel in decades.