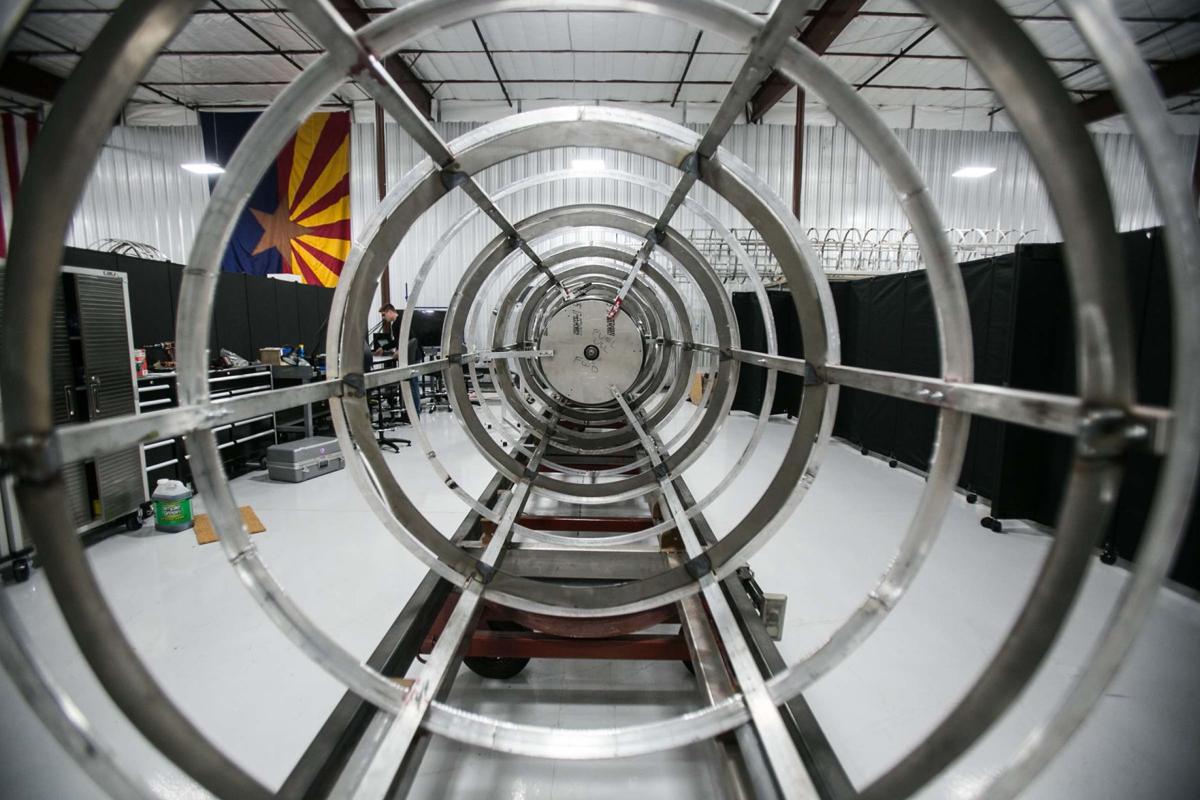 Vector Launch developed rockets at a facility south of downtown. 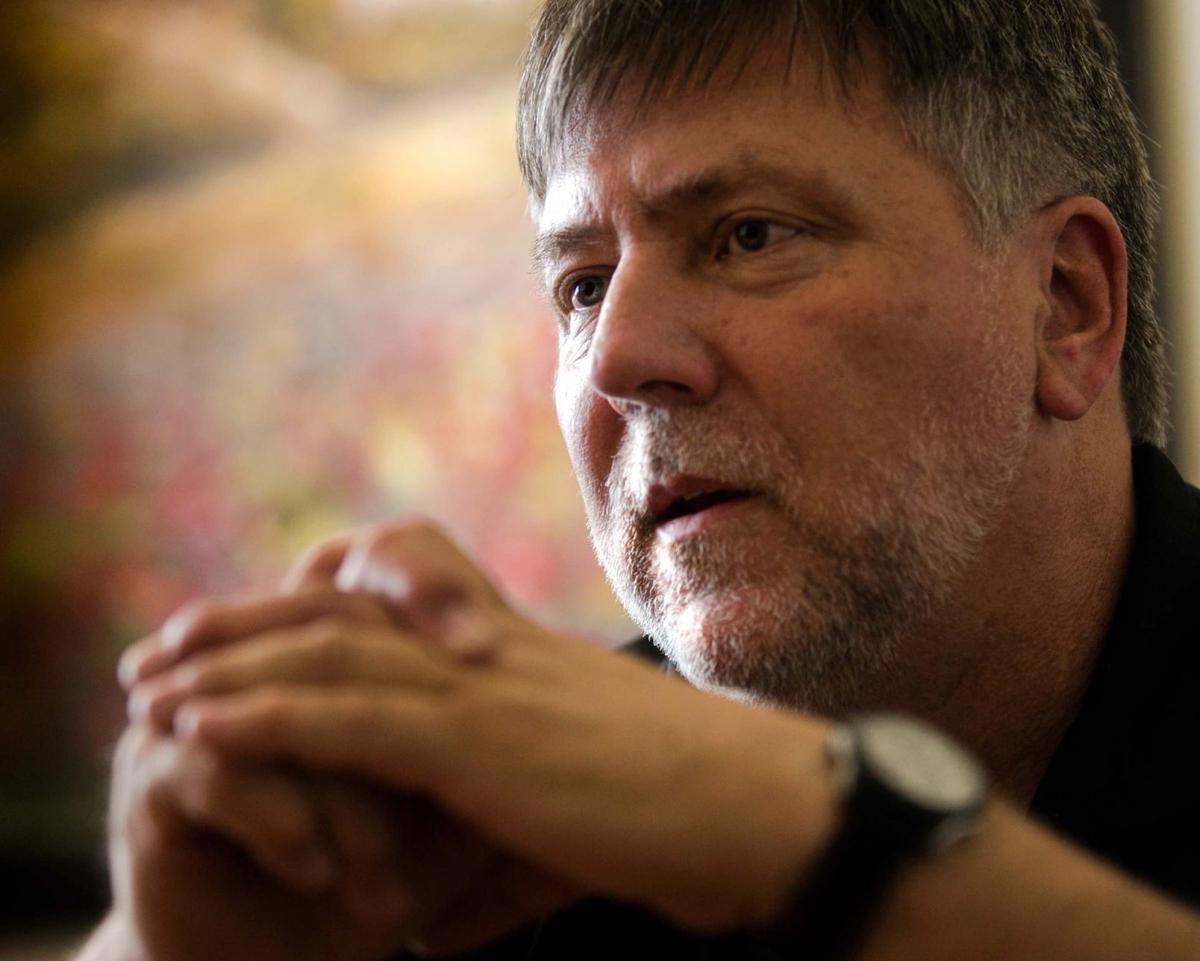 “There’s been a lot of quiet progress,” says Jim Cantrell, the co-founder and CEO of space-rocket company Vector Launch. 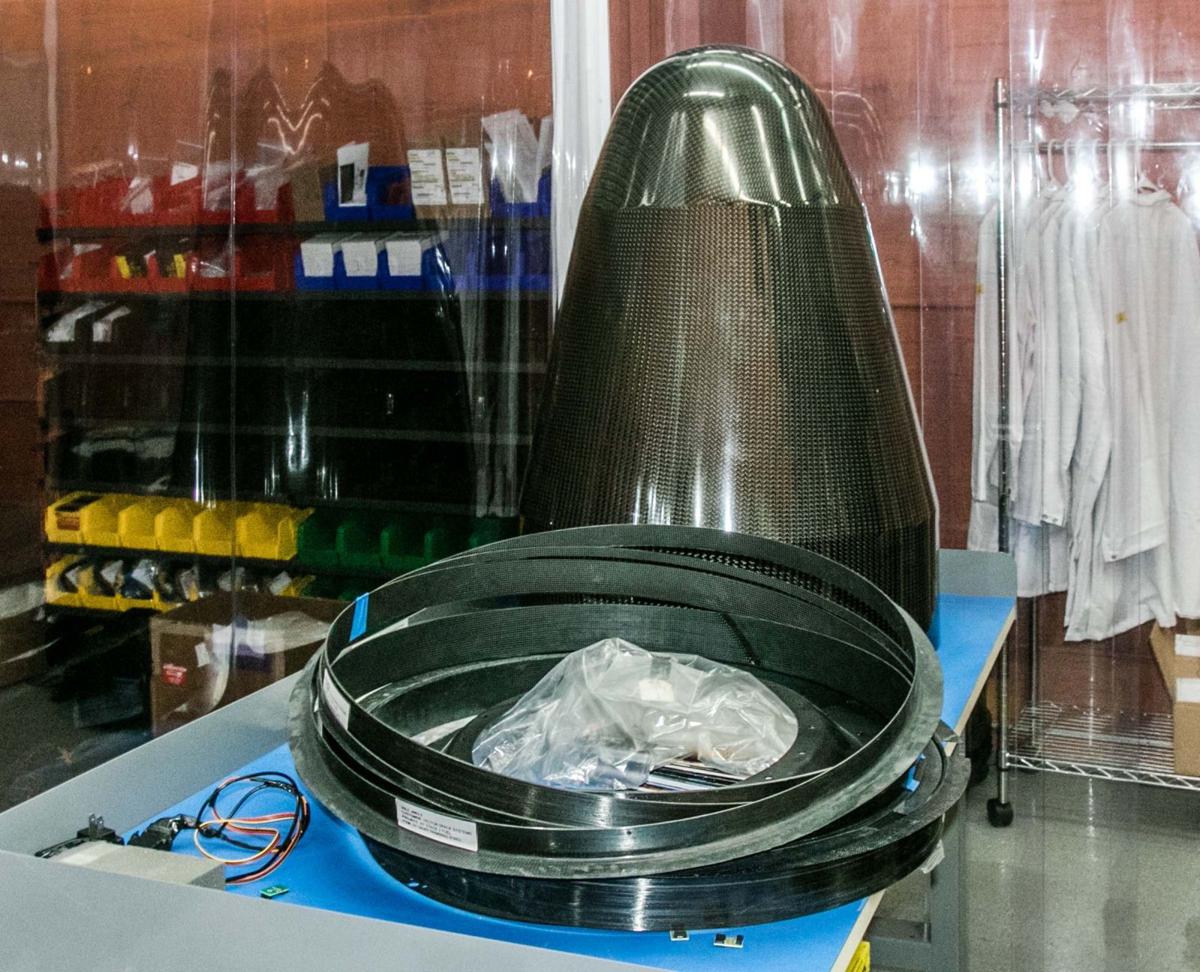 A rocket nose cone and interstage rings sit in a workshop at Vector Launch’s manufacturing facility near downtown. 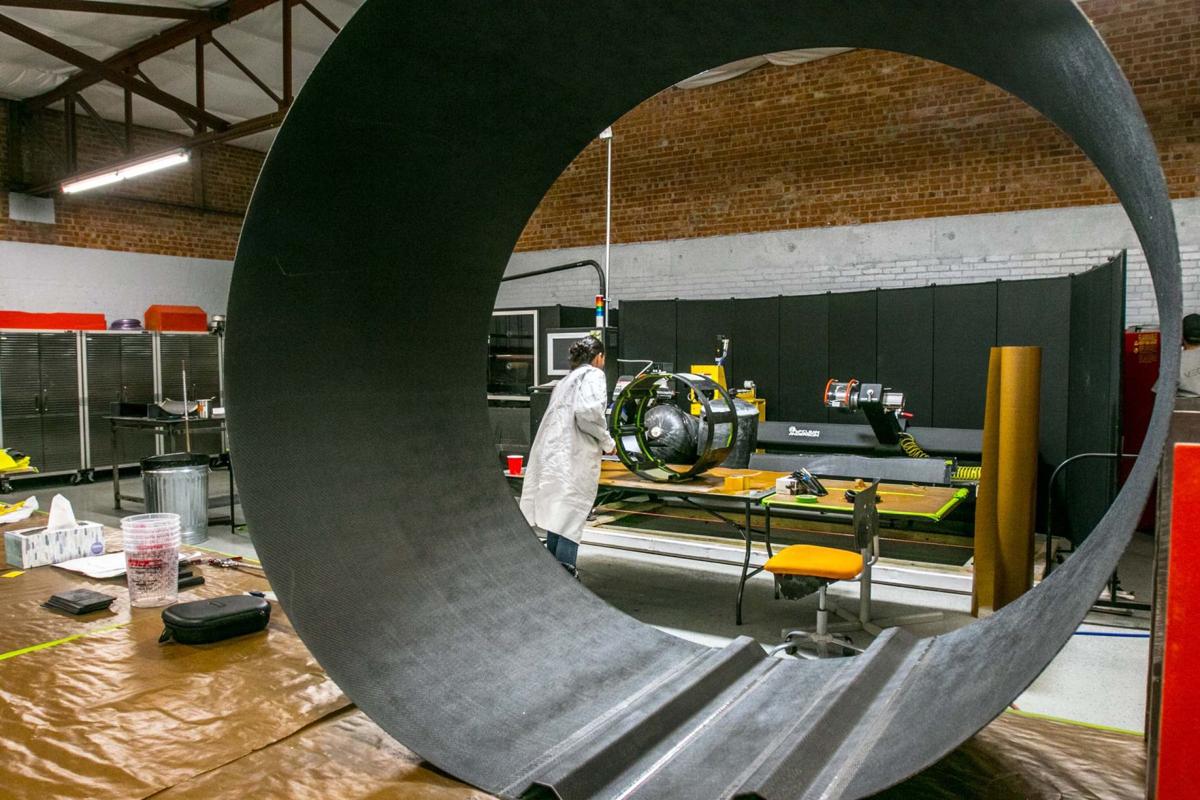 One Vector Launch employee says, “... they let us break things without hitting us on the back of the head too often.”

The media-savvy Cantrell has been popping up on TV and other media outlets to talk about the company as it works toward its goal of launching mini-satellites into orbit later this year.

Cantrell — a co-founder of SpaceX who is considered an expert on the fast-growing commercial space industry — says good publicity is important, but it’s time for action.

“It’s always important to have positive press, but we’re kind of living on good deeds more than good press these days,” he said in an interview at Vector’s headquarters near downtown.

Though Vector has successfully launched several suborbital flights, the company’s biggest test to date will come sometime in October, when it plans to launch its first orbital flight from a range in Alaska.

That flight will carry a customer satellite payload on a Vector-R rocket, which for the first time will be steered by thrust-vector control — essentially by shifting the position of the rocket-engine nozzles.

“Up to this point we’ve been flying these things with training wheels — the little fins on the back are our training wheels that keep the rocket aligned,” he said. “So we’ll take those off and the rocket could do loop-de-loops, but that’s the basis of the test.”

Actually Vector’s been doing a lot more than talking.

The company has been busy hiring staff, building out production facilities, perfecting its rocket technologies and planning construction of a new, 100,000-square foot rocket factory near Tucson International Airport.

Inside the company’s headquarters in a nondescript industrial building on East 16th Street, office suites open into technical areas where engineers build carbon-fiber parts such as rocket nose cones and work to design satellite-deployment systems.

Around the corner at a high-bay industrial building on South Toole Avenue, teams of engineers work to design, fabricate and assemble the company’s Vector-R rocket and its larger cousin, the Vector-H.

Looking to fill an unmet need for launch vehicles for a new generation of small satellites, Vector is offering to fly and deploy mini-satellites for less than $3 million per launch – a fraction of the cost of launching on a bigger rocket like SpaceX’s Falcon 9.

Though mini-sat operators can hitch a ride on bigger rockets — an arrangement know as ridesharing — limited space has created an annual backlog of hundreds of satellites.

Vector is initially planning 100 launches a year, but could triple that down the road if it can ramp up production, said Cantrell, whose 30-year space career includes a stint with France’s space agency and 18 years as a space consultant.

Demand is not a problem.

Cantrell said the company is approaching 400 launches under contract, with some customers discussing long-term deals for several hundred launches.

“We’ve got lots of customers — as a matter of fact, we can sell every launch vehicle we can build and fly, so the real challenge for us is to ramp us as quickly as we can and faster than our competition,” he said.

The company can’t name many of its customers, under pending confidentiality agreements, but publicly announced customers include Scotland-based Alba Orbital, which will launch two of its PocketQube satellites during the first Vector-R orbital flight scheduled for October.

Others announced customers include Iceye, a Finnish company that has contracted for 21 launches for its platform of small radar-imagery satellites; Open Cosmos, an England-based space mission provider, which has reserved five orbital launches between 2019 and 2023; and California-based Astro Digital, which plans to use Vector to launch at least a dozen of its land-imaging satellites as part of a larger constellation.

The company also has a company co-founded by Cantrell’s son that plans to launch a cryptocurrency on a Vector space software platform.

Besides commercial customers, Vector has been working with government satellite operators, and the company recently marked two years of research on launch vehicle technology for the U.S. military under contract with the Defense Advanced Research Projects Agency, or DARPA.

With all the demand for its services, Vector has been engaged in its own space race to beat competitors to orbital launches.

Cantrell reckons there are some 80 small-sat launch startups, but only a few have tested rockets and one, Rocket Lab, has reached orbital flight.

Founded in New Zealand, Rocket Lab moved to Los Angeles in 2013 and launched its first orbital flight from New Zealand in January, with its first fully commercial flight tentatively planned for later this month.

But Cantrell, who has consulted for Rocket Lab as well as other space-launch startups, said he still considers the rideshare services to be Vector’s main competition, noting that his company’s larger Vector-H launch vehicle, still in development, will eventually compete head-to-head with Rocket Lab’s larger Electron rockets.

To meet customer demand, Vector is expanding on all fronts, including hiring, rocket development and facilities.

Founded in 2016, the company now has about 130 employees, with about half in Tucson and the rest in an engineering office in Los Alamitos, California.

Cantrell said he expects Vector to reach about 200 employees by the end of this year, with most of that growth coming in Tucson.

The company is still staffing up its Toole Avenue facility and will soon double its space there after leasing the other half of the roughly 45,000-square-foot building.

One of several University of Arizona alumni Vector has hired, Jeremy Harrington has recently been working on launch-structure assemblies at the Toole site.

“It’s been awesome to work here,” Harrington said. “They love giving us a lot of responsibility here, even though we’re really young. We learn by breaking things a lot, but they let us break things without hitting us on the back of the head too often.”

In the current, newly renovated space, engineers work at computer workstations overlooking a factory floor where workers are building a Vector-R and a “transporter erector launcher” — a portable rocket carrier and launcher that can be set up for a launch hours after arrival.

Along one wall, the recovered fuselage skin of one of Vector’s early rocket prototypes overlooks part of the future Vector — huge wooden boxes containing a metal 3-D printer recently arrived from Germany.

Vector already has used 3-D printed fuel injectors on its rocket engines, and the new system, which cost about $1 million, will allow the company to produce such parts as needed, Cantrell said.

Vector’s new plant near the airport, still in the design and permitting stage, will allow the company to make most of its own parts, he said.

The new airport plant will be laid out in assembly line fashion, with components arriving by truck at one end and moving through two stage-assembly lines before being shipped out at the other end.

Cantrell said the company is still raising venture capital to get into full production and is working on a new round of funding.

The company has raised about $50 million from venture capital and angel investors, but the founders together still hold a majority share and employees share ownership, he said.

Angel investors in Tucson and Phoenix were key providers of early seed money and have invested about $6 million overall in the company, Cantrell said.

“We’ve kind of gone from the startup phase to the grow-up phase,” he said.

Luke Sorensen’s journey so far has taken him from an orphanage in Xi’an, China, to a large, loving family in Tucson — and now to Harvard University.

Sorry to rain on everyone's parade but it's too early for the chubascos.

These two Tucson men gave up their careers to become priests

The Diocese of Tucson is ordaining two new priests.

Soldier from Arizona dies, 3 others wounded, in Somalia attack

MOGADISHU, Somalia — Four U.S. service members who were wounded in an extremist attack in Somalia that killed one special operations soldier h…

The new investment will help fund development of the company's rockets to launch small satellites into space.

Tucson-based Vector Launch is one of three companies chosen by DARPA to demo how they can rapidly launch small payloads into space.

Vector Launch developed rockets at a facility south of downtown.

“There’s been a lot of quiet progress,” says Jim Cantrell, the co-founder and CEO of space-rocket company Vector Launch.

A rocket nose cone and interstage rings sit in a workshop at Vector Launch’s manufacturing facility near downtown.

One Vector Launch employee says, “... they let us break things without hitting us on the back of the head too often.”