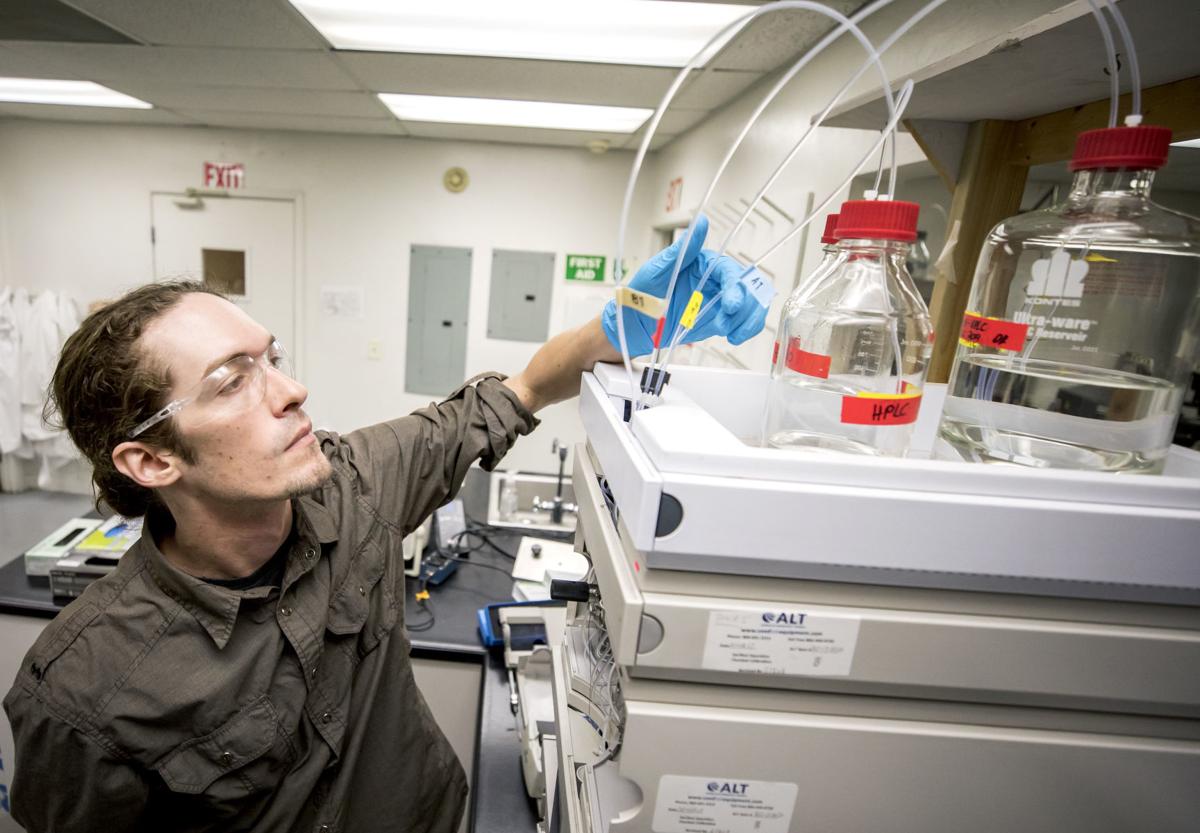 Dylan Hanrahan, chemist at NuvOx and UA grad student, works with a High-Performance Liquid Chromatography system in NuvOx Pharma’s lab, 1635 E. 18th St. HPLC systems are used to separate and analyze chemical compounds in a mixture to check the purity. 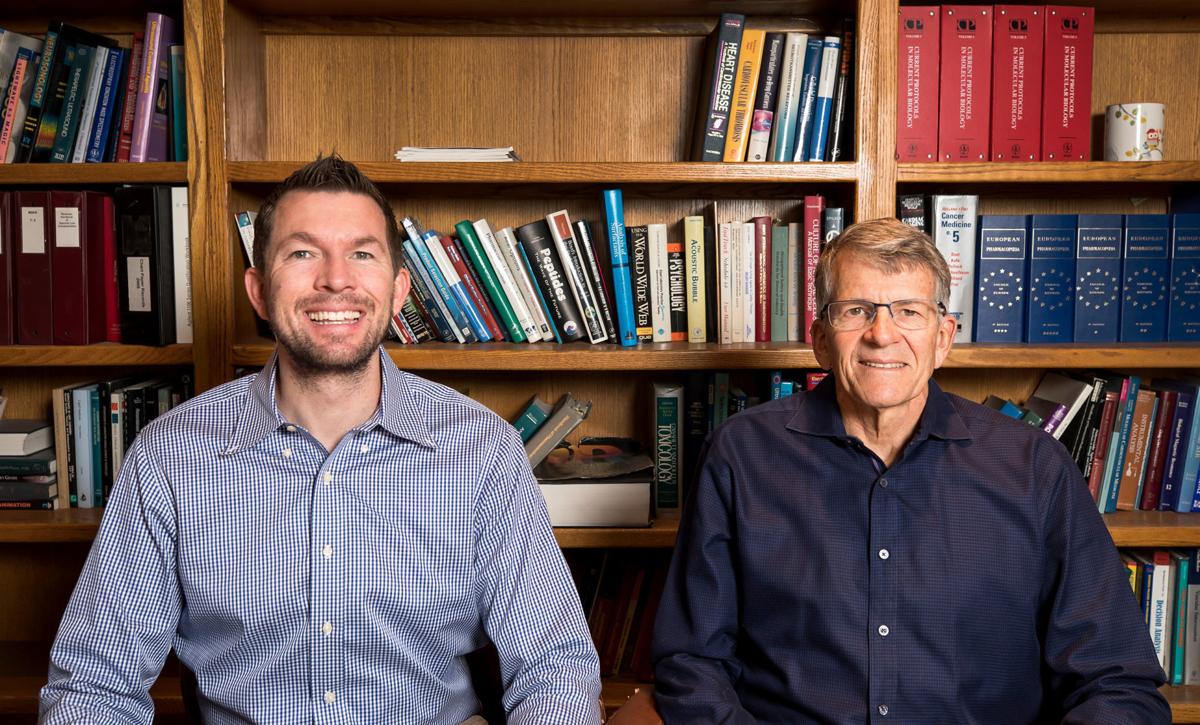 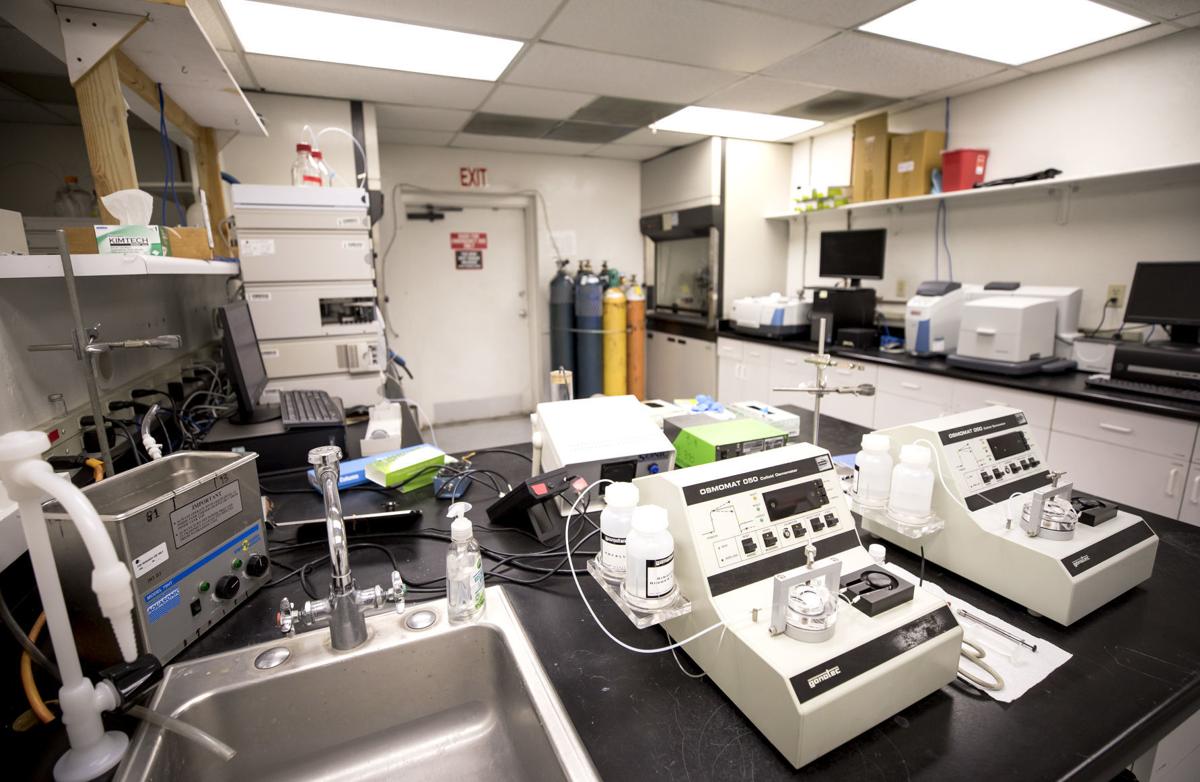 The NuvOx Pharma lab is at 1635 E. 18th St. It took several months to get a city building permit for an addition, since the 1960s-vintage building never had a development plan.

A Tucson startup founded by a longtime University of Arizona radiologist is expanding — with plans to launch commercial-scale drug manufacturing operations here within a few years.

Now, the company is breaking ground on an 1,800-square-foot addition to its longtime headquarters near downtown to house a modular clean room manufacturing facility.

The clean room will make drugs for NuvOx, which is in mid-stage clinical trials with drugs to treat brain tumors and strokes, as well as manufacture for Microvascular Therapeutics, a company formed in 2009 by Unger and his son, UA assistant radiology professor Dr. Wyatt Unger.

“I think we’re the only one manufacturing drugs for clinical trials, and if we’re successful and FDA approves it, we’ll be the only one in Southern Arizona” making drugs commercially, Evan Unger said.

Founded in 2008, NuvOx is focused on therapeutic delivery of oxygen based on patented technology for gas “microbubbles” originally developed as an ultrasound imaging contrast agent.

The company is in a Phase II clinical trial for brain cancer, with a drug that can deliver oxygen to tumors to make them more vulnerable to radiation treatment, as well as a Phase II trial for a related drug to treat ischemic stroke.

Microvascular Therapeutics, led by Wyatt Unger as CEO, was formed to further develop gas microbubble technology for imaging applications as well as for potential therapies.

The company is working to develop an improved version of Definity, a contrast agent the elder Unger developed in the 1990s and sold to chemicals giant DuPont in 1999 for about $40 million.

Definity, launched in 2001 and approved for ultrasound imaging of the heart, is now the most prescribed drug of its kind in the U.S., according to Massachusetts-based Lantheus Medical Imaging, which markets the product.

In 2018, Microvascular Therapeutics won a $1.7 million grant from the National Institutes of Health to develop its initial drug, called MVT-100.

The company is in the process of launching a Phase I clinical trial to gauge the new contrast agent’s safety and effectiveness when used for echocardiograms — ultrasound imaging of the heart — compared with the use of Definity.

Wyatt Unger, who got his medical degree in radiology as well as an MBA from the UA, said that unlike Definity, which must be refrigerated, the company’s new contrast agent can be stored at room temperature, and it may have fewer side effects than Definity.

Microvascular Therapeutics’ MVT-100 has qualified for a U.S. Food and Drug Administration program that expedites the approval process for drugs substantially similar to existing, approved drugs.

The 32-patient, Phase I clinical trial is being conducted at the UA Banner-University Medical Center and will soon include the University of Nebraska Medical Center under direction of cardiologist Dr. Thomas Porter, a noted expert on heart imaging, Wyatt Unger said.

If all goes well, he said, the trial will be completed by this spring and after follow-up trials, the company hopes to win federal market approval by mid-2022.

“We’d like to manufacture it here,” Wyatt Unger said. “If everything goes according to plan, we could be making a million units a year out of the modular facility.”

Aided by nearly $5 million in NIH grants, Microvascular Therapeutics also is in preclinical studies of related drugs for use with ultrasound to break up blood clots, for detection of pancreatic and breast cancer and for detection and treatment of eye disorders.

The company is in the process of raising its first round of venture capital for further studies, Wyatt Unger said.

“We are pretty far along with talks with some interested investor groups as well as some strategic partners,” he said.

NuvOx also is in fundraising and partnering mode, Evan Unger said, noting the company is looking to raise about $15 million in venture capital to fund advanced clinical trials that could lead to FDA drug approvals in a few years.

Though NuvOx has seen promising test results so far, there’s no guarantee it will succeed — another company Evan Unger formed to use a microbubble-based drug to treat strokes in combination with another drug failed in 2009 after some trial patients developed serious bleeding.

NuvOx has 17 employees, including some who also work for Microvascular Therapeutics and a few executives who work remotely, and many of its employees are UA alumni.

Kaitlin Graham joined NuvOx as a research chemist in 2016 after earning her bachelor’s and master’s degrees in biomedical engineering from the UA. She is now regulatory program manager for the company.

Originally from Tucson, Graham said she was glad to find a rewarding, challenging job close to home.

“I really like the kind of small-company life,” she said. “We’re able to do a lot of different things; I’ve learned a lot on the regulatory side, grants, business — it’s a really cool experience to work here.”

Graham will have her hands full as NuvOx vies for FDA approval of its new production addition, and the company has hired consultants and key employees to handle quality control.

“One of the key things is, you have to have a very robust quality assurance program,” Evan Unger said, citing rigid FDA requirements for drug production facilities.

The new addition will be mostly occupied by a 1,500-square-foot, modular top-level clean room for drug manufacturing, with controlled access and super-filtered ventilation.

The modular setup has been used by other drugmakers, hopefully speeding up the FDA approval process.

It took several months to get a city building permit for the addition, since the 1960s-vintage Spanish Revival building on East 18th Street the company has occupied since the 1990s never had a development plan, Evan Unger said.

The shell of the addition is expected to be completed within about a month.

The company’s goal is to manufacture drugs for late-stage, Phase III trials — typically the last studies before an approval decision — and for commercial sale of approved drugs.

“That’s our goal, but it’s going to be a tall order,” Evan Unger said.

The annual bowl game's charitable and economic impact are impressive.

A new report from the Arizona Department of Insurance can help you narrow down your options before calling and clicking around to find the best rate.

Pack your bags, Mount Lemmon is getting a new hotel development

University of Arizona alums Justin and Andrea Hafner are building a hotel development atop the mountain that will feature 17 cabin rooms for rent.

Dylan Hanrahan, chemist at NuvOx and UA grad student, works with a High-Performance Liquid Chromatography system in NuvOx Pharma’s lab, 1635 E. 18th St. HPLC systems are used to separate and analyze chemical compounds in a mixture to check the purity.

The NuvOx Pharma lab is at 1635 E. 18th St. It took several months to get a city building permit for an addition, since the 1960s-vintage building never had a development plan.