Read Today's E-Edition
Share This
These Tucson spots will feed your hunger for gems, minerals
Share this
Gerald M. Gay

Long before its designation as a UNESCO City of Gastronomy, Tucson was a town that loved to rock ... or at least loved its rocks.

Since the first Tucson Gem and Mineral Show in 1955, put on by the Tucson Gem & Mineral Society, millions of people from around the world have flocked to the Old Pueblo to attend what has evolved into 40 different shows, known as the Tucson Gem, Mineral & Fossil Showcase.

Like the foodies who come to town for the meals that help define us as a city, visitors to the Gem, Mineral & Fossil Showcase hunger for the things that will tantalize their senses.

More often than not, Tucson delivers a smorgasbord of options, from stone meteorites to megalodon teeth to exotic diamonds, sapphires and rubies. Many of this year’s shows start this weekend, Thursday, Jan. 26, and run through Feb. 12.

No matter your taste, here are some choices for this year’s showcase.

Visitors and locals alike can whet their appetites before hitting the big shows with a visit to the University of Arizona’s Alfie Norville Gem & Mineral Museum at the Old Pima County Courthouse, 115 N. Church Ave.

The state-of-the-art museum opened in the summer of 2021, and has more than 3,000 specimens on display, including one of the largest quartz clusters ever mined in Arkansas, situated in the museum’s lobby.

It is open 10 a.m.-4 p.m. Tuesdays through Saturdays. Admission is $15 with discounts available. gemandmineralmuseum.arizona.edu

Treasure hunters can also get a taste of what’s to come at the Tanque Verde Swap Meet, 4100 S. Palo Verde Road. The swap on Tucson’s south side tends to attract out-of-town mineral dealers this time of year who have gravitated over from the gem show in Quartzsite, Arizona, as that show winds down.

Stop in toward the end of the showcase, Feb. 10-12, and you’ll be able to attend the grand opening weekend of Comida Park, the swap’s new food truck park, situated on the south end of the property.

Comida Park will be open seven days a week and will be free except during those times when the main swap is charging for entry. Its regular hours will be 8 a.m.-8 p.m. Mondays-Thursdays, 8 a.m.-11:30 p.m. Fridays-Saturdays and 8 a.m.-10 p.m. Sundays. Info: comidapark.com.

Those looking for more formal retail surroundings can drive down to Mineral Mile, a small strip of individually owned gem and mineral warehouses on North Main Avenue between downtown and West Grant Road, some of which are open year-round and some that are only open for the showcase.

Superb Minerals, at 1243 N. Main Ave., is a year-round operation but is putting on a bigger show, with thousands of specimens on display across 12,000 square feet of space, for the upcoming showcase.

The Pandey family has been running Superb Minerals, which specializes in zeolite minerals from India, on North Main since 2013, but they’ve been attending the showcase since 1994, son Kulin Pandey said.

“It is the biggest show in the world,” Pandey said. “Tucson is the place for rocks and minerals. It was a good move for us.”

Pandey’s father first took up collecting minerals as a hobby while serving in the military in India.

“He realized it could be a good business for the family,” Pandey said.

Gradually, the Pandeys moved from selling minerals to local dealers to attending gem and mineral shows around the world, including the one in Tucson.

Today, Superb Minerals is one of the largest importers of zeolites in the world, eye-pleasing minerals found in pockets of ancient lava flows found in the quarries of the Indian state of Maharashtra.

Superb Minerals’ specimens range in size from zeolites that would fit comfortably on your window sill to ginormous pockets of minerals bigger than the loveseat in your living room.

“Those are museum pieces,” Pandey said of the larger displays.

“We want more people to enjoy pieces like these,” Pandey said. “Each piece is unique. It will never be repeated. No two pieces look the same.”

Pandey said that their business has shifted from 10% in online sales to a little more than 80% since the pandemic, but they still encourage their customers to come to Tucson for the showcase.

“It is the experience,” Padney said. “People from all over the world come here to buy and sell. One minute you are in Morocco. Five minutes later, you are in Brazil. You will see pieces from everywhere.”

All one needs to do is cruise the frontage road on either side of Interstate 10 near downtown this week to realize that a gem, mineral and fossil feast is about to commence, with blocks of hotel rooms converted into showrooms along the west side and long, white tents loading in crate after crate of precious cargo along the east.

That corridor between West 22nd Street and West Broadway is where the brunt of the action takes place.

It’s there you can find smaller shows like the African Art Village (tucne.ws/1met), near the MSA Annex at 279 S. Linda Ave., with its selection of masks, paintings, clothes, beads, jewelry and more from across the African continent. The Village offers free admission and is open from 8 a.m. to 6 p.m. Saturday, Jan. 28, to Feb. 12.

Another popular destination for the general public is the Kino Gem and Mineral Show (as-shows.com) at the Kino Sports Complex, 2500 E. Ajo Way. If you enjoy long leisurely walks while hunting for treasures, check this free show out, with its hundreds of dealers spread over 30 acres. But wear sensible shoes. This show runs 10 a.m.-6 p.m., Thursday, Jan. 26, through Feb. 12.

The original Tucson Gem & Mineral Show, the filet mignon of gem shows, will take place at the Tucson Convention Center, 260 S. Church Ave., from Feb. 9 to Feb. 12. The theme this year is “SILICA — Agates and Opals and Quartz, Oh My!”

“There was a lot of pent-up desire to get out and enjoy a good mineral show,” Megaw said via email.

Megaw said that they are expecting another strong showing this year, especially now that many of the gem and mineral show’s international participants are able to return again after years of travel restrictions.

In addition to the themed exhibits, Megaw said, you can expect to see six to eight of their biggest cases devoted to “probably the best exhibits ever assembled anywhere of single gem crystals.”

“Most crystals of this quality are cut up for gemstones,” he said. “But these escaped the cutting wheels and survive as colorful transparent crystals of extraordinary size and beauty. Picture your favorite gemstones as natural crystals the size of a soda can or a jug of milk.”

The show charges for entry, $13 general admission with children 14 and younger getting in for free. For that price, you get to explore rows of quality gem and mineral dealers, more than 250 in all, attend educational lectures and peruse through a variety of specimens on exhibition.

Now that you’ve filled your suitcases (if your visiting from out of town) and living rooms (if you are a local) with giant geodes, dinosaur bones and precious gems, it is time to enjoy the sweet extras that come along with attending the gem show in Tucson.

One way to let your hair down is by attending Gem & Jam, the showcase-adjacent music and arts festival, set to take place at the Pima County Fairgrounds, Feb. 3 to Feb. 5.

Gem & Jam is packing more than 40 acts into three days this year, covering a number of genres, including rock, indie, bluegrass, funk and soul, trip-hop and dubstep.

Longtime jam band The String Cheese Incident is set to headline the event.

Beyond that, the fest will feature visual stimulation in the form of light shows, interactive art installations and gem and mineral-related items for purchase.

General admission is $75 per day with discounts and packages available. For a full schedule and more information, visit gemandjamfestival.com.

While you are out and about during the gem show, you might as well take in all of the dining options that the city has to offer. Tucson is a UNESCO City of Gastronomy, after all.

If you are near downtown, you can bounce around to some of the newer eateries, places such as Nightjar (facebook.com/CoronetTucson), an offshoot of The Coronet at 347 S. Meyer Ave.; The Monica (themonicatucson.com), a Flores Family concept; or Blue Front (facebook.com/bluefronttucson), a new restaurant in the old Ten55 Brewing Co. location, 110 E. Congress, that serves a menu that includes burgers, shakes, meatloaf and other comfort foods.

The Foothills has its upscale fare; Wild Garlic Grill (wildgarlicgrill.com), 2870 E. Skyline Dr.; and Tavolino (tavolinoristorante.com), 2890 E. Skyline, among them. The south side has its traditional Mexican with Tacos Apson (tucne.ws/1mew), 3501 S. 12th Ave.; Mi Nidito (miniditorestaurant.com), 1813 S. Fourth Ave., and a long list of other establishments.

If you find yourself in midtown, visit the newly opened Borderlands Brewing Sam Hughes (facebook.com/borderlandsbrewing), 2500 E. Sixth St., for a quick pint and a tasty meal, with a menu from the mind of “Top Chef” alumna and local celebrity chef Maria Mazon.

Every winter thousands of visitors descend upon the Old Pueblo for the Tucson Gem, Mineral & Fossil Showcase. Vendors have been setting up…

More than 50 food vendors, wineries, breweries, distilleries and artisan food purveyors will be on hand at the Tucson Botanical Gardens for Savor Food & Wine Festival.

This Tucson-area restaurant now has a robot on staff

For Star subscribers: Watch "Spice" the hospitality robot help clean tables while you eat your samosas and tandoori chicken at this Oro Valley spot.

For Star subscribers: A popular food trailer, known for its creative hot dogs, will have a permanent spot on the patio of Dillinger Brewing's taproom.

For Star subscribers: Housed in the old Fired Pie, the new tapas spot will serve small plates to share, along with drinks.

For Star subscribers: The grab-and-go Mediterranean street food spot has been serving downtown's late-night crowd for the last six years.

As thousands roll into town for the Tucson Gem, Mineral & Fossil Showcase, venues are setting up across the Old Pueblo. 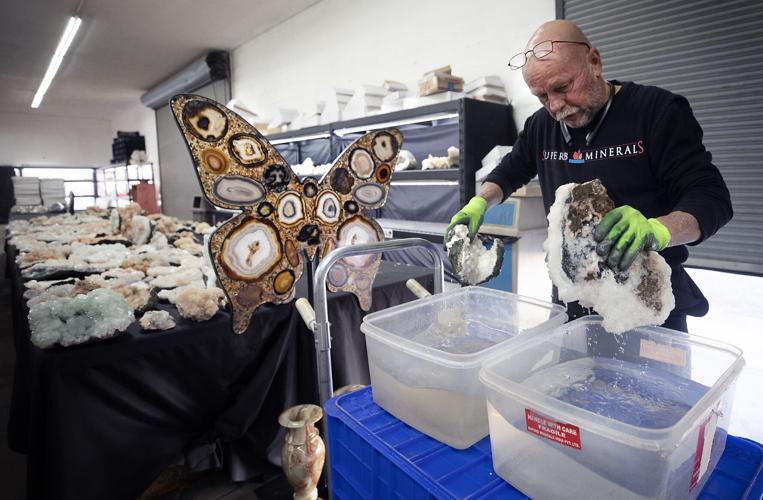 Chris Koury washes rocks at Superb Minerals, 1243 N. Main Ave. Superb Minerals is one of the largest importers of Indian zeolite in the world. They are open year-round but are preparing for the Gem and Mineral Show. 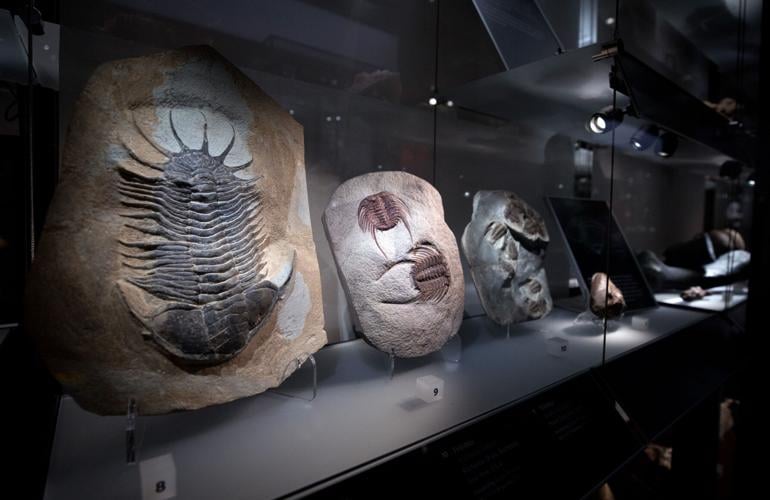 A trilobite, far left, on display with other fossils at the Alfie Norville Gem & Mineral Museum, inside the historic Pima County Courthouse. The museum is dedicated to the preservation of minerals and meteorites and to educate the public. 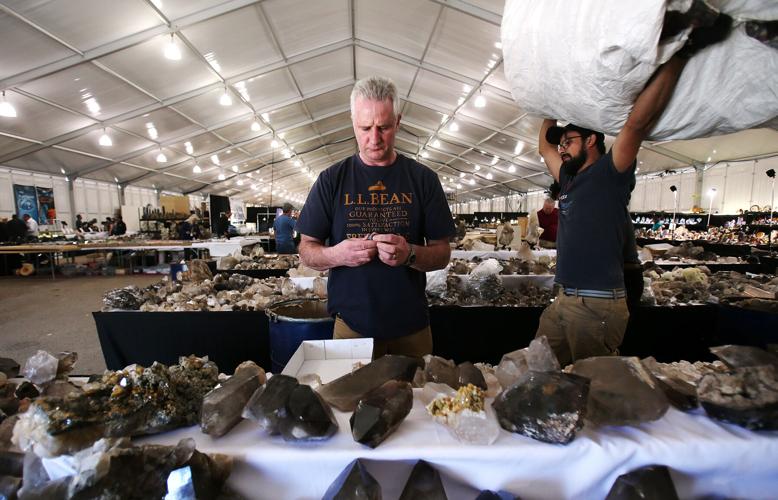 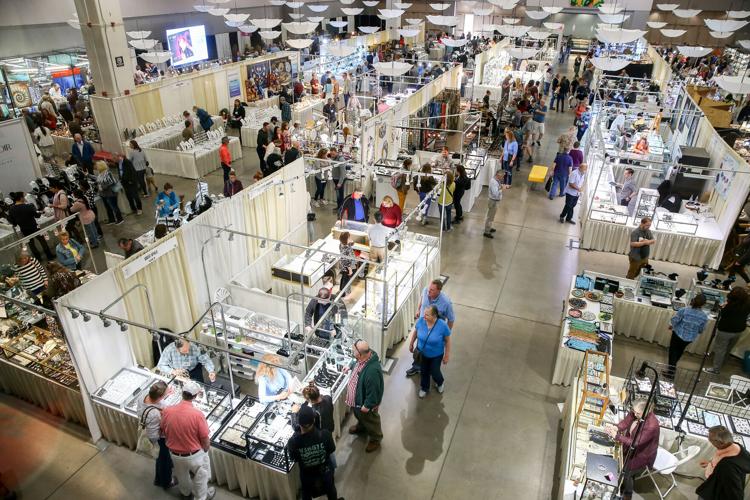 People wander through the Tucson Gem and Mineral Show inside the Tucson Convention Center in 2020. 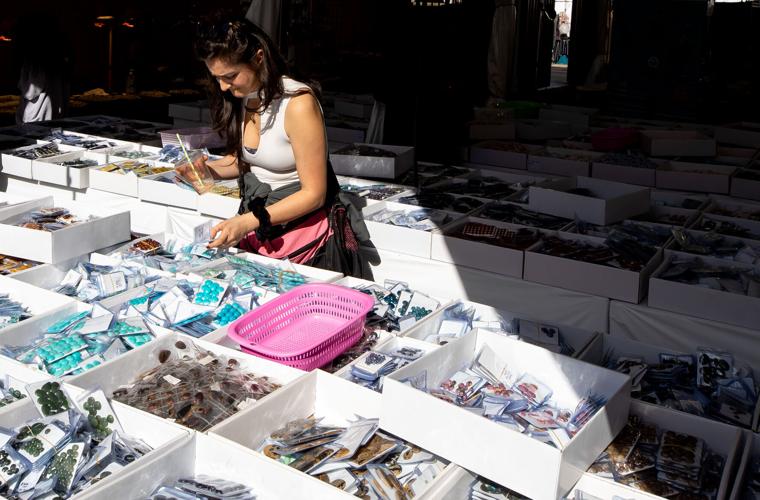 Erika Ciamares, jeweler and owner of ModernOpus, looks at gems from Arthur Gem and Jewelry Co. at the Pueblo Gem and Mineral Show, 777 W. Cushing St. 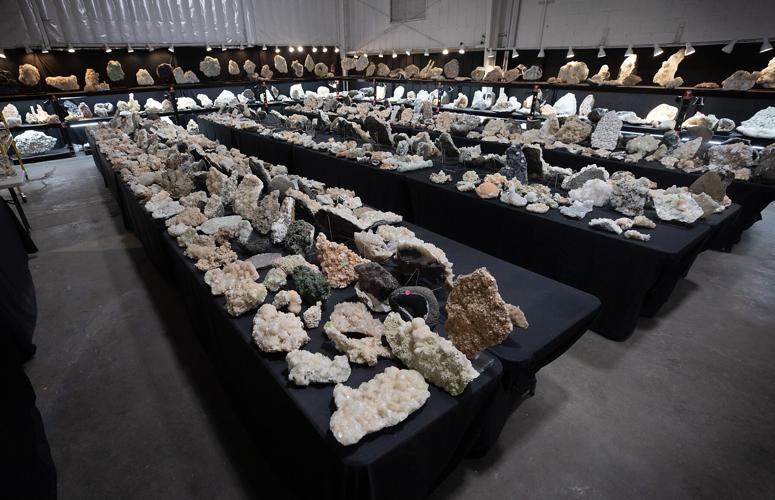 A variety of minerals are on display in one of the showrooms at Superb Minerals. The Pandey family has been running Superb Minerals since 2013, but they've been attending the Gem and Mineral showcase since 1994.