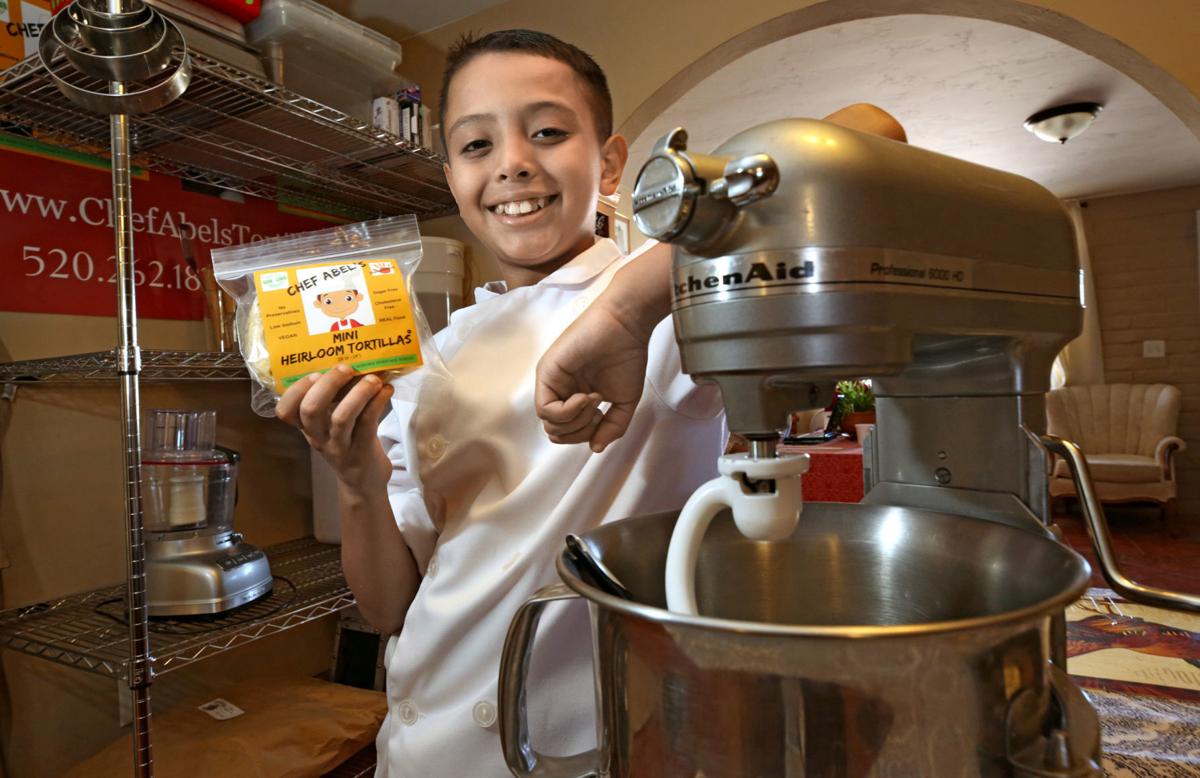 Chef Abel Ramos, 11, stands in the kitchen where he makes tortillas using a recipe from his great-great-grandmother. The tortillas are vegan, non-GMO, low sodium and sugar free. 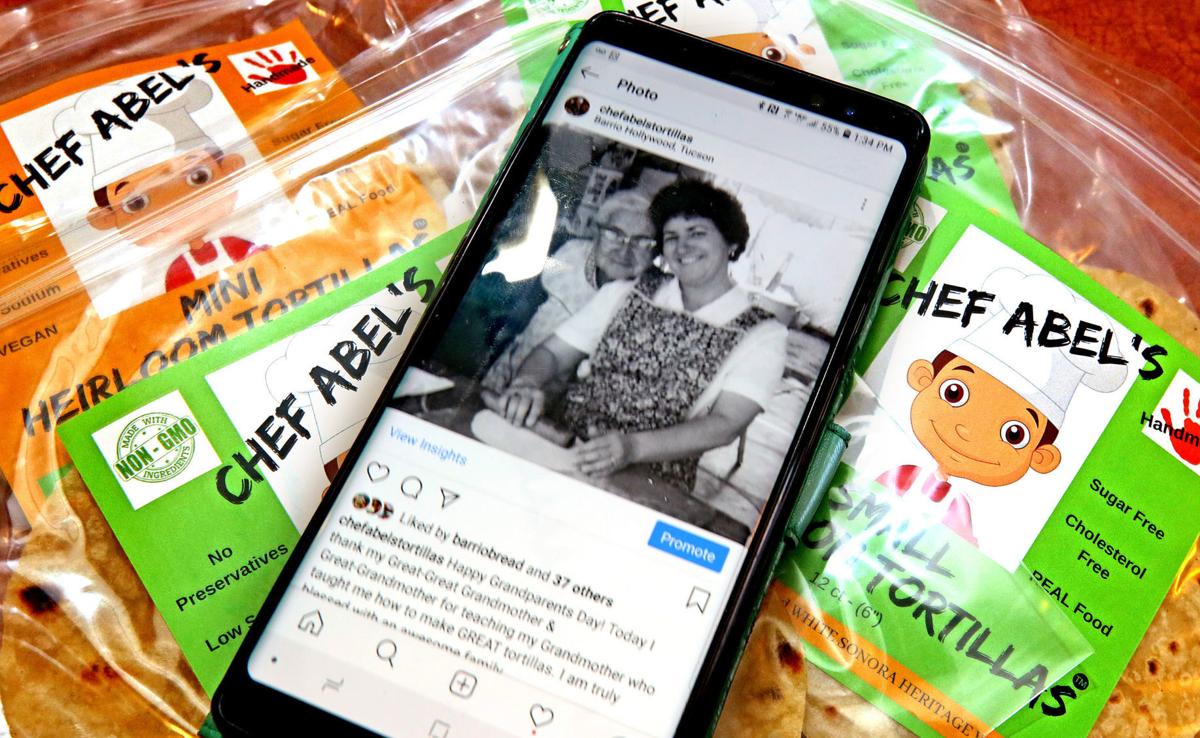 Chef Abel Ramos, 11, uses his family’s recipe and techniques that have been passed down for generations in Tucson on Oct. 28, 2018. Ramos uses the same recipe and technique from his great-great-grandmother, Cruz Alday Peña, in photo on left, and his great grandmother Cruzita Peña Ramos, right. He is making a name for himself as he sells his tortillas in places like Barrio Bread, Tucson Tamale Company and 5 Points Market and Restaurant. Ramos uses avocado oil, Sea of Cortez salt and Sonoran heritage wheat as his main ingredients.

He goes to school, he likes recess, plays football, and has his own tortilla business.

It all started as a summer project earlier this year. Abel’s grandmother, Sandra Robles, encouraged him to start his own business to begin raising money for his college fund.

“I don’t believe in idleness during the summer,” Robles explained.

Abel already had an interest in business and cooking — he caught the bugs when he worked at the restaurant his grandmother owned in Utah a few summers ago.

He knew what the business would be: He has been obsessed with his grandmother’s tortillas for as long as he can remember. He called it Chef Abel’s Tortillas.

Now that summer project has transformed into a full-fledged local tortilla business. You can find them at such places as Barrio Bread and Tucson Tamale Company.

To top it off, all the tortillas are vegan, non-GMO, low sodium and sugar free.

These clean ingredients were inspired by his great-great-grandmother’s original tortilla recipe but also by his grandfather’s stage 4 prostate cancer.

Abel’s grandfather or “Tata,” Fernando Robles, switched to the vegan diet after his cancer diagnosis two years ago. Abel and his grandmother wanted to be sure he could still enjoy the tortillas.

Robles taught Abel that a good business owner knows all aspects of production, which is why Abel is involved with every step of the tortilla-making process, from preparing the dough, to creating and rolling out the dough balls or “bolitas,” to cooking, weighing and packaging the tortillas.

With orders ramping up, his grandmother has stepped in to help make the dough so Abel can spend more time focusing on his school assignments.

During the school year, he spends weekends at his grandmother’s: they make the dough Friday nights, and he gets up at 4 a.m. Saturday to hand toss and bake 400 tortillas. He and his grandmother then deliver them to the outlets.

Chef Abel’s Tortillas had a slow start. Robles said the company initially struggled to find a location to actually sell the product. “The last step was selling them, but the farmer’s markets were closed because this was in June and we couldn’t get into (them),” Robles explained.

Enter Don Guerra, owner of Barrio Bread. Guerra also uses white Sonoran wheat in some of his bread and offered to let Abel sell his tortillas at his artisan bread shop as a starting point.

With his passion for supporting the local economy, coupled with his support of young entrepreneurship, retailing Chef Abel’s Tortilla’s was an easy decision for Guerra.

Guerra said he saw a lot of similarities between his young self and Abel.

“I started shoe shining when I was 8 years old and turned it into a business,” Guerra says. “And I’m Latino so it’s important for me to stick true to my heritage and support Latino entrepreneurship.”

Guerra said he, too, started out as a small business and is happy to see the growth that Chef Abel’s Tortillas has achieved since their beginning at Barrio Bread.

“Now, we usually sell out within a half an hour to 45 minutes (at Barrio Bread),” Robles said.

Abel’s small business operates under the cottage license, the same one Guerra had when he was starting out, which allows them to make the tortillas at home. Abel has also taken the food handlers test and is a stickler for sanitation.

“Last week we were eating chips with guacamole and I saw her trying to double dip and I said ‘no double-dipping, grandma,’” Abel said with a laugh.

The duo recently ordered some new equipment, which will help speed up production of Abel’s tortillas.

“They’re still going to be handmade and cooked at home but we’ll actually be able to keep up with the demand now,” Robles said.

Chef Abel’s Tortillas will soon be expanding to more locations in Tucson and Phoenix, she says.

Abel even says he’s looking into publishing a cookbook that will provide healthy and satisfying recipes for kids, which will include his favorite “peach roll up” recipe.

“What we do is, we make tortillas and we put butter (and cinnamon) on it, then we put peaches on it and wrap it up. Then I cook it in a little pan and keep making them” Abel said. “I feel like eating them now.”

Sarah Workman is a University of Arizona journalism student apprenticing at the Star.

Where to get Chef Abel's tortillas

Keep up with Chef Abel

Volunteers with A Moment of Magic strive to make kids smile.

Tucson teen's divine dance is the culmination of years of training

16-year-old Meena Ravishankar trained for 10 years for the dance — a form of divine worship.

He's made big waves from his flagship Tucson restaurant to our nation's capital and back home again.

Green tea: The new health food must have

Here’s the tea: Green tea is the new health food must have.

Chef Abel Ramos, 11, stands in the kitchen where he makes tortillas using a recipe from his great-great-grandmother. The tortillas are vegan, non-GMO, low sodium and sugar free.

Chef Abel Ramos, 11, uses his family’s recipe and techniques that have been passed down for generations in Tucson on Oct. 28, 2018. Ramos uses the same recipe and technique from his great-great-grandmother, Cruz Alday Peña, in photo on left, and his great grandmother Cruzita Peña Ramos, right. He is making a name for himself as he sells his tortillas in places like Barrio Bread, Tucson Tamale Company and 5 Points Market and Restaurant. Ramos uses avocado oil, Sea of Cortez salt and Sonoran heritage wheat as his main ingredients.