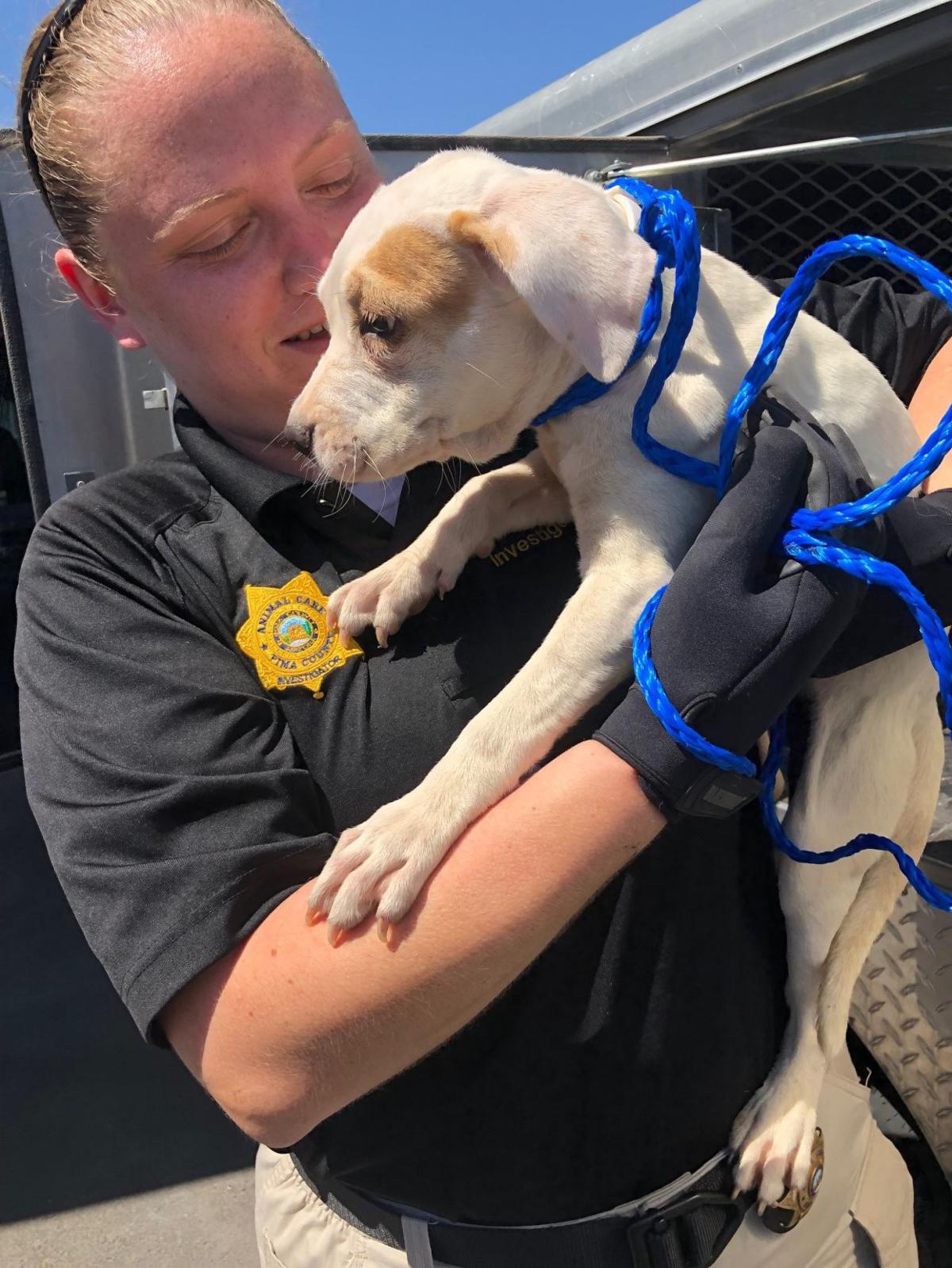 Forty-three animals, including 34 cats, were found in and around a trailer near the Tucson Mountains in June. 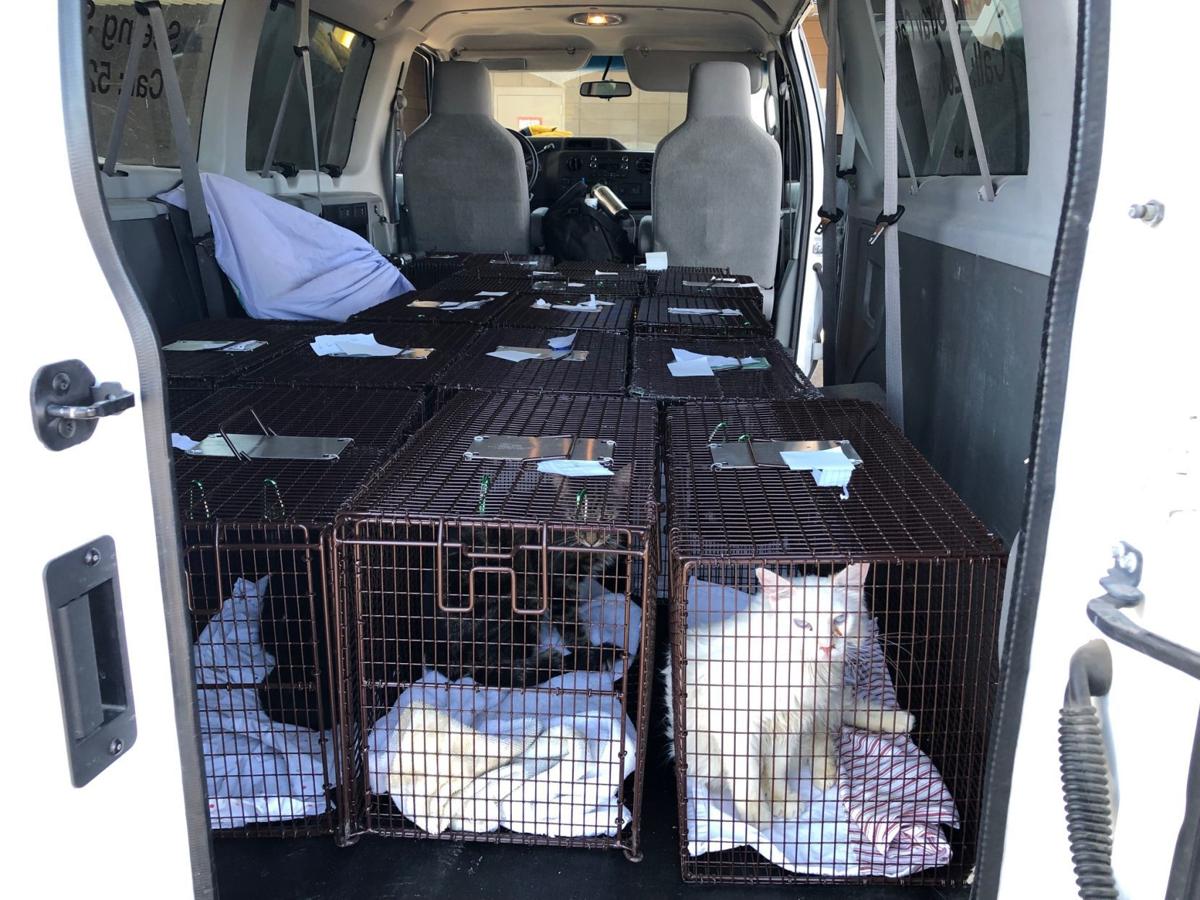 Two people were arrested on suspicion of animal cruelty after dozens of cats were seized from a property near South San Joaquin Road and Arizona 86 on June 19.

More than 4,000 pets have been rescued from animal hoarding cases in Pima County since 2014, far exceeding the caseload seen in other jurisdictions, data shows.

The Pima County Animal Care Center recorded 189 cases of animal hoarding between 2014 and 2019, including 13 cases this year, according to county data acquired by the Star. In total, 4,195 animals have been impounded in hoarding cases since 2014.

By comparison, Albuquerque, which has a population size and demographic similar to Tucson, had 17 cases of animal hoarding between 2014 and summer 2019.

Hassen-Auerbach, who previously worked in leadership positions at shelters in Fairfax, West Virginia, and Austin, Texas, said Pima County’s animal hoarding caseload is the highest she’s seen. “It’s definitely the most I’ve ever experienced in a community,” Hassen-Auerbach said.

“We really don’t have data on this. It’s sort of one of the puzzles that we’re trying to solve at PACC,” Hassen-Auerbach said. “And we really don’t know why we have what seems to be such a high number of overwhelmed caregivers.”

PACC has a relatively high intake for a shelter that services a county of about 1 million people. Last year PACC took in 17,000 animals.

Adam Ricci, the chief of field operations at Albuquerque’s Animal Welfare Department, was formerly chief animal protection officer at PACC from 2016 to 2018. During his experience with PACC, Ricci says he learned that there’s no one source explaining why some people accumulate animals, making it a difficult issue to address.

While Albuquerque’s hoarding caseload is much lower than Pima County’s, Ricci said that when he previously worked in Maine, that shelter addressed only one to two cases a year.

Part of the issue is that animal hoarding itself and related behaviors are still not fully understood.

The phenomenon of animal hoarding was first addressed in academic literature in 1981. In 1997, the Hoarding of Animals Research Consortium was founded to gain insight into an issue that receives relatively little attention in the medical community, according to the group’s website.

Nationwide trends regarding animal hoarding are not yet available, however. According to the Anxiety and Depression Association of America, approximately 250,000 pets are hoarded annually.

The causes of animal hoarding are not fully agreed upon, though studies suggest that trauma or a major change in lifestyle, such as death of a family member or sudden job loss, can act as an inciting incident.

The PACC recognizes the difference between cases of animal hoarding and cases of overwhelmed caregivers, said Hassen-Auerbach.

Animal hoarding is a mental disorder that is often connected to other issues, said Hassen-Auerbach, citing her experience.

“Reasonably, one person, even one family, cannot care for that many animals, typically, unless they have great, great support,” Hassen-Auerbach said.

In a 2015 article for Psychiatric Times, Dr. Gary Patronek, a veterinary epidemiologist and founding member of the Hoarding of Animals Research Consortium at Tufts University, separated animal hoarders into three types: overwhelmed caregivers, rescuers and exploiters.

He and his co-authors described overwhelmed caregivers as pet owners who were able to care for a large amount of animals previously, but who, due to a change of health, finances or other factors, can no longer maintain adequate care and conditions worsen.

Rescuers are driven by a compulsive need to save animals from shelters or euthanasia. Exploiters regard animals as things to be controlled by themselves. Overwhelmed caregivers are the type of animal hoarder most likely to comply with authorities, according to Patronek.

“Overwhelmed caregivers are much more prevalent, and there can be a fine line between those two things,” Hassen-Auerbach said.

The process for removing animals from hoarders or overwhelmed caregivers can differ greatly depending on the specific situation and the condition of the animals.

Hassen-Auerbach said that in cases of overwhelmed caregivers, PACC workers can remove animals from the home gradually, prioritizing any sick or injured pets first. In such cases, animals are removed until only a reasonable amount remain in the home.

For more pressing cases of animal hoarding, where the animals may be in very poor health, PACC may remove all pets from the home in one day.

“One thing that PACC does a really good job at is working with folks in reducing their numbers over a period of time so they’re not always doing these big search warrants and these big seizures all at once,” said Ricci, of the Albuquerque Animal Welfare Department.

All pets removed from overcrowded homes are either spayed or neutered to help curb further overpopulation.

After particularly large cases, with many animals in need of medical care, PACC may apply for grant money or reach out to the community for help with the animals.

“We’ve found tremendous support in Pima County,” Hassen-Auerbach said. “When the community knows there’s a hoarding case, oftentimes we will start getting calls about adopting those pets the day they come in.”

Turned in by a neighbor

It is rare for people to reach out themselves to PACC or others for help, according to Hassen-Auerbach. More often than not, a family member, friend or neighbor will be the one to identify the problem and contact the PACC.

Animal hoarders may or may not actually acknowledge the problematic nature of the condition they keep their pets in, which can be a barrier to receiving help, said Patronek and his co-authors. Overwhelmed caregivers are more likely to exhibit awareness of their problem, while exploiters and rescuers will deny having any issues.

Another reason people are reluctant to reach out is the stigma around being unable to care for their pets and the fear that they will be removed permanently.

“One of the things we’re finding is that people are afraid to tell us that they’re overwhelmed because they’re afraid we’ll take their animals from them,” Hassen-Auerbach said. “So we’re doing a lot of work to actively fight that perception.”

In addition to providing pets with adequate care, PACC also works with the Pima County Health Department and other social service agencies to address some of the root causes of overwhelmed caregivers, such as declining health.

PACC’s goal is not to shame animal hoarders and overwhelmed caregivers, but to be a resource for pet owners so that both they and their animals receive the support they need, Hassen-Auerbach said.

“We want people to know that if they come to us for help, we are there to help them,” Hassen-Auerbach said.

Vanessa Ontiveros is a University of Arizona journalism student and Star apprentice.

With school out and summer here, it is not uncommon for teenagers to get summer jobs. But instead of flipping burgers or folding jeans like ma…

Pets seized in June hoarding case up for adoption at PACC

In June, 43 animals were seized by Pima County animal control officers during a hoarding situation. The dozens of cats and dogs have been medi…

After years of dormancy, the Tucson Police Department is reviving its Safe Place program, which aims to provide a sense of security for victim…

Forty-three animals, including 34 cats, were found in and around a trailer near the Tucson Mountains in June.

Two people were arrested on suspicion of animal cruelty after dozens of cats were seized from a property near South San Joaquin Road and Arizona 86 on June 19.