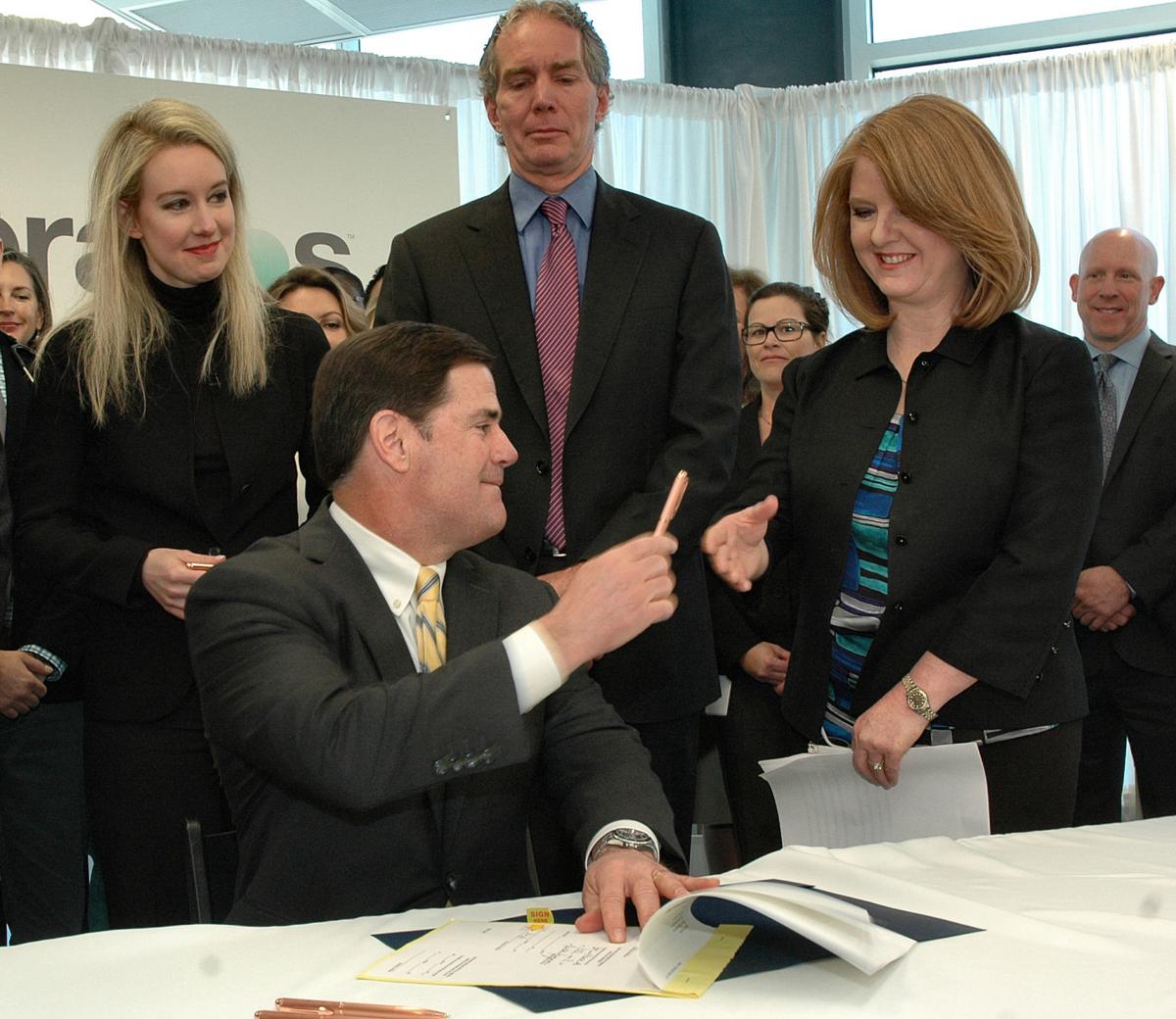 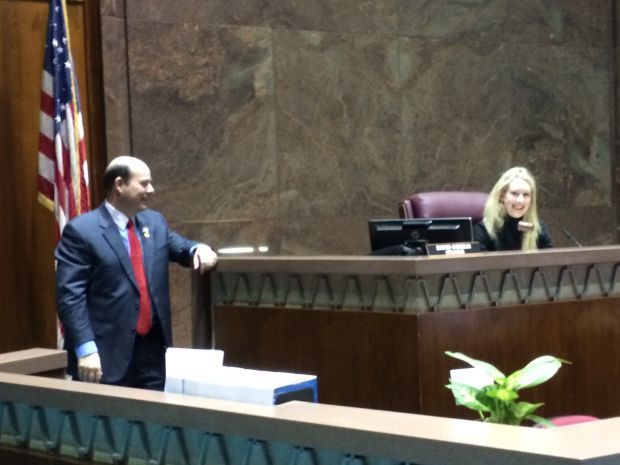 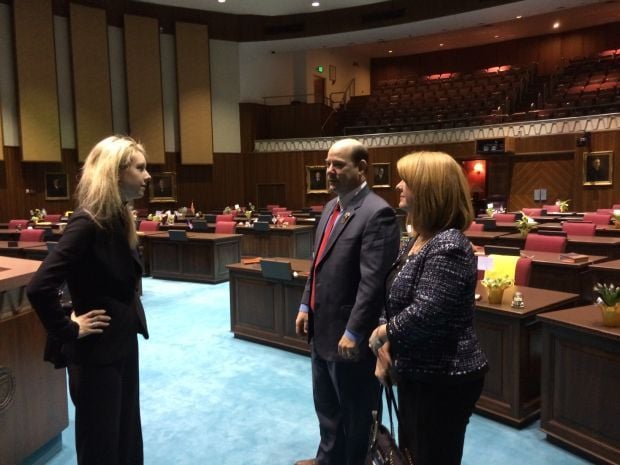 House Speaker David Gowan, center, shows Elizabeth Holmes, left, the founder and CEO of biomedical firm Theranos, around the floor of the State House Tuesday. Rep. Heather Carter, right, brought Holmes to the State Capitol Tuesday so that Holmes could explain a bill that would allow the general public to get their blood tested without a doctor's order.

In hindsight, the legislators were defenseless.

Elizabeth Holmes swept into Phoenix in early 2015 with an expertly sharpened story and a quiver full of buzzwords.

By the time she was done, she’d slayed them.

Holmes is the founder and CEO of Theranos, a company that was the toast of Arizona a year ago and now is a husk of its once robust self. Last year, Forbes Magazine estimated Holmes’ net worth at $4.5 billion. In June they revised that figure to zero.

But before her biomedical company’s rapid unraveling this year, Holmes was able to win over Arizona’s executive branch and Legislature. It’s a story that should give us pause about the state government’s rush toward deregulation and recruiting out-of-state companies, and make us ponder our choices in this year’s election.

I was lucky to get a little insight into Holmes’ courtship of the Legislature in March 2015. That month, House Speaker David Gowan, of Sierra Vista, let me shadow him for a day, and it turned out to be the day Holmes and her entourage met with Gowan and the rest of the House leadership.

She arrived in a huge black SUV accompanied by several bodyguards and the requisite local lobbyists. It was an impressive show.

By that time, the outline of her story was well-known. Holmes, now 32, had dropped out of Stanford at 19 to pursue an idea: Medical information for the masses without the need of a doctor’s order. Her key technology was a device called Edison that allowed complete blood testing taken from a finger stick and a few drops rather than the multiple vials patients normally must give.

In the conference room next to Gowan’s office last March, Holmes reeled off the names of some members of her politically illustrious board — former secretaries of state George Shultz and Henry Kissinger among them. She told the dozen or so legislators and aides present that her goal was to “create free-market competition to drive prices down and increase transparency.”

At that, Gowan perked up and said, “You’re talking to free-market-minded people here, so you’re talking in the right tone.”

She also reeled out a personal story that she must have told thousands of times. Her uncle, whom she grew up adoring, had gotten skin cancer, which quickly turned to brain cancer, and then he died. Even then it struck me that the catch in her voice as she told the story might have been deliberate, though I dismissed my doubts as too cynical.

“We want to build operations here that can serve as a national model,” she said.

The bill she was supporting, HB 2645, sponsored by Rep. Heather Carter, opened up the laboratory testing business, so that individuals could get tests without a doctor’s order. The idea is, abstractly speaking, a noble one: People might get a diagnosis earlier if they can access labs themselves, before symptoms show. Already, though, the state health department allowed patients to get a limited number of tests on their own.

As it turned out, Holmes’ effort was an unnecessarily hard sell, because the sale was not hard. Gowan and the House leadership quickly got on board. Gov. Doug Ducey did as well.

The Arizona Medical Association, which opposed the measure, reported this to its members: “Sponsored by Rep. Carter, this bill was ‘wired’ from start to finish, thanks to high-powered lobbying by lab juggernaut Theranos and backing by Speaker Gowan and Governor Ducey.”

The legislators asked some questions — Rep. Randy Friese, the M.D. from Tucson, for example, raised concerns that a patient could have tests done at a lab and the patient could not properly interpret the results without medical training. But the legislators, Republican and Democratic, did not zero in on the one question that might have changed perceptions of the bill:

“Does your blood-testing technology work?”

Even Rep. Eric Meyer, another Democratic physician in the state House, acknowledged missing some key info despite meeting with Holmes and sitting on the House Health Committee.

With lopsided passage of the bill, Theranos began providing lab tests to customers with or without doctors’ orders at its 40 “wellness centers” in Phoenix-area Walgreens stores. About a dozen tests were done using the new Edison device, while other blood draws were done the traditional way.

That in itself raised questions — if it had this revolutionary blood-testing technology, why was the company still drawing vials of blood from some people? An Oct. 15, 2015, report in the Wall Street Journal explained why: Edison did not work.

This led to investigations of the company by federal regulators, who ultimately, in July, banned Holmes from owning or operating medical laboratories for two years.

More alarmingly for Arizona patients, in May the company declared all of the lab tests it conducted using the Edison technology void and sent out tens of thousands of letters to patients and doctors.

Among the lawsuits that have been filed against the company is one by a Sun City man who claimed his risk of heart problems went undetected due to a faulty Theranos test, and he subsequently had a heart attack.

This is where Arizona’s leadership fell down on the job: It failed to protect Arizona customers from a company that found the state an easy target in its zeal for deregulation. This wasn’t a company that was seeking tax breaks and incentives, which perhaps made their proposal an easier sale. What they needed was a law that gave them access to Arizona’s people.

In this case they needed our customers, not our money, noted Steve Farley, a state senator from Tucson who was one of only two in his chamber to vote against the bill.

Why did they need our customers? The Wall Street Journal reported in June that, after years of venture-capital funding, the company’s 40 blood-draw sites inside Arizona Walgreens stores had become Theranos’ primary source of capital.

In other words, they were using Arizona customers’ money to fix the technology, Edison, that they had claimed they were already successfully using.

You would think we would consider focusing more on the boring but effective forms of economic development — education, infrastructure and the like — than continuing to grasp at hot California startups. But that hasn’t been the case.

Zenefits, a California online human-resources company, expanded to Arizona in 2014, attracted by promised incentives. This year, after a crackdown by California regulators, the company has laid off much of its Arizona workforce, voiding the state’s incentives.

AirBnB convinced the state Legislature this year to prohibit cities from making local ordinances restricting the rental of rooms or properties. Uber remains the darling of the Ducey administration.

“I think it’s our job to be a little more circumspect when somebody comes in and puts on a well-choreographed show,” Farley said. “Ask questions. Think about what might happen when things go wrong.”

Experience says that won’t happen, even after the collapse of Theranos. A good show featuring a few well-deployed buzzwords — disrupt, sharing, free-market, reform — still goes a long way toward convincing the powers-that-be that you deserve a break from Arizona.

Steller: Money motive on both sides of pot legalization

Steller: In Tucson, Uber drivers are wanted — and doomed

Company is signing up 1,500 drivers here, but over long run must get rid of them.

The devalued Tucson pedestrian should get a chunk of our next big infrastructure spending.

Tim Steller: Here's the subject I can't write about

You may have heard that the sky is falling, but it's not, especially not in Tucson.

Elizabeth Holmes goes on trial this week in California this week on criminal charges. Six years ago, she got Arizona lawmakers and Gov. Doug Ducey to change state law to financially benefit her company.

For Star subscribers: The efforts to undermine Arizona's election results looked laughable in late 2020. Now we can see they were part of an aggrieved electoral minority's effort to seize illegitimate power.

Tim Steller's opinion: Politics over First Avenue plan could be a bad sign

For Star subscribers: The City of Tucson wants to scale back a Regional Transportation Authority project to expand North First Avenue. The practical proposal would cost less and help pedestrians, but RTA is resisting.

For Star subscribers: Pima County is considering adopting an acknowledgment of the area's indigenous people and history. These simple acknowledgments are common lately but can be pointless, or worse, if done wrong.

For Star subscribers: Sen. Kyrsten Sinema is right to worry about political polarization, but that isn't the reason states are imposing voting restrictions. And she ought to push for filibuster reforms herself.

House Speaker David Gowan, center, shows Elizabeth Holmes, left, the founder and CEO of biomedical firm Theranos, around the floor of the State House Tuesday. Rep. Heather Carter, right, brought Holmes to the State Capitol Tuesday so that Holmes could explain a bill that would allow the general public to get their blood tested without a doctor's order. 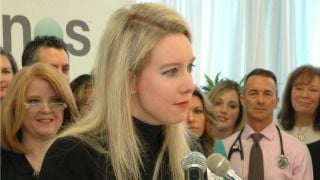