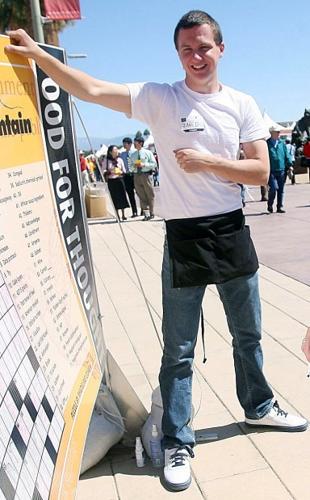 This March 2010 photo shows a man identified as Jared L. Loughner at the 2010 Tucson Festival of Books. The Arizona Daily Star is one of the festival sponsors.

Jared Loughner, in his junior year in the 2006 Mountain View High School yearbook. 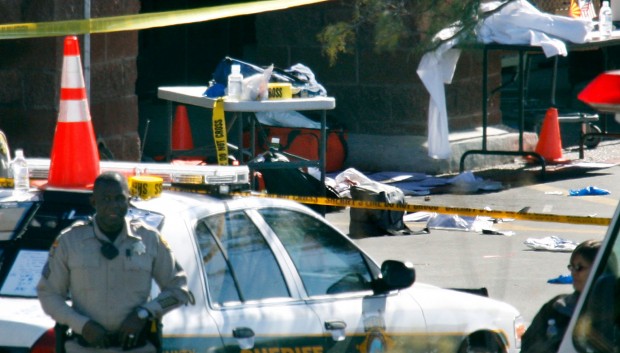 Emergency personnel stand near the scene of the shooting outside the Safeway grocery store at North Oracle and West Ina roads.
Tim Steller Arizona Daily Star

The man arrested on suspicion of opening fire at a community meeting held by U.S. Rep. Gabrielle Giffords Saturday - killing six people and injuring 13 others - disrupted classes at Pima Community College, tried to manipulate his dreams and posted rambling messages on the Internet.

The suspected shooter is Jared Lee Loughner, a 22-year-old who lives on the northwest side. He is mentally unstable and may have had an accomplice, Pima County Sheriff Clarence Dupnik said Saturday evening.

A former classmate of Loughner at Pima, from which he was suspended Sept. 29 for code-of-conduct violations, said he was "obviously very disturbed."

Dupnik said the suspected shooter has made death threats before and been contacted by law-enforcement officers. The threats weren't against Giffords, Dupnik said.

Investigators are looking for a second person who may be an accomplice, Dupnik said.

"We are not convinced he acted alone," Dupnik said of the shooter. "We have photos," he said, of a man in his 50s.

Loughner has several online accounts, which suggest he has spent most of his life on the northwest side: His MySpace profile says he attended Thornydale Elementary School, Tortolita Middle School and Mountain View High School.

As a middle school student, Loughner was "kind of an outcast," said Shannin Macey, who said via e-mail she attended Tortolita and Mountain View with him. In high school, Loughner was in jazz band and played the saxophone but he dropped out in junior year, said Tommy Marriotti, who was a high-school friend of Loughner.

At the time he dropped out, Loughner was having drug problems, Marriotti said, but he seemed to do well once he started taking classes at Pima.

Loughner attended Pima courses from summer 2005 until he withdrew in October after his suspension, the college said.

He tried to enlist in the Army in 2008 but was rejected, said First Sgt. Brian Homme, who oversees Army recruiting in Tucson. Loughner was sent to Phoenix to take a test and physical, but "he was found to be unqualified," Homme said.

Loughner registered to vote for the first time in 2006, said Chris Roads, Pima County's registrar of voters. He registered as an independent and last voted in the 2008 general election.

Sorenson, Loughner's classmate at Pima, said he was asked to leave the pre-algebra class several times and eventually was barred from class.

Pima officials said in a news release that from February to September 2010, Loughner had five contacts with PCC police for classroom and library disruptions at Northwest and West campuses.

Another Pima classmate, Lydian Ali, said Loughner would frequently laugh aloud to himself during the advanced-poetry class they attended. Only about 16 people were in the class, so Loughner's behavior stood out, Ali said.

"It almost seemed like he was on his own planet, because his comments would have nothing to do with what we were talking about," Ali said.

Loughner's online accounts contain some political comments but are dominated by bizarre discussions of his desire to establish a new currency and his disdain for what he considered the public's low literacy rates. He also wrote threatening and despairing messages.

In a posting on YouTube, Loughner wrote repeatedly about a new currency.

"I'm thinking of creating a new currency," he wrote. "Therefore, I'm thinking of a design for my new coins size, shape, color, material, and image to start a new money system."

In a message posted on his MySpace account, titled "Goodbye friends," Loughner said: "Dear friends...please don't be mad at me. The literacy rate is below 5%. I haven't talked to one person who is literate." It was unclear when it was posted.

In a MySpace profile, Loughner said "My favorite interest was reading, and I studied grammar. Conscience dreams were a great study in college."

He lists among his favorite books "Mein Kampf" and "The Communist Manifesto". But he also includes a broad variety of other titles, including: "Animal Farm," "Brave New World," "To Kill a Mockingbird," and "One Flew Over the Cuckoo's Nest".

In another YouTube message, Loughner said: "I know who's listening: Government Officials, and the People. Nearly all the people, who don't know this accurate information of a new currency, aren't aware of mind control and brainwash methods. If I have my civil rights, then this message wouldn't have happen."

"In conclusion, my ambition - is for informing literate dreamers about a new currency; in a few days, you know I'm conscience dreaming! Thank you!"

In a YouTube video dated Dec. 15, titled "Introduction: Jared Loughner," he describes himself as a U.S. military recruit who had applied to join the Army.

In the video, Loughner makes a rambling mention of "MEPS in Phoenix" an apparent reference to the Military Entrance Processing Station in the state capital that all Arizona recruits from every branch of service pass through before leaving for basic training.

"I didn't write a belief on my Army application and the recruiter wrote on the application: None."

In October 2007, Loughner was cited by the Pima County Sheriff's Department for possession of drug paraphernalia, a charge that was dismissed in November 2007 when he completed a diversion program.

One year later, in October 2008, Loughner faced a "local charge" in Marana Municipal Court. That charge was also dismissed following the completion of a diversion program in March 2009.

Court records indicate the Marana case file is due to be purged in December 2013. It's unclear what the exact charge was.

Grant Wiens, 22, attended Mountain View High School with Loughner, although they were not in the same grade.

Wiens also took a class with Loughner at Pima Community College, where they occasionally talked, he said.

"He was a guy in high school who definitely had his opinions on stuff and didn't seem to care what people thought of him," Wiens said. "He did his own thing."

What was in his head? YouTube reveals grievances on currencies, grammar, religion, Constitution

A series of videos on YouTube by Jared Lee Loughner -  whose name, city and school affiliation match that of the man apprehended in today's ma…

This March 2010 photo shows a man identified as Jared L. Loughner at the 2010 Tucson Festival of Books. The Arizona Daily Star is one of the festival sponsors.

Jared Loughner, in his junior year in the 2006 Mountain View High School yearbook.

Emergency personnel stand near the scene of the shooting outside the Safeway grocery store at North Oracle and West Ina roads.
© Copyright 2022 Arizona Daily Star, PO Box 26887 Tucson, AZ 85726-6887 | Terms of Use | Privacy Policy | Do Not Sell My Info | Cookie Preferences
Powered by BLOX Content Management System from TownNews.com.
You don't have any notifications.