US vaccinations rising again as official declares: 'The fourth surge is real.'

Dozens of families, many from Guatemala, arrive in Nogales seeking US asylum
Share this
1 of 4 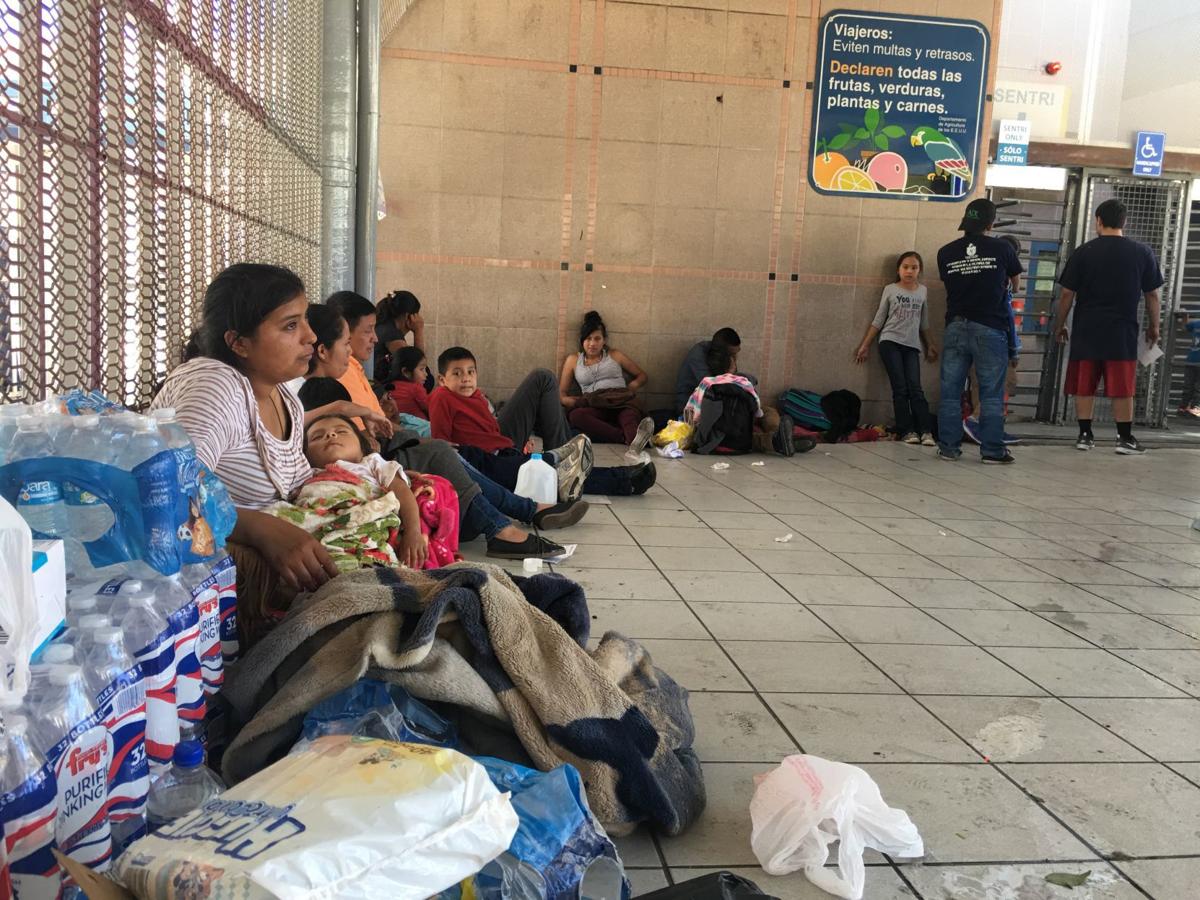 About two dozen people, mostly Guatemalan parents and their children, waited Monday to seek asylum in the U.S. at the pedestrian entrance of the DeConcini Port of Entry in Nogales. 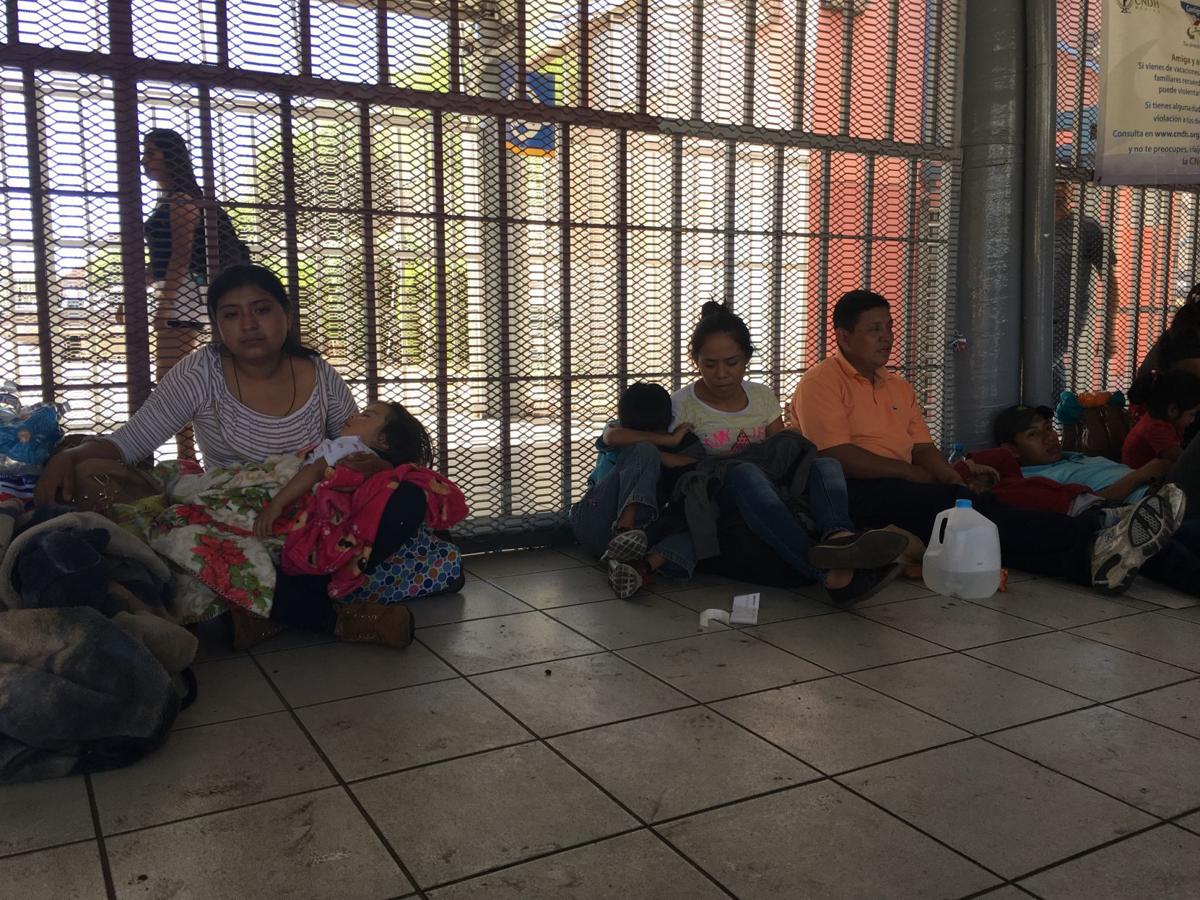 About two dozen people, mostly a Guatemalan parents and their children, wait around the pedestrian entrance of the DeConcini Port of Entry in Nogales as Customs and Border Protection allow about a handful of people at a time to be processed. 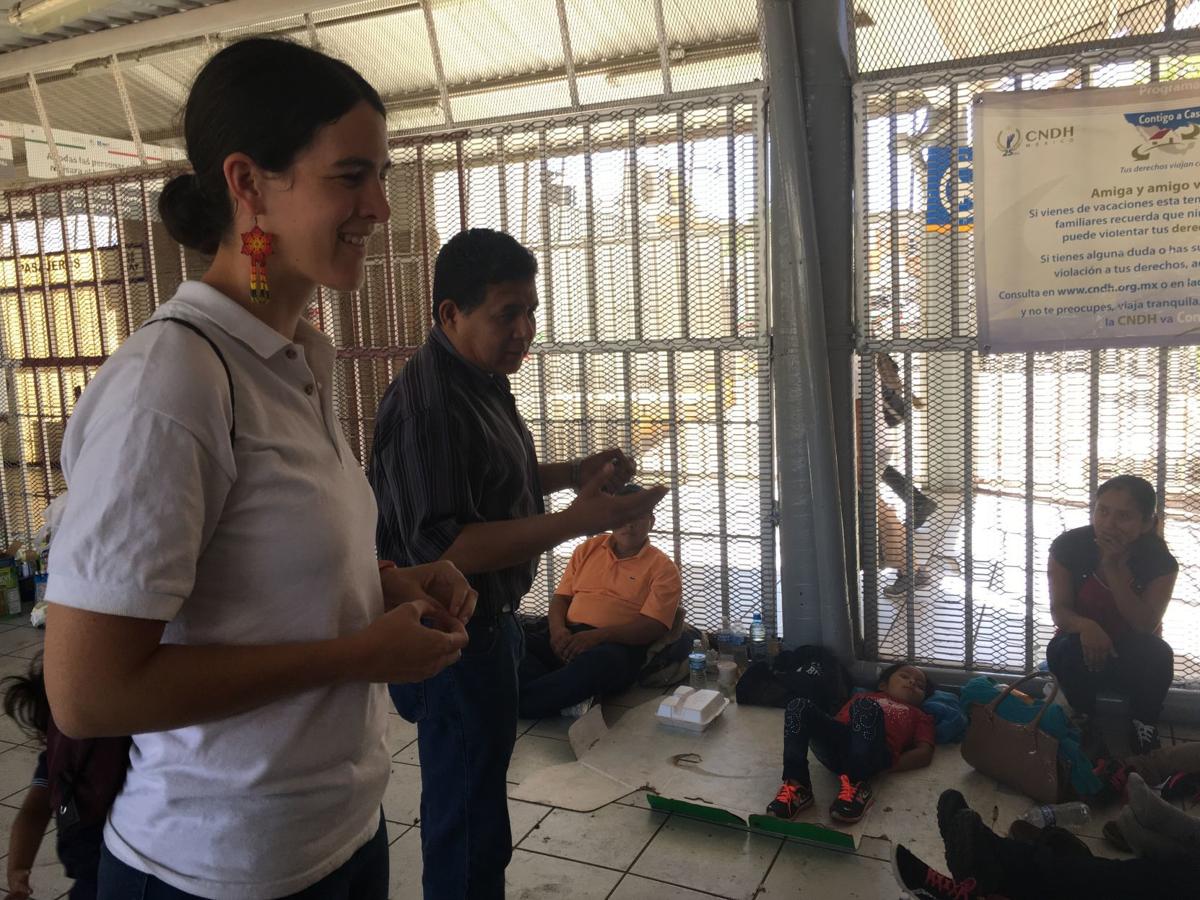 Johanna Williams with the Kino Border Initiative speaks on Monday to a group of mostly Guatemalan parents and their children who started to arrive in Nogales on Saturday to present themselves at the port of entry to seek asylum. 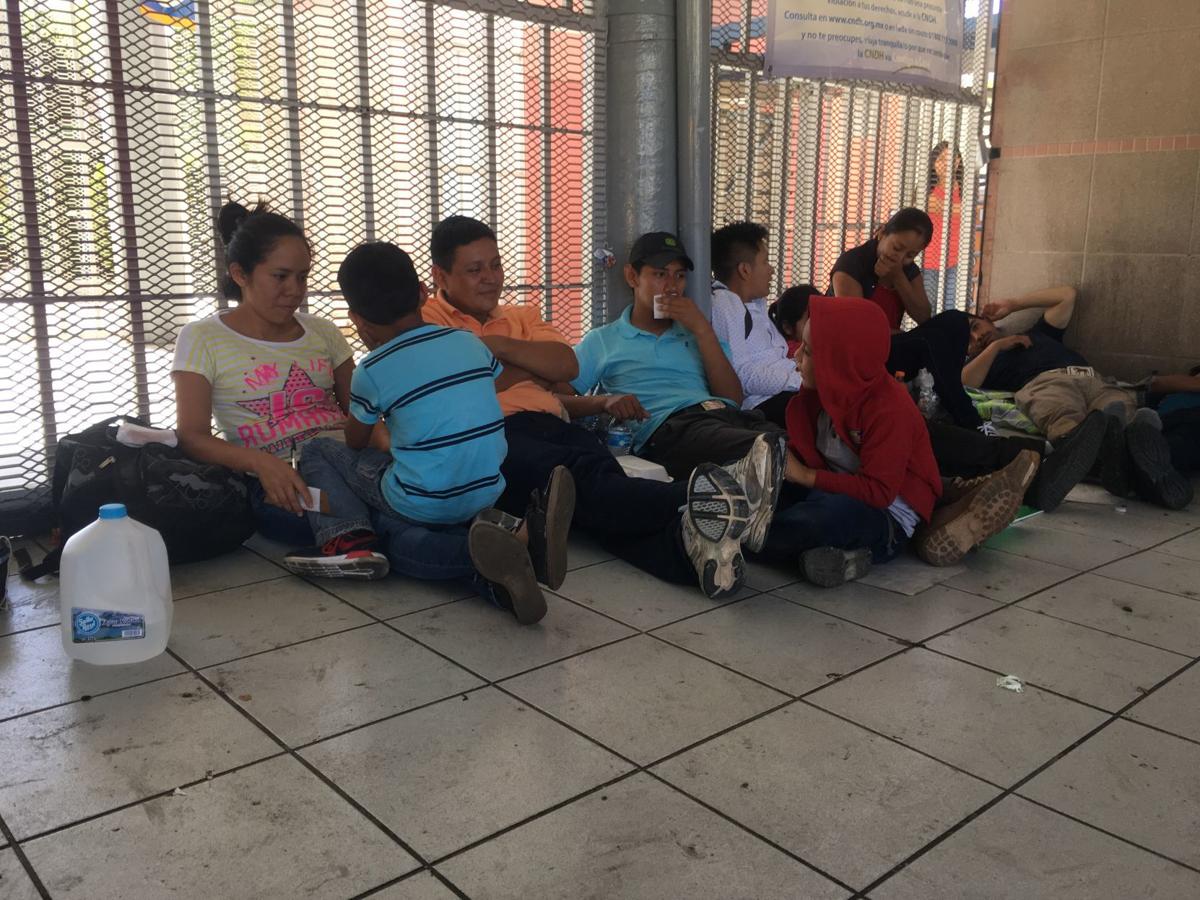 About two dozen people, mostly Guatemalan parents and their children, wait around the pedestrian entrance of the DeConcini Port of Entry in Nogales as Customs and Border Protection allow about a handful of people at a time to be processed.

NOGALES, Sonora — Faith they would make it across Mexico. Faith that U.S. officials would let them in. Faith they wouldn’t be separated once they crossed over. It bound them together through their travels and sustained them to the end, as they waited to be processed at the port of entry.

Dozens of families started showing up Saturday at the downtown port in Nogales to seek asylum, and officials processed a handful at a time.

By Monday, there were several who had slept on the floor, using cardboard and blankets as cushions, for two nights. More arrived Sunday and Monday.

By the end of the day, Mexican Red Cross workers said there were a few still left.

In a written statement, Customs and Border Protection said it processed people as quickly as possible “without negating the agency’s overall mission or compromising the safety of individuals within our custody.”

The number of families presenting themselves at ports of entry and between the ports has increased over the last several years.

So far this fiscal year (which ends Sept. 30) about 5,500 family units have presented themselves at ports in the Tucson Field Office, up 38 percent from about 4,000 families during this time last fiscal year, Customs and Border Protection data show.

After Mexicans, Guatemalans are the largest group. So far this fiscal year, nearly 8,000 Guatemalan family units have presented themselves at ports of entry along the Southwest border, up from about 6,000 in all of last fiscal year.

The Guatemalan consul in Tucson, Carlos de Leon, said he was heading to Nogales late Monday afternoon and didn’t yet know what brought the group there and what would happen to them.

A Guatemalan single man who presented himself at the port of entry over the weekend and was deemed inadmissible by the agency was returned to Mexico. He was still in line with the other families, trying to figure out how to get back to his native Guatemala.

In 2016, dozens of Haitian migrants also camped out at the same port of entry awaiting a chance to speak with U.S. immigration officials.

The families waiting in Nogales Monday said they were fleeing violence, extortion, violent partners and extreme poverty and had friends or relatives in places such as Georgia, Texas and Florida. Asylum applicants must prove they have been persecuted or fear persecution based on their political beliefs, race, religion, nationality or membership in a particular social group.

The group arrives at a time when the Trump administration has increased immigration enforcement and wants to deter people from coming in the first place.

“Today we are here to send a message to the world: We are not going to let this country be overwhelmed,” U.S. Attorney General Jeff Sessions said in a recent speech. “People are not going to caravan or otherwise stampede our border,” he added, in reference to the recent caravan of mostly Hondurans who traveled to Tijuana to seek asylum.

“We need legality and integrity in the system,” he said. “If you make false statements to an immigration officer or file a fraudulent asylum claim, that’s a felony. ... I have no doubt that many of those crossing our border illegally are leaving difficult situations. But we cannot take everyone on Earth who is in a difficult situation.”

The Department of Homeland Security doesn’t currently have a policy of separating families at the border for deterrence purposes. As required by law, “DHS must protect the best interests of minor children crossing our borders and occasionally this results in separating children from an adult they are traveling with if we cannot ascertain the parental relationship or if we think the child is otherwise in danger,” Tyler Q. Houlton, DHS press secretary, said in a written statement,

Diego Garcia left Guatemala about two weeks ago with his son, Elias, on top of the train known as “La Bestia.”

“We would wait for the train or take buses to get closer to where the train passed,” the 32-year-old bus driver said. While Elias, 8, said he wasn’t scared of riding on top of the train, Garcia said he held on to him tight, especially at night.

He left his wife and two little girls back home, but he said he had no other choice.

One day, he said, as he was driving his bus, a gang member approached him with a gun and handed him a cellphone with the message to deliver it to his boss.

“I’ll give you tonight,” Garcia said the man told him, “If your boss doesn’t answer, te doy pa’bajo” (“I’ll kill you”). He told him he knew his family, he knew that he had a son, where he studied, how old he was.

Garcia knew all too well their threats were real. Just two years ago, the gangs who extort business owners like his boss had shot and killed another driver.

“The journey has been difficult but going back would be going back to a death sentence,” Garcia said as he waited his turn to tell his story to port and immigration officials who would decide whether his fear was credible enough to allow him to enter the United States’ asylum system.

While it was a difficult choice to leave his wife and daughters behind, he said, “it’s better to be apart but alive.”

In the group there was also a 30-year-old woman, Maria Fernanda, with her son Damian. She left Guatemala on May 1 and said God has been with her throughout. God is the reason why Mexican immigration officials didn’t stop her and God will decide her fate once she gets across, she said. Among other things, she said she was fleeing an abusive partner who had threatened her life and didn’t know she had fled the country.

Fernando Garcia, no relation to Diego, was fleeing a gang who wanted to recruit him. “What they do doesn’t seem right to me,” said the 17-year-old, who works in agriculture.

“I’m an evangelical, I go to church, and what they do goes against God’s will.” It was a painful decision, but one his family felt they had to make, he said.

Before the end of the day, he was allowed to proceed.

There were other parents who had heard that the government was giving asylum to those who traveled with their children, but not many had heard the administration’s recent plans about potentially prosecuting those who enter the country illegally, even if that meant separating parents from their children.

When asked about the thought of being separated from his son, Diego Garcia said: “We put our trust in God that this won’t happen.”

Watch now: How to sew a button that's come off a garment

Watch now: How to sew a button that's come off a garment

Haitians hoping for US asylum gather at Nogales border crossing

They are just a few of the roughly 5,000 Haitians who have arrived at the U.S.- Mexico border in recent months.

Man shot in struggle with border agent ID'ed as Guatemalan, 26

Details of his wounds are detailed in an autopsy report.

More "inadmissibles," many from Cuba and Central America, are turning themselves in at ports of entry.

Mounis Hamouda has been released from detention while his case moves ahead.

Palestinian refugees in limbo after 7,000-mile journey to US border

Few options for the stateless when their asylum applications are denied.

The U.S. Commission on Civil Rights also criticizes the use of private prisons.

Priorities clash: New arrivals are a priority to be detained, but pregnant women are supposed to be released.

The Trump administration continues its unvarnished attempts to make life difficult for immigrants.

A simple breakdown of the rigorous and lengthy screening process all refugees must go through before resettling in the United States. Produced…

“Arizona is one of the most understaffed field offices that we have,” says Customs and Border Protection official.

Arrivals of people from Guatemala, Honduras and El Salvador have risen consistently as overall migration from Mexico slows down.

About two dozen people, mostly Guatemalan parents and their children, waited Monday to seek asylum in the U.S. at the pedestrian entrance of the DeConcini Port of Entry in Nogales.

About two dozen people, mostly a Guatemalan parents and their children, wait around the pedestrian entrance of the DeConcini Port of Entry in Nogales as Customs and Border Protection allow about a handful of people at a time to be processed.

Johanna Williams with the Kino Border Initiative speaks on Monday to a group of mostly Guatemalan parents and their children who started to arrive in Nogales on Saturday to present themselves at the port of entry to seek asylum.

About two dozen people, mostly Guatemalan parents and their children, wait around the pedestrian entrance of the DeConcini Port of Entry in Nogales as Customs and Border Protection allow about a handful of people at a time to be processed.