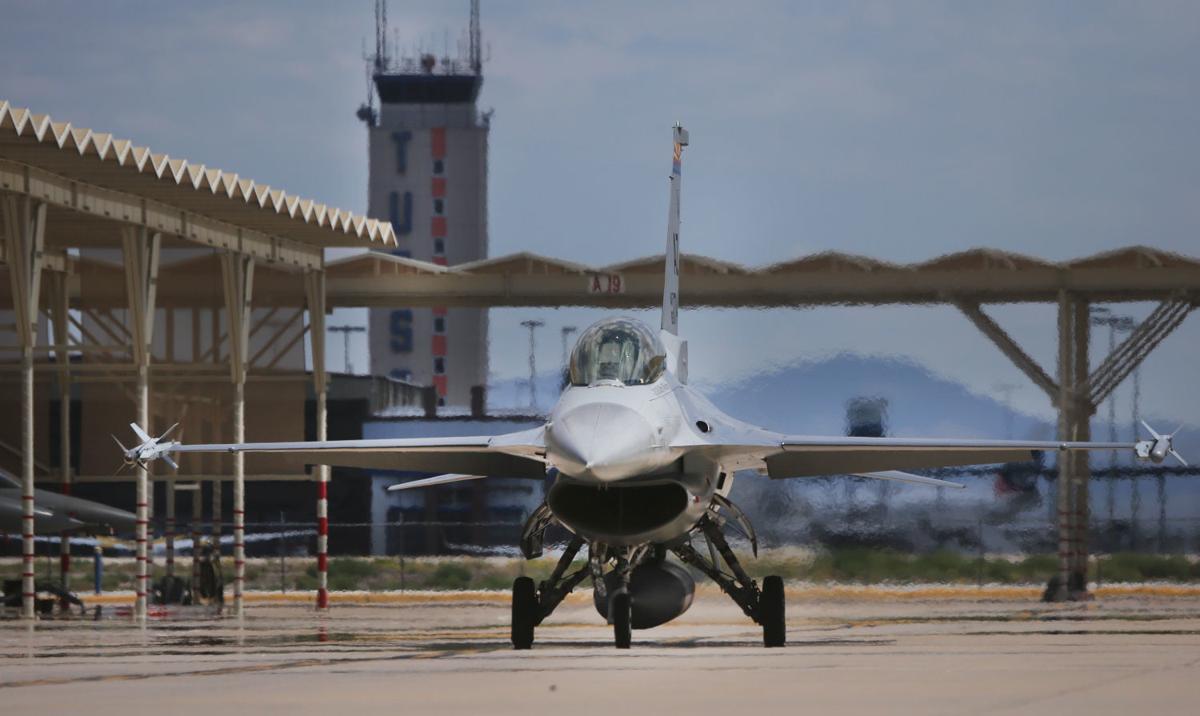 A report on the water beneath the Arizona Air National Guard base on the south side says PFAS concentrations ranged from nearly 70 times the EPA’s recommended health advisory level to just above the advisory level. 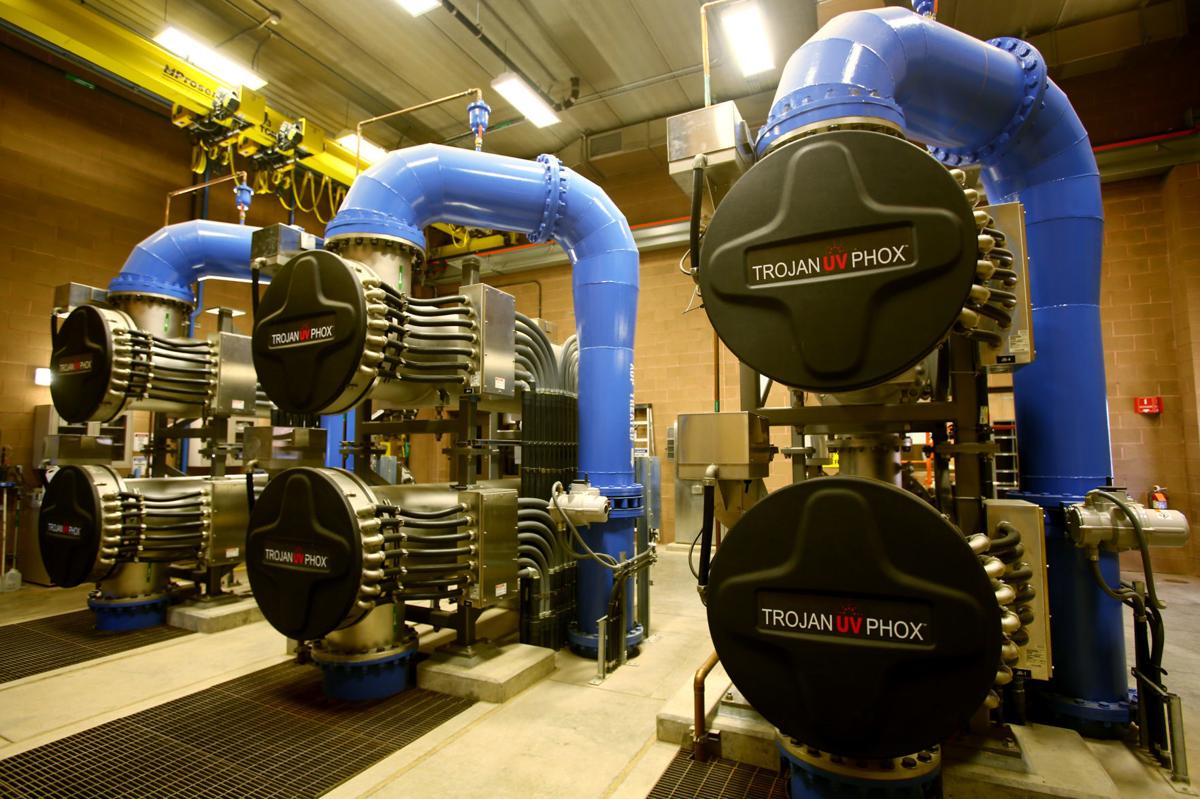 Well water with contaminants passes through Tucson Water’s treatment plant near Irvington and I-19.

The same chemical compounds that have tainted drinking wells from Tucson’s south side to Marana have been found polluting groundwater underneath the Air National Guard base adjoining Tucson International Airport, a consultant’s report for the Air Guard says.

Perfluorinated compounds, commonly known as PFAS, turned up in levels exceeding recommended federal standards in the aquifer underneath the Air Guard base, said the consultant’s report.

But while the contamination appears to be moving toward city drinking wells on Tucson’s south side, the pollution doesn’t pose any immediate health risk to water users, Tucson Water officials say.

The newly discovered contamination was widespread, tainting eight monitoring wells across the base and at least one more well at the base’s northern boundary, the report found. Sampling for the report was done from January through March 2018.

The Air National Guard Base lies just across East Valencia Road from a residential area that’s also peppered with patches of undeveloped desert.

The base plays host to the 162nd Air National Guard Wing, which has the world’s largest training base for F-16 fighter pilots.

Published in March, the PFAS report was prepared by consulting firm AEPCOM. The Arizona Daily Star obtained it recently from the Arizona Department of Environmental Quality through a public-records request.

Levels too high for drinking water

The pollutant concentrations ranged from nearly 70 times the EPA’s recommended health advisory level at a well at the base’s northern boundary, to just above the EPA advisory farther south on the base, said the report.

Another monitoring well contained about 30 times the EPA health advisory level of 70 parts per trillion, the consultant’s study found.

The U.S. Environmental Protection Agency recommends that people stop drinking water with PFAS at that level.

But the federal Agency for Toxic Substances Disease Registry has recommended a much lower limit, of 18 parts per trillion. Some states have already approved new, lower mandatory or recommended limits.

Measurable levels of PFAS compounds turned up in soil samples collected on 14 locations on the Guard base, but exceeded recommended health limits only at one of those locations, the report said.

The apparent source of much of this contamination was firefighting foam formerly used on the base for firefighting and fire-training activities.

In a written statement Friday, the Air Guard said it has stopped using the material, but it didn’t immediately have more details on when that occurred or how long it was used there.

The foam, called aqueous film-forming foam, has been used at Air Force and other military facilities across the country and is blamed for widespread PFAS contamination emanating from many of those facilities.

Because of the high levels found at the base’s northern boundary, the consultant said it appears that the PFAS contamination is moving from the base to the northwest, toward city of Tucson drinking wells.

That opinion was shared by ADEQ and EPA officials who wrote comments last fall and winter on a draft version of the report.

At the same time, Tucson Water officials note that the nearest city wells, lying 1.5 to 2.7 miles northwest of the base, are already out of service because of previously discovered contamination from PFAS, trichloroethylene and 1,4-dioxane.

Polluted water from those wells is being funneled to a south-side treatment plant known as the Tucson Airport Remediation Project.

There, it’s being treated so thoroughly that the compounds are no longer detected as the water leaves the plant to be served to people in the downtown area and just north and south of there.

More for treatment plant to clean up

That’s because it’s yet another location that now or will in the near future be impacting Tucson’s groundwater quality, Thomure said.

It’s a reasonable possibility that PFAS from the base are already contaminating south-side wells that supply the treatment plant, he said.

“It is another location that needs to be monitored and then remediated, but not an imminent threat to public health or drinking water quality,” Thomure said.

Marana wellfields have also been tainted by PFAS compounds. The town is planning to build and operate treatment plants to clean up that water at a cost of $15 million.

The new Air National Guard consultant’s report recommended that a more detailed investigation be undertaken to determine more completely the extent of contamination on the base, and how far the contamination has traveled north and west of the base.

It also recommended an investigation of how far upslope of the base the groundwater contamination exists.

The EPA and ADEQ’s comments agreed with the consultant’s recommendation. The agencies also recommended that future investigations take samples of both public and private wells lying downhill from the base.

The investigation could also benefit by checking potential sources of PFAS on airport property, including areas that the Air National Guard formerly used for fire training there, the EPA said.

Air National Guard officials “need to do enough work to be able to figure out how to contain it and how to clean it up,” said Tucson Water’s Thomure.

“Right now, since it’s not directly impacting or threatening a specific well ... there is a little time to figure out how best to clean it up. But they do need to move quickly,” he said.

In a statement released Friday, the Air National Guard said the goal of the Air Force — for which the Tucson Air National Guard base trains pilots and supplies fighter jets — “is to protect human health and ensure mission activities do not impact installation and supporting communities’ access to safe drinking water.”

Its statement implied that an additional investigation will be done but contained no specifics. An Air National Guard spokesman, Master Sgt. Charles Givens, said more details will be forthcoming Monday.

The Air Guard “is using a comprehensive approach — identify, respond, prevent — in following Air Force’s guidance to assess the potential for (PFAS) contamination of drinking water and respond appropriately,” the statement said.

The Air Guard is following applicable federal and state laws to identify locations where the compounds may have been released from previous firefighting training and mission activities, the statement said.

The activities could have been conducted by military services from Davis-Monthan Air Force Base and the Arizona Air National Guard’s 162nd Wing, commercial aviation and industries operating in the shared use of Tucson International Airport, the statement said.

If a site inspection confirms the release of these compounds in groundwater, surface water or soils above federally recommended levels, the Air National Guard “will further investigate to determine the nature and extent of the release associated to our previous firefighting training and mission activities to determine future courses of action,” the statement said.

Tucson City Councilman Steve Kozachik, who was the first official to inform the media about PFAS groundwater contamination here, said that rather than do more studies, the Air National Guard should immediately start work on plans to contain and ultimately clean up its pollution.

Most of the base’s groundwater samples exceeded the EPA’s “rather lame” health advisory level by a significant amount, he said.

“We need the Department of Defense to step up and put into place with our Tucson Water staff specific containment and treatment facilities before this stuff gets into our central wellfield,” Kozachik said.

“This bureaucratic slow-walk is placing our groundwater supply at risk, and the federal government’s inaction is both unsafe and unethical,” he said.

But first, the Air Guard base needs to establish the extent of any PFAS groundwater contamination “plume,” just as authorities did in the 1980s when TCE was found across the south side’s aquifer, Thomure said.

At the same time, “because we are on the front end of PFAS contamination, the longer any source waits to address it, the further out it spreads, and the harder it is to contain and remediate,” Thomure said. “The sooner they move, the better, but they do have time.”

The ADEQ said it doesn’t have the legal authority to require the Guard base to clean up the contamination on its site.

That’s because the EPA has no formal drinking water limit for PFAS compounds and because Arizona law doesn’t allow the state to have more stringent environmental regulations than the federal government has.

But at an environmental conference in April in the Washington, D.C., area, ADEQ Director Misael Cabrera asked the deputy assistant secretary of defense for the environment to speed up addressing PFAS contamination issues at Defense Department sites in Arizona, said Erin Jordan, a spokeswoman for the state environmental agency.

To look for PFAS, Davis-Monthan has recently drilled two monitoring wells on the northwest corner of the Air Force base and one off base, close to the contaminated city wells, according to Thomure. State and city officials are awaiting those test results.

Earlier tests found no detectable PFAS in groundwater underneath other parts of the base, a February 2019 report done by Davis-Monthan said.

In addition, in April, Air Force officials revealed that Luke Air Force Base in Glendale had found elevated levels of PFAS compounds in its underlying aquifer — with some samples exceeding EPA recommended limits, The Arizona Republic reported.

The ADEQ continues to be in communication with the Defense Department, the EPA and the Pima Department of Environmental Quality about potential next steps for the contaminants , spokeswoman Jordan said.

“ADEQ agrees that accelerated cleanup should be a priority for the DOD,” Jordan said. “We also agree it is critical to protect drinking water sources.”

Some human health impacts that have been linked to long-term PFAS exposure, often over a lifetime:

Town officials hope to have the plants online to clean up contaminated groundwater starting in June 2020.

The chemical compounds in water have become a subject of local and national concern this year.

Scientists and agencies, however, are deeply split over safe level of PFAS in drinking water.

The base is studying the issue and can't yet say whether the compounds contributed to contamination of two Tucson wells.

PFAS chemical compounds' presence in groundwater under the base is "consistent" with where the foam was most heavily used.

A report on the water beneath the Arizona Air National Guard base on the south side says PFAS concentrations ranged from nearly 70 times the EPA’s recommended health advisory level to just above the advisory level.

Well water with contaminants passes through Tucson Water’s treatment plant near Irvington and I-19.