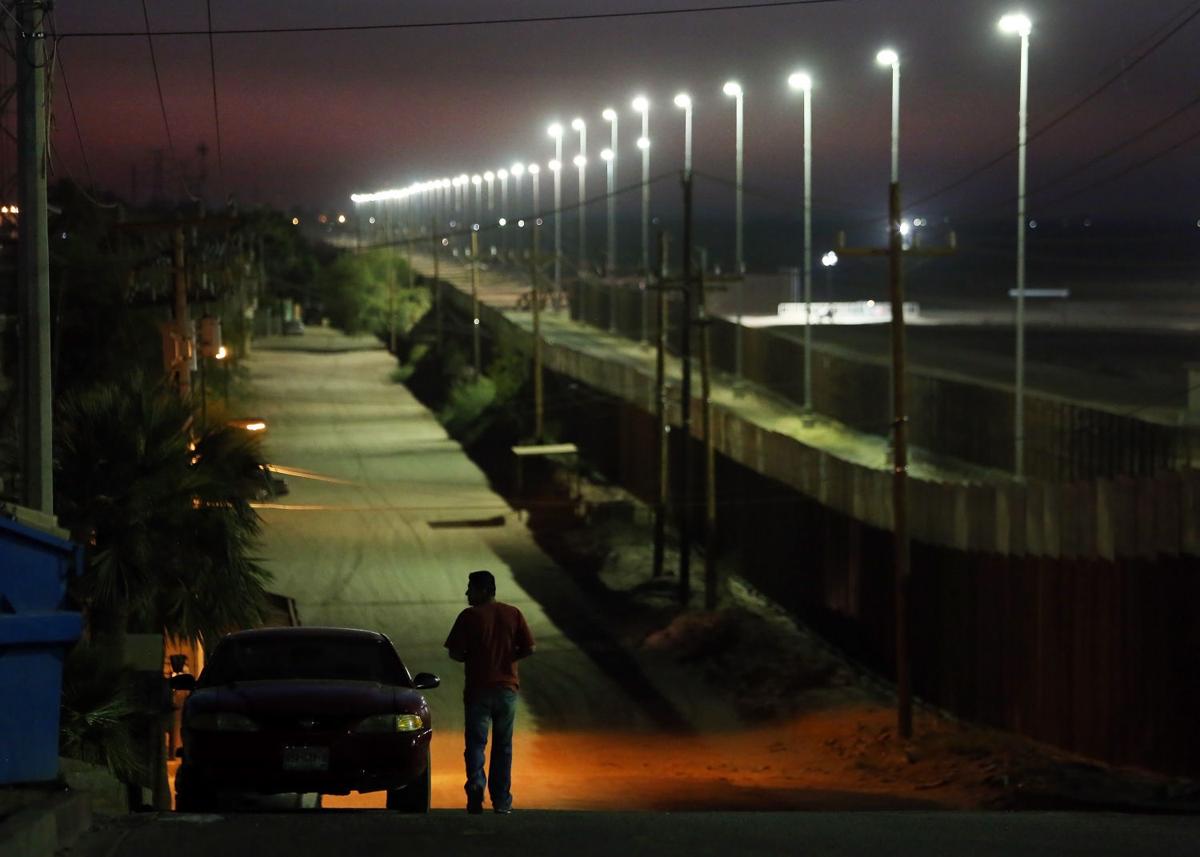 The border fence near San Luis Rio Colorado, Sonora, is part of the Yuma Sector of the Border Patrol, which has seen 700 claims of family fraud. 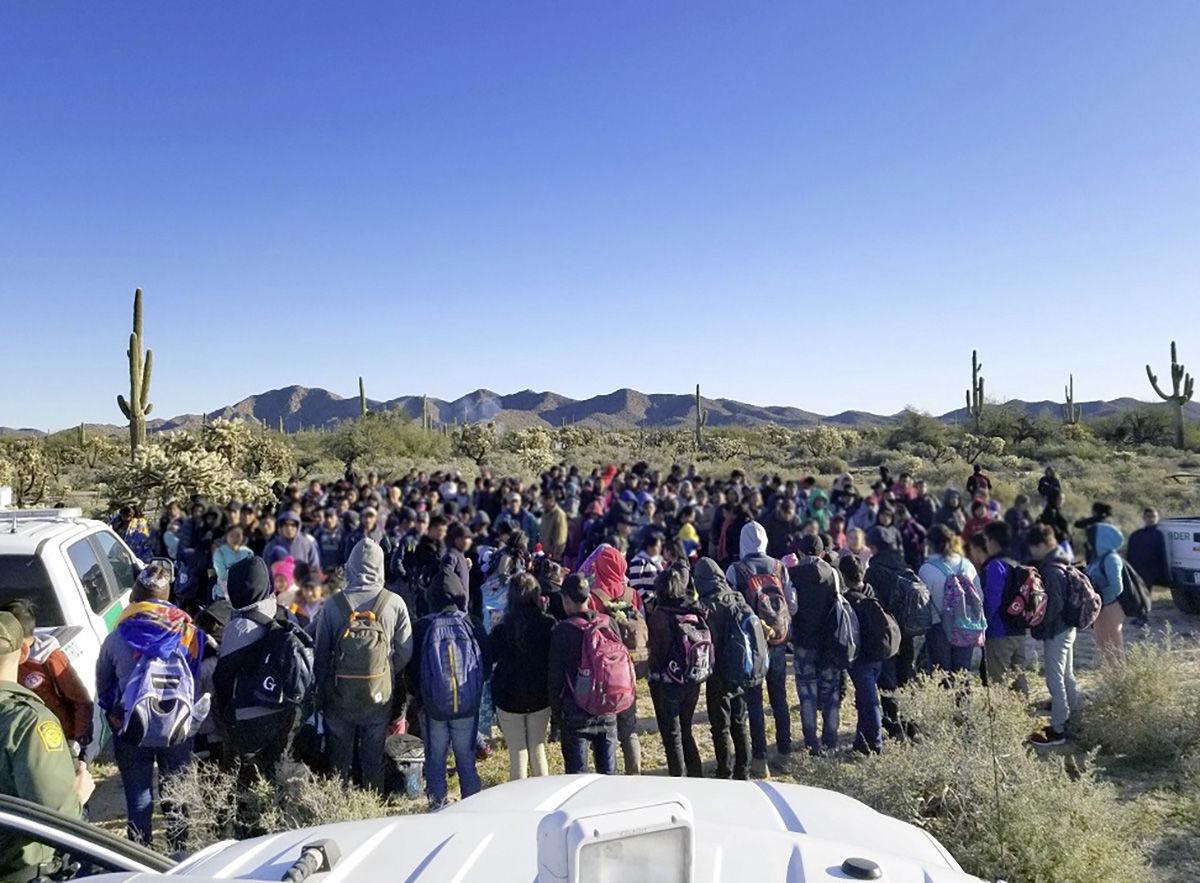 Some migrants pretend to be family units because they are told by smugglers that makes it more likely that they will be released in the United States.

As thousands of migrant families from Guatemala, Honduras and El Salvador seek asylum in the United States, federal agencies in Southern Arizona are turning their attention to migrants who pose as families to better their chances of being released from custody.

Soon, HSI will start a pilot project at two border cities to take biometrics of children if special agents suspect the children are being “rented” out by smugglers, HSI officials said.

The family fraud claims amount to a small portion of migrant families that cross the border, surrender to Border Patrol agents and ask for asylum. The more than 700 fraudulent claims in the Yuma Sector came as 24,200 migrant family members were apprehended at the border near Yuma from October to March, according to Border Patrol statistics.

Borderwide, federal officials said they had seen about 3,100 fraudulent family claims since April 2018, alongside about 260,000 migrant family members.

The Tucson Sector reported about 6,750 migrant family members from October to March but declined to share information about fraud claims.

Federal officials did not provide specifics about cases of family fraud or how many were referred for prosecution. The Arizona Daily Star searched federal court records in Tucson and Yuma and found 53 prosecutions involving those claims since June 2018, along with 15 cases of adults using fraudulent birth certificates to claim to be minors.

For the most part, the family fraud cases found by the Star occurred near Yuma and were treated as misdemeanors. All but three cases led to quick guilty pleas for illegally crossing the border and ended with prison sentences ranging from a few days to about six weeks.

In a recent case, a Guatemalan man used a false birth certificate on Monday in an attempt to show Border Patrol agents near San Luis he was the father in a family. He was sentenced on Tuesday to 15 days in federal prison, court records show.

In an Aug. 30 case, a pair of Mexican men each paid $260 for authentic birth certificates belonging to a Guatemalan man and a Guatemalan minor with the same last name. The Mexican men walked into the San Luis port of entry, posing as the Guatemalans, and said they were headed to Nashville to look for work. They were sentenced to 20 days in federal prison, court records show.

In the most serious case found by the Star, a federal grand jury in Tucson indicted a Guatemalan man on human-smuggling charges on March 27.

Prosecutors said Maynor Velasquez Molina paid $130 to the family of an 8-year-old boy so he could pretend the boy was his son when they entered the United States.

Velasquez and the boy crossed the border west of Lukeville on Feb. 18 along with 101 other migrants, according to a criminal complaint. Velasquez showed Border Patrol agents a Guatemalan birth certificate to prove the boy was his son, but four days later agents determined the claim was false.

Velasquez paid the boy’s father in Guatemala 1,000 quetzales, or about $130, to use the boy to enter the United States, the special agent wrote. Velasquez also paid $130 to another person to make a fraudulent birth certificate for the boy.

Velasquez and the boy then traveled by bus to the U.S.-Mexico border, the special agent wrote.

Migrant families often are released on their own recognizance in Southern Arizona and told to meet with immigration authorities after they arrive at the residence of their sponsor, usually a friend or family member, elsewhere in the United States.

Individual adults, on the other hand, are more likely to face criminal prosecution or deportation.

In Tucson, more than 7,500 migrant family members have found temporary shelter at the former Benedictine Monastery since January, according to Teresa Cavendish, director of operations at Catholic Community Services of Southern Arizona, which runs much of the shelter program.

“We have not observed anything that raises red flags,” Cavendish said, noting that volunteers are required to report any indication an adult is posing as the parent of a child they don’t know.

While court filings in the misdemeanor cases offer relatively few details, two felony cases shed light on how fraudulent claims were made.

In May 2018, German Choc Cacao and Marleny Iqui Mac jumped over the border fence near Yuma and told Border Patrol agents they were a family. Iqui gave the agents a Guatemalan birth certificate indicating Iqui was Choc’s 15-year-old daughter.

At the time, the Trump administration was separating families when parents were prosecuted for crossing the border illegally. Choc was referred for prosecution and Iqui was taken into custody by the Office of Refugee Resettlement.

Suspicions arose that Iqui’s birth certificate may have been altered. The Guatemalan Consulate confirmed Iqui’s true date of birth made her 18 years old and she was not Choc’s daughter. In reality, Choc was her brother-in-law.

Choc later said he was told they would be able to stay in the United States if they said they were father and daughter.

They were charged with conspiring to make false statements to federal officials and possessing false identification with the intent to defraud the U.S. government.

With the aid of an Q’eqchi’ interpreter, they each pleaded guilty to the false statements charge, court records show. They both were sentenced to time served, Choc in December and Iqui in February.

In a case from April 2018, Adilso Monzon Calderon, 39, crossed the border near San Luis with 31 other Guatemalan citizens, according to a criminal complaint filed in July.

He told Border Patrol agents he was traveling with his son and showed them a Guatemalan birth certificate. He later admitted the boy wasn’t his son and told a special agent with HSI how they arrived at the border.

Before leaving Huehuetenango, Guatemala, Monzon contacted a friend of his who had traveled to the United States. That friend put Monzon in touch with a smuggling coordinator in Guatemala, who told him to “get a child to travel with and United States immigration would allow Monzon to stay,” the special agent wrote in the complaint.

“Monzon stated he did not want to take one of his own juvenile children for fear that members of the 18th Street gang would see that a child was missing and possibly do harm to his family if they thought Monzon was trying to flee Guatemala,” the special agent wrote.

The son of the friend near San Francisco was about the same age as Monzon’s son, so the smuggling coordinator told Monzon to use the birth certificate of Monzon’s son.

In late April 2018, the mother of the boy met Monzon at a bus stop near the Guatemala-Mexico border. The woman “handed the juvenile to Monzon and informed him that he was to take care of the child,” the special agent wrote.

About 400 people were waiting at the Guatemala-Mexico border and about 120 of them, including Monzon and the child, got onto three buses. Nearly all were traveling with children.

Monzon said he borrowed money to pay his half of the $5,000 smuggling fee to get to the United States. The family of the boy paid the other half, the special agent wrote.

In late June, the boy corroborated Monzon’s story, the special agent wrote. The boy said he was “coached to memorize the information” on the birth certificate belonging to Monzon’s son and told what to say to Mexican authorities if they stopped the bus in Mexico.

Monzon was charged with human smuggling and identify theft. He pleaded guilty to the human-smuggling charge.

Public to see migrant kids' drawings, get a personal view of their journeys

The decline is “directly attributable to our international partnership efforts," the Homeland Security chief said Thursday in a visit to the Yuma area.

The border fence near San Luis Rio Colorado, Sonora, is part of the Yuma Sector of the Border Patrol, which has seen 700 claims of family fraud.

Some migrants pretend to be family units because they are told by smugglers that makes it more likely that they will be released in the United States.