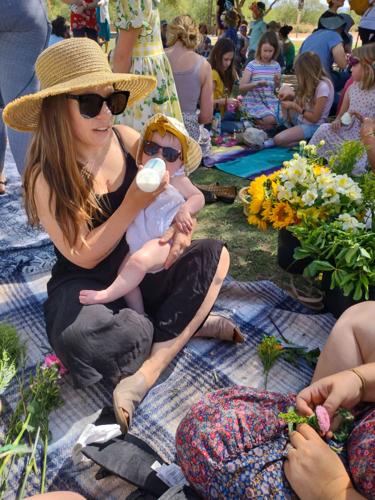 Serena Gustafson feeds Amelia at Tucson’s Rio Vista Park on May 1. Amelia, who is 7 months old, needs specialized formula because of food allergies. 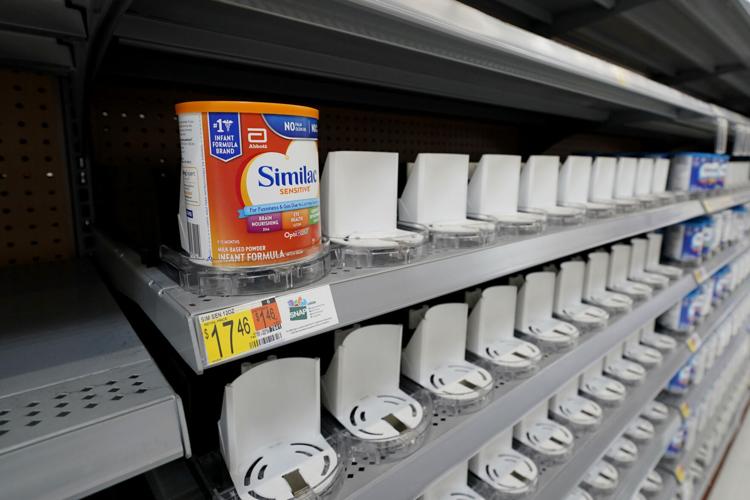 Serena Gustafson knows the awful stress of having an infant to feed but not being able to rely on stores for her food.

Gustafson’s daughter has significant food allergies and needs specialized formula to help her grow, but a nationwide shortage has made it challenging to find the brand they need.

“She wasn’t gaining weight, she was miserable for months but now that she’s on this (brand), she’s thriving,” Gustafson said of changing 7-month-old Amelia to an amino-acid based formula called Elecare in late December. The switch was advised by her pediatrician, Dr. Nicole Abdy with Mesquite Pediatrics.

Amelia was finally free of stomach pain and the reflux improved tremendously, until February.

That’s when there was a recall of certain formulas manufactured by Similac, Alimentum and EleCare. The recall included the shutdown of an Abbott Nutrition processing plant in Sturgis, Michigan, following the hospitalization of four infants sick from a rare bacteria that reportedly came from formula produced at the plant. Two of those infants died.

As of last week, national news reports show, the out-of-stock rate for formula nationwide reached 43%. Photos from stores around the country show near empty, or empty, shelves of infant formula. Short supplies are also happening in Tucson.

President Joe Biden met last week with manufacturers and retailers to find ways to increase supply. Abbott said this week that it could restart production in the coming weeks and get formula back on shelves within two months.

The recall compounded a national shortage of formula that started in October, a supply chain problem tied to the pandemic, said Pima County’s WIC Dietetics Services manager, Monica Nicholas. WIC stands for Women, Infants and Children and is a federal program to help infants and children up to age 5 at risk of inadequate nutrition.

What makes it harder for WIC recipients here is that Arizona’s computer systems are set up for WIC card holders to get the same kind of formula they have typically used, but with the shortages, that’s not necessarily what’s available.

In order to buy another of the three main brands — Enfamil, Similac and Gerber — they need to change their card. And lately, these brands have been harder to find while the generic store brands are available, but not approved for WIC purchases.

Making changes to allow the purchase of generic brands would require the state to update its computer system. There are more than 100 store brand formulas that would need to be added.

The WIC Program has been working to expand options as they become available, said Steve Elliott, a spokesman for the Arizona Department of Health Services.

Elliott said store brands currently aren’t available through WIC, but they are exploring the possibility of adding them. In the meantime, he said they are working with families to help them locate alternatives. People needing help can call a state WIC helpline at (866) 927-8390 or email azwicshoppershelpline@azdhs.gov.

“At this time, families may need to visit a number of stores to get alternative formulas,” Elliott wrote in an email to the Arizona Daily Star. “If families have concerns about their infants’ nutrition, they should contact their pediatricians.”

For Gustafson and her husband, the recall on Elecare meant switching to a Neocate product, but that’s also been very hard to find.

The couple solicited help from friends and family, in Arizona and out-of-state. Initially, it was a matter of finding one can at one Walgreens here and another couple from a store near a friend up in Phoenix.

“We were trying to find formula everywhere,” Gustafson said of those first weeks. “We got a couple cans thanks to friends and calling around but it was very, very limited and very, very hard to find.”

Gustafson eventually found some online and immediately purchased what she could, which amount to a couple cases. That’s just four cans per case, with one can lasting about three days.

Price-gouging also started, she said, with some charging $40 a can or even $70. There are websites charging over $200 for four cans, she said.

“Everyone is stressing out,” she said of an online parenting site she joined for support with Amelia’s health challenges. “How are we going to feed our babies?”

Some WIC recipients haven’t been able to use their cards on formula for months. Instead, they might buy formula with cash, or use food stamps.

The food stamps, as they’ve been historically called, are part of the state’s SNAP program, which stands for Supplemental Nutrition Assistance Program. Until the end of April, many families were receiving extra SNAP funds, which helped with buying formula, but that allotment ended after the state’s COVID-19 emergency services ended in March.

Households receiving the maximum SNAP benefit for their household size were receiving an extra $95 each month, said Tasya Peterson press secretary for the state’s Department of Economic Security.

Some families are offering their infants cow’s milk, which Nicholas said is not advised before the baby turns a year old. Others are introducing solid foods sooner than they would have.

If people do try to buy online, get it from the retailer, she said, not a third-party seller who might be offering an expired product.

As of March, there were 2,300 infants enrolled in the county health department’s WIC program and about 1,500 of them are fully formula fed, said Jennifer Chancay, deputy division manager with the county’s Community Outreach, Prevention & Education. About 500 are breastfed and also formula fed, while 300 of the infants are fully breastfeeding.

Marana Health Care also runs a WIC program and so does El Rio Health, which currently has a monthly WIC caseload of about 4,200 to 4,600, including not only formula-fed infants but also pregnant, postpartum and breastfeeding participants as well as children up to age 5.

“We’ve never seen anything like this before,” Nicholas said. “It’s very stressful.”

If you are unable to locate infant formula provided through WIC, the Arizona Department of Health Services recommends calling your local WIC clinic for assistance.

Arizona WIC recipients may also contact the AZ WIC Shopper Helpline at (866) 927-8390 from 7 a.m. to 7 p.m. Monday through Friday, or from 8 a.m. to 1 p.m. on Saturdays. You can also email azwicshoppershelpline@azdhs.gov. Staff will help find  alternative infant formulas.

The Arizona Department of Health Services recommends the following:

Partnership to provide in-home care for some Tucson patients

A collaboration between Tucson Medical Center and DispatchHealth to bring in-home care to recently hospitalized patients and in-home urgent care to some residents.

Study: Signs of cancer, disease can show up early in a firefighter's career

Biological changes can take place relatively early in a person's career, depending on the number of structural fires attended and the length of time spent fighting these fires, a study by the University of Arizona shows.

Climate change appears to be bringing about longer allergy seasons

Springtime blooms are beginning earlier while summer and fall weeds and grasses are living longer, according to a recent study.

The two providers will partner to allow El Rio to create a federally qualified center at The Abrams Clinic, 3950 S. Country Club Rd, on Tucson's south side.

Veterans, like families, are struggling to afford housing as Tucson's rental market costs continue to climb.

Donald Trump sues CNN for libel, slander over claims they hurt him politically

Serena Gustafson feeds Amelia at Tucson’s Rio Vista Park on May 1. Amelia, who is 7 months old, needs specialized formula because of food allergies.