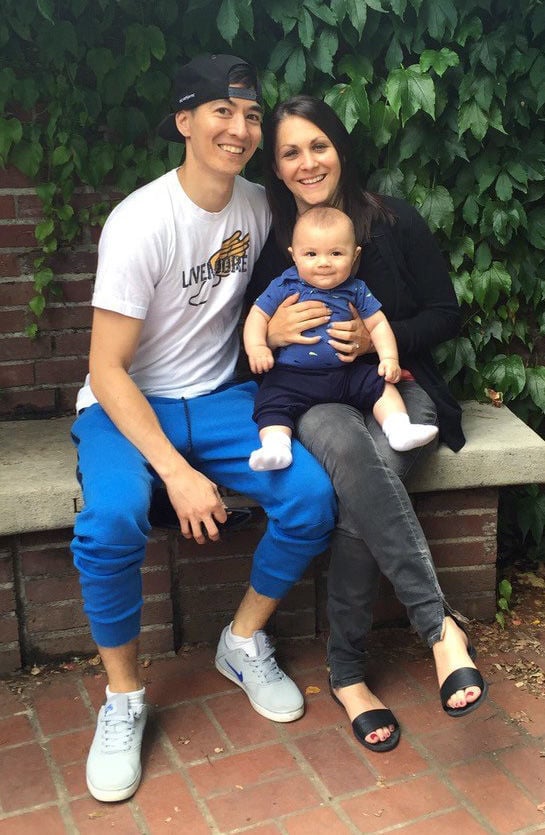 Nikki Moore wants to start more conversations about colorectal cancer in hopes others will have the opportunity to fulfill the dream of her husband, Matt, to live more. 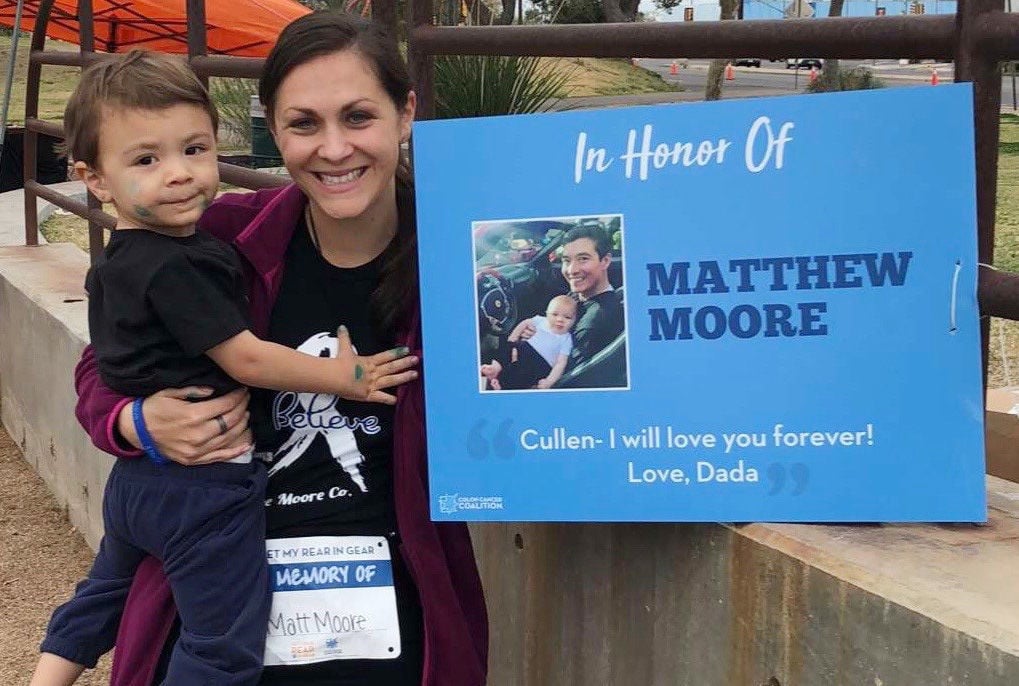 Nikki Moore are her son, Cullen, are among more than 700 volunteers who participated in the annual Get Your Rear in Gear—Tucson 5K Run and Walk to benefit the Colon Cancer Coalition last year.

In a perfect world, Nikki Moore would want a little bit more: More time with her husband, Matt, and their son, Cullen.

Since she can’t have that, she wants more recognition of the fact that relationships are life’s biggest priority and acknowledgement that the ability to live in the present and enjoy the moment is life’s greatest gift — both lessons that she and Matt learned firsthand after he was diagnosed with stage 4 colorectal cancer in 2015 at age 32.

Equally as important, she wants to start more conversations about the disease in hopes others will have the opportunity to fulfill Matt’s dream to live more.

“Matt was a lifelong athlete who played soccer four times a week and worked out six days a week and we didn’t really know about his family history until after he died. We knew Matt’s grandfather had colon cancer, but we didn’t learn until later that his grandfather, who was one of 14, also had three siblings with colon cancer. So that is my big thing: Really understanding your lineage and your family history with colorectal cancer and if you have family members with polyps, understanding the need for screening. I want to take away the stigma around these conversations and make sure that people get screened,” said Nikki, the local event director for the Colon Cancer Coalition’s Get Your Rear in Gear — Tucson 5K Run/Walk on Sunday, Feb. 23, at Omni Tucson National Resort.

The native Tucsonan met Matt when they were students at NAU. After graduation, the two moved to Portland, Oregon, where Nikki earned her master’s degree in marriage and family therapy from Lewis & Clark College, and Matt worked as a financial adviser.

After marrying in Tucson on March 30, 2014, they made the Pacific Northwest their home; they had decided to start a family when Matt began to notice fatigue and back pain.

“He wasn’t his happy-go-lucky self and he had cramps and changes in his bowel movements, which he wrote off as work stress until he started having blood in his stool. He thought then that something was wrong,” said Nikki.

Matt went in for a checkup and was diagnosed with hemorrhoids, but his concerns persisted.

“As an athlete, he was so in tune with his body and he felt something was off. Finally, they scheduled a colonoscopy and the doctor walked in and said, ‘I am shocked. He has colon cancer.’ It had spread to his liver and was stage 4 and they were unable to operate and I was seven months pregnant. Our whole world flipped upside down in an instant,” said Nikki.

The Moores were stunned on several levels: First of all, they were surprised to learn that colorectal cancer is the third most commonly diagnosed cancer and the second leading cause of cancer deaths among men and women according to the American Cancer Society; and secondly, those diagnosed at stage 4 have only a 14% five-year relative survival rate, as opposed to 90% for those diagnosed at stage 1 or stage 2.

“The more that I advocate within this realm, this is a repeating story: Young, active people are suddenly diagnosed out of nowhere. The scary part is that when young people are diagnosed, the symptoms often come at later stages, which decreases their chance of survival long term, so that is why advocacy, screening and awareness are so important. Colon cancer can really be a preventable disease,” Nikki said.

Matt started chemotherapy nine days before Cullen was born and, with the support of family and friends, began to battle the disease.

Even during this difficult time, the couple remained optimistic and open to new opportunities: Matt’s search for a soft t-shirt to wear during treatment led to his own design, so they started a lifestyle apparel brand called the Live Moore Co. with a mission to “inspire others to be present, engage in acts of kindness and to always Live Moore!”

“Matt was fighting for his life. We didn’t know how much time we had together and that is where LiveMooreCo.com came from. We wanted to take the lessons we were learning from cancer and share them with the world in hopes that others could learn without having some sort of health crisis. We learned to be present and reprioritize our time with each other, and so many people engaged in amazing acts of kindness to us that we wanted other people to know what it was like to experience that deep kindness,” said Nikki.

Matt’s “Live Moore Challenge” encourages others to pay it forward by giving back in any way that is personally significant. The challenge has resulted in everything from a walker donation for a homeless Portland, Oregon, man to $7,400 in food donations for the Denver Rescue Mission and more than $30,000 in donations to various colon cancer charities.

Nikki knows that Matt, who lost his battle to cancer in April 2017, would be gratified to see the impact of the challenge. “He really wanted to inspire others to take the life they were given and live each day to the fullest,” she said.

As part of Matt’s legacy, she has modeled that concept through her advocacy with the Colon Cancer Coalition at events in both Portland and Tucson, where they moved before Matt’s death so Nikki and Cullen could be near family.

Nikki is thrilled that funds raised at the upcoming Tucson walk — which will serve as the kickoff for the Tucson Conquistadores Cologuard Golf Tournament — will benefit local education and colon cancer screenings for at-risk patients through El Rio Health Center.

Over the past three years, the walk has raised $52,985 to aid uninsured El Rio patients.

“This fund is utilized for uninsured El Rio patients who have completed an at-home colon cancer screening test kit and results were positive. These uninsured patients now need a higher level of care outside of El Rio to see why the tests came back positive. We are very blessed to have a wonderful relationship with Tucson Gastroenterology Specialists and other partners and the funds donated pay for colonoscopies for these patients,” said Brenda Goldsmith, executive director of the El Rio Health Center Foundation.

Goldsmith said that in 2018, donations helped to fund 38 colonoscopies for uninsured patients; in 2019, that number jumped to 75. The average age of those who received colonoscopies was 59.

Goldsmith said El Rio has mirrored the state of Arizona in emphasizing the importance of screening for colorectal cancer; those who wish to make a gift to directly support the cause can also make a donation at elrio.org

“When we started working with the Colon Cancer Coalition, our screening rate for patients who were eligible based on their age was 53%. Last year, it had increased to just over 65% of eligible patients who had been screened. This is a needle the country has had a very hard time moving, and we are very pleased with these results. They lead to peace of mind, as opposed to people discovering colorectal cancer when it is further along and they don’t have as many options,” Goldsmith said.

Ultimately, Nikki encourages people to consider screening and not statistics.

“Lots of times we see statistics, but when you look at us, we are the family behind those numbers. Hopefully people will hear our story and say, ‘Wow. I understand why this is important. I will get screened for my kids or my partner or my grandkids,’” she said.

Get Your Rear in Gear—Tucson 5K Run/Walk

The event includes opportunities to form a team, race as an individual, join as a virtual racer, support a team or make a donation toward the event. Festivities will a 5K run and a 5K walk, medals for winners, post-race refreshments at the 19th Hole Pavilion and educational information about colorectal cancer. The event also includes a general admission ticket to the Cologuard Classic featuring a 78-player field. To register online or for more information, visit donate.coloncancercoalition.org/tucson or send an email to getyourrearingeartucson@gmail.com.

Participants are also welcome to join Team Live Moore at tucne.ws/1e83 or donate to the team if unable to walk.

Audio recordings of publications offered to clients for free.

Each glass artist must complete a work of art within a 60- or 90-minute timeline.

Mr. An to be recognized by Gootter Foundation for his philanthropy

Over the past four decades, Kwang C. An — best known as “Mr. An” — has become synonymous with food and philanthropy in Tucson.

Southern Arizona's top volunteers to be honored at awards breakfast

Volunteers, businesses and community groups will be recognized.

The local group is among the oldest clubs in the United States.

There are at least 14,000 people living with Multiple Sclerosis in Arizona.

Since 1983, Angel Charity has provided nearly $28 million to 87 local agencies and nonprofits.

Nikki Moore wants to start more conversations about colorectal cancer in hopes others will have the opportunity to fulfill the dream of her husband, Matt, to live more.

Nikki Moore are her son, Cullen, are among more than 700 volunteers who participated in the annual Get Your Rear in Gear—Tucson 5K Run and Walk to benefit the Colon Cancer Coalition last year.