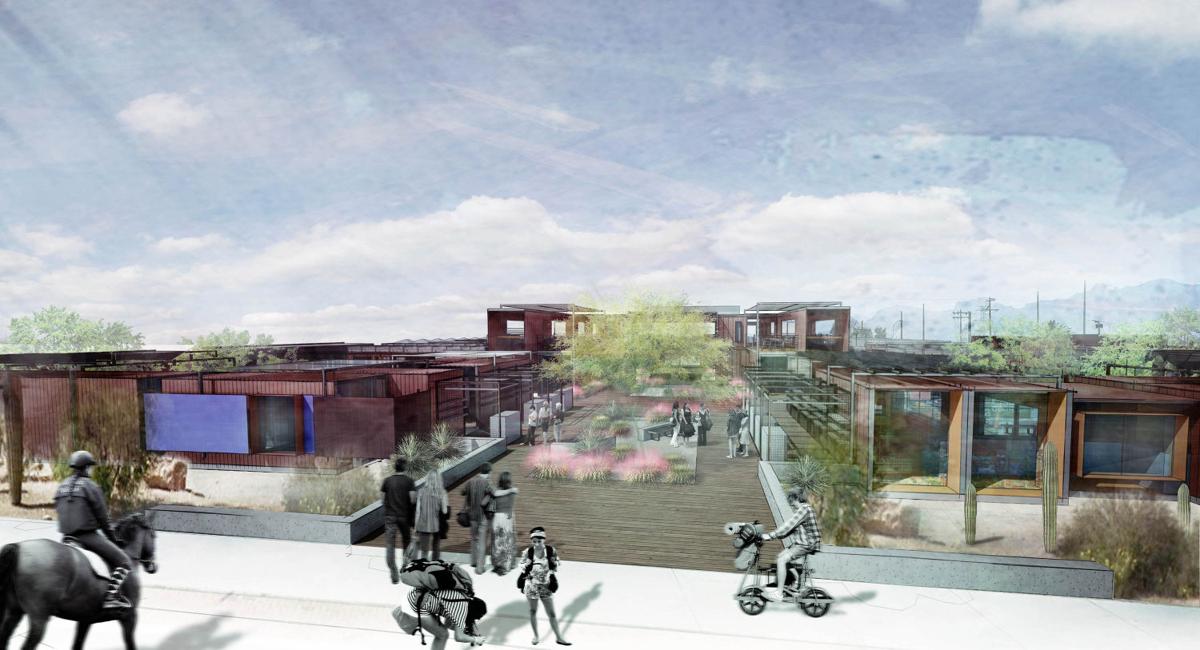 An artist’s rendering of the Mercado San Agustin Annex. Courtesy The Gadsden Co. 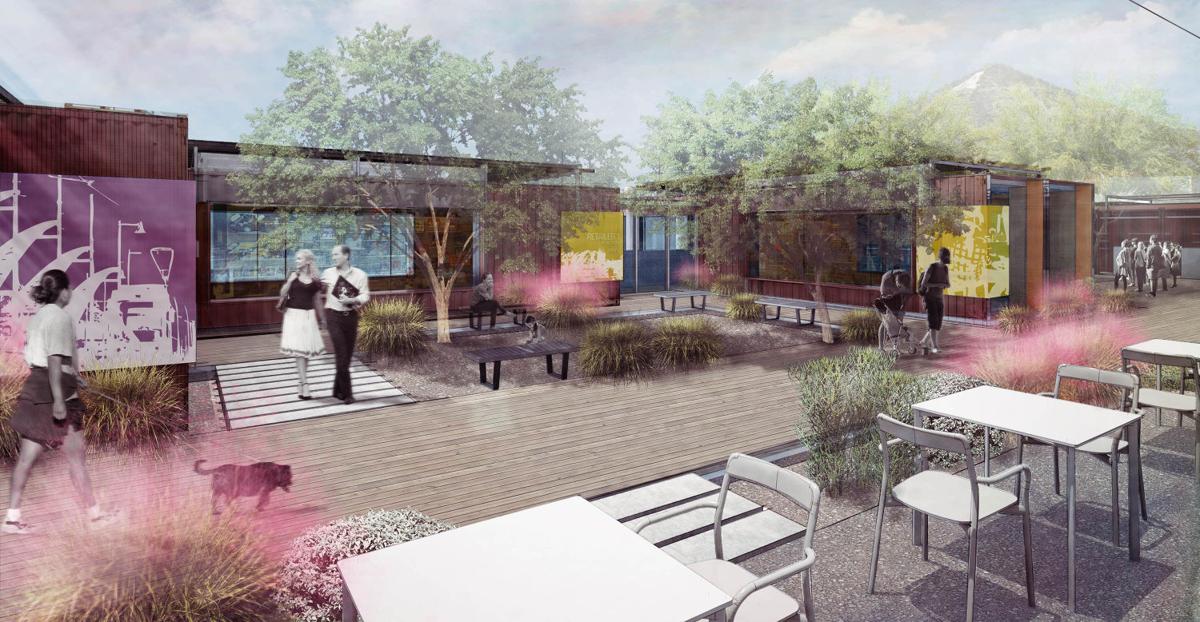 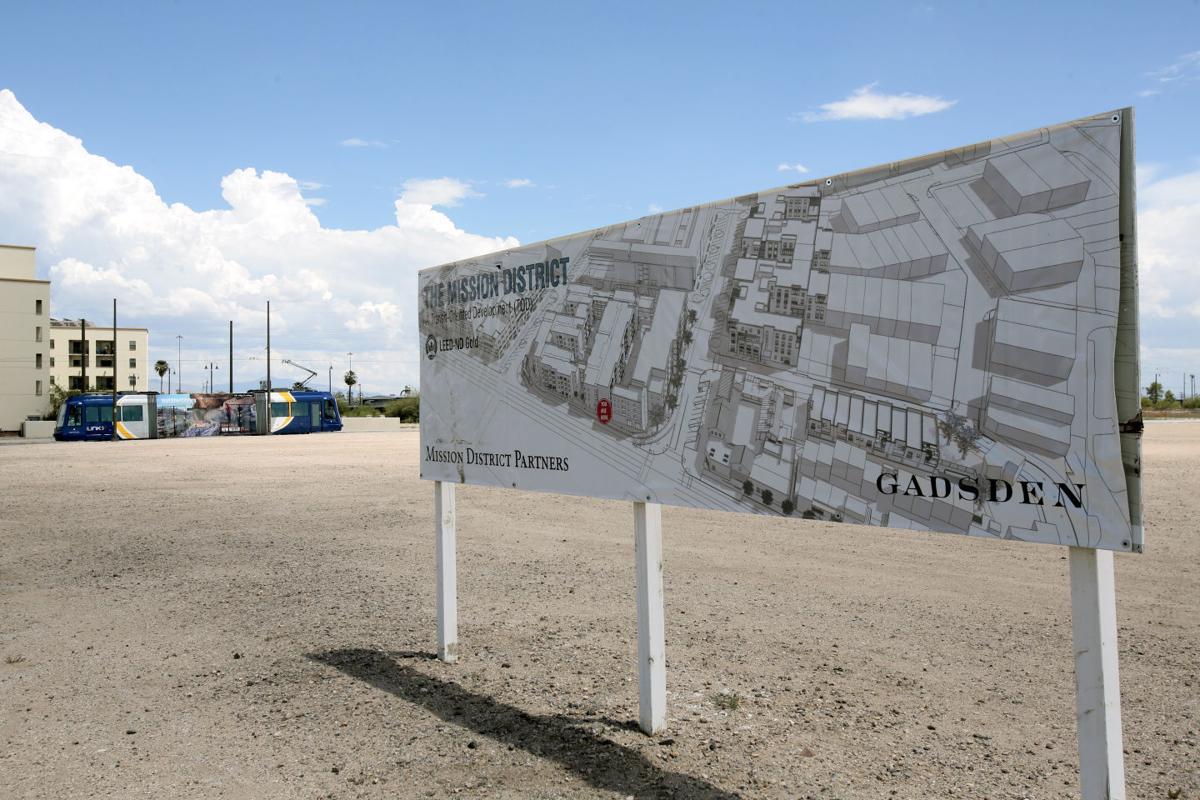 The city of Tucson has removed itself from the business of developing an extension of the downtown area west of Interstate 10 after eight years.

For $1.2 million, Rio Nuevo is buying out the city’s stake in a 2008 development agreement with The Gadsden Co. to do projects on land south of Congress Street and west of Interstate 10 and the Santa Cruz River.

That’s the amount the city could have received if it decided developer Gadsden Co. had defaulted on a performance bond tied to the agreement. Gadsden executives said they would have taken the city to court if it had tried to foreclose on the project.

Gadsden has been trying to develop the property since 2008, when the company agreed to buy and develop the land in phases. But many of its plans fell through in the recession and it has struggled to get the government tax credits and financing it said it needed to develop housing on the site.

Rio Nuevo, a special taxing district whose purpose is to develop downtown Tucson, offered to assume the city’s development agreement with Gadsden.

Rio Nuevo will take ownership of the property and lease it to Gadsden. New retail tenants who move in will contribute new sales tax revenue to Rio Nuevo.

Rio Nuevo chairman Fletcher McCusker said the development agreement comes with a non-negotiable timeframe to build the projects. If Gadsden doesn’t get it done, Rio Nuevo would own the property and would get another developer on board.

Mercado to be expanded

Rio Nuevo also is investing $2.2 million in a $5 million project to expand Gadsden’s Mercado San Agustin, a Mexican-style plaza with a central courtyard, shops and restaurants in the Menlo Park neighborhood.

The project probably wouldn’t be built without Rio Nuevo, because the chance to get financing was “not too strong,” said Jerry Dixon, chairman of The Gadsden Co.

The Mercado San Agustin Annex will be constructed in six to nine months, beginning in September.

It will be built on 1.5 acres with 20,000 square feet of rentable space inside 53 shipping containers arranged in a way that creates “cool gathering spaces,” Dixon said.

The container buildings — chosen partly for the cool factor and partly as a placeholder for something bigger and better years down the road — would be connected by wooden decks around landscaped courtyards, he said.

All spaces are pre-leased and include a beer shop, a bike shop near a future city bike-share kiosk, a restaurant and a coffee shop, said Adam Weinstein, president and CEO of The Gadsden Co.

The project also will include a 500-seat outdoor event space with a stage, with Flam Chen as the tenant and resident theater company. The space could be used as a play area when it’s not being used as seating.

One streetcar stop is on the south boundary of the Annex project and another could be built to the east of it in the future.

The regional headquarters of Caterpillar would be across the street to the south of the Annex.

That combination of commercial offices, retail and parks is a “game changer” for the west side, McCusker said, adding the west side is “becoming magical.”

Lenders have been skeptical about west-side projects, Weinstein said, but Rio Nuevo is acting as a catalyst, helped along by momentum in the multifamily housing market in the downtown area.

Gadsden plans to begin construction later this year on a $25-million project called The Monier, market-rate apartments with a plaza and a rooftop pool and more office and restaurant spaces. Gadsden will receive a loan through a HUD program that promotes urban infill and transit-oriented development projects.

While the city is out of the picture in the Gadsden plans, the city is still interested in the successful and mindful development of the west side and expects to see affordable housing, said City Councilwoman Regina Romero.

When the Tucson City Council approved the Rio Nuevo agreement Tuesday, it also directed the $1.2 million to be reinvested in west-side infrastructure and it recommitted to protecting the site of the future Tucson Origins Heritage Park, Romero said.

Romero said she hopes Rio Nuevo will match the funds, which could be used for infrastructure projects such as planting trees, building sidewalks or walking trails, protecting historic buildings, or creating interpretive signage. That kind of infrastructure will in turn attract more private investment, she said.

In the near future, city residents and visitors will be able to enjoy local history and take a walk along the river or up to Sentinel Peak or Tumamoc Hill as well as enjoying the retail and restaurant developments, she said.

“We have to remember that part of the attraction of Tucson and what Tucson is all about is that right there on the base of A Mountain we have more than 4,000 years of archaeology …,” Romero said, “and we have to make sure that that history of who we are and where our city was born is recognized.”

Higher ratings can help city get lower interest rates when it sells bonds.

Steller: West-downtown sites should progress in 2015

Development on four keys sites would make a major difference in downtown Tucson.

Ask yourself: "Who's got a record of getting things done?"

End of the line--All Souls Procession

Marchers in Sunday's procession reach the terminus along West Congress Street near the Mercado development.

The eight-story hotel will have 136 rooms. It will be the first new hotel built downtown since 1972.

An artist’s rendering of the Mercado San Agustin Annex. Courtesy The Gadsden Co.