This article was produced in a partnership between the Arizona Daily Star and the ProPublica Local Reporting Network, of which the Star is a member. ProPublica is a nonprofit newsroom that investigates abuses of power.

This story has been translated into different formats:

Drew Bolender is a grown man who likes weightlifting, video games and the band Green Day. He is perfectly capable of using the bathroom on his own. He just needs help getting there.

So when a manager from Arizona’s Division of Developmental Disabilities called his mother to suggest she put Drew in adult diapers to save the state the cost of overnight caregivers, she was outraged.

“You are going to ask an adult who is not incontinent to wear a diaper?” BJ Bolender asked.

At 41, Drew has blown past the life expectancy for a person with his condition. He was born with hydrocephalus and brain damage; over time, seizures further impacted his brain and left him requiring constant supervision. In 2017, he had spinal surgery. Since then he’s been in near-constant pain. He wakes as often as six times during the night, BJ said, asking to use the bathroom. He needs someone to escort him there safely.

BJ worried all summer about having to put a diaper on her adult son. She tried repeatedly to arrange meetings with the DDD manager to figure out how to keep the services she’d fought for years to secure.

Then, she received a new diagnosis for Drew: Alzheimer’s disease. BJ notified DDD as soon as she received the news in June. It took weeks to get a response.

The Bolender family’s experience echoes the stories of dozens of families interviewed about access to services for loved ones with developmental disabilities. As detailed in an article by the Arizona Daily Star and ProPublica, Arizona’s highly praised system for helping people with intellectual and developmental disabilities is showing signs of stress. Calls for help go unanswered. Bureaucratic procedures leave parents confused and exhausted. There are long waits for services to be provided.

In a statement, DDD officials said most of its clients get help quickly and are satisfied with care. They did not respond to specific questions about Bolender’s case.

The state system that is supposed to provide help to families who keep loved ones with developmental disabilities at home is still largely a mystery to her, even though she’s dealt with it for decades.

Drew lived in group homes for several years, but after battling to keep him safe, BJ moved him home in 2008. He’s lived there ever since. After his 2017 surgery left him unsteady and in pain, BJ was able to secure full-time care.

BJ’s first inkling that Drew’s caregiving hours might be cut came this past May, when she got the call from the DDD manager asking about why Drew couldn’t wear an adult diaper. After BJ grew angry at the suggestion, the manager told BJ he wouldn’t authorize Drew’s hours past mid-August, she said.

A video call was scheduled for Aug. 12, but neither the manager nor his supervisor, both of whom were supposed to attend, showed up, BJ said. The meeting was rescheduled for Sept. 18; the support coordinator appeared, but again, the manager did not.

At the end of September, DDD approved full-time care for Drew till Oct. 22, when they will reassess, BJ said.

“They are still questioning why we have overnight caregivers,” BJ said in a text.

In mid-October, she texted again to say that Drew’s services had been approved through December. Beyond that, the future is still unsure.

“Families get so overwhelmed and stressed out that they just give up and go away,” BJ said.

The threat of losing full-time care weighed heavily on BJ.

She had long played a role in his care. BJ has caught things on X-rays that the technicians don’t see, she said. She got Drew a medical marijuana card after even the strongest opioids stopped working to control his pain. When she’s not talking to doctors, she’s training staff, shopping, cooking, picking up prescriptions and tending to Drew herself as one of his paid caregivers.

“I got my doctorate in Drew a couple years ago. I had my master’s in Drew when he was a teenager,” she said.

But now she was faced with the possibility of having to stay up nights to keep Drew safe. BJ thinks about her own death a lot, she said, worrying about who will look out for her son when she’s gone. Drew has been talking about his own death, too.

During an interview he was friendly and talkative, with a wide grin and neatly combed light brown hair. He rubbed his stomach frequently. He had trouble forming words, and many of his sentences petered out before he was done with them.

Drew said that he wished to “stay alive as long as possible,” but he would like to be buried in a “gold casket” when he does die. He said he distracts himself from pain by playing games or watching YouTube. When he feels well enough, he lifts weights; he wore a white tank top that showed off impressive biceps.

BJ said that Drew has told her that he wants to donate his body to science when he dies, and that he asked her recently if she’d ever consider helping him with assisted suicide. 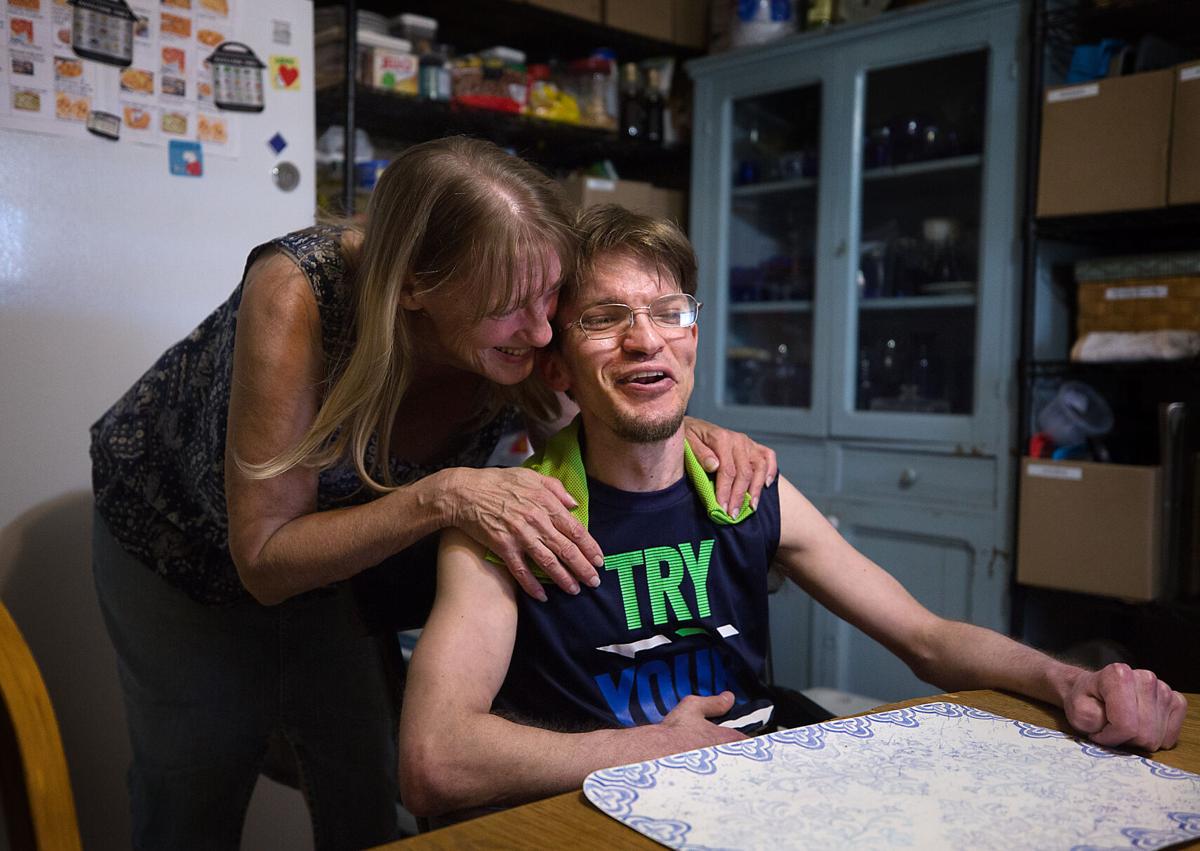 Drew Bolender, 41, with his mother, BJ, share a moment in their kitchen on July 30, 2020, in Phoenix, Ariz. BJ says Drew was born with severe brain damage, has epilepsy and was recently diagnosed with early onset Alzheimer's disease. Drew requires 24-hour care, seven days a week. 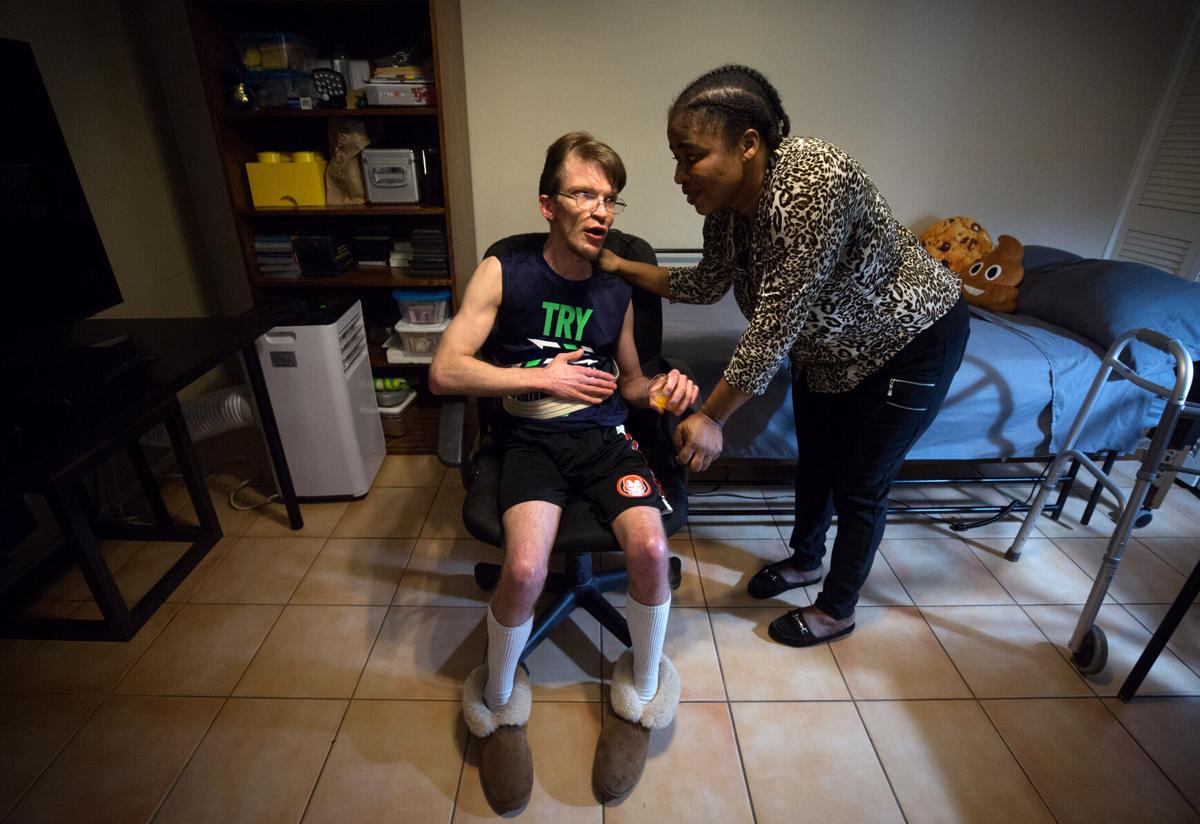 Drew Bolender, 41, talks with one of his caregivers, Gladys Jerry, in his bedroom on July 30, 2020. Drew lives in Phoenix, Ariz. with his mom, 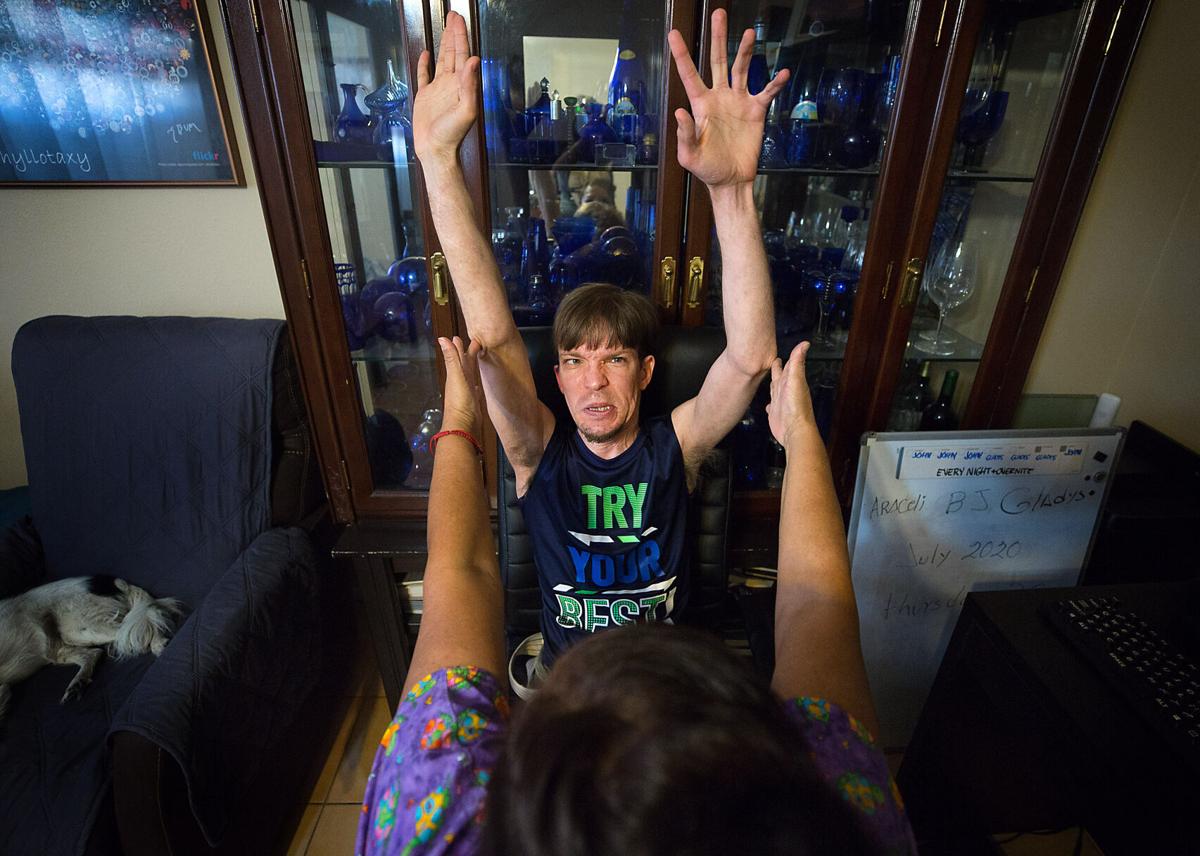 Drew Bolender, 41, performs an exercise and is guided by one of his caregivers, Araceli Rivera, in his living room on July 30, 2020. Drew lives in Phoenix, Ariz. with his mom, BJ. 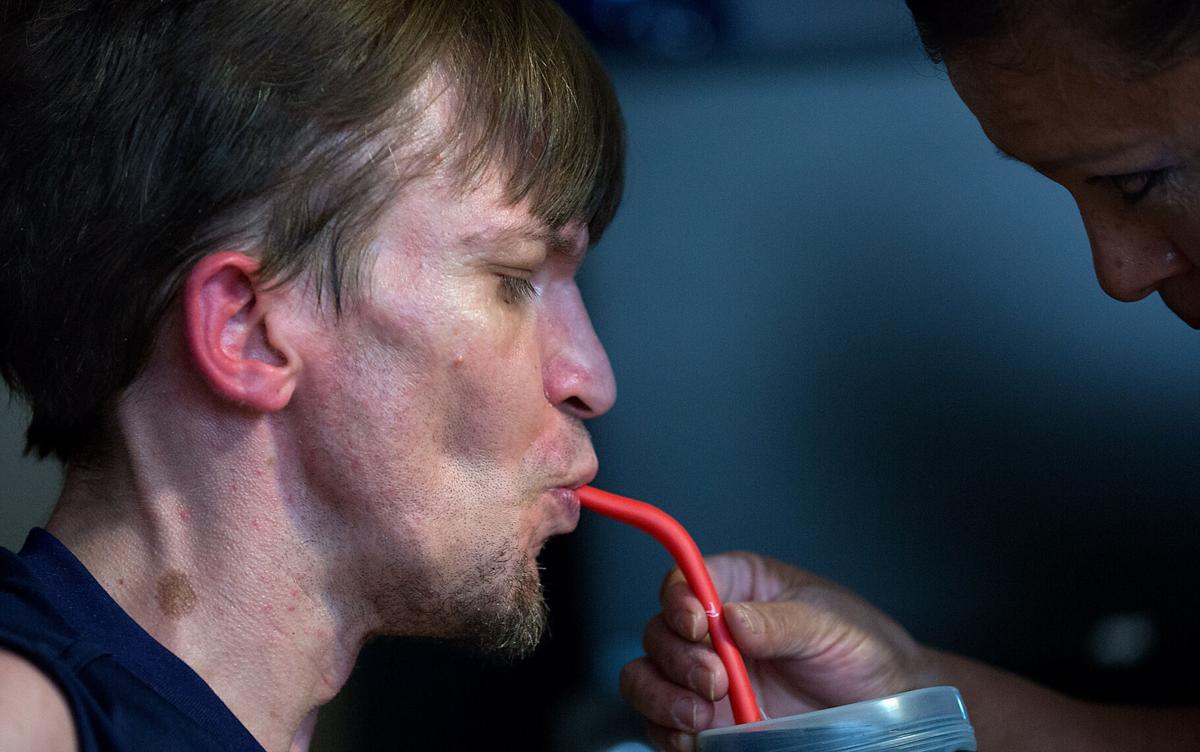 Drew Bolender, 41, takes a short break from his exercises and receives water from one of his caregivers, Araceli Rivera, on July 30, 2020. Drew lives in Phoenix, Ariz. with his mom, BJ. 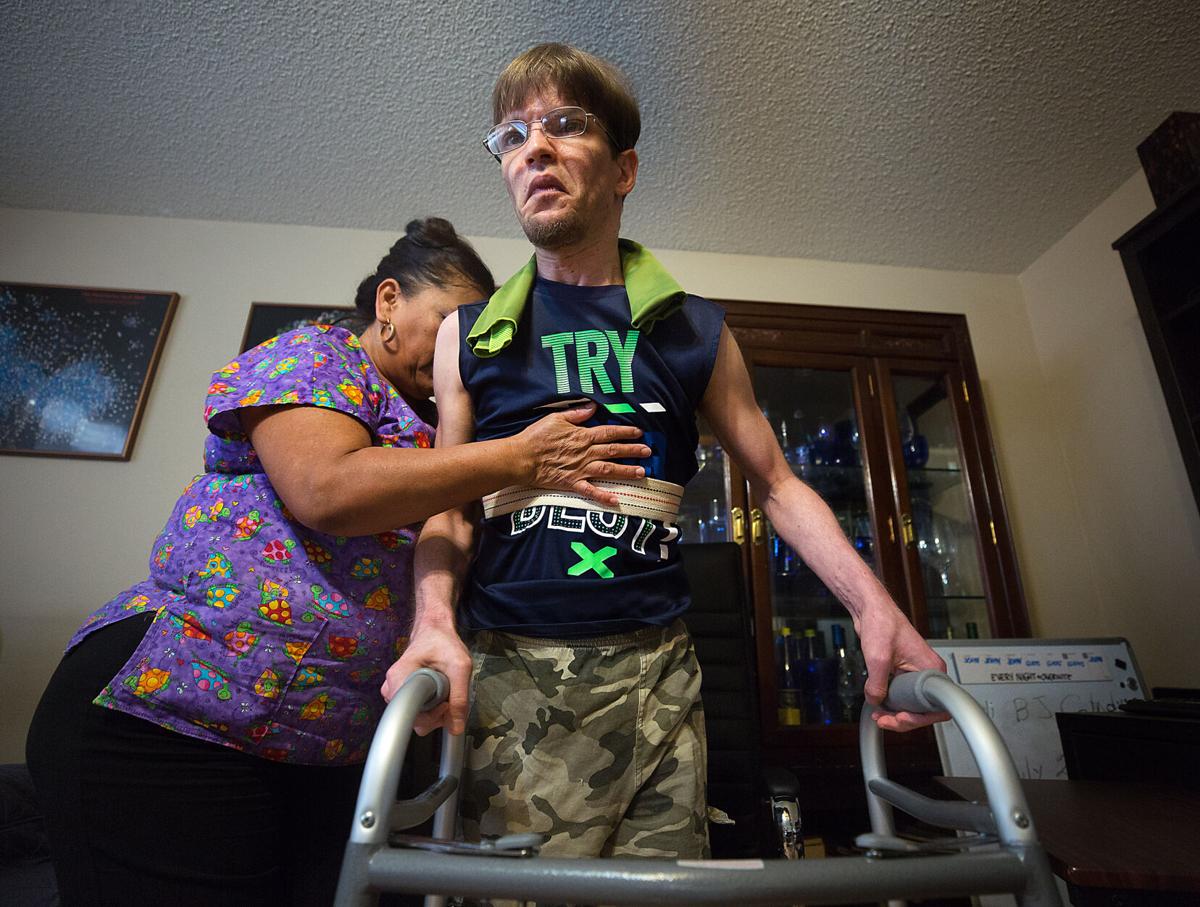 Drew Bolender, 41, moves to a more comfortable chair with the help of one of his caregivers, Araceli Rivera, on July 30, 2020. Drew lives in Phoenix, Ariz. with his mom, BJ. 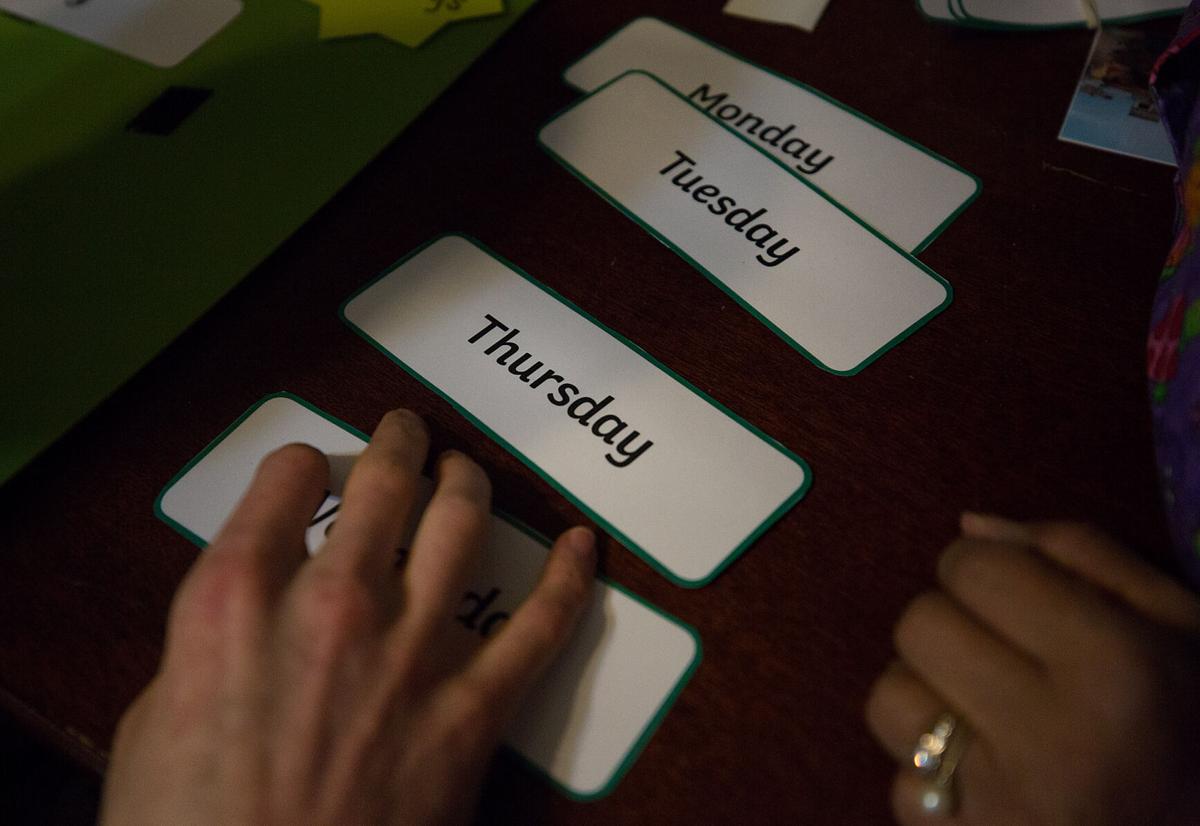 Drew Bolender, 41, was recently diagnosed with early onset Alzheimer's disease. As part of his routine, one of his caregivers will work with him on dates and days of the week. 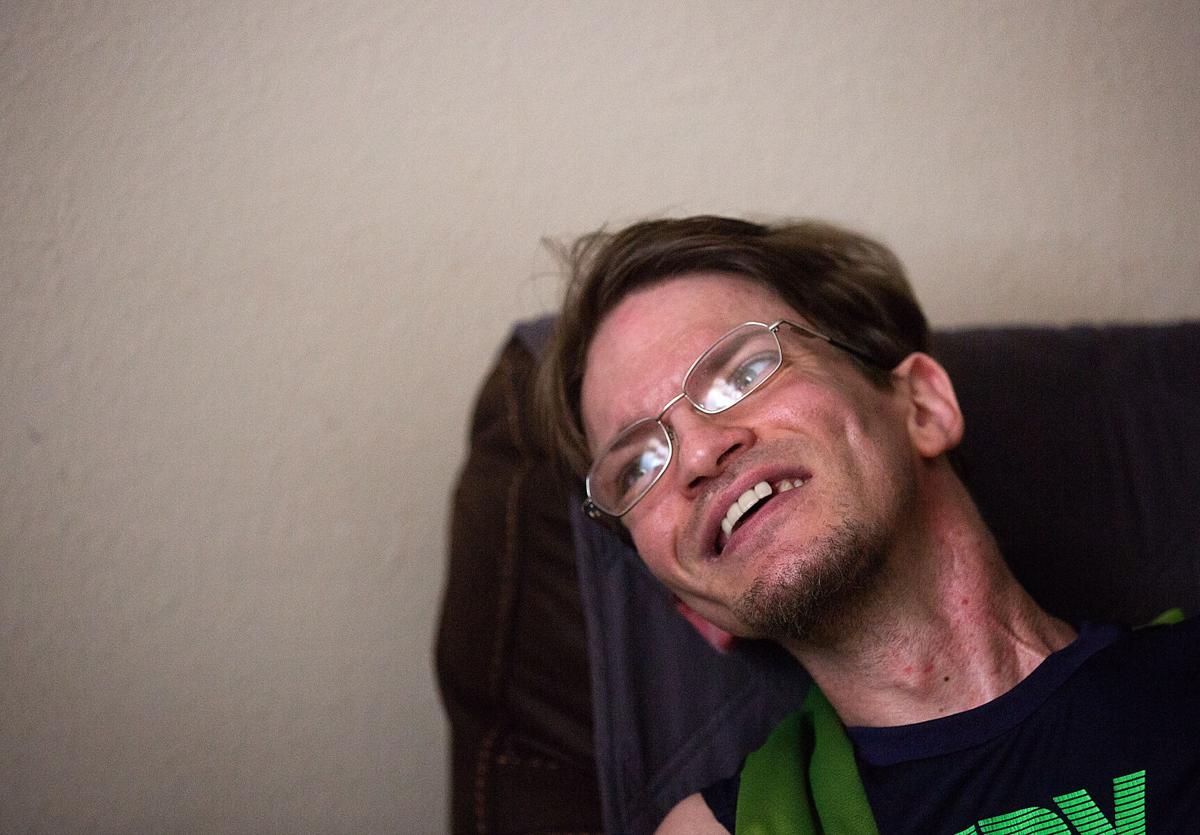 Drew Bolender, 41, lives in Phoenix, Ariz. with his mom, BJ. BJ says Drew was born with severe brain damage, has epilepsy and was recently diagnosed with early onset Alzheimer's disease. 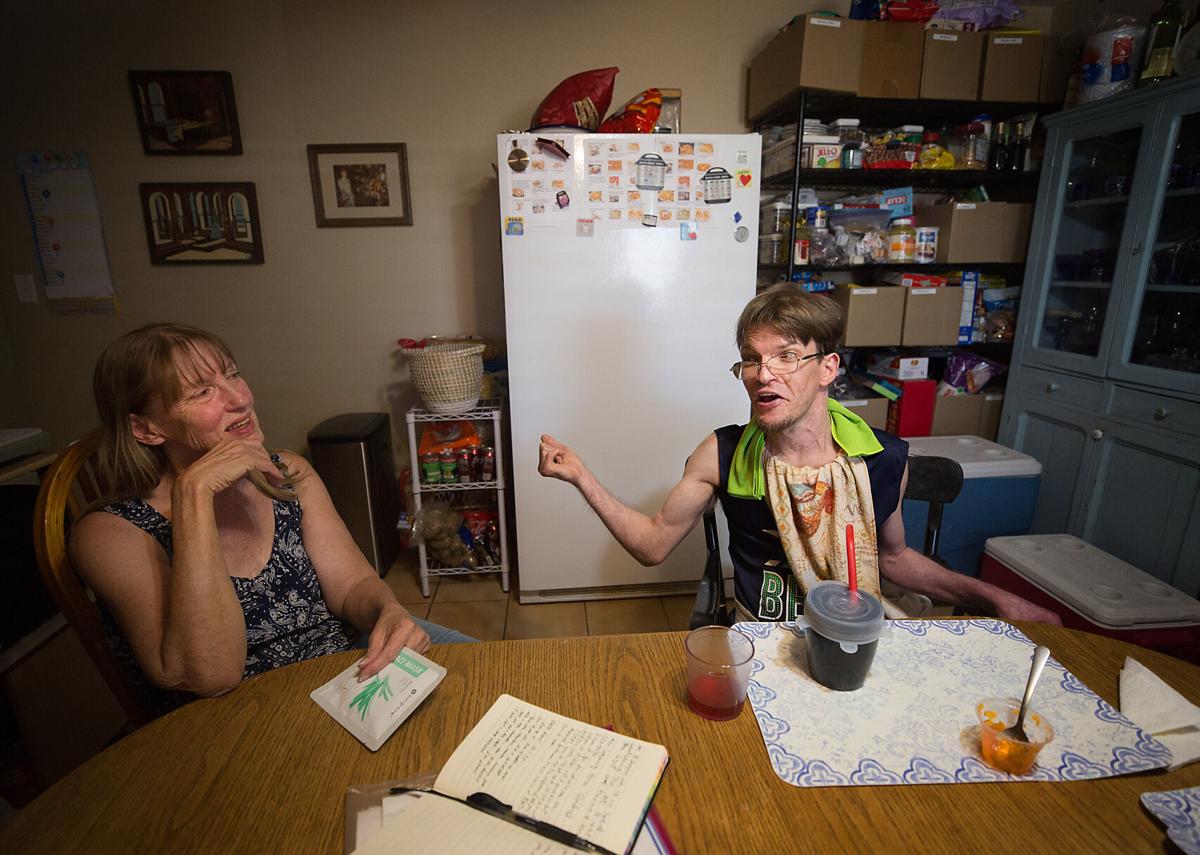 Drew Bolender, 41, with his mother, BJ, talk about music in their kitchen on July 30, 2020, in Phoenix, Ariz. Drew loves heavy metal music and one of his favorite bands is Guns and Roses. 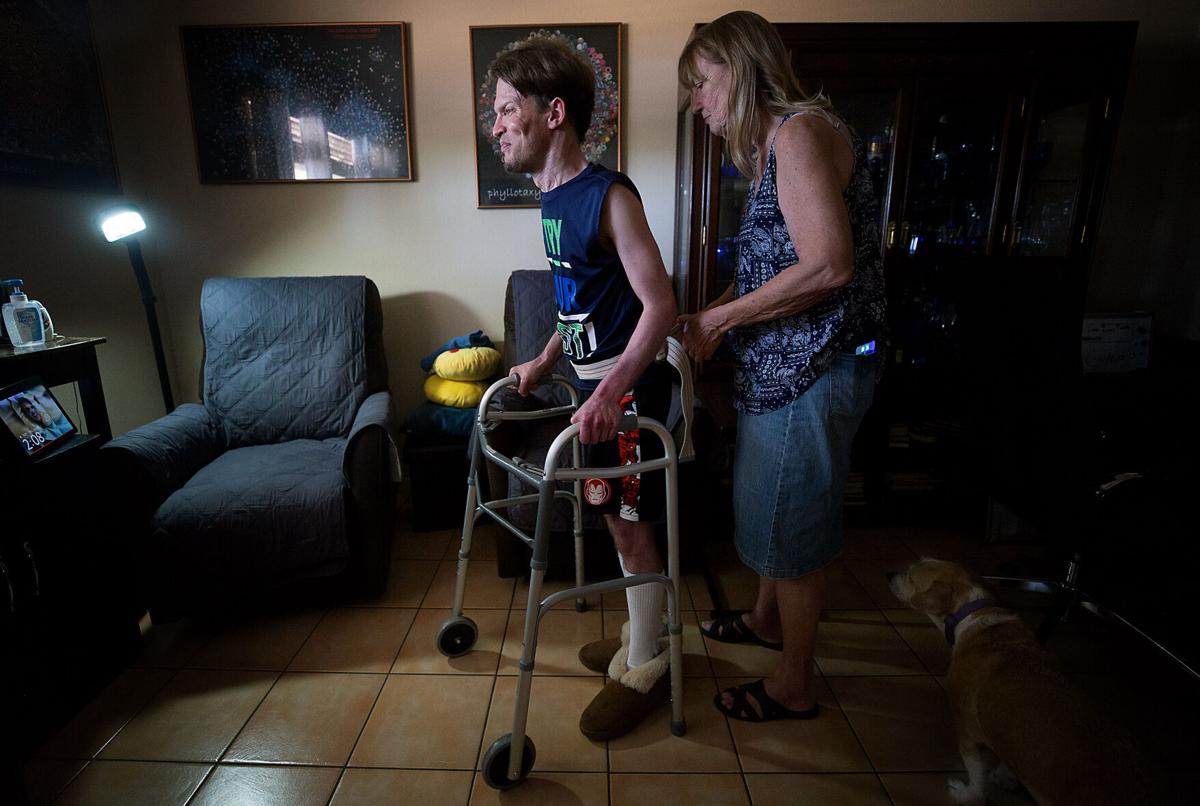 In an odd way, BJ was impressed. A person with intellectual disabilities may not always connect the dots so neatly.

“It’s so tragic and gut-wrenching and at the same time, oh my God, he put it together. It’s like, wow,” she said.

She’s grateful for these moments.

At 69, she’s not as strong as she used to be. And Drew’s condition seems to worsen by the day.

“We think that his deepest brain memory does not remember he cannot stand by himself and he cannot walk,” BJ said. “So if he wakes in the middle of the night, suddenly, screaming with the pain, Drew may try to get off the bed and stand up.”

He stands, falls and hits his head unless someone is there to guide him. He does the same thing two or three times a day at the breakfast table, BJ said.

In early September, she texted an update on Drew — and herself:

“He still has a lot of pain so his Alzheimer’s behaviors (are) worse. I had to cover overnight last night and Drew fell twice. To save him I hurt (my) back and this a.m. realized I think I broke 3 toes. Trying to work out getting to Urgent Care and also get a caregiver to cover me 6-9 p.m. for Drew.

“Reality when you care for a dependent, eh?”

For years, doctors and social workers have asked BJ why she doesn’t place Drew in a nursing home.

But it’s not that time, BJ said. “Seventy five percent of every day, Drew is fine, able to function, able to eat, able to enjoy music, able to use his computer, able to exercise.”

His memory is getting worse, but it’s still there. Even when he was in great pain during a recent hospital visit, Drew found joy in a chance encounter with a former caregiver.

“Guess who was my nurse at one time?” Drew asked.

Recently, he and his mom got cheese curds from Freddy’s drive-thru.

“Drew loves going for a ride,” BJ said. “We can’t get out of the car (because of COVID-19), but he loves leaving the house and during the time he’s in the car he’s not complaining, he’s quiet, he’s listening to music on the radio, he’s calm.”

Drew is a fan of heavy metal, he said, when talk turned to music. He loves the band Green Day, and BJ said that lately he’s been obsessed with one particular song.

Listen to the lyrics, BJ urged:

Falling from the stars

Drenched in my pain again

Becoming who we are

As my memory rests

But never forgets what I lost

Wake me up when September ends

Drew is still living, a member of his community — albeit with limited boundaries — and that is the goal of home- and community-based services.

“If you had a family member and 75% of the time their pain was managed, they had normal conversations, enjoyed their outings and enjoyed their TV shows,” BJ asked, “would you put that person in a nursing home?”

Arizonans with developmental disabilities were promised help. Instead, they face delays and denials.