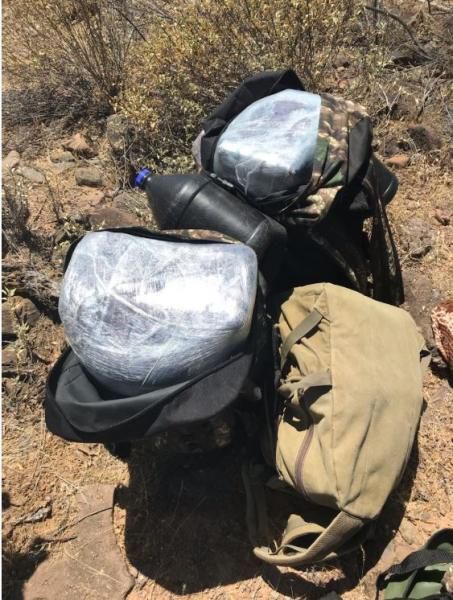 Smugglers are trying to make up for a loss of marijuana revenue as U.S. states relax pot restrictions, Border Patrol investigators believe. 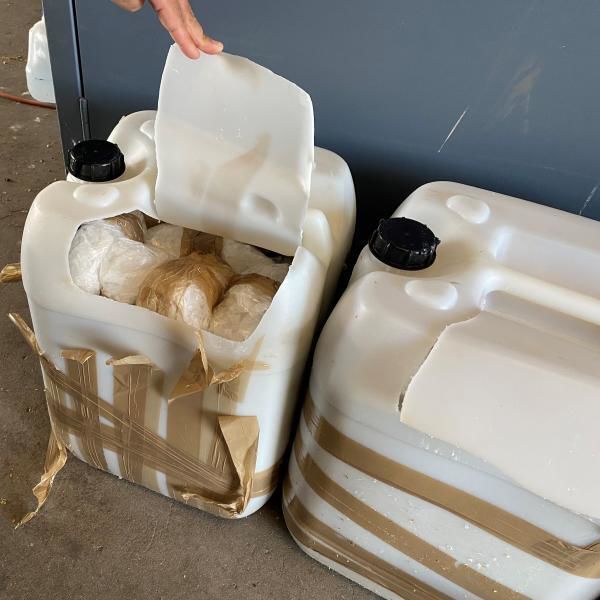 Border Patrol agents in the Tucson Sector arrested five smugglers southwest of Sells in June. Their backpacks held a total of 145 pounds of methamphetamine.

A decades-old pattern in drug smuggling is changing in Southern Arizona as backpackers start hauling meth and other hard drugs through remote desert areas.

Until recently, the pattern for smuggling drugs in Southern Arizona was clear-cut: Smugglers hauled marijuana in backpacks through the desert while smugglers at ports of entry hid meth, heroin, cocaine, fentanyl and marijuana in vehicles or under their clothes.

Now the pattern is shifting as Border Patrol agents catch more backpackers hauling meth through the desert, according to federal law enforcement officials and records at U.S. District Court in Tucson.

The shift comes amid a yearslong decline in marijuana smuggling along Arizona’s border with Mexico, as well as recent travel restrictions related to the coronavirus that cut down on the legitimate traffic that allows smugglers to sneak contraband through ports of entry. The shift also reinforces the need for a 30-foot-tall border wall, federal officials say.

“For a very long time, the drug that came through between ports of entry was almost entirely marijuana,” said Scott Brown, special agent in charge of the Phoenix office of Homeland Security Investigations, which handles drug-smuggling investigations at the border.

For roughly three decades, busts of hard drugs hauled by backpackers were “exceedingly rare,” Brown said. But in the last few months, they have seen a “marked increase” in hard drugs, particularly meth, being backpacked through the open desert areas in Arizona.

Roy Villareal, the chief patrol agent at the Border Patrol’s Tucson Sector, has drawn attention to the shift toward backpacking meth over the past few months.

“Historically drug smugglers rarely packed hard narcotics through remote areas, but recently Border Patrol agents are finding more backpacks like this one — filled with 13 kilos of meth and heroin,” Villareal said in a July 17 tweet alongside a photo of cellophane-wrapped bundles seized a night earlier in the Growler Valley west of Ajo.

In a series of tweets from late May to July, Villareal pointed to agents finding 10 pounds of meth in a backpack dropped by a man as he fled back to Mexico near Nogales; an “eagle-eyed” agent spotting two bottles of liquid meth hidden alongside a dirt road west of Ajo; and agents tracking a group in a rugged desert pass southeast of Ajo where they seized 60 pounds of meth. In late May, agents found an abandoned backpack south of Three Points that contained small bundles of heroin, marijuana and fentanyl.

The seizure was “the third significant meth seizure in three weeks to exceed 60 pounds and be found in a remote mountainous area,” according to a June 12 news release from Customs and Border Protection.

The Star found a handful of criminal complaints filed recently in meth backpacking cases at Tucson’s federal court, far fewer than the incidents mentioned in Villareal’s tweets and CBP news releases. As Villareal noted, some of the smuggling attempts end with meth abandoned in the desert, meaning no arrests were made. Other prosecutions may be delayed until federal court officials in Tucson determine proceedings can resume safely during the coronavirus pandemic.

In a June 8 bust, agents were patrolling near the village of Santa Cruz on the Tohono O’odham Nation when a Border Patrol camera picked up four people walking nearby with large camouflage backpacks, according to a criminal complaint. With the help of a Border Patrol helicopter, the agents found four backpacks with three smaller packs tied to them halfway up a mountainside. The packs contained about 145 pounds of meth.

They found five men hiding in a rocky crevasse about 50 yards from the backpacks. The men said they were from Honduras and believed they were hauling marijuana to avoid having to pay smuggling fees for crossing the border, according to the complaint. One man said they were recruited in Sonoyta, the Mexican border town directly south of Lukeville about 150 miles southwest of Tucson. They carried the packs for about three hours before they were arrested.

On May 30, agents working a few miles north of the border on the Tohono O’odham Nation arrested a Mexican man they found hiding under a tree about 200 yards from three backpacks containing about 60 pounds of meth, according to a criminal complaint. The man told agents he left the state of Veracuz knowing he would smuggle drugs across the border. Smugglers gave him two options: carry the meth in exchange for $1,000 or carry the meth in exchange for $200 and permission from the cartel to stay in the United States illegally.

One of the main reasons behind the shift in smuggling patterns is that criminal organizations need to make up the money they lost due to a drop in demand for marijuana, partly as a result of states loosening regulations, Border Patrol Agent Joseph Curran said.

“These criminal organizations are going to do what puts money in their pockets,” Curran said.

Legal medical marijuana sales have skyrocketed in Arizona, at the same time as seizures of illicit marijuana at the border have plummeted, according to records from the Arizona Department of Health Services and CBP. Dispensaries in Arizona sold nearly 166,000 pounds of legal marijuana in 2019. That same year, Border Patrol agents in the Tucson and Yuma sectors seized about 62,500 pounds, a steep decline from the roughly 760,000 pounds they seized in 2016.

Brown pointed to a combination of factors, including the drop in marijuana smuggling as the legal marijuana industry expands in the United States.

One factor is the fact that travel restrictions at ports of entry during the pandemic lessened the number of legitimate travelers, allowing customs officers to inspect a higher percentage of vehicles and pedestrians, Brown said. He noted that ports of entry still see numerous meth smuggling attempts.

Another factor is that meth is “amazingly cheap,” with the wholesale price comparable to that of marijuana, Brown said. The mechanics of smuggling through the desert also lend themselves to smuggling small packages of meth rather than bulky bales of marijuana.

The shift in smuggling patterns comes as 57 miles of new 30-foot-tall border wall have been built in the Tucson Sector since last summer.

When the projects are complete, they will span nearly 140 miles of the border from the New Mexico state line to the eastern edge of Yuma County. So far, the wall consists of a series of miles-long stretches with large gaps between them. The longest single stretch the Star has seen extends for about 10 miles.

The new wall will cut across most of the smuggling corridors used by meth backpackers, although not the roughly 60 miles of border on the Tohono O’odham Nation.

Most of the meth backpacker busts have been near Ajo, Casa Grande and the Tohono O’odham Nation, Curran said, although a few cases have occurred more to the east, including one in the Santa Rita Mountains.

In terms of the border wall, Brown said any additional infrastructure that slows down drug smugglers and illegal crossings is a benefit to law enforcement.

“The wall is going to help,” Curran said. “If it doesn’t completely stop people from coming over, what it does is it forces them to slow down.”

Those “critical seconds to minutes” give agents time to “make that apprehension on the ground,” Curran said.

As more meth smuggling attempts are made in the desert, “that only reinforces the idea that we do need that wall,” Curran said.

Smugglers of people, drugs, money, weapons and other contraband continue to find new ways to get across the border. Check out the photos of so…

2020 Primary Election voting at polls in precincts throughout Pima and Maricopa counties for several federal and local offices.

Restrictions due to coronavirus slow drug smuggling along Arizona border

The coronavirus pandemic ended the daily bustle at ports along the Arizona-Mexico border, and apparently some of the cover it provided to drug…

The U.S. Attorney's Office has been expanding the scope of prosecutions in both areas.

Across Pima County, 16,809 cases of coronavirus have now been confirmed, up 68 cases from the day before.

Gyms across Arizona could reopen in a week

It's everything we wanted," said the attorney representing gyms challenging the closure ordered by Gov. Doug Ducey to help fight the spread of the coronavirus.

The on-site inspector reviewed the sign-in sheet and once the incorrect ballots were turned in, the affected voters cannot vote again.

Future of border wall about to be handed over to voters

For residents of southern Arizona, the outcome of the election will determine the future of the border wall, setting the tone for how federal agencies will address drug smuggling and illegal border crossings for at least the next four years.

Smugglers are trying to make up for a loss of marijuana revenue as U.S. states relax pot restrictions, Border Patrol investigators believe.

Border Patrol agents in the Tucson Sector arrested five smugglers southwest of Sells in June. Their backpacks held a total of 145 pounds of methamphetamine.