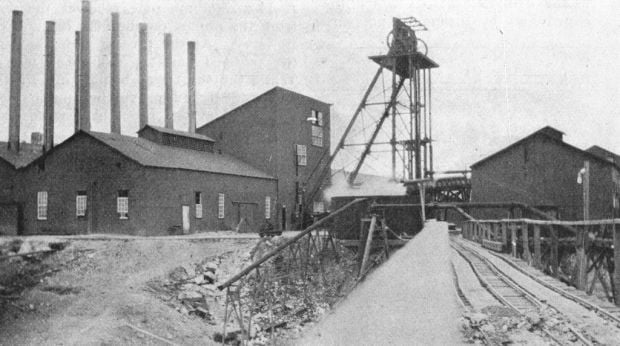 The headframe and mill of the Grand Central Mine in 1905. Area mines had produced more than $40 million in metal by 1933. 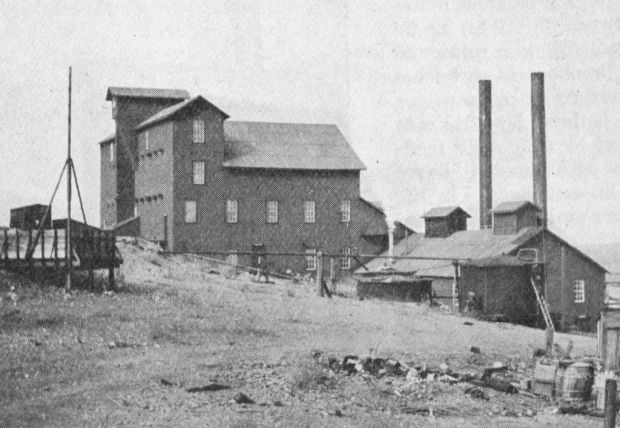 The 40-Stamp Mill was owned and operated by the Tombstone Consolidated Mines Co.

Tombstone, renowned for its gunfights, gambling halls, brothels and bars, was a silver mining town of great wealth during the decade known as “The Roarin’ ’80s” in the 19th century.

Although small mines existed in 1857 in what would later become known as the Tombstone district, it wasn’t until 20 years later that prospector Edward L. Schieffelin discovered the rich silver deposits that attracted a mass migration of miners to the area.

The future town’s name was taken from an encounter between Schieffelin and soldiers from Fort Huachuca, who warned the prospector that all he would find in the area would be his tombstone.

By 1881, due to an influx of miners and businesses, Tombstone’s population reached 10,000, making it Arizona’s largest town ﻿.

That prompted a movement to establish a separate county that was carved out of eastern Pima County and christened Cochise County after the Apache chief Cochise.

Naturally, Tombstone was the county seat — until it was moved to Bisbee by Cochise County voters in 1929.

Lack of local water needed to process the high-grade silver-lead ores led to the establishment of towns including Charleston, Contention City and Fairbank along the San Pedro River.

The proximity of water and the erection of mills at the towns ensured the success of processing the ores, which were transported nine miles by wagon train from the Tombstone mines.

The area around Tombstone included several hundred mining claims, the most productive of which were just south of the town.

Tombstone’s fortunes were connected with the rise of groundwater, which caused flooding in the mines up to the 500-foot level in the mid-1880s.

The water pumps at the Grand Central and Contention mines were destroyed by a fire in 1886, and a dispute among the mining companies over the expense of renewing operations brought about a suspension of all important mining activities. The demonetization of silver in 1893 further hindered resumption of mining for the rest of the century.

Attempts were again made to handle the water issue in 1901, when the Tombstone Consolidated Mines Co. assumed control of the property. Two years later, the El Paso Southwestern Railroad built a line to Tombstone. But in June 1909, water flooded the mines at the 1,000-foot level when steam pumps seized up and boilers ruptured.

Although pumping resumed in 1910, operations were plagued by mechanical problems. By this point, the flow of water had reached in excess of 6 million gallons daily.

Small mining operations have continued to operate around Tombstone over the past century. During World War I, manganese deposits were mined around Tombstone, enhancing the local economy. Tourist attractions such as the Good Enough Mine Underground Tour provide a look at a mine that produced silver, copper and some gold and give credence to Tombstone’s motto: “The Town Too Tough to Die.”

William Ascarza is an archivist, historian and author of five books, including “Southeastern Arizona Mining Towns” and “Zenith on the Horizon: An Encyclopedic Look at the Tucson Mountains from A to Z,” available at Antigone Books, Cat Mountain Emporium, the Arizona-Sonora Desert Museum and the Arizona Geologic Survey’s Arizona Experience Store. Email him at mining@azstarnet.com

Alexander Lofgren, 32, and Emily Henkel, 27, failed to return from a trip in the park on Sunday, April 4.

Alexander Lofgren, 32, and his girlfriend Emily Henkel, 27, failed to return from a camping trip last Sunday.

Plan brings another $50 million through Certificates of Participation to fund road repairs bringing the total so far to $85 million.

The headframe and mill of the Grand Central Mine in 1905. Area mines had produced more than $40 million in metal by 1933.

The 40-Stamp Mill was owned and operated by the Tombstone Consolidated Mines Co.