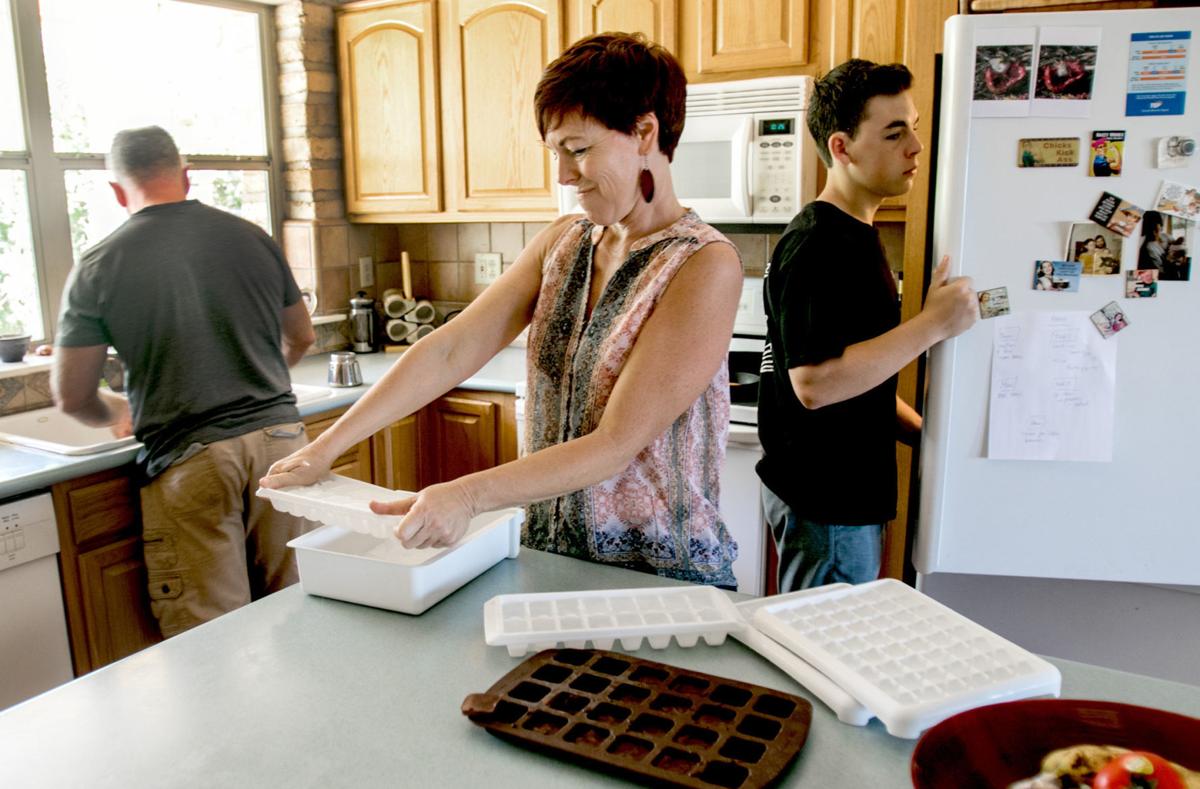 Jenni Aguilar and her family came to the Tucson area from coastal California after wildfires and mudslides convinced her to make the move. 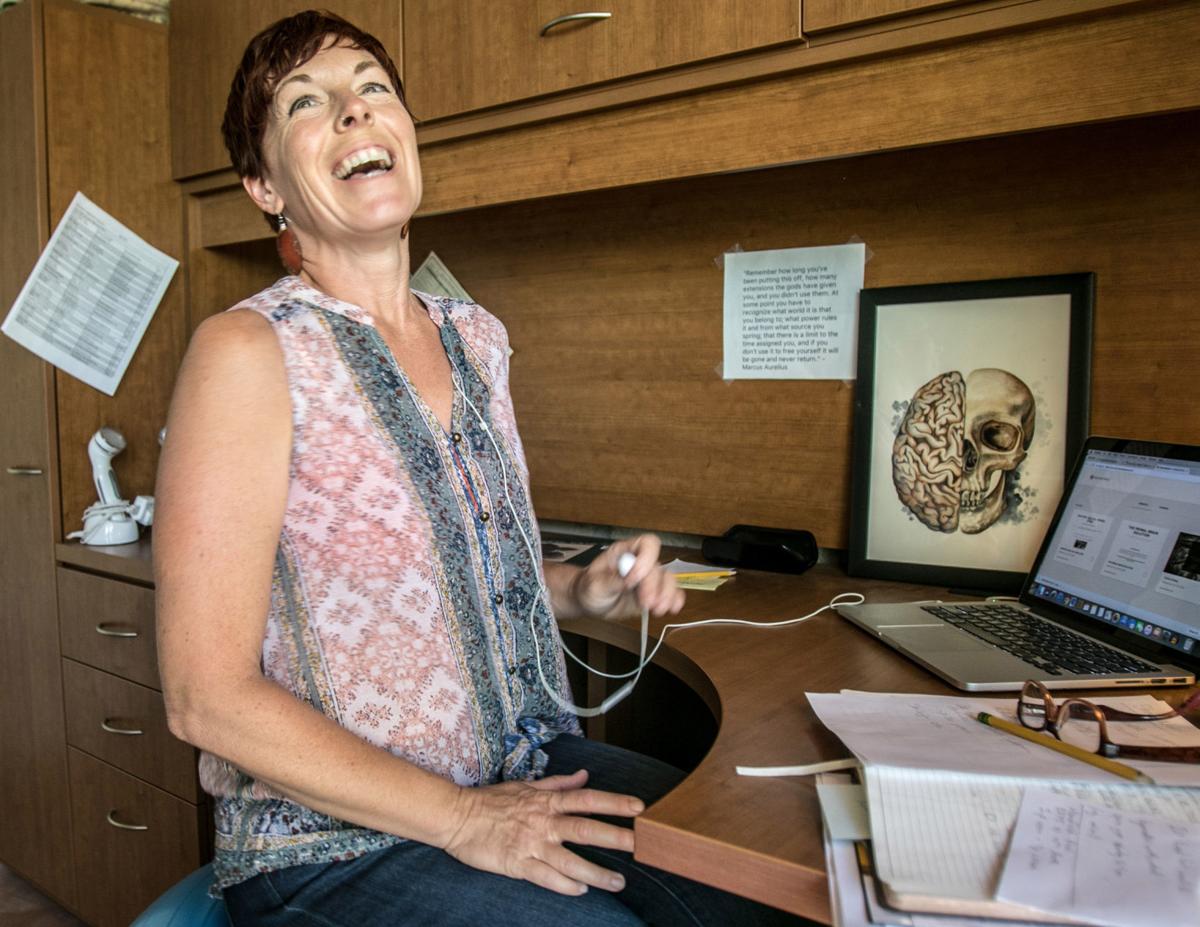 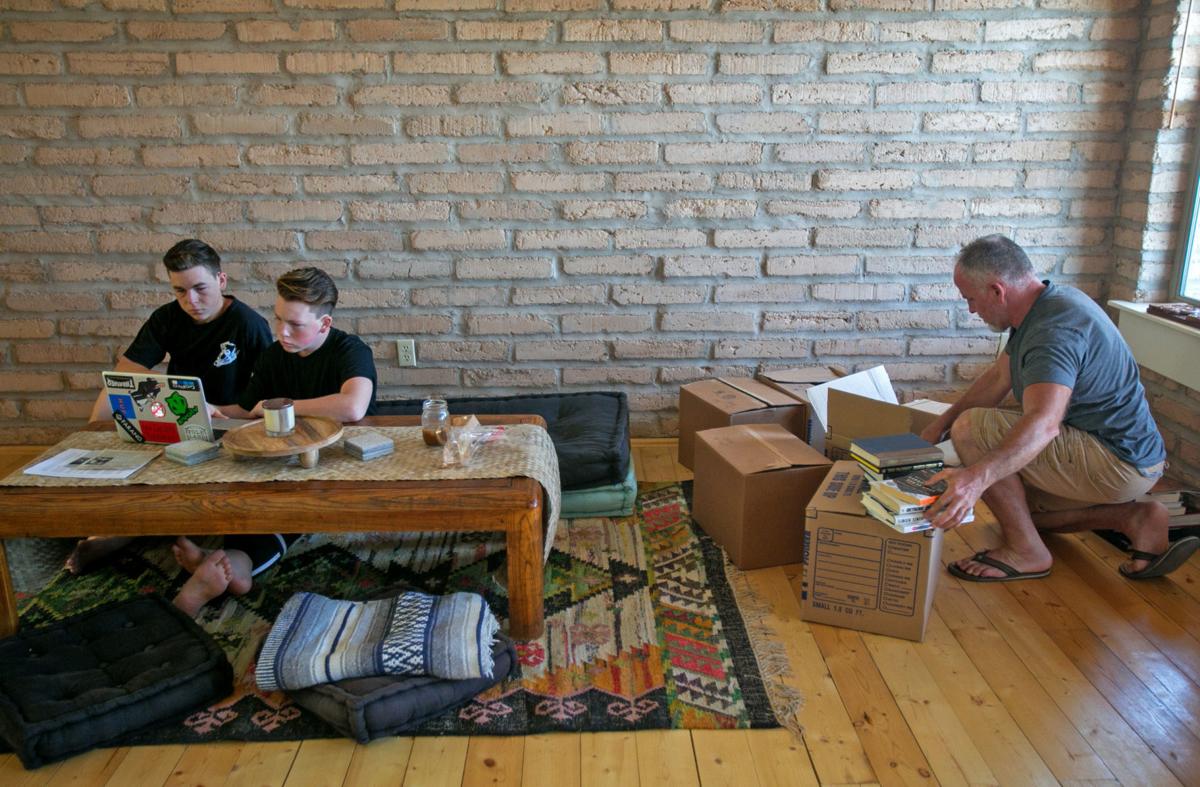 Aiden, 16, and brother Torin, 13, l-r, settle in at their computer as dad, Jon Aguilar, unpacks some boxes in the living room of the family’s new home in Milagro, a co-housing community in Tucson, AZ on June 7, 2018. They just moved to Tucson this week from California.

Arizona’s low taxes and living costs, friendly culture, arts scenes and easy access to outdoor activities make it an appealing state in which to settle.

And in decades ahead the state’s draw as a new home could be boosted as seas rise and oceans warm, forcing coastal residents to deal with fallout like strengthening storms, floods, mudslides and other disasters.

“We see natural disasters all over the world; but to be very close to one, and experience the utter helplessness, as well as the repeated evacuations, is very, very stressful,” said Jenni Aguilar, who moved her family to a four-bedroom house near Tucson from California on Memorial Day.

Aguilar says the high cost of living in California already had her considering a move from the beach town of Carpinteria when heavy winter storms followed wildfires, causing mudslides that killed 21 people and convinced her to head east.

“We started looking here, and it just worked out,” said Aguilar, who moved to Milagro, a cohousing community just outside city limits, with her husband and two sons. Her daughter, future son-in-law and grandchild are moving in this weekend.

Research published last year included Pima County among the top 9 percent of counties into which Americans are likely to move after being forced from their homes by another coastal climate threat — sea-level rise.

The study projected sea rise could bring 10,000 more residents this century to a county where about a million currently live.

Among the states, Arizona ranked sixth as a likely destination.

“People are already making those moves from coastal areas into Tucson,” said University of Georgia geographer Mathew Hauer, author of the study, published in Nature Climate Change. “There’s a lot of different reasons as to why any one person might make that move. Sea-level rise might be the straw that breaks the camel’s back, if you will. It might be that little push that people need.”

Rising temperatures are melting ice, while ocean water is expanding as it warms. Ice sheet modeling indicates Antarctica’s ice sheet could crumble at a quickening pace as warming water and air gnaw at its edges, hastening sea rise. A federal climate science assessment last year concluded seas are “very likely” to rise this century by 1 foot to more than 4 feet. A worst-case scenario would see some American shores inundated with more than 10 feet of sea-level rise during that period.

Most of the heat trapped by greenhouse gas pollution goes into the oceans. As well as influencing migration by raising the seas, that ocean heat fuels stronger storms and monsoon rain — both of which reach into Arizona. And by moving heat and heat-trapping carbon between the water and the atmosphere, ocean conditions affect inland temperatures.

Complicating efforts to predict how Arizona will be impacted by migration from rising seas, experts say its ability to accommodate growth could wither under other impacts from climate change — rising temperatures and worsening water shortfalls.

Research published last month in the Journal of the Association of Environmental and Resource Economists found that the population west of Texas, Colorado and Montana could swell more than a tenth during the next 50 years because of migration within the U.S. from climate change, largely from the South and Midwest.

Previous research by the same economists showed extreme heat, on the other hand, can drive away residents, which could affect populations and economies in cities like Tucson.

“If it’s too hot for you in Tucson, the college graduates are more likely to move out, rather than low-income or people who are less mobile,” said one of the researchers, Qin Fan, an economist at California State University, Fresno.

Perhaps more than anything else, water shortages could hobble growth in Tucson — even without climate change, which is projected to make them worse.

“The Southwest, ever since the Second World War, has experienced this absolutely explosive urban growth, and that growth has been based on cheap water and cheap electricity,” said Thomas Sheridan, an anthropology professor at the University of Arizona. “There’s no major new source of water on the horizon.”

Closer to America’s shores, some streets flood now even in fine weather, with high tides overtopping coastlines that were developed when local water levels were more than a foot lower.

Rising flood-insurance rates are adding to coastal housing costs. Homes along some of the most flood-prone roads have lost much of their value, while damaged houses left vacant following storms blight neighborhoods along the Gulf Coast and up through the mid-Atlantic.

“We’re going to get to a threshold,” said David Wrathall, a geographer at Oregon State University investigating future migration from sea-level rise. “There will be low levels of migration, and then suddenly there’s going to be these moments where lots of people are going to come into the system all at the same time. Not just from one location, but from lots of coastal locations simultaneously.”

A major uncertainty in all climate research is future pollution rates. The more pollution that’s released from fossil fuels, farming and deforestation, the more severe the impacts from climate change will be.

Governments from Tucson to China are starting to take steps to slow warming and adapt to it, even as the Trump administration dismantles federal climate programs.

Hauer’s research considered how many people in coastal U.S. counties could be forced to find new homes if high levels of pollution this century cause seas to rise 6 feet.

Hauer’s research showed 13.1 million Americans would be at risk of losing their homes by 2100 — when today’s toddlers could be old and vulnerable. The figure included more than 2.5 million people leaving Florida and nearly 1.5 million arriving in Texas.

Other popular destinations may include counties in Georgia, North Carolina and Pennsylvania, as well as Arizona.

The research didn’t account for effects of migration from low-lying and vulnerable places outside the 50 states, like Puerto Rico, the Marshall Islands, Bangladesh and the Yucatan Peninsula, where rising seas and strengthening storms will drive countless more to seek new homes.

Instead, it examined one of the ways that warming could affect the movement of families around the U.S. — which for many is already a familiar process.

“We’ve lived in a lot of places — we’re somewhat semi-nomadic,” said Aguilar, who moved to Tucson after the mudslides.

This is the first of two stories being produced and published in partnership with the Arizona Daily Star for World Oceans Week. Climate Central is a non-advocacy group that researches and reports on the changing climate.

Scientists say the Southern Ocean surrounding Antarctica plays an integral role in climate change — which will have effects we can definitely expect to feel in Southern Arizona.

Arizona's new pool should be among the best in the country, Augie Busch says.

Emails: Gary Pierce did political work for Arizona utility he was supposed to regulate

Police are looking for a 37-year-old man who left the scene before officers arrived.

After being hit by ambulance, Arizona Wildcats swimmer ready to dive back in

“That first night was so hard — it was the most pain I’ve ever been in."

As a result of climate change, monsoon storms in Central and Southwestern Arizona are becoming less frequent, but more intense.

UA ecologist said that can be important to land-use decision makers.

What researcher learn can stave off rising global temperatures and climate change.

Lightning-caused wildfire has burned about 8,000 acres near Bisbee

A fire reportedly started by a lightning strike is burning north of Bisbee, officials said.

The man will be sentenced more than one year after the fatal shooting.

The man is in custody after being in a standoff with police.

Jenni Aguilar and her family came to the Tucson area from coastal California after wildfires and mudslides convinced her to make the move.

Aiden, 16, and brother Torin, 13, l-r, settle in at their computer as dad, Jon Aguilar, unpacks some boxes in the living room of the family’s new home in Milagro, a co-housing community in Tucson, AZ on June 7, 2018. They just moved to Tucson this week from California.