The $24 million Houghton Road-Interstate 10 interchange project is on track for completion later this year, the Arizona Department of Transportation says, and it includes a first-of-its-kind feature for Tucson.

Crews marked their latest milestone with motorists now using a portion of the new six-lane bridge over I-10 as part of the region’s first “diverging diamond” interchange, which can handle a heavier traffic load while being safer for drivers, ADOT says.

The new pattern moves traffic over the bridge on what are traditionally the opposite lanes and then has vehicles cross over to the right-side lanes of traffic to continue on from the bridge.

Motorists up until now were using the soon-to-be demolished two-lane Houghton bridge. The scheduled destruction of that structure will cause overnight restrictions on I-10 on July 23-24.

“We found that traffic moves very smoothly through the one we have right now in Phoenix, that’s the first one in Arizona. This will be the second full diverging diamond interchange in the state and the first one in Southern Arizona,” said Garin Groff, an ADOT spokesman.

The project, ADOT says, is approximately 75% complete. Crews began the project in August 2020 and plan to open the site later this year, featuring six lanes of traffic as well as improvements for pedestrians and bicyclists.

Houghton’s current configuration using one lane of travel in each direction will be in place for the next several weeks as crews work in the area, including completing ramp work on the east side of the interchange.

“One of the safety benefits is when drivers are crossing on Houghton and want to make a left turn onto the on-ramp they won’t have to contend with any cross traffic, it’s a much smoother and safer configuration,” Groff said.

Drivers on eastbound I-10 exiting at Houghton will either turn right onto southbound Houghton, similar to a traditional interchange, ADOT said, “or drivers will turn left at a signal onto the left side of Houghton Road to cross I-10. They will approach a signal at the north crossover point, and when the signal is green, they will switch to the right side of the road and continue north.”

ADOT said the diverging diamond design not only promotes safety but can handle higher traffic volumes in a growing southeast Tucson area.

“That area is growing so quickly, this really is going to be something that will be able to serve that part of Tucson for decades to come,” Groff said.

The Federal Highway Administration says the configuration reduces lost time at the interchange and increases capacity, reduces conflicts between vehicles and pedestrians for most crossing movements and provides opportunity to safely accommodate bicyclists through interchange, according to an agency report.

However, the agency did acknowledge that the interchange “may have potential for wrong-way maneuvers at crossovers.”

On Tucson’s northwest side, motorists are now using the new bridge at Ruthrauff Road/El Camino del Cerro carrying vehicles over I-10 and the Union Pacific Railroad tracks.

The major step was completed on Thursday night, eliminating motorists’ need to stop for trains in the area.

“There’s something of the order of 40 trains a day that pass through. That means a lot of people are stuck waiting to get across, either to access the freeway or to get off the freeway onto Ruthrauff or El Camino del Cerro,” Groff said. “I was out there for maybe 45 minutes this morning. I must have seen three or four trains passing through. The nice thing is that they were all going underneath Ruthrauff, nobody was having to wait for them.”

The I-10 ramps connecting drivers to the interchange remain closed and should open in the next several months, ADOT said. Crews still need to reconstruct the ramps and frontage roads to carry all traffic over the railroad tracks.

By late fall, ADOT said, motorists will use the expanded I-10 with four lanes in each direction, a widened Ruthrauff Road.

“ADOT’s made a major commitment over the last few years to not only add lanes to interstate 10, but also to modernize and widen several interchanges, so traffic can flow more smoothly and more safely by not having to contend with the railroad crossings,” Groff said.

The paving starts on the northern section of the project, between Magee Road and Calle Concordia, with crews working on about 1½ miles per night.

Most work will take place overnight from 7 p.m. and 6 a.m. Sundays through Thursdays. One lane will always remain open during the paving work.

During the day, all lanes on Oracle will remain open throughout most of the work.

The Move Tucson project list was developed over the last 18 months with the help of residents’ suggestions. There are 234 total projects that would cost $5.7 billion.

Some motorists have taken out their frustrations on workers staffing the roadblocks prompted by multiple wildfires burning across Arizona.

Two busy corridors are part of a pilot program that allows the timing of traffic signals to adapt to current roadway conditions.

All traffic is currently being routed onto the southbound lanes of the new Houghton Road bridge over I-10. 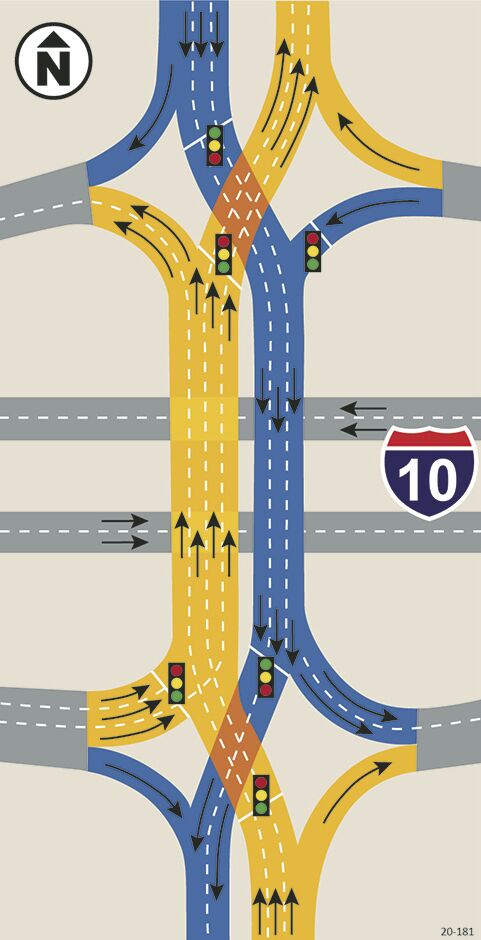 The new Houghton Road bridge over Interstate 10 will be the first in Tucson to use a traffic flow called “diverging diamond,” which allows for heavier traffic to safely move through the interchange, according to the Arizona Department of Transportation.