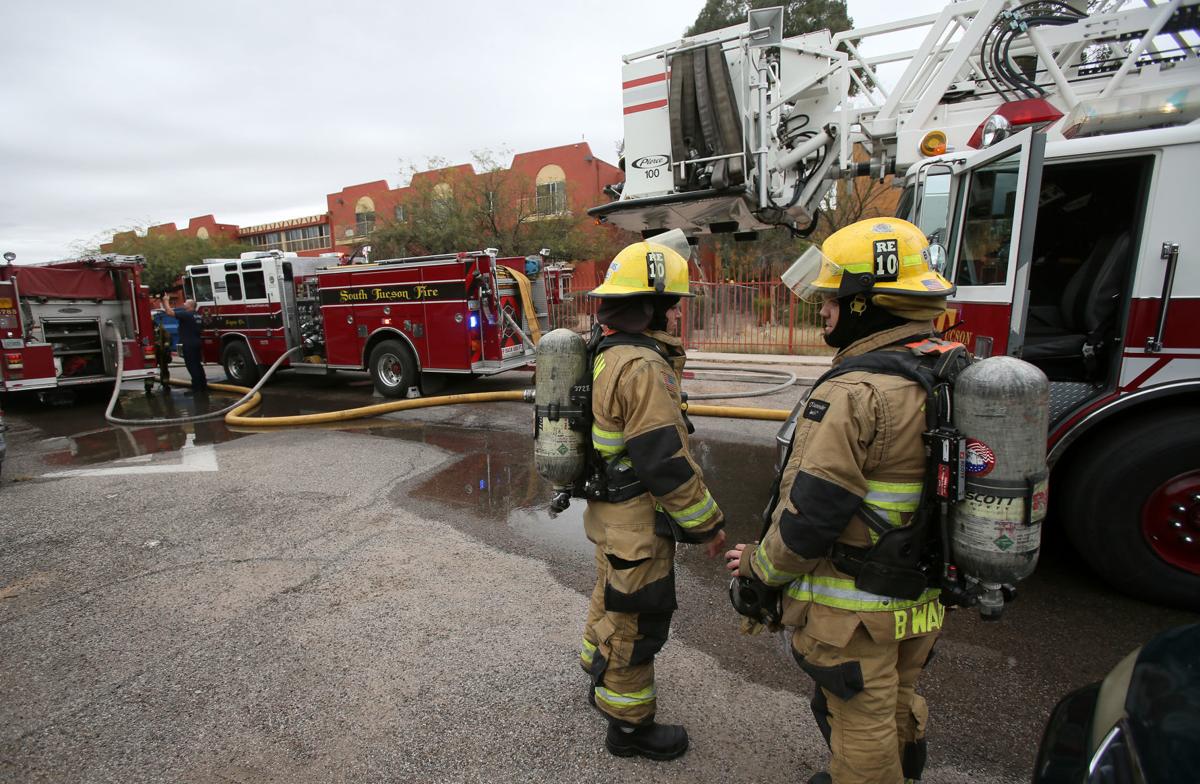 A city of Tucson fire crew, foreground, assisted the South Tucson Fire Department earlier this year. The city of South Tucson can afford only two- and three-person fire crews. The national standard is four.

South Tucson has three firefighters, and sometimes only two people, on crews. 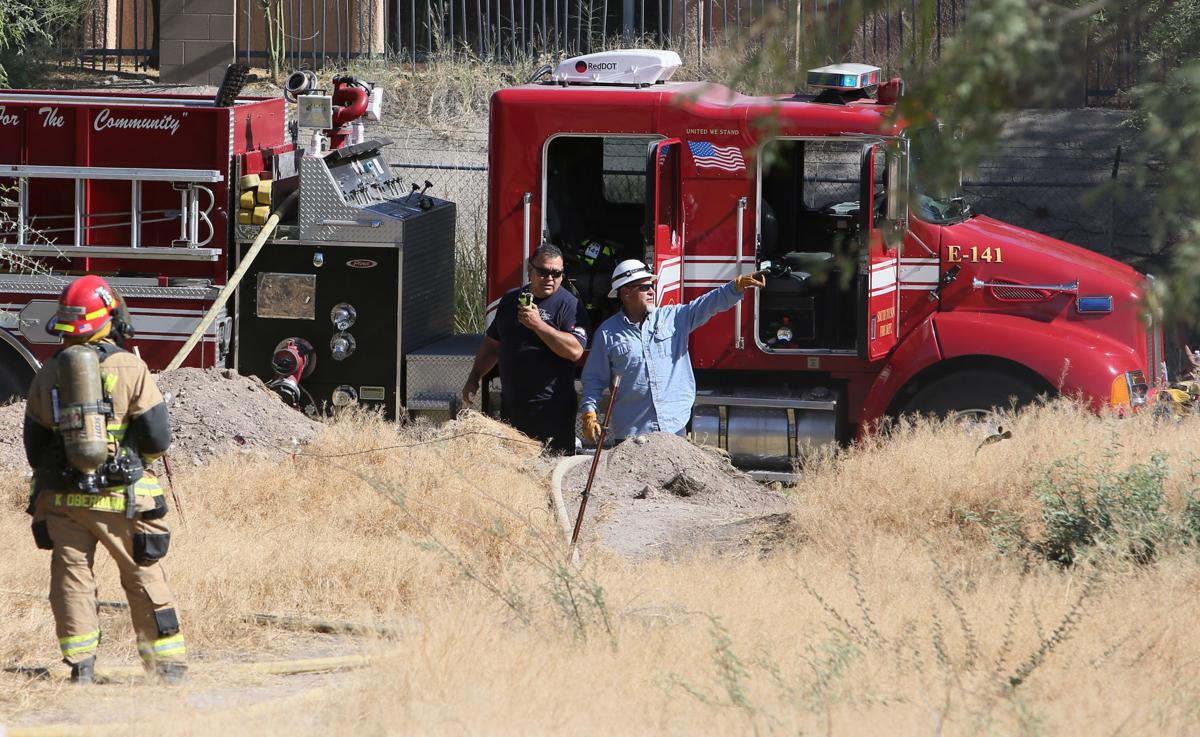 South Tucson Fire Engine 141 at the scene with City of Tucson fire units at a fire that burned brush, trees and small structures near 11th Ave. and 27th St. in South Tucson on June 24, 2019.

The new half-cent sales tax dropped like a bombshell during a heated South Tucson City Council meeting, in which residents shouted at the city staff and elected officials.

John Vidaurri, the recently hired city manager — the fourth person in the last five years to hold the post — was the target of ire among many at the meeting, mostly for his $80,000-a-year salary, when he made the pronouncement: the 1-square-mile city on Tucson’s south side is running on borrowed time.

“A half-cent sales tax increase will keep this thing going for three years,” Vidaurri said. “Within three years we’re going to be bankrupt and we are going to be de-incorporated. We have cut services. You have to consider a secondary property tax to keep the city going. That’s the bottom line.”

In reality, the financial outlook for South Tucson could be worse than Vidaurri said at the meeting. A single financial emergency could easily push the city’s already-shaky finances into the red, burning through the city’s razor-thin rainy-day fund.

The half-cent sales tax increase is estimated to generate about $123,200 annually.

One looming threat to the city’s budget could come from its Fire Department, where budget cuts forced the city to reduce the size of crews on its trucks from the national standard of four members to three members.

That means city firefighters no longer rush into burning buildings to save lives.

Instead, they wait for crews from the city of Tucson to arrive. The cash-strapped city of roughly 5,700 people can no longer afford to meet federal standards that require a minimum of four fighters at the scene when entering a burning building. Under the standard, two firefighters need to be outside of the structure in case there’s a need to rescue those inside.

“My concern is if one of your people gets hurt, you’re opening us up to another lawsuit,” Romero said. “I don’t want the Fire Department to be sued, the city to be sued over some … judgment that thinks that we don’t need the fourth person.”

South Tucson Fire Capt. Andy Luna — one of a handful of full-time firefighters still on the city’s payroll — told the council that waiting for the city of Tucson firefighters to respond before rushing into a burning building is wrong.

“So if we’re waiting for the city like we do, and there’s somebody in there, and nana and tata sitting there, and their family members are standing here with South Tucson Fire with three guys and they’re saying, ‘What are you doing? Get in there, get in there,’ and we’re saying, ‘We cannot go in there,’” Luna recently told the council.

Last year, it took South Tucson firefighters 23 minutes before asking the city of Tucson for help in fighting a fire at Micha’s Mexican Restaurant. Despite the response from TFD, the popular restaurant was devastated by the fire and closed for several months.

The nightmare scenario, say firefighters in both departments, is if Tucson firefighters are already responding to a significant fire elsewhere, they might be unable to rush to help South Tucson.

Joe Gulotta, the interim fire chief for the city of Tucson, said calls for service into South Tucson have gone up in the last year.

The city is not tracking the cost for those calls, saying there is a community benefit to respond to structure fires regardless of which side of the city limits they are on.

The city of Tucson is covering the costs of the calls that TFD responds to, but the cost of those calls was not immediately available last week.

The half-cent tax increase being considered by the South Tucson council could pay for the additional staffing in the fire department, paying for a handful of new part-time firefighters to cover shifts.

A majority of the South Tucson Fire Department’s staffing comes from firefighters who have full-time jobs in other fire departments who take on work extra shifts there for extra income.

“We’re not McDonald’s, I don’t want to offend them — McDonald’s. We don’t sell $2 hamburgers. We sell $5,000 to $30,000 vehicles,” Clifton told the council, adding that the additional tax could push more buyers to car lots in Tucson. “You are going to run us out of business.”

Maritza Broce, who owns a small shop in South Tucson, pleaded with the council to find another option than raising taxes.

“This is the wrong time to be doing the sales tax,” Broce said. “This sales tax proposal is only willing to bring you $120,000 in revenue. That’s not enough. You need to look for real solutions.”

Some residents are eyeing the city’s reserve fund as an alternative to the half-cent sales tax.

They argue that the cost to hire several part-time firefighters — estimated to be $114,000 a year — is doable without raising taxes.

Vidaurri disagrees. He projected that the reserves will be depleted within three years as other city expenses eat into it. In the next year alone, the city is expected to spend nearly $100,000 of the fund balance for normal city operations.

“The implementation of a half- cent sales tax will help prevent the depletion of fund balance reserves while further planning/financial stabilization is underway,” Vidaurri wrote in a recent memo to Council.

He warned against new spending, saying the city needs to show it can spend taxpayer dollars responsibly.

“Adding additional expenditures will not help prove the city is stable and sustainable. The city will not be able to seek bond refinancing opportunities to further assist through planning,” he wrote.

As of mid-2017, the city of South Tucson owed about $7.2 million in bond debt related to a bond it took out in 1984 to help the town emerge from bankruptcy. Over the course of three decades, city officials repeatedly refinanced the debt to borrow more and more money.

The city also has other plans to increase revenue, but those could take years to bring in the necessary revenue. For example, the city is expected to massively increase the boundaries of where developers can apply for tax incentives related to development.

A month ago, the council reviewed a proposal to expand the property tax abatement area the entire length of the two popular commercial corridors inside the city limits.

The city manager also says they are considering asking voters to increase the secondary property tax in the near future.

She rattled off a partial list on Monday night — a recession, a drop in the sales tax, a natural disaster or an unfunded mandate from the state. She also discussed lawsuits, which has often been an issue for South Tucson.

Several recent legal settlements could have easily bankrupted the city, which instead has agreed to multiyear contracts to make annual installments.

For example, Pima County signed off on a $1.1 million loan to South Tucson to settle a lawsuit over property taxes collected by the city in 2011, 2012 and 2013 that were not approved by voters. South Tucson will repay the loan — with interest — over a 20-year period.

In 2016, the city settled a lawsuit with Waste Management over unpaid residential garbage collection fees for $300,000, and agreed to pay the Pasadera Behavioral Health Network $2.8 million to end a fight over a decision to deny the organization permits for a treatment center.

The council is expected to vote later this month on the half-cent sales tax increase.

Voters can change their party affiliation through Feb. 18 to be eligible to vote.

Being smarter in 2020: How to report potholes, other nuisances

Are you tired of that pothole you just can’t avoid? Are you wondering why it hasn’t been filled?

A city of Tucson fire crew, foreground, assisted the South Tucson Fire Department earlier this year. The city of South Tucson can afford only two- and three-person fire crews. The national standard is four.

South Tucson has three firefighters, and sometimes only two people, on crews.

South Tucson Fire Engine 141 at the scene with City of Tucson fire units at a fire that burned brush, trees and small structures near 11th Ave. and 27th St. in South Tucson on June 24, 2019.