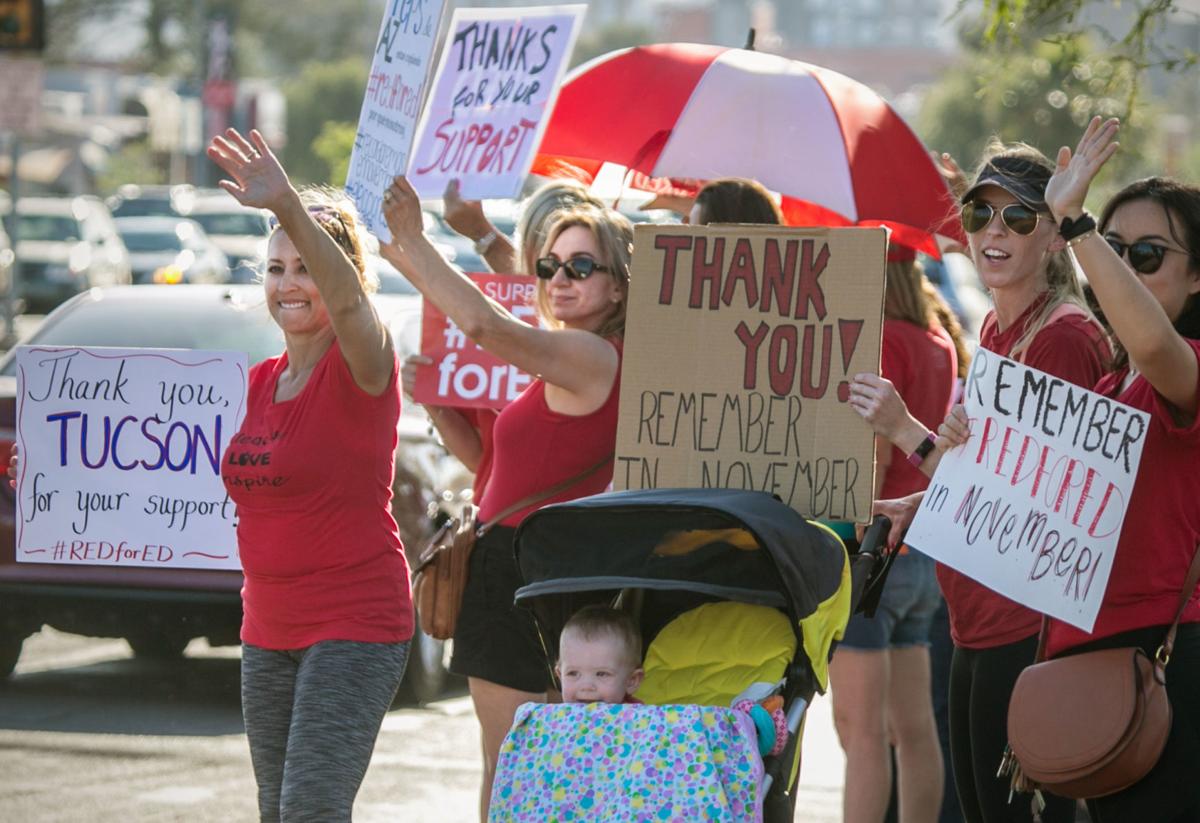 Dozens of #RedForEd supporters turned out on the northeast corner of North Campbell Avenue and East Speedway on Thursday to thank those who backed their cause and to remind them about the November elections. 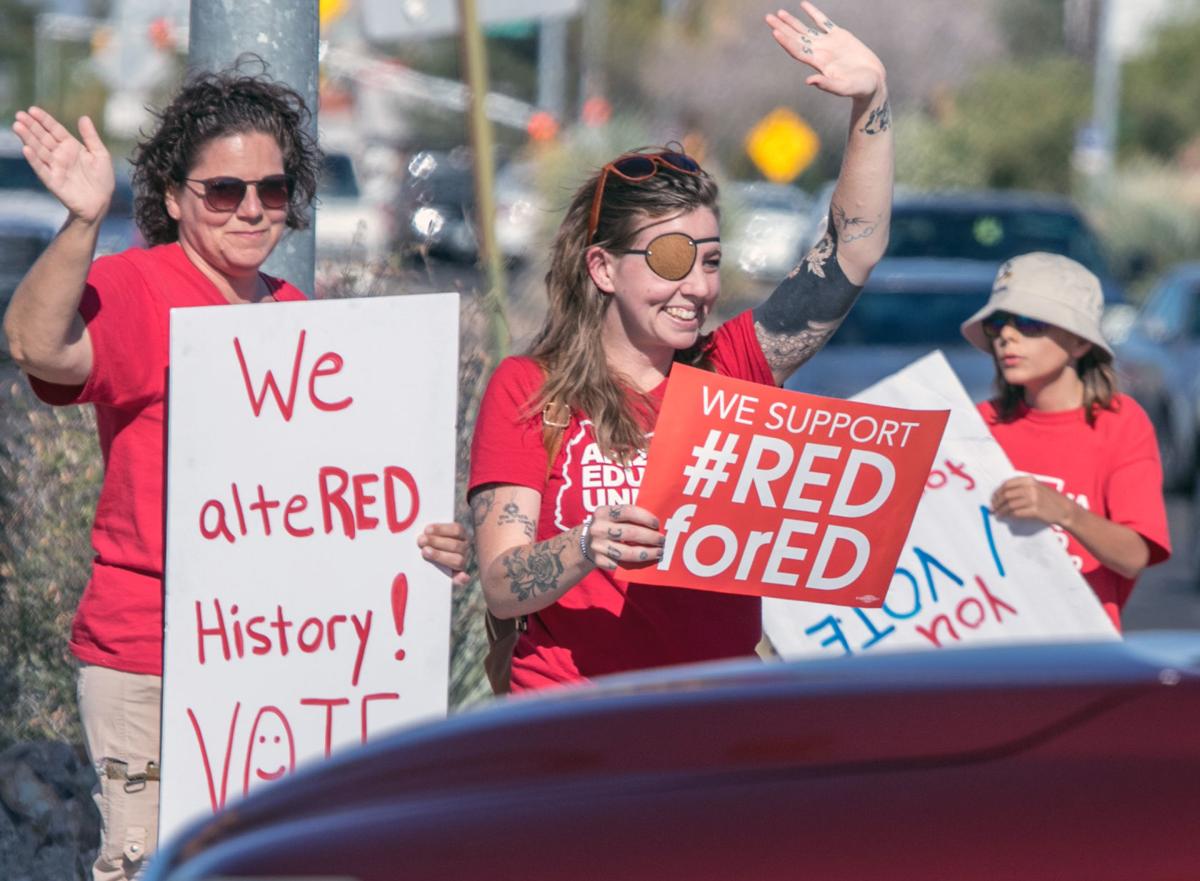 Zaelyn Bear, left, and Marjorie Owen from Amphi’s Rillito Center turned out with their kids on the corner of Main & Speedway on May 3, 2018 in Tucson, AZ. for the Paint Speedway Red event thanking Tucson for their support as teachers prepare to return to work on Friday. 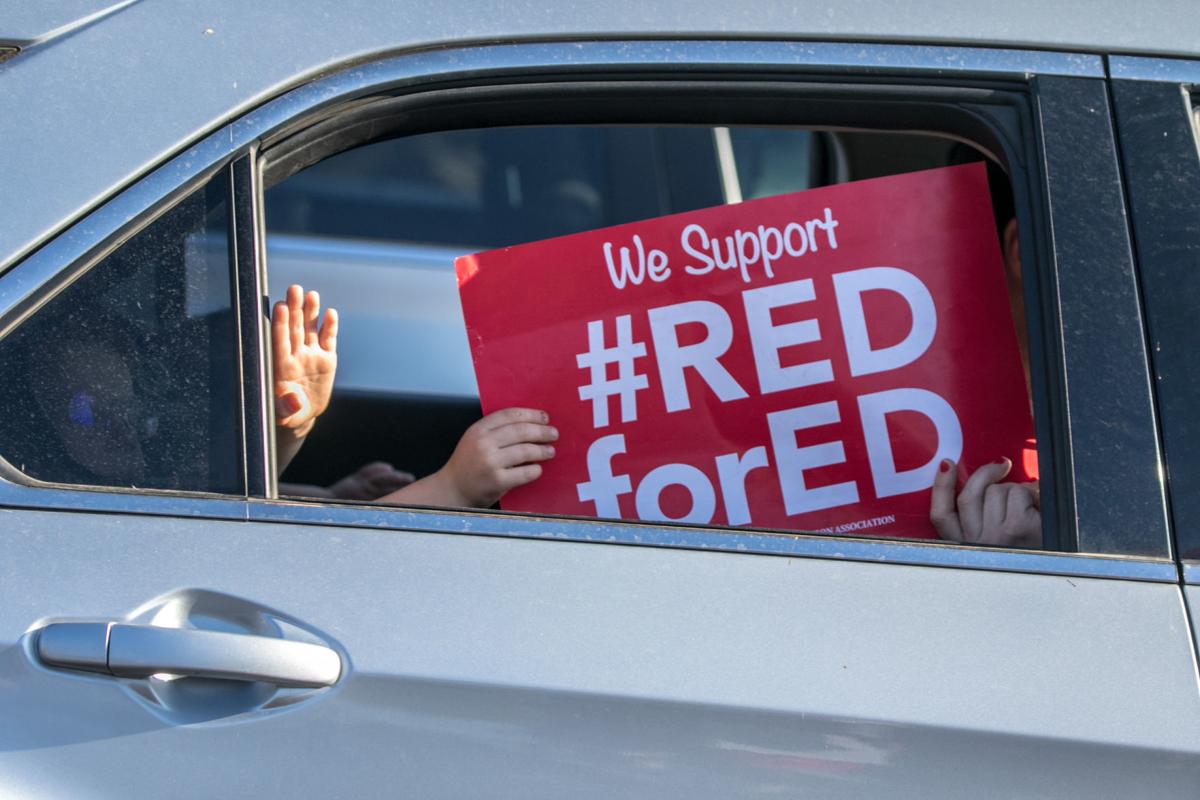 A child waves as an adult’s hand helps hold their sign in support of teachers as they drive by the Paint Speedway Red event at Campbell & Speedway on May 3, 2018 in Tucson, AZ.

“Arizona teachers have earned a raise, and this plan delivers,” the Republican governor said in a prepared statement. He said the plan also provides $100 million in other education assistance, “flexible dollars” that can be used by schools for a variety of needs, including raises for support staff workers such as counselors, custodians and others who are not included in the teacher pay package.

But the Republicans who control both the House and Senate spurned proposals to enact several other demands of striking teachers, including giving raises to support staff, shrinking class sizes and adding money for more school counselors.

Even the presence of several hundred teachers in the legislative galleries — and more outside, some having a candlelight vigil while singing “America the Beautiful” and “Amazing Grace” — appeared to have no effect on getting additional dollars for public schools out of lawmakers.

“The people down here, a lot of them, don’t listen to our voices,” said Noah Karvelis, an organizer of Arizona Educators United, the group that created the #RedForEd movement that, along with the Arizona Education Association, organized the strike that began April 26.

“They don’t respond,” Karvelis said. “If they did, we’d have $1.1 billion for education in this budget.”

But with the budget now approved and nothing more to be gained, teachers were expected to start returning to classrooms Friday, ending Arizona’s first statewide teacher walkout, which affected the majority of the state’s 1.1 million public school students.

The lesson for educators, Karvelis said, is to remain politically organized.

“We have an incredible infrastructure and movement built,” he said. “Now we’ve got to sustain it and bring answers. And one of the ways we do that is through the ballot now.”

The weeklong strike produced no concessions. But the Arizona #RedForEd movement, formed in the wake of the strike of West Virginia teachers that got them a 5 percent pay hike, does have some things to show for itself.

The legislative session started in January with Ducey offering teachers just a 1 percent salary increase, insisting that’s all the state could afford. But massive demonstrations and some Republican lawmakers crafting their own plans led to Ducey jumping out front last month, saying he found sufficient funds, largely from future economic growth, to finance the pay raise.

Rep. Anthony Kern, R-Glendale, pointed out to teachers in the gallery that Republicans were the only ones voting for the bill with the 19 percent pay increase, with Democrats opposed.

“So I want the Arizona voters to know and to remember who defended the teachers in November,” Kern said.

That drew derision from Rep. Reginald Bolding, D-Laveen, who said the package does not restore the more than $1 billion the Republican-controlled Legislature cut from K-12 education in the past decade.

But House Speaker J.D. Mesnard, R-Chandler, chided Democrats for complaining now that a 19 percent increase is too little even as they pushed last year, albeit unsuccessfully, for a 4 percent teachers’ raise.

Even with the complaints that the state should have done more, four Senate Democrats joined with the 16 Republicans present to support the pay plan, including three Tucson-area Democrats: David Bradley, Andrea Dalessandro and Steve Farley. All 25 House Democrats were solid in their opposition.

Salary aside, there were things Democrats sought to add to the spending plan and Republicans voted to reject.

Rep. Charlene Fernandez, D-Yuma, sought to expand the definition of “teachers” — those eligible for the pay hike — to include counselors, social workers, psychologists, speech pathologists and librarians, all people excluded from getting a share of the earmarked raises.

Republicans were opposed to that, as well as to requiring one counselor for every 250 students.

There also was no GOP support for a proposal by Rep. Kelli Butler, D-Paradise Valley, to limit class size to no more than 25 students.

“Research shows that students in smaller classes perform better in all subjects and on all assessments,” Butler said. She also said smaller classes allow teachers to spend more one-on-one time with students. “They get to spot academic problems, see if someone is being bullied or depressed.”

But Rep. T.J. Shope, R-Coolidge, who sits on a school board, said these decisions should be left to local school boards.

On the revenue side of the equation, Republicans spurned several proposals to raise more money to ensure there will not only be dollars for future promised teacher pay raises, but also to finance some other priorities and restore per-student funding to at least 2008 levels. Those included phasing out some tax exemptions and eliminating the ability of individuals and corporations to divert some of what they owe in state income taxes to help children attend private and parochial schools.

But it wasn’t just Democrats who found themselves frozen out from making adjustments to the deal hammered out between the GOP leaders and Ducey.

Rep. Kelly Townsend, R-Mesa, who has been a vocal opponent of the teacher walkout, sought to make it illegal for teachers to “use classroom time to espouse political ideology or beliefs,” language that could be read to preclude teachers from wearing their #RedForEd T-shirts in class. But Majority Leader John Allen, R-Scottsdale, said her proposal was not part of the official budget deal.

Allen also quashed another Townsend proposal that would have imposed $5,000 fines on districts that close schools on days they were supposed to be open. Permissible exceptions would have included invasions, riots, epidemics, plagues of insects and acts of God — but not strikes.

Townsend said many students and parents were not only inconvenienced by the strike and the closure of schools but may have suffered financial losses because of having to change travel plans for graduation or vacations. And she lashed out at teachers who were in the gallery — teachers presumably on strike — who were watching the budget debate.

“You should not be able to do that to the people of this state because you want funding,” she said.

Townsend seemed to indicate some empathy with the concerns of teachers. “But you do not get to hurt the people of this state because I represent them as well,” she said. “And I will do everything I can to ensure that their losses are recouped.”

All but TUSD reopen Friday

Tucson Unified School District is the only major school district in Pima County not returning to classes Friday, May 4. Because TUSD is so large, “it takes a little more time for us to mobilize and ensure that each of our 86 schools sites will have transportation and sufficient staffing,” parents were told by email. TUSD will resume classes Monday.

• Increases tax dollars for "economic freedom schools" at the University of Arizona and Arizona State University to study and promote free enterprise and entrepreneurship and adds $500,000 for a third such school, at Northern Arizona University.

• Provides $6 million in state money to get $18 million in federal cash to construct a new National Guard "readiness center'' in the Tucson area.

• Sets aside $4 million to expand and make more accessible Oracle State Park in the Catalina Mountains.

• Adds another $8 million to money already allocated for new veterans homes to be built in Yuma and Flagstaff, to expand capacity.

• Eliminates the ability of those who buy special license plates to get a second plate for the front of the vehicle.

• Increases the assessment on hospitals to help pay for care for the working poor, to free up tax dollars for other state expenses.

• Continues the practice of denying state aid to community colleges in Pima and Maricopa counties.

• Provides $11.26 million divided up among all counties for maintenance of essential services.

* None for Maricopa or Pima colleges

Photos: Massive #RedforEd march in Phoenix and Tucson in 2018

Arizona investors could soon be in line for a tax cut, with a big chunk of it going to 183 multi-millionaires.

They want him to spend all the new money for education on salaries.

Strict compliance for citizen-initiated ballot initiatives to remain for now

The law could keep some from taking initiatives directly to voters.

Gov. Ducey not interested in disciplining Arizona teachers for striking

He differs from his fellow Republican, the state schools chief, on that issue.

Arizona not keeping up when it comes to helping vulnerable kids, report says

Dozens of #RedForEd supporters turned out on the northeast corner of North Campbell Avenue and East Speedway on Thursday to thank those who backed their cause and to remind them about the November elections.

Zaelyn Bear, left, and Marjorie Owen from Amphi’s Rillito Center turned out with their kids on the corner of Main & Speedway on May 3, 2018 in Tucson, AZ. for the Paint Speedway Red event thanking Tucson for their support as teachers prepare to return to work on Friday.

A child waves as an adult’s hand helps hold their sign in support of teachers as they drive by the Paint Speedway Red event at Campbell & Speedway on May 3, 2018 in Tucson, AZ.