Tucson Electric Power is close to releasing a plan that further boosts its commitment to reducing reliance on coal and natural gas in favor of renewable energy sources like solar. 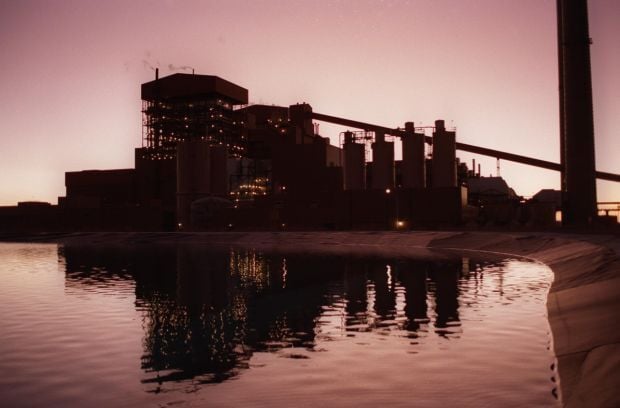 Tucson Electric Power’s coal-fired Springerville power plant has been in operation since the 1980s. A Sierra Club proposal calls for TEP to shut one unit of the plant by 2025. 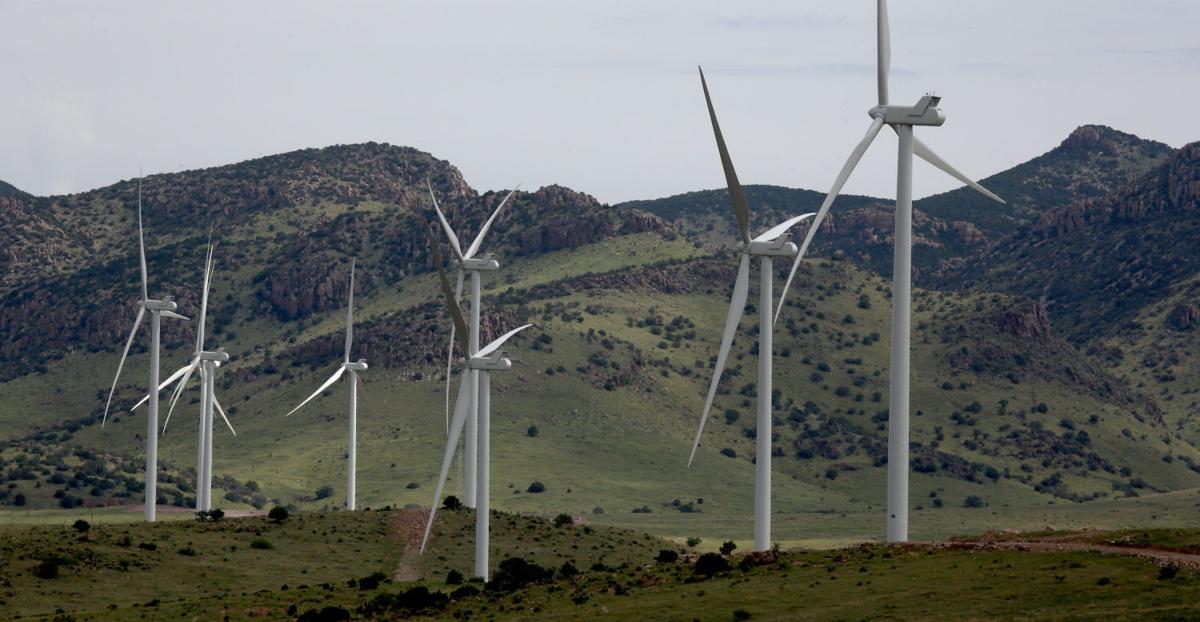 These turbines are part of the Red Horse 2 wind and solar project near Willcox, which supplies energy to Tucson Electric Power.

But the utility has committed to bringing online enough new solar and wind energy by 2021 to bring its share of renewable energy well above the national average.

Now, TEP is close to releasing a plan to further boost its commitment to reduce its reliance on coal and natural gas in favor of renewable energy sources and cut heat-trapping greenhouse gas emissions.

The utility is required by the Arizona Corporation Commission to submit an Integrated Resource Plan by June 26, saying how it will keep customers’ lights, appliances and machinery running for the next 15 years. TEP produces such plans every three years and is still working on its latest.

At a virtual public workshop held May 20, TEP came under pressure from many environmentalists and other green energy backers to switch from coal and natural gas to renewables much sooner than 2050.

Environmental groups pushed for proposals to retire all coal-fired plants from which TEP still gets power by the 2020s. They want more emphasis on energy efficiency.

The Southwest Energy Efficiency Project, a nonprofit public interest group, presented results of a study that found a better use of energy efficiency could save TEP 35% to 40% in total costs as soon as 2030.

What’s more, if the utility ran its coal-fired power plants only at times of the day when it makes economic sense, the group’s study concluded TEP could save even more, up to an additional $250 million, said Caryn Potter, a program associate for the group.

As the utility runs its coal plants today, they “must run” even regardless of how that affects TEP’s additional costs per each unit of power generated, Potter said.

“We as a country and utilities such as TEP bear a greater responsibility to do more because of our historic emissions,” which have been much higher proportionally than those of many other nations, said another speaker, Sandy Bahr, of the Sierra Club.

“We think part of the TEP plan should be to invest in coal-affected communities and a transition to renewables,” Bahr said. “There should be a greater siting of renewables in areas where fossil fuel plants are being retired.”

Seniors need electricity to be affordable

But speakers representing Davis-Monthan Air Force Base, a local architecture firm and the Pima Council on Aging said going greener must be balanced with costs.

“Seniors are particularly vulnerable. Arizona marketed itself as an affordable place for retirement and the main challenge to future expenses is that seniors are unable to increase retirement income. Most are dependent on Social Security, living just above the poverty level,” wrote Rene Pina, representing the Pima Council on Aging and AARP, in an email to TEP.

Agreeing with some of the environmentalists’ views were two University of Arizona researchers. They were part of a UA team paid $100,000 by TEP to help chart a greenhouse gas reduction course. They looked at 24 options, many calling for reducing emissions by up to 80% of 2005 levels by 2050.

Some proposals start cutting carbon use and emissions much sooner.

“Emissions reduction targets that don’t account for the timing of those reductions could lead to higher emissions and more warming despite hitting the target,” said UA assistant research professor Ben McMahan. “How you get to those percent reductions targets is just as important as the targets themselves.”

The researchers also offered a cautionary note about the proposals’ ability to meet the goals of the 2015 Paris Climate Accord. They studied climate impacts of proposals offered by TEP and a wide range of interest groups and agencies, using the assumption that all utilities and other major electric users in this country would reduce their emissions by the same amount as TEP.

UA researchers concluded none of the proposals would keep temperatures from rising less than 1.8 degrees Celsius, or 3.24 degrees Fahrenheit.

Not one “is consistent with a 1.5 degree world,” the scientists said.

Autumn Johnson, representing Western Resource Advocates, said she’s “a little disappointed and dismayed” at that finding, adding, “I’m not ready to concede it.”

Nationally, coal is losing ground to solar and other renewables. On May 28, the U.S. Energy Information Administration reported that the country’s annual renewable energy consumption exceeded that of coal in 2019 for the first time in more than 150 years, when wood was a primary source of energy.

TEP paid the UA to conduct a two-part study. Besides analyzing emission reduction plans, UA researchers wrote a paper looking at what commitments other utilities have made to reduce greenhouse gas emissions and comparing TEP’s energy sources with other U.S. utilities.

They found TEP got 87% of its electricity supplies from coal and natural gas in 2019, while 8% came from renewable sources.

“They are a pretty high carbon producing utility. They wanted to set a goal for reducing greenhouse gas emissions. They had no idea how to do it. They wanted to do it scientifically. They didn’t want to just pick a number out of the air,” said UA professor Andrea Gerlak, one of three co-authors of the paper looking at other utilities.

“TEP is the primary producer of fossil fuel-based generation, and is the only Fortis utility that uses coal for energy production,” wrote the Canada-based utility holding company.

It’s also agreed to add 500 megawatts of renewable energy with a new solar project on Tucson’s southeast side and two new New Mexico wind projects. That will bring renewables to 30% of TEP’s supply by 2021.

Gerlak said she sees a culture slowly shifting at TEP toward more openness and emphasis on environmental sustainability.

“The corporate people came to town and wanted to meet with us,” Gerlak said. “They wanted to know how can they get greener, what are we thinking about electric vehicles? Our conversations were never like that in the past.”

Sierra Club: Retire all TEP coal use by 2028

Sandy Bahr of the Sierra Club agreed the utility has come a long way. She was one of a number of environmental advocates, public officials and business and consumer representatives TEP appointed to serve on a committee to advise the utility about the various proposals. The committee met regularly through much of 2019.

“It was not all that long ago that none of the Arizona utilities would talk about climate change, but when TEP talked to the corporation commission about this (resource) plan, they talked about climate emissions and climate change,” said Bahr, director of the Sierra Club’s Grand Canyon chapter.

The Sierra Club’s proposal would retire all TEP coal use by 2028 and shut a unit of TEP’s Springerville Generating Station by 2025.

“It’s clear that doing earlier retirements gets you among the best results, as far as cumulative emissions reductions,” Bahr said.

Another proposal from large industrial TEP customers would have them buy power — type not specified — on the open market instead of from the utility.

Western Resource Advocates made two proposals, to reduce utility emissions by 60% and 70%, respectively, from 2005 levels by 2035.

Overall, utility spokesman Barrios said this resource plan will require TEP to “consider a variety of conditions that can’t be predicted with certainty. Will customers’ energy needs remain flat or grow in the future? Will the cost of natural gas remain low or increase in the future? And how might these combinations of conditions affect customers’ bills?”

Other speakers at the May 20 workshop said the utility must always rely on a robust mix of energy sources.

“If anybody’s ever gone to a casino, you’ve got this game called roulette, where you can place bets on different numbers on a wheel. It makes sense to put some bets on red and black and not all on black 22,” said Rob Lamb of the local firm GHLN Architects and Engineers.

While Davis-Monthan has installed a lot of solar energy on base, the Defense Department’s main energy goal is resilience: ensuring it has backup power in case there are problems with wind and solar sources, said Krivokapich.

“Make sure as we go into this green portfolio that we keep it cost effective,” he said. “Don’t spend all our money at once to get breakthrough technology.”

Nicole Fyffe, a top aide to Pima County Administrator Chuck Huckelberry, endorsed the idea of reaching 100% clean energy by 2050 and 50% by 2030.

While she said she appreciates the Sierra Club proposal to shut down all of TEP’s coal plants, Fyffe is concerned that could result in higher nitrogen oxide emissions locally if the utility replaces coal with natural gas sources.

She also wants to make sure the TEP plan pays close attention to rate impacts on county taxpayers who pay electric bills.

A gain in electricity use by residents didn't offset a sharp decline in use by commercial and industrial customers.

TEP home customers could see credits totaling about $11 through June.

Commercial customers of TEP can get incentives of up to 85% of the cost of installing electric vehicle charging stations.

The number of confirmed coronavirus cases across Arizona is 27,678, the Arizona Department of Health Services said.

Tucson Electric Power customers aren't likely to see any rate increases until October at the soonest, as added hearings and the pandemic have delayed the utility's rate case.

In a dramatic policy shift to reduce greenhouse gas emissions, and also for economic reasons, Tucson Electric Power says it will stop using coal to generate electricity by 2032 and will increase renewable energy's share of its energy load to more than 70% by 2035. The plan will require 1% annual electric rate increases a year to put into effect.

August was Tucson's hottest month on record —and summer 2020 also set the all-time record for heat.

Watch now: Old Tucson has closed, but its moviemaking history lives on

Tucson Electric Power is close to releasing a plan that further boosts its commitment to reducing reliance on coal and natural gas in favor of renewable energy sources like solar.

Tucson Electric Power’s coal-fired Springerville power plant has been in operation since the 1980s. A Sierra Club proposal calls for TEP to shut one unit of the plant by 2025.

These turbines are part of the Red Horse 2 wind and solar project near Willcox, which supplies energy to Tucson Electric Power.