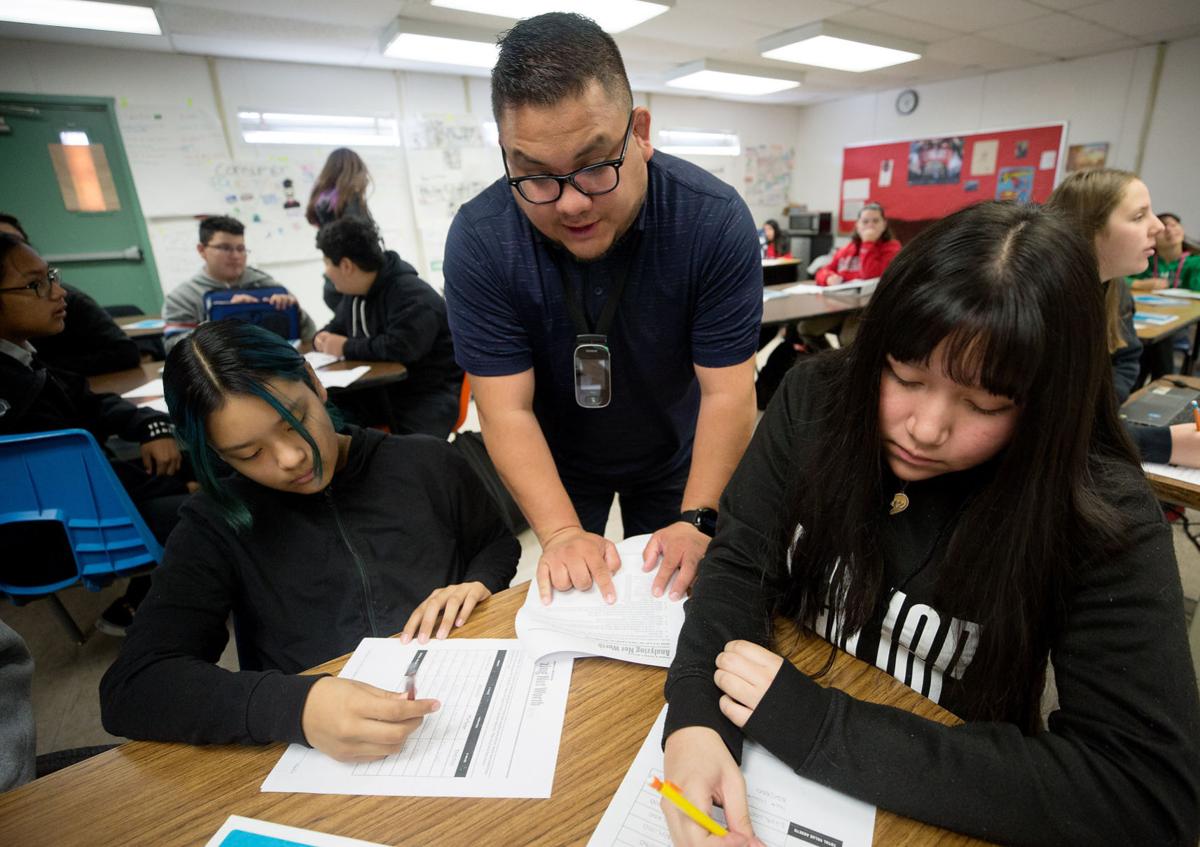 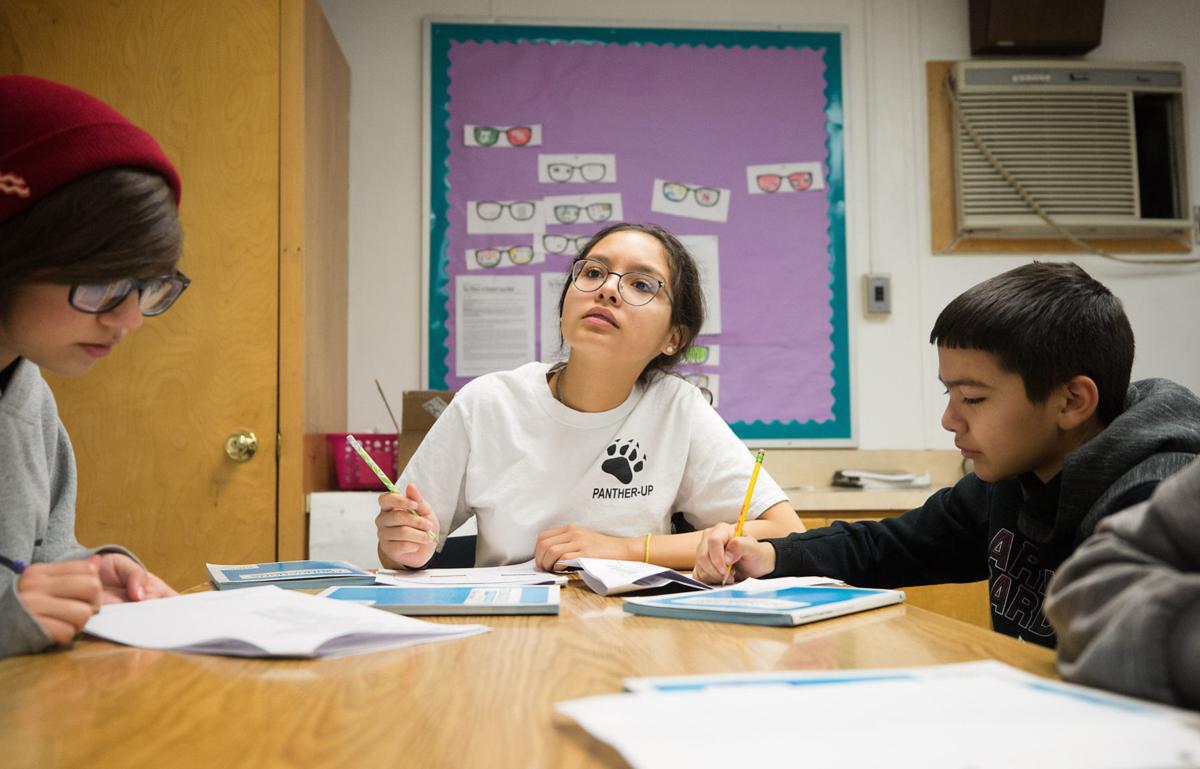 Nereyda Retana, 13, center, looks at the board as Tiffany Uriarte, 13, left, and Jesus Gomez, 13, continue with their work during a financial literacy class at Pistor Middle School, 5455 S. Cardinal Ave., on Feb. 6, 2020. The class covers financial terms and definitions like the difference between stocks, bonds and mutual funds. This is the first year this class is offered to students. 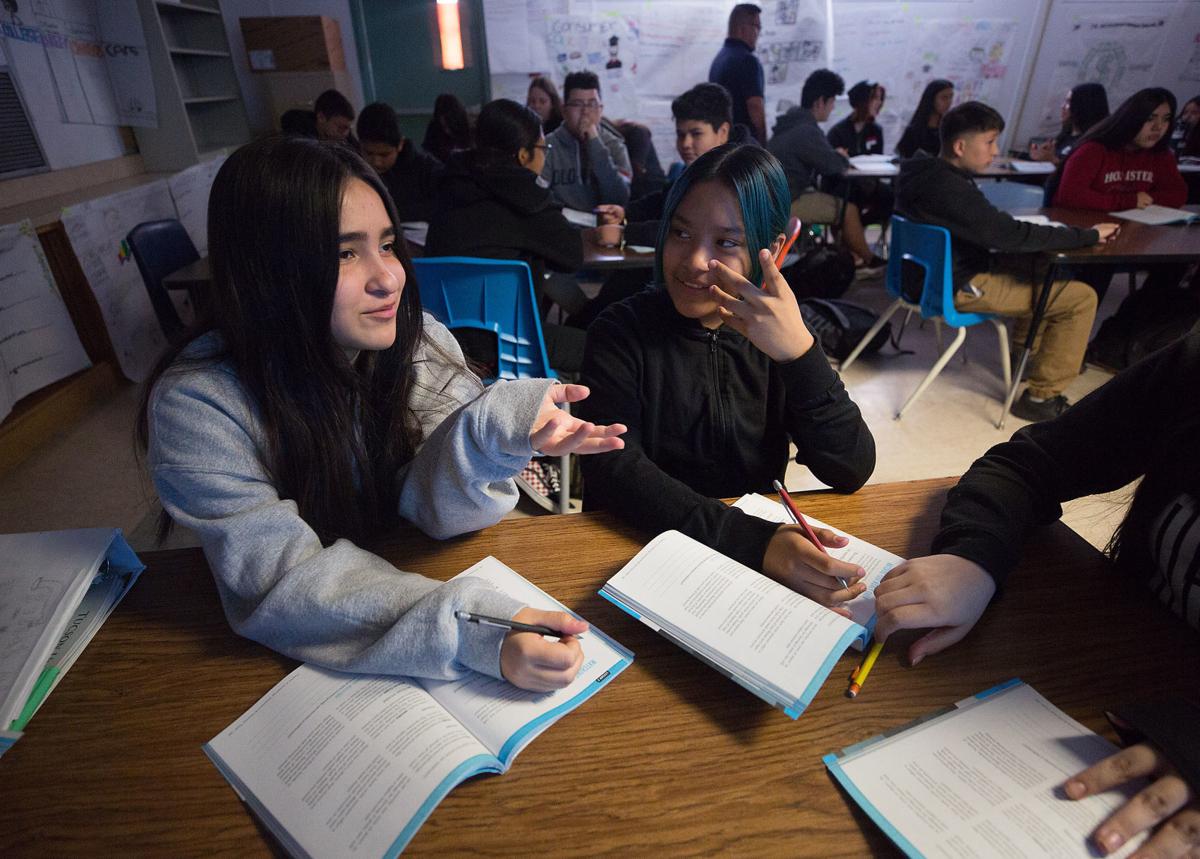 At Pistor Middle School, students are introduced to concepts like inflation, compound interest and liquid assets. They learn how to invest and avoid debt, thanks to teacher John Garza.

By Sasha Hartzell For the Arizona Daily Star

Would you rather have $1 million right now or a penny that doubles every day for a month? This was the question that John Garza asked his 29 students before diving into a lesson on the merits of investing.

Hand-drawn posters titled “The United States of Consumer Education” and “From Poor to Rich” lined the walls of Garza’s Tucson classroom as he discussed bonds, liquid assets and deductibles.

“Who has heard of mutual funds?” he asked the class. A few hands tentatively went up. “Who knows what it means?” The hands shot back down. The course was consumer science. The students were 12 to 14 years old.

At a school where over 80% of students qualify for free or reduced lunch — an indicator of poverty, there may be no such thing as “too early” to prepare for the future, according to Pistor’s principal, Elizabeth Rivera-Russell.

“The goal is for all of our students to have a better life than we did,” she said.

That’s where Garza comes in.

In designing the yearlong elective from scratch, Garza said he created content to meet the needs of the modern student.

Class projects include calculating the salary for their dream career, researching median incomes and property values in various areas, and estimating the cost of their future bills.

The students are introduced to concepts like inflation, compound interest and liquid assets. They also learn how to invest and avoid debt.

For some parents, the course sparks hope.

“If we can get these kids to start thinking about their future economic status, we really can break the cycle of poverty,” said Jennifer Lee, the mother of an eighth-grader in the course, Sierra Titus.

Lee said the course helped Sierra buckle down on choosing a high school and has made her more aware of the cost of living.

For Christmas last December, Sierra asked for a debit card. She wanted to start saving.

The new law was part of an effort by State Treasurer Kimberly Yee, who said financial literacy is a priority for her administration.

“If we don’t teach students early on, they become adults that can’t manage their money,” Yee said, calling Pistor’s move to offer the class “wonderful.”

The course isn’t just serving students. Seeing the program roll out from its conception is also fulfilling for Garza.

“If I could envision a perfect job, this is it,” he said, though just four years ago he never could have imagined it.

In early 2019, Garza’s certification was set to expire, but Rivera-Russell didn’t want to lose him, saying he’d become a role model for many of the kids.

Rivera-Russell had identified a deficit in Pistor’s elective offerings. When she discovered Garza’s degree was in aviation business, the idea clicked. Together, the two created the consumer course.

Though Garza said he was scared at first and had no formal training, he had a wealth of experience to drawn on.

“I was one of these kids,” he said, having grown up nearby.

“I’ve dealt with everything not to do.”

After creating all of his own lesson plans, Garza was able to petition the TUSD Governing Board for course materials, and now the elective is near capacity.

So what’s the answer to the million-dollar question Garza posed to his students?

One penny, doubled every day, will become $5.3 million by the end of a 30-day month.

One hundred and thirty-one miles of paved path wrap around Tucson, connecting cyclists, walkers, and even horse-back riders across the city. Yet, despite being highly accessible, key communities, on Tucson's south and west sides specifically, aren't necessarily connecting with the Chuck Huckleberry Loop that passes directly through their neighborhoods.

Opportunities for a successful, long life lacking for many Tucson kids, study says

Tucson came near the bottom for overall child opportunity and the proportion of children in low-scoring neighborhoods, says the study rating neighborhoods and chances for success within the country's 100 largest metro areas.

Beyond TV dramas: Tucson students get firsthand look at the justice system

About 300 students at Amphitheater High School got to watch oral arguments in a murder case appeal.

$7M budget deficit forces Sunnyside to cut teachers, staff across the board

The district attributes the shortfall to a decline in student enrollment and its inability to get a budget override passed by voters last fall.

Even with the restoration of additional assistance funds, Tucson-area school districts say they have a lot of catching up to do after years of state-level cuts.

This young mariachi group has the skills, now they need to complete their look ahead of a major competition.

A new school will open at TUSD's former Wakefield campus

The school — a middle school, which may be renamed — will operate as a “lab school,” designed to improve racial integration and to prepare traditionally underserved students for advanced learning experiences.

Two Republican lawmakers declined to go along with a proposal by one of their own.

Citing expense, TUSD cuts number of IOUs kids can have for meals

The Tucson Unified School District says it worries letting kids eat without paying could add up to a $1 million bill by the end of the school year.

The district's incoming leader is in his fifth year as superintendent at Humboldt Unified School District in Prescott Valley.

Nearly a third of Tucson High Magnet School's students are involved in the music program.

The A-rated school, which is also a home to various farm animals, encourages kids to learn at their own pace.

For now, local schools are focusing on hygiene and encouraging sick children and staff to stay home. Officials say school closures could have severe and adverse impacts.

For the past 17 years, the casitas have offered independent — but supported — living for more than five dozen at-risk seniors at a time. Now, the nonprofit that runs them is struggling to find funds for much-needed repairs.

Nereyda Retana, 13, center, looks at the board as Tiffany Uriarte, 13, left, and Jesus Gomez, 13, continue with their work during a financial literacy class at Pistor Middle School, 5455 S. Cardinal Ave., on Feb. 6, 2020. The class covers financial terms and definitions like the difference between stocks, bonds and mutual funds. This is the first year this class is offered to students.

At Pistor Middle School, students are introduced to concepts like inflation, compound interest and liquid assets. They learn how to invest and avoid debt, thanks to teacher John Garza.