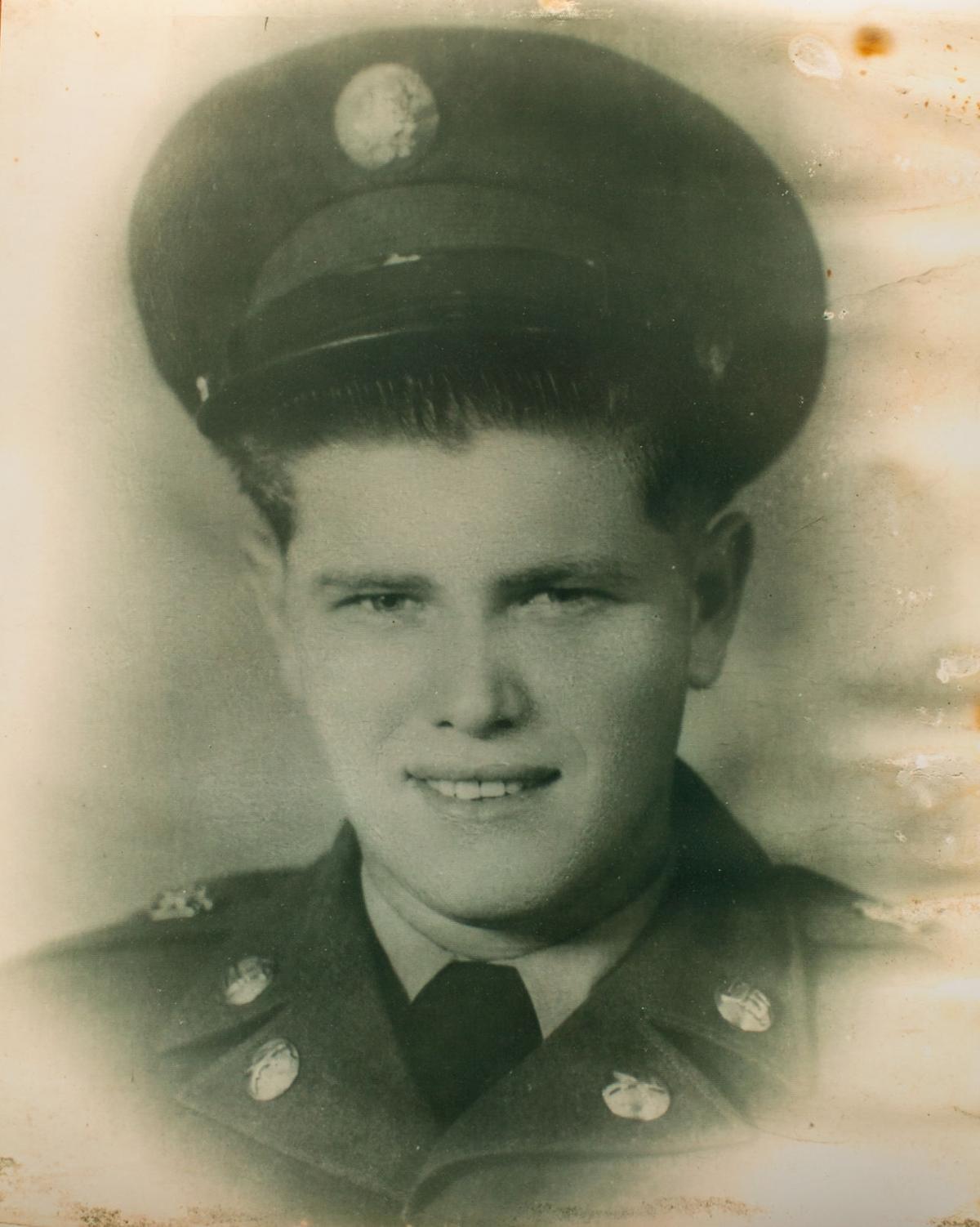 Glenn E. Collins was 21 when he was killed in Korea. 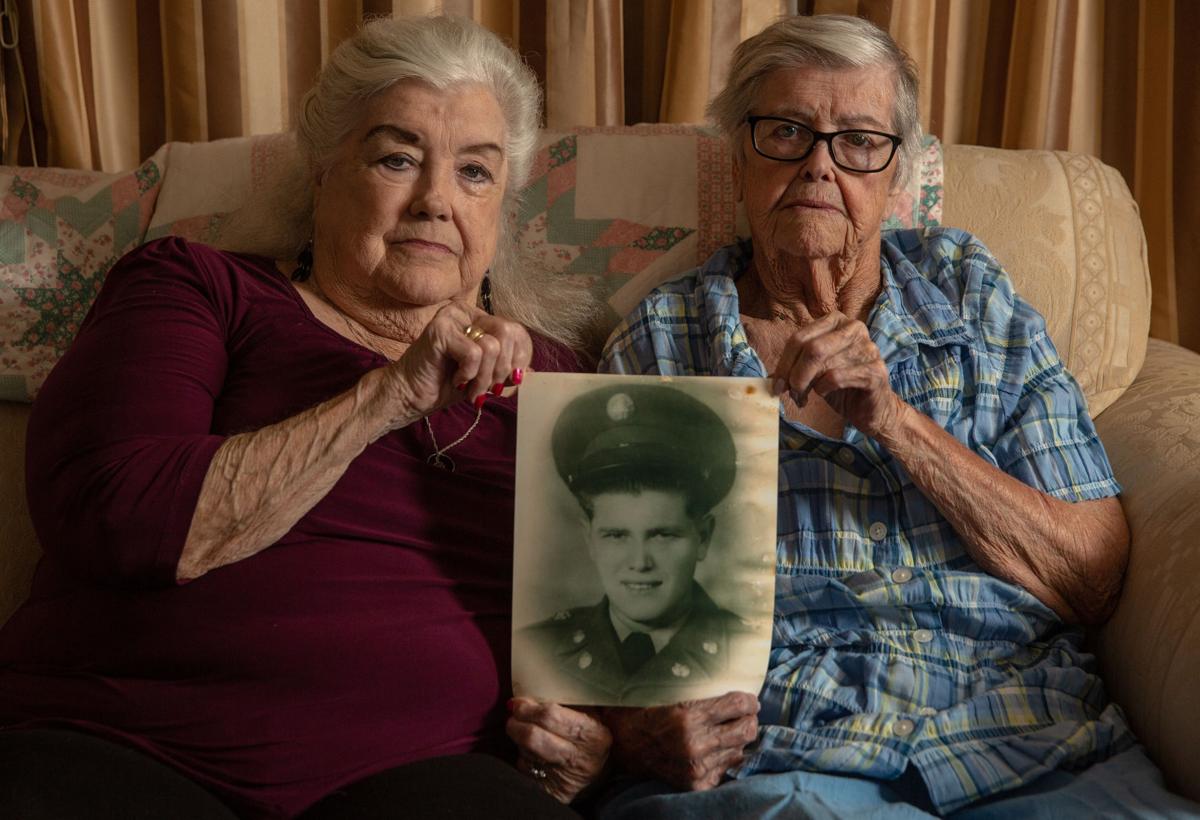 Sisters Kathern Ballentine, left, and LaWanda Brothers hold a photo of their brother, Glenn E. Collins. Brothers says Collins took care of the family when their parents were at work.

LaWanda Brothers is relieved that her brother and “best friend” will be coming home in the fall to be laid to rest.

The remains of Army Pfc. Glenn E. Collins, who was killed at the age of 21 in the Korean War, were identified in April. He was reported missing in action on Dec. 2, 1950, when his unit was attacked by enemy forces near the Chosin Reservoir, North Korea. Years later he officially was declared dead.

“We have prayed and cried for 70 years, and now he will be coming home,” said Brothers, 86.

Brothers and her sister, Kathern Ballentine, 78, are the remaining survivors of Collins’ immediate family. In the fall, the sisters are planning a service for Collins in the chapel at Funeraria del Angel South Lawn, and a burial will follow at the cemetery at 5401 S. Park Ave.

Collins will be buried where his parents and more than 80 relatives are laid to rest.

“He was a wonderful brother who helped take care of the family when my parents were at work. Our dad was working at Edwards Air Force Base and our mom worked at a cannery,” said Brothers, who was 13 when Collins, 19, enlisted in the Army in California. She said Collins was born in Marshall, Texas, and the family moved to Tucson and then to Tranquility, California, because their father worked construction jobs. The family eventually returned to Tucson and remained.

“I hated arithmetic and he would do it for me if I would wash the dishes for him,” said Brothers, explaining why she didn’t learn much math in the sixth grade. He cooked our meals of fried potatoes, meat and vegetables, and my mom baked the bread,” she said.

The sister also remembered the family attending religious services at tent revival meetings, and Collins learning to sing while another brother played the guitar. “Power in the Blood” was one of his favorite songs.

Once in the Army, Brothers said she wrote to Collins often. “He answered me and would say ‘take care of mom and dad. Tell them I love them. I will come home when I can,’” she recalled.

Brothers said she still can picture the day her mother received the Western Union telegram giving her the news that her son was declared missing in action.

“She was doing laundry and they came out and delivered it to her. She opened it up and sat and cried. She gathered all of us and told us about it.

“We still had hopes that he would be found and be OK. Dad was working and he didn’t know until he got home that evening. We all cried that night together,” said the sister, remembering that years later her parents received medals from the Army honoring her brother posthumously.

Brothers said she holds dear a portrait of her brother before he joined the service, one of a few photos left after a fire destroyed many mementos.

In late 1950, Collins was a member of Heavy Mortar Company, 1st Battalion, 32nd Infantry Regiment, 7th Infantry Division when he was reported missing in action after his unit was attacked by Chinese communist forces near the Chosin Reservoir.

Specific details about Collins’ death were unknown at the time, but later it was found that Collins was killed during the attack. His remains were not found or recovered after the battle, officials said.

Collins and his squad started battling the Chinese on Nov. 28, 1950. “There were several nights of attacks and the soldiers were sent in to replace Marines who were being moved to different positions,” said Jeannette Gray of the Department of the Army.

“His unit was surrounded by the Chinese and they battled for days before they began to move out from the northeastern corner of the Chosin to south of the Chosin,” Gray said. She said soldiers were trying to keep the Chinese from advancing further, and Gen. Douglas MacArthur had announced he wanted all the troops home by Christmas, not anticipating the number of Chinese involved in the area.

“U.S. troops were outnumbered 1-to-10 and it was minus-30 to minus-50 degrees at night, and weapons were jamming and malfunctioning because of the weather. It was pretty horrific. The soldiers did not have winter uniforms, and many were sick with pneumonia and other cold-weather injuries,” Gray said.

When soldiers made it out of the area to a Marine camp, 1,500 were air-evacuated to field hospitals, and only 385 were considered fit for duty, said Gray.

She said Collins’ remains came from a mass burial site on the Chosin Reservoir near Sinhung-ri.

On July 27, 2018, after the summit between President Trump and North Korean leader Kim Jong Un in June 2018, North Korea turned over 55 boxes of remains of American service members killed during the Korean War, said officials.

Some of the returned remains were recovered from an area where Collins’ unit had fought the Chinese forces on the eastern side of the Chosin Reservoir, state records show.

The remains arrived at Joint Base Pearl Harbor-Hickam, Hawaii, on Aug. 1, 2018, and were subsequently recorded into the Defense POW/MIA Accounting Agency’s laboratory for identification.

Collins’ name is recorded on the Courts of the Missing at the National Memorial Cemetery of the Pacific in Honolulu, along with the others who are still missing from the Korean War.

A rosette will be placed next to his name to indicate he has been accounted for, said officials.

Tucson mother, daughter shared their lives, then COVID-19 struck both

Diane Castro battled virus for weeks at same Tucson hospital where she had to say goodbye to her mother.

Forced separations have families using phone calls, video chats and waves from a distance to keep in touch with loved ones in care facilities.

Glenn E. Collins was 21 when he was killed in Korea.

Sisters Kathern Ballentine, left, and LaWanda Brothers hold a photo of their brother, Glenn E. Collins. Brothers says Collins took care of the family when their parents were at work.